Islamization and de-christianization of the Middle East 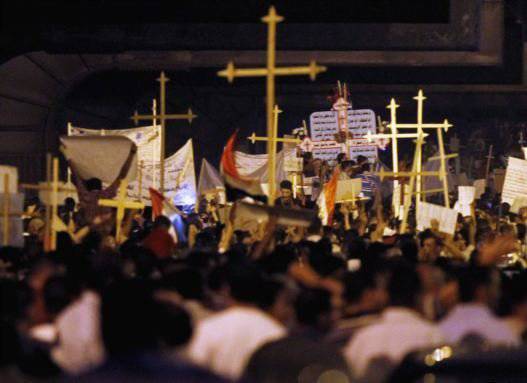 Interestingly, the most important factor in reducing the proportion of Christians in the population of the Middle East region was the war in Iraq, which was unleashed by the United States and NATO.

When the regime of Saddam Hussein, in which Christians lived relatively normally, was overthrown, the radical Islamists accused the Christian community of Iraq of collaborationism, they began to call them accomplices "crusaders" and "assistants of the American troops." Attacks on Christian temples, their explosions, murders, beatings and kidnappings, not to mention such “nonsense” as threats against Christian community leaders and ordinary people, have become commonplace in Iraq. A century later, medieval Jizya was restored in Iraq: a special tax for Christians, which sometimes amounts to hundreds or even thousands of dollars.

The main factor that led to the elimination of the Christian segment in the population of Iraq, was the invasion of NATO. Experts note that under Saddam Hussein, Christians in the state lived well. Most of them were well educated, the majority belonged to the middle class of the country. Christians lived mainly in large cities - Mosul, Basra and Baghdad. A Baghdad urban Christian community before the war was considered the largest in the entire Middle Eastern region.

After 2003, freedom was formally proclaimed in Iraq, including religious freedom, but in reality, the country's Constitution contains statements that prohibit the adoption of laws contrary to Islamic law (Sharia). Sharply increased religious intolerance.

After the second Lebanese war (2006 year) in Lebanon, the Shiite radical Hezbollah movement, the Christian-Maronite community, which had previously ruled the country, had lost its hegemony significantly strengthened its position. Since that time, more than 60 thousands of Christians have left the country, and according to surveys, about half of Maronite Christians are ready to leave Lebanon.

The growth of radical Islamist sentiment that has been going on since 2003, after the beginning of the disturbances in the winter and spring of 2011, in the Arab world, further complicated the situation around the Christian communities.

Conflicts of Muslims and Christians occur regularly in Egypt. Only in 2011, there were mass killings in May and October. In Egypt, for Christians, the "Iraqi scenario" began to materialize; after the fall of the Mubarak regime, which held back radical sentiments, more than 100 thousand Christians left the country, tens of thousands more were ready to leave before the end of the year. It is clear that after the victory of the Islamists in the elections, the flight will further intensify.

In Libya, the head of the Transitional National Council, Mustafa Abd-el-Jalil, said that the basis of the country's legislation will be Sharia, so the laws that contradict it will lose their force. As examples, he cited laws that allow divorce and prohibit polygamy. After a negative reaction from the EU countries, Jalis tried to soften his words, but it is clear that Libya’s policy towards Islamization will continue.

The only island of stability remained Syria, where the Assad regime (belonging to the Alawite community) created a coalition counterbalance from religious minorities against the Sunni majority. But apparently, after the start of unrest in this country, Christians came under attack, and there the leaders of the radical Islamists had already put forward the slogan of creating a clean country from the Christians.

October 23 in Tunisia held elections to the National Constituent Council, and they (the elections) in many respects can determine the vector of the country's movement for the near future. The moderate Islamist party “Renaissance” gained a confident victory on them, she received 39% of the votes. The second and third places were taken by the Democratic Forum for Labor and Freedoms and the Republican Congress.

Its leader Rashid Gannushi spent more than 20 years out of Tunisia in exile due to disagreement with the country's leadership. He returned to Tunisia only in January of this year, immediately after the victory of the revolution and the overthrow of President Zine el Abidine Ben Ali.

In the coming year, parliamentarians should form a new government, create a new constitution for the country, and prepare presidential and parliamentary elections. According to the president of the Institute of the Middle East, Yevgeny Satanovsky, there is no doubt about the future of Tunisia, there will gradually "be introduced Sharia."

In addition, Tunisia will be under great pressure from neighboring countries, where secular regimes were also overthrown - Egypt and Libya, which follow the path of Islamization even faster. Plus, the crisis in the EU countries, which were key partners of Tunisia. From their side there will be no serious investments, the economic situation in the country will deteriorate, foreign trade will decrease, the flow of tourists will continue to fall. And the economic crisis will further strengthen the position of the radicals. The positions of Qatar, Saudi Arabia and Turkey will be strengthened.

The time of secular regimes in North Africa and the Middle East is becoming a thing of the past, the region is in a storm zone for many years. In North Africa, only Algeria remains a rock in the raging sea, because the Moroccan king is increasingly inferior to the local Islamists and is ready to join the monarchist coalition led by the Saudis.

Therefore, if the Tunisian party “Revival” does not cope with the Islamization of the country, there is no doubt that it will be “helped” from the outside.

We are in Yandex Zen
Genocide of Christians in the Middle East. Millions of people have become a bargaining chip for American geopolitics
Geopolitical mosaic: Putin street appeared in Bethlehem, and Hillary Clinton dismissed her hair
58 comments
Information
Dear reader, to leave comments on the publication, you must to register.