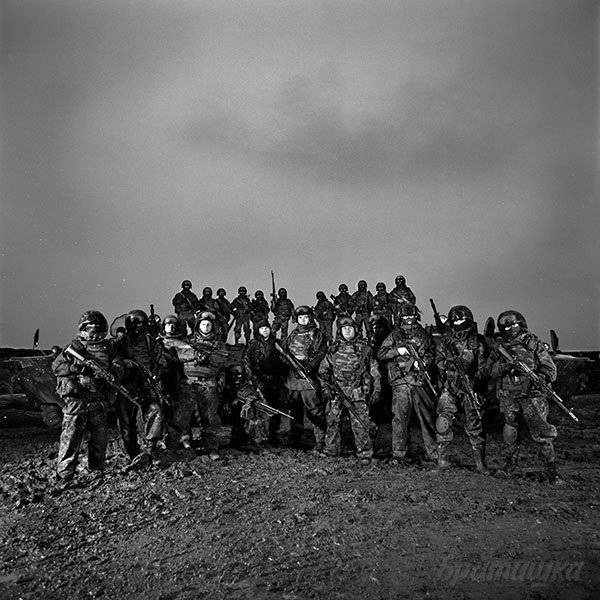 Group portrait of fighters of a separate reconnaissance battalion of special forces (ORB-242) of the MVD of the MVD, stationed on a permanent basis in Ingushetia and regularly participating in special events in the Caucasus. 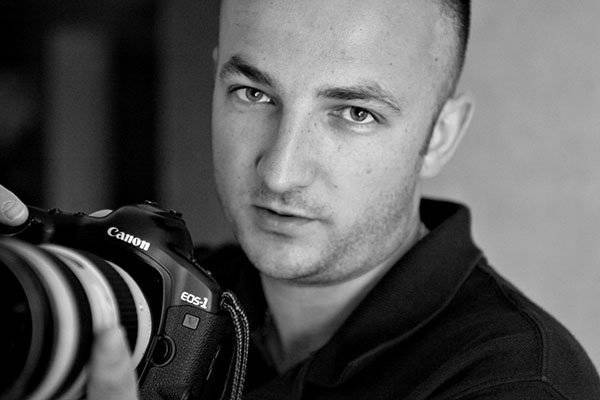 Photographer Dmitry Belyakov performed more than 40 art portraits of former secret officers from various detachments of the Soviet and Russian Special Forces, who passed through Afghanistan, Chechnya, and also participated in famous anti-terrorist operations in Moscow, in the Dubrovka theater and during the Beslan events. All the portraits were filmed in a studio, with a staged light, on a black and white film, on a classic, medium format, mechanical Hasselblad camera. 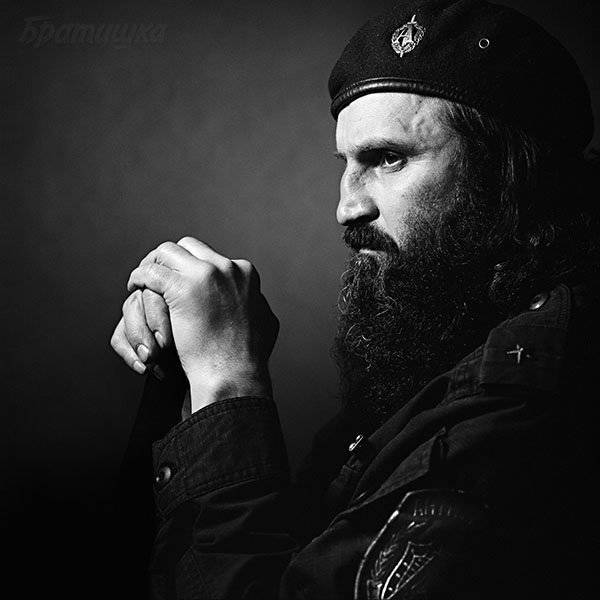 Yartsev Vyacheslav, captain of the KGB special forces. He worked at Alpha from 1980 to 1991. After combat training in Afghanistan, he took part in several anti-terrorist operations. Coach in karate, kick boxing and hand-to-hand combat. He received a higher spiritual education, having graduated from St. Tikhon's University, a department of military personnel and helps in one of the Moscow churches. 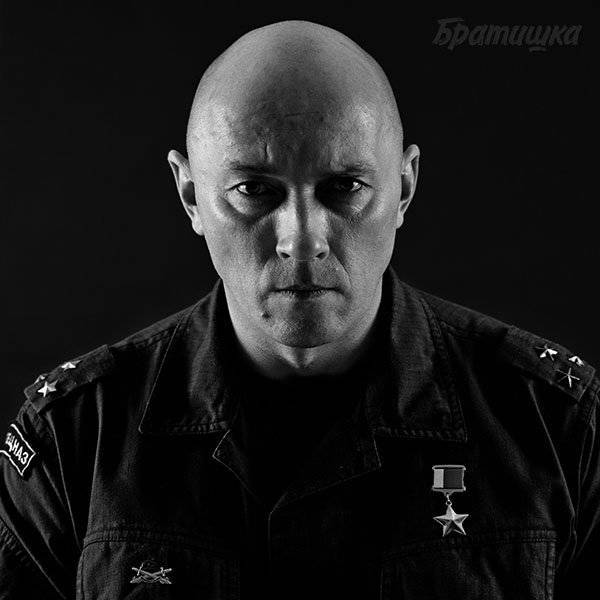 Yushkov Sergey, Colonel of the Special Forces of the Ministry of Internal Affairs, “Krapovik”, Chief of Intelligence of the Special Division No. XXUMX “Rus”. Veteran of both Chechen campaigns. Had a reputation as one of the most experienced and competent special forces. He was among the very first group of officers who were awarded the Golden Stars of the Heroes of Russia by Vladimir Putin for the courage shown in the battles in Dagestan, namely in the Kadar zone. 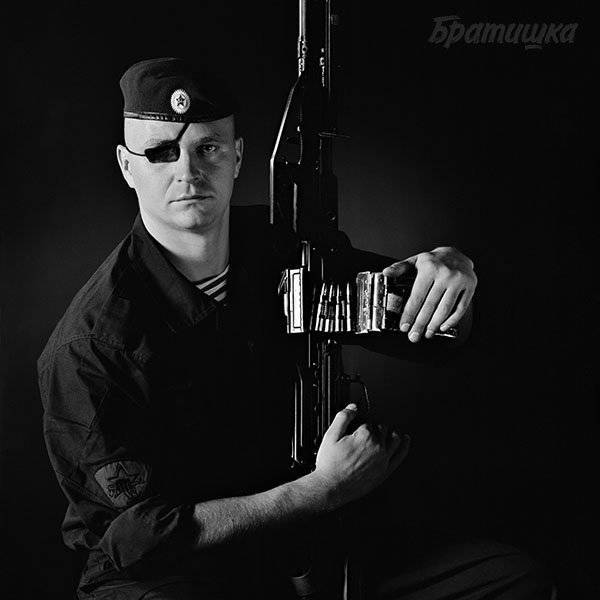 Boldyrev Andrey, senior lieutenant, machine gunner, "krapovik". Veteran of the 2 th Chechen campaign. He fought in the OSN No. 20, during an ambush organized by militants in the autumn of 2000 on Staropromyslovskoye highway in Grozny, Andrei received a shrapnel wound to the head and lost his right eye. The officer refused to retire, managed to adapt and learned to work as a machine gunner, aiming with a healthy eye. 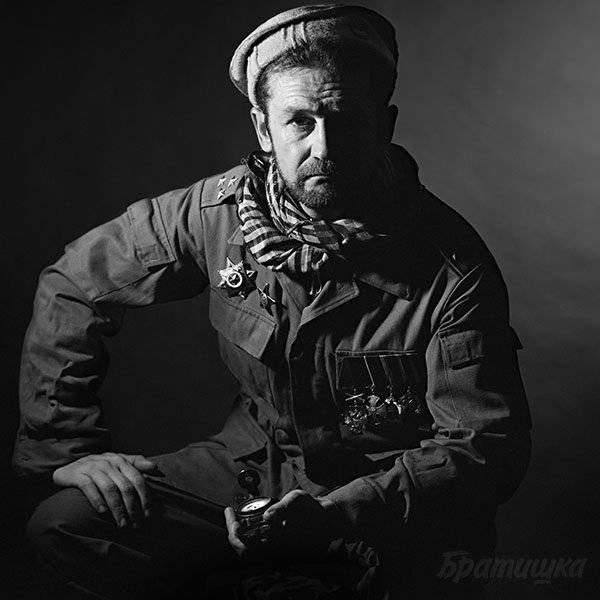 Musienko Alexander, colonel special forces GRU. He fought in Afghanistan, Tajikistan and Chechnya (during the 2 campaign). In Afghanistan, during 2 years, he commanded a group of 1 squadron of the 154 squad, special forces of the GRU, and was a deputy commander of the 334 squadron squad, who effectively worked during ambushes on caravans with weaponsfrom Pakistan and raids on the strongholds of the Mujahideen. In Tajikistan, Musiyenko led the partisan movement of the Popular Front. In Chechnya and Dagestan, he developed and was directly involved in operations to eliminate three field commanders from among the most odious. For almost 20 years of military life, he participated in more than 150 combat operations. 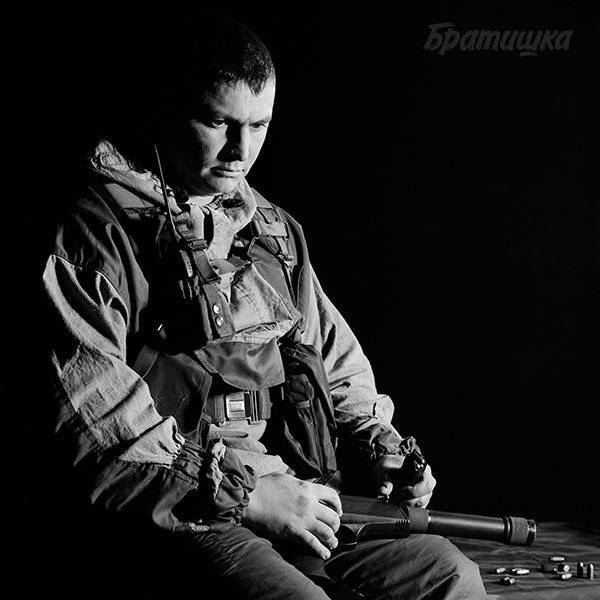 Illarionov Sergey, Major of the Special Forces of the Ministry of Internal Affairs, Senior Assistant Chief of Staff for Special Operations of the Special Operations Unit No. 7 "Rosich". "Krapovik", a veteran of two Chechen campaigns. He passed the way from private to the commander of the group. Took part in a large number of secret and special operations. In March, 2000 during the siege of Komsomolsk, in an ambush organized by Gelayev’s militants, the entire reconnaissance team of the detachment was killed. Total lost 22 fighter. Illarionov, who was then the head of the group, together with the four ordinary special forces, voluntarily and without weapons went to the militants to negotiate for the extradition of their dead bodies, driven by the sacred rule in force in the war - the special forces are not abandoning. 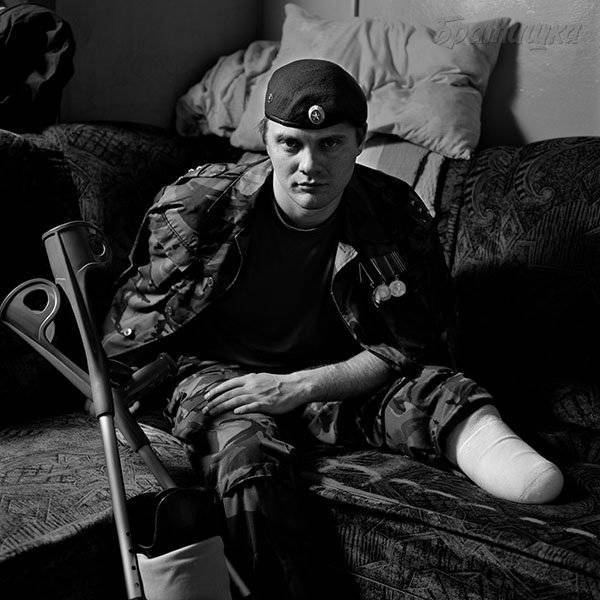 Pelikhov Andrey, captain of the special forces of the Ministry of Internal Affairs, deputy commander of the OSN group No. XXUMX "Rus". "Krapovik." He took part in a large number of secret and special operations, including in the rescue operation during the Beslan events. He was awarded the Order of Courage for displaying self-control and composure during a mountain raid in the mountains of eastern Chechnya in 8, where the group went to an old minefield while searching for the militants' forest base. After the detonation of an anti-personnel mine, Captain Pelikhov did not lose his temper, but independently provided first aid to himself and, until the helicopter arrived, he continued to direct the actions of the group, taking comrades out of the dangerous area. Captain Pelikhov had the right to receive an apartment out of turn, as he was seriously wounded on a service mission (SBK), but this was denied to him under a false pretext. For several months, the captain lived in the dorm room and in the barracks of the detachment, which he was forced to release due to the disbandment of the unit itself. Now Pelikhov is suing the state for an apartment. 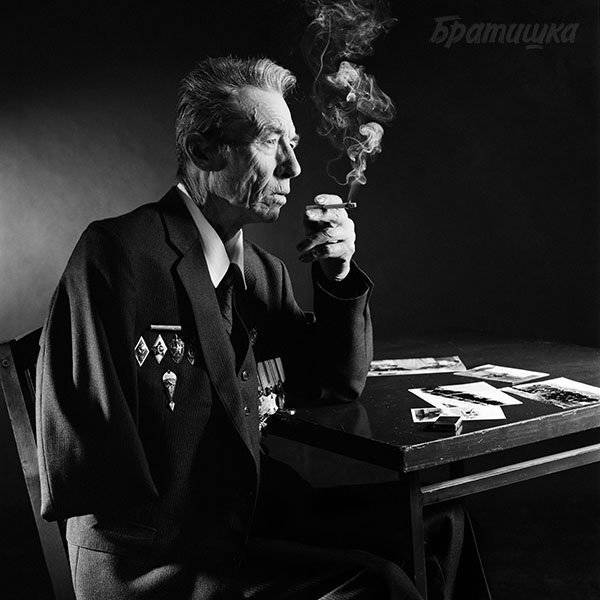 Emyshev Valery, colonel special forces of the KGB. He worked in the KGB from February 1966 to 1988 year. As part of the first set of "Group A" since July 1974, the operational cover is a fitter at the housing and operational office. Took part in many secret and special operations. Member of the Kabul operation, stormed the Presidential Palace. The commander of the assault team lost his right arm during the battle. By decision of Andropov he was appointed party organizer - secretary of party organization of group “A”. 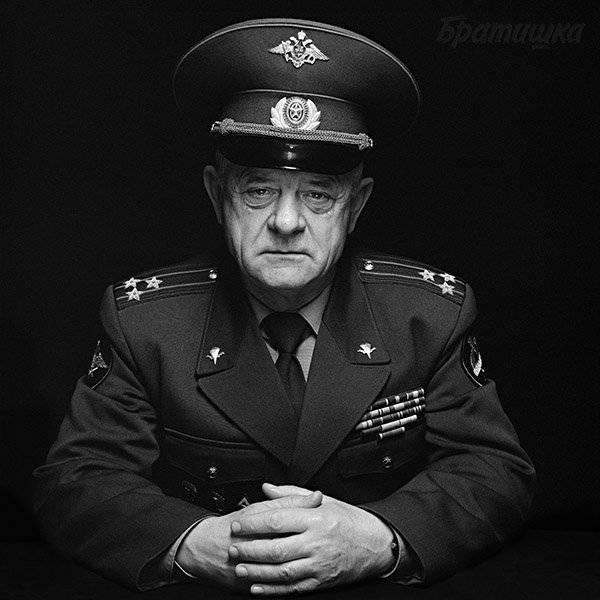 Kvachkov Vladimir, Colonel of the General Staff, commander of the 15 brigade of GRU special forces, author of a secret monograph on the military-strategic issues of the theory of special operations, a veteran of the Afghan campaign, an active participant in the events in Tajikistan and one of those who brought E. Rakhmonov to power. During the civil war in Bosnia, he provided advice to the Bosnian Serbs. Consultant to the United State Security Command in Chechnya on 1999-2000. The main suspect in the criminal case about the organization of the attempt on the life of the “author of privatization” A. Chubais. 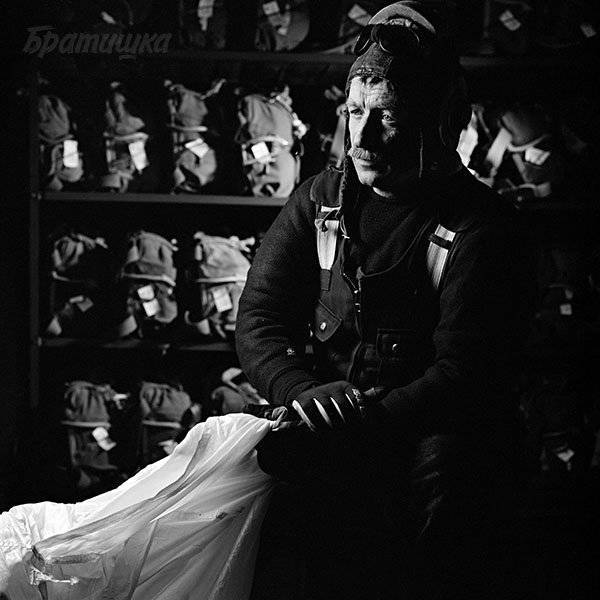 Vladimir Titov, served urgently in the DRA as a part of a reconnaissance company 345 separate parachute regiment (OPPA) Airborne Forces. During his service, he took part in a large number of combat, reconnaissance operations in the rear of the Mujahideen formations and was awarded the Medal For Bravery and presented to the Order of the Red Star. 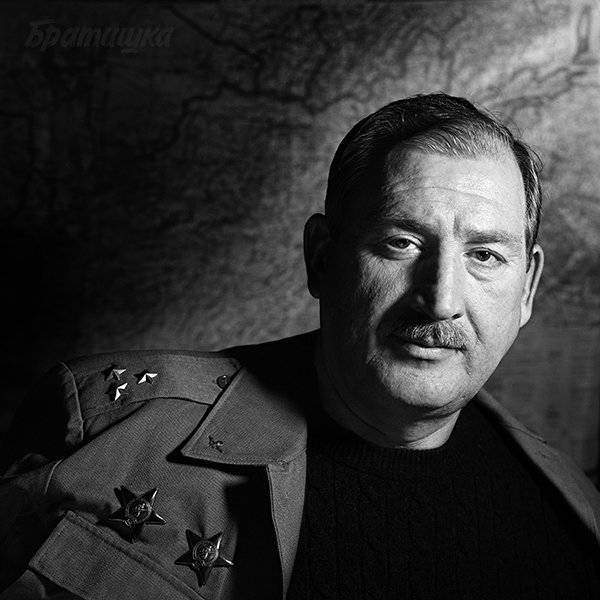 Vladimir Kovtun, Colonel of the GRU special forces, veteran of the Afghan campaign, one of the most productive officers of 186 oOSPN GRU. It was his group that captured the first samples of Stinger MANPADS from the Mujahideen. During his service in the DRA, he received two orders of the Red Star and seven bullet wounds. Twice presented to the Golden Star Hero. 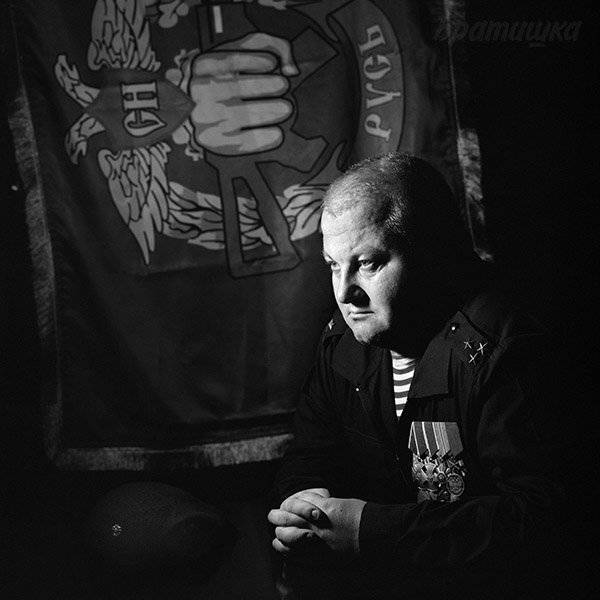 Didkovsky Yuri, colonel of the special forces of the Ministry of Internal Affairs, the last commander of the legendary ROS No. XXUMX Rus. “Krapovik”, a veteran of both Chechen campaigns, in front of which Karabakh and the Ossetian-Ingush conflict passed. He took part in many special and secret operations. During the 8 events in the Kadar zone of Dagestan in August, Didkovsky personally supervised the rescue mission of the Kalachevsky brigade, who were surrounded by militants on Mount Chaban. OSN Rus took part in the defeat of Barayev's gang in Alkhan-Kale, the destruction of Abu Yakub - the financier Amir Khattab, hiding in Old Atagh with other mercenaries, dozens of other special operations. The squad was disbanded in 1999. According to the official version, this was done “as part of the reform of the special operations forces of the internal troops, with the aim of creating a special-purpose center (TsSN) of the Vityaz Interior Ministry. 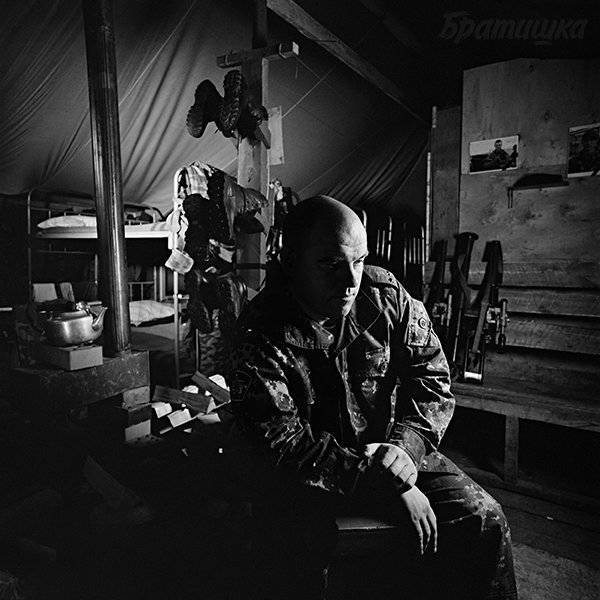 "Davyd", lieutenant colonel of the special forces of the Ministry of Internal Affairs, commander of a separate reconnaissance battalion of special forces (ORB-242) of the Internal Troops of the Ministry of Internal Affairs, stationed on a permanent basis in Ingushetia and regularly participating in special events in the Caucasus. A veteran of both Chechen campaigns, was wounded during an explosion by an armored troop-carrier on a landmine. Awarded the Order of Courage. 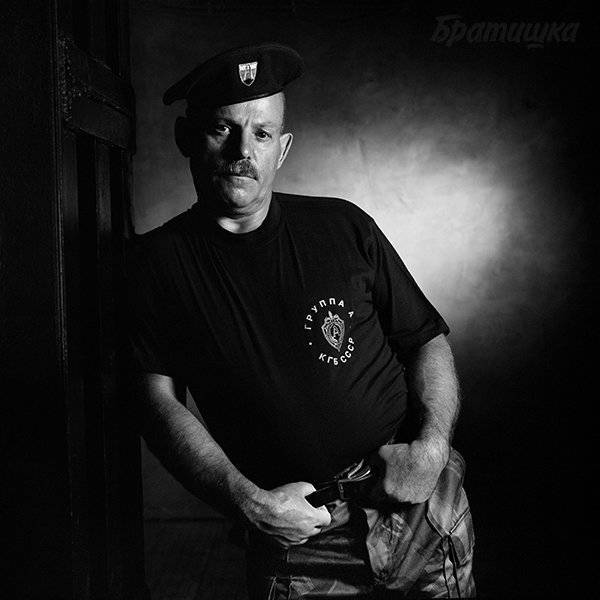 Tarasenko Vladimir, a veteran of Group A with 1978, a member of the Kabul operation, stormed the building of the Kabul Telegraph, and later for several months in the group of special forces of the KGB guarded the President of Afghanistan Babrak Karmal. He participated in various anti-terrorist operations - Budennovsk, Pervomayskoe. He led a group of combat swimmers during events related to the protection of President Boris Yeltsin of Russia. 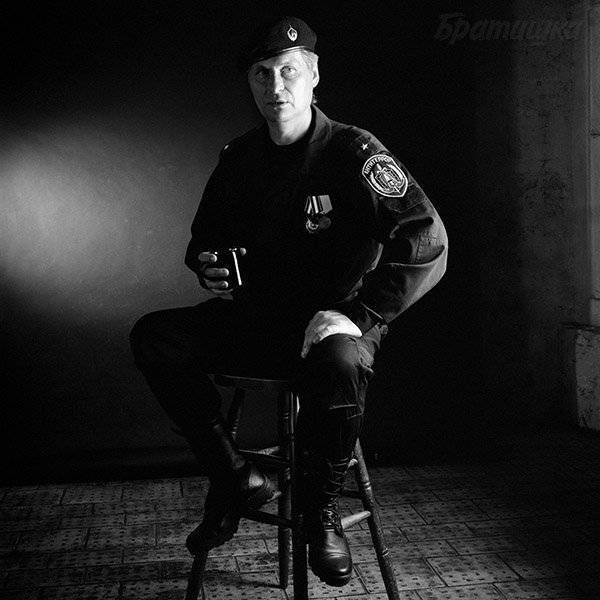 Lutsev Victor, Major KGB Special Forces. He worked at Alpha from 1982 to 1992. After undergoing combat training in Afghanistan, he participated in the Saratov, Sukhumi and Ufa operations to free hostages. In 1991, by order of the Kremlin, a KGB special forces group participated in the Vilnius events - the storming of a city television center, during which an Alpha officer was killed. He quit 1992 together with a group of other veterans because he did not want to swear allegiance to President Boris Yeltsin. 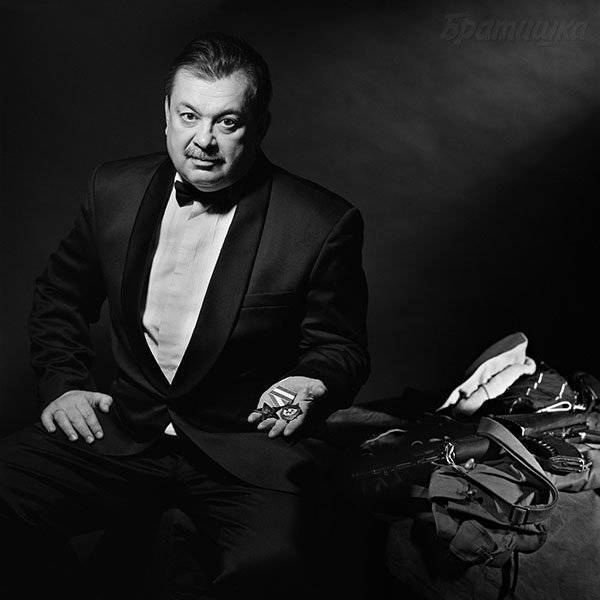 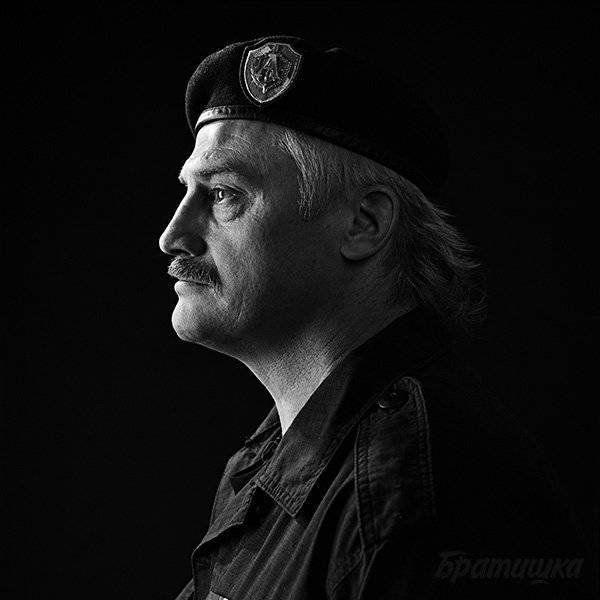 Mikhailov Alexander, colonel special forces of the KGB-FSB. He worked in the KGB with 1973, in the "Alpha" from 1982 to 2005. In 1983 he went through combat training in Afghanistan, during which he took part in the defeat of the gang of field commander Kudduz-Kale "Pleshivy". During his time at Alpha, he took part in almost all known special operations - Sukhumi (for which he was awarded the Order of the Red Banner), Saratov, Ufa ... He worked in Nagorno-Karabakh, in Vilnius 91, fought in 1 and 2-th Chechen, took part in the storming of the hospital in Budenovsk, in August 96-th went out together with the department of Grozny besieged by the militants, in 2002 he took the most active part in the antiterrorist operation in Moscow at Dubrovka. 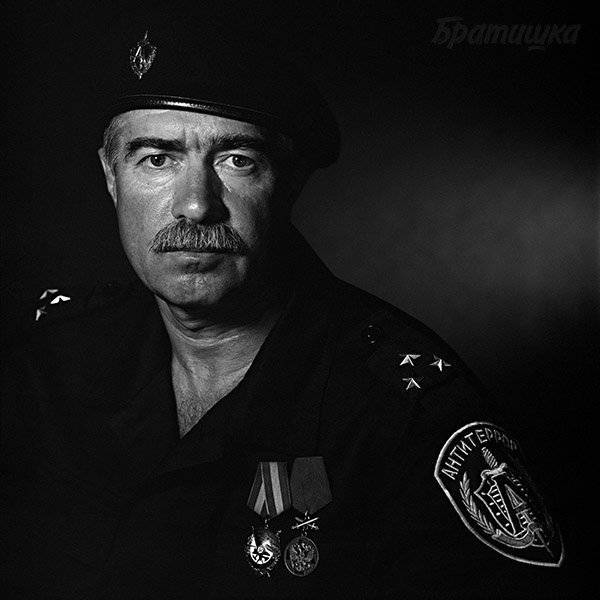 Repin Alexander, Colonel of the KGB of the USSR, work in the KGB - from 1974 to 1998, officer of the second set of Group “A” with 1978, operational cover - “the physical education instructor of the Scientific Research Institute“ Luch ”. A member of the Kabul operation, stormed the Presidential Palace, received several fragmental wounds during the battle. While working in Group A, he performed various delicate tasks - “took care of” dissidents, participated in various anti-terrorist operations - Budennovsk, Pervomayskoye. 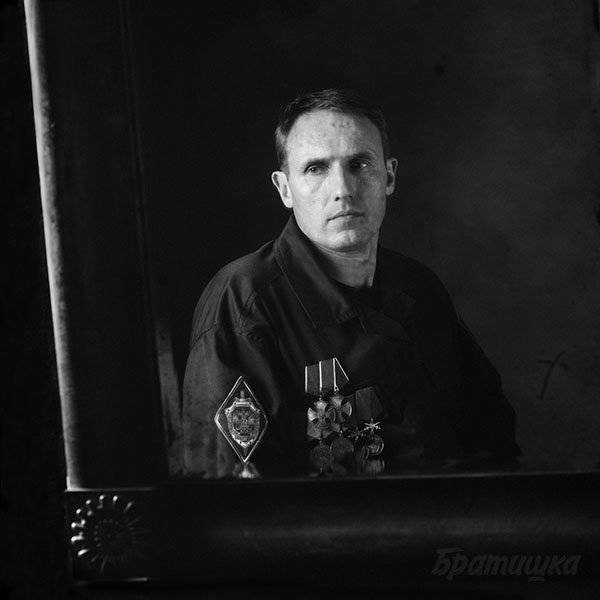 Vladimir Tregubov, Major FSB special forces. In Vimpel - from 1993 of the year. Veteran of two Chechen campaigns, 14 combat missions to the Caucasus. In August, 1996, together with the department, withstood a four-day siege at the FSB dormitory in the Leninsky district of Grozny, and, despite two contusions and shrapnel wounds, managed to get out of the encirclement. Took part in a large number of special and secret operations. He worked at Nord-Ost. The last operation was Beslan, where in the course of a battle with terrorists on the first floor of the building, he received three heavy bullet wounds. Awarded two Orders of Courage and other awards. 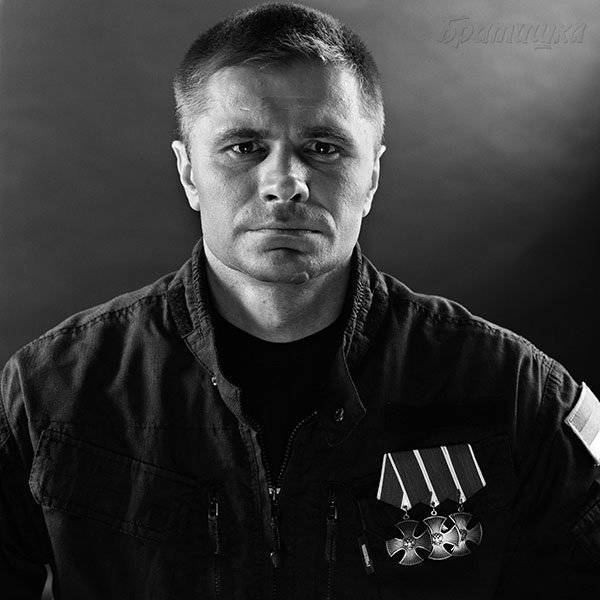 Milarshchikov Gregory, colonel special forces of the FSB, a veteran of special forces of the Interior Ministry. In the special forces - from 1988 year, starting a career as part of the OSN MIA "Vityaz", where he passed the exam for the right to wear "Krapovogo" beret. Having passed all the hot spots of 90 and the first Chechnya, he continued to serve in Alpha. Chevalier of the three Orders of Courage. Three wounded. He fought on Bald Mountain under Bamut in the 1 campaign, worked on Nord-Ost and in Beslan ... He retired after being injured in Dagestan during the storming of a building with militants stationed there.

We are in Yandex Zen
Chronicle of the "Afghan war." "Stinger" against helicopters: special forces against "Stinger"
Turntables, Afghanistan. "Eight"
14 comments
Information
Dear reader, to leave comments on the publication, you must to register.