Modern ideas about the occupation and leisure of Japanese samurai are, in general, quite stereotypical. And stereotypes in our time are automatically superimposed on any image of the historical and literary hero of Japanese novels. 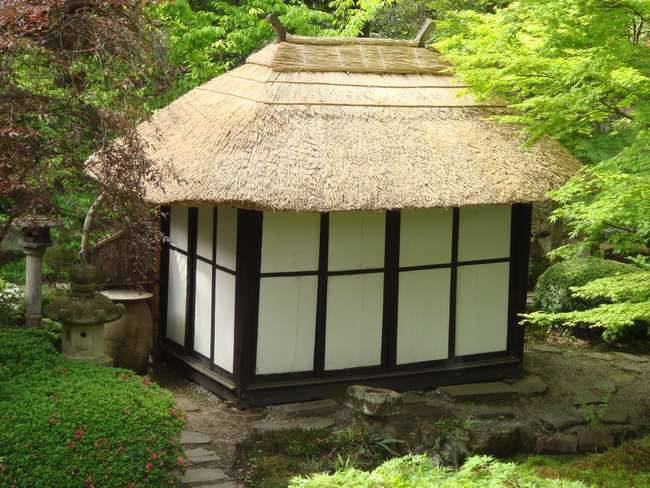 It is not surprising that samurai are just as good swordsmen, who definitely will not deny themselves the pleasure of contemplating their magnificent armor. Perhaps, in the hours of rare leisure, they found time to throw some poetic lines, at the same time combining their not too frequent inspiration with thoughts about the irreversibility of death and inventing various ways of happy "leaving" from life. In fact, it was quite the opposite. Many samurai did not hold a sword in their hands. Most likely, the Buddha’s teaching was taken literally by them. But even those who were famous for their military exploits didn’t always represent bloodthirsty murderers and “thugs” obedient to their master, in doodles by dozens of heads carrying their masters. 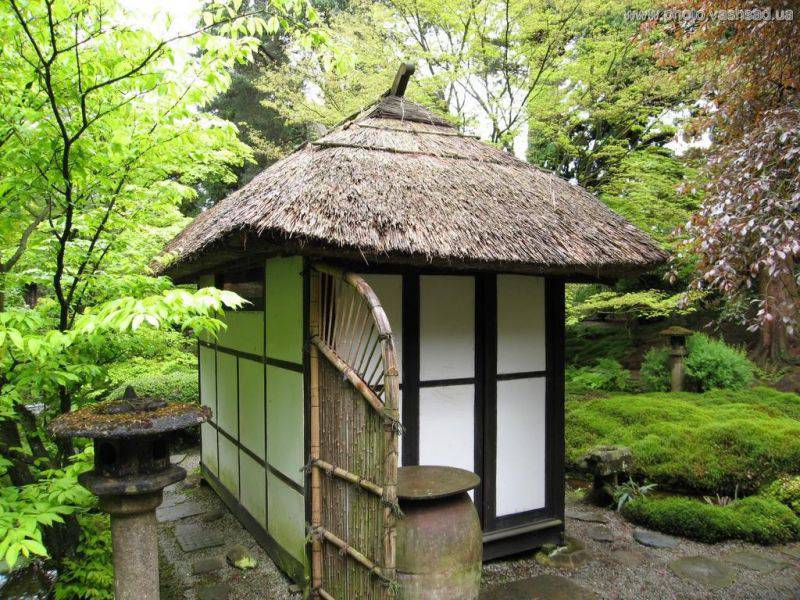 Tea house in the forest.

The Japanese today, despite the rapid rhythm of their lives, still find time to think about the meaning of their existence, about the frailty of life. The annual tradition of admiring flowers - hanami - as a centuries-old tradition that emerged during the Nara period (710 - 784), acts as a distinctive feature of the Japanese samurai, a sophisticated and sophisticated warrior.

The difference between samurai in peaceful life and on the battlefield is clearly visible. We got up in the morning - went to bed in the evening. Everything here is like the rest. Demonstration of their social status obliged to pay special attention to their toilet, for example, hair. They admired flowers, watched the sunset, could laugh heartily at the performances of the Kobuki Theater. Sometimes, of course, they drank sake, flirted with young women, did not deny themselves the use of excess food. However, a particularly developed sense of beauty distinguished these warriors from warriors from other regions of Eurasia. That is, the education of the samurai was, so to speak, very extraordinary in the opinion of those same Europeans, since the natural conditions surrounding the students were also not quite ordinary. 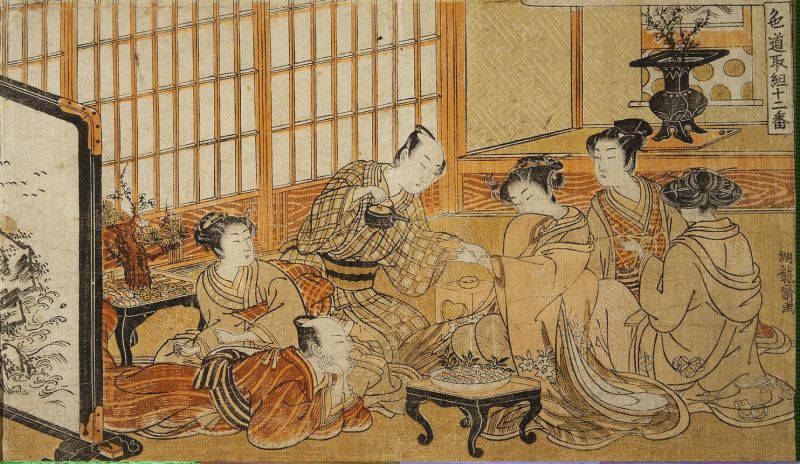 Cavaliers and ladies at the tea ceremony. Artist Mitsuno Toshikata (1866-1908).

Competent possession weapons, horse riding, hunting and playing chess - the only thing that was required of the knights of Western Europe. Everything! The skills of a good knight, the Arab knights Faris, included the ability to "appreciate the nobility of horses and the beauty of women." Surprisingly, the horses in the "list of interests" of the Arabs held a leading position compared with women. But in the rest of the literacy they are seriously inferior. Charlemagne was illiterate. His assiduous attempts to add letters never taught him to read and write. But nevertheless among them there were quite good poets and storytellers, as, indeed, among Japanese samurai. Already from early childhood began their journey to quality education. And further education was no exception. Many samurai received it when they were in the service of their master. Unfortunately, the opinion of the knights was formed in such a way that for a long time they understood literacy as the lot of the clerics, but not the lot of their own kind. Home education ended for them the honorary title of a knight or squire. But the samurai continued their studies after 18 years in educational institutions such as gymnasiums. There, the Chinese language replaced Latin in European universities.

Now it is clear that the samurai had enough time to combine military business with leisure. The Spartans knew nothing more than leisure and war. The same European knights, feudal lords, almost exactly copy the life style of the samurai, bypassing them a little at the educational level. After a grueling, hard day, having made another feat in the name of the country and his master, calm and good rest were indispensable. And here it should be emphasized that a very important source of restoring inner peace of mind of the Japanese knights was freshly brewed tea. Hot and fragrant. He was the only one - he warmed, soothed, charged with energy, helped to seriously relax in moments of spiritual relaxation. The obsession of the Japanese with such ordinary tea reached the point that they connect the flowering of their centuries-old culture directly with the activities of the religious Buddhist school of Zen, and only because the monks of this Buddhist school brought tea to Japan from China and drank it at night to get rid of drowsiness. 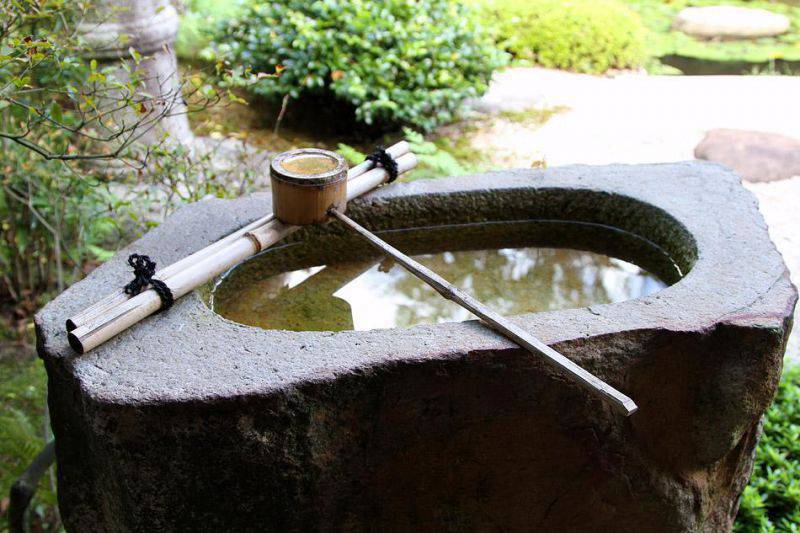 To the spring, even if it is located somewhere far away in the forest, a neat wooden bucket for water is surely attached.

This custom was adopted by samurai. For this, the tradition of tea ceremonies - tiado (“the way of tea”) was developed. The participant of the tea ceremony required extreme concentration, renunciation of all that was bad, spiritual reunion with nature. Tea houses - Tysitsy, located away from the hustle and bustle of city life; conducting a Japanese ritual required an intimate atmosphere and communication in private. Tea drinking is, first of all, a meeting of friends and good acquaintances who have common tastes and inclinations. The organization of the appropriate atmosphere for friendly communication sets its conditions for achieving this comfort: simplicity, cleanliness and compliance of a certain situation with specific guests. The host is the host of the ceremony. Soon there was a need for a professional tea ceremony organizer. Such professionals enjoyed prestige among the highest aristocracy and among the samurai.

A set of dishes for the Japanese tea ceremony:
Natsume - a ceramic cup for weakly brewed tea;
Tiasaku - bamboo or wooden teaspoon;
Tyavan - a teacup;
Iassen - a whisk for whipping tea;
Mizukashi - a vessel for brewing water;
Hisaku - ladle, which is poured hot water into cups;
fucus - the cloth with which the owner rubs the tea utensils;
Kobukus is a fabric on which a cup with hot strong tea is served to the guest.

A well-trained tea master should be able to quickly navigate and solve taste problems. Arranged "tea well-being" helped reconcile even the most violent enemies. Artfully decorated bouquets of flowers, a scroll with beautifully written hieroglyphs or engravings are the main details of the interior that define the theme of the ceremony. 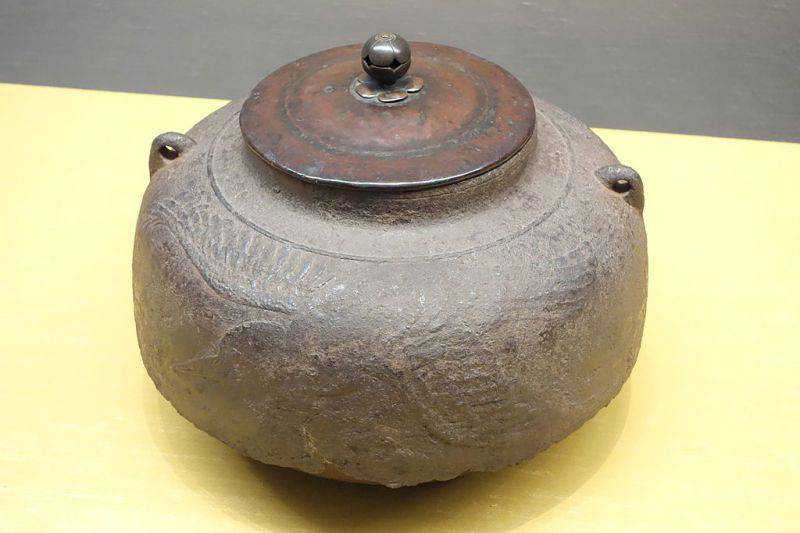 A teapot with the image of a raven, XV-XVI centuries. Tokyo National Museum.

Along with the dishes, special attention was paid to vases in which small bouquets of flowers were made out. The specificity of the tea ceremony's detailed arrangement is very well revealed by a case from the life of a Japanese samurai, Ued Shigeasu, who, under the fire of his enemy, at the risk of cutting off the vending bamboo trunk, to make a small vase for a tea house. The only material used to make these vases is bamboo and ceramics. 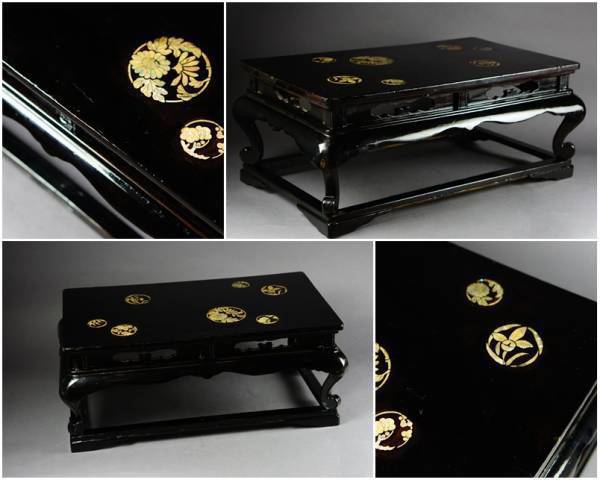 Tableware for the tea ceremony should not be fanciful. High-quality manufacturing of dishes was not an easy task. A skillfully made cup or caddy was sometimes valued above a good sword. As a rule, the tea ceremony took place against the background of a specific live sound, which was produced by a cast boiling kettle on a brazier or tripod. Sometimes iron bars of various sizes were placed on the bottom of the kettle, which could regulate the sound palette coming from the kettle. On a smoothly polished tray often served light snack, corresponding to the season, the mood and taste of the guest. Low lintel forced, bent over to eat on a tray, and thereby equalized all the "growth". 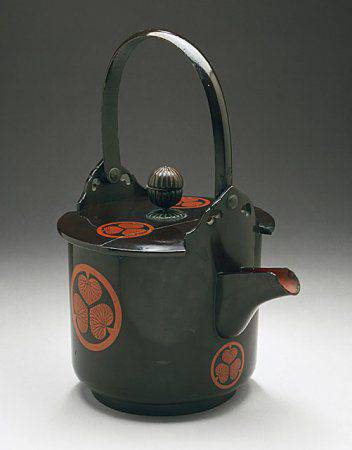 After eating, you had to rinse your mouth and hands, and only then drink tea, slowly, enjoying the taste and smell of "green drink". As a sign of politeness and gratitude, it was worth wondering where the dishes came from and what kind of craftsman she was made. Naturally, praise her. After all, each cup was distinguished by the uniqueness of its shape and its pattern. Among them were not even two identical. Cups with shcherbinki were considered the most valuable and were intended for especially noble guests. 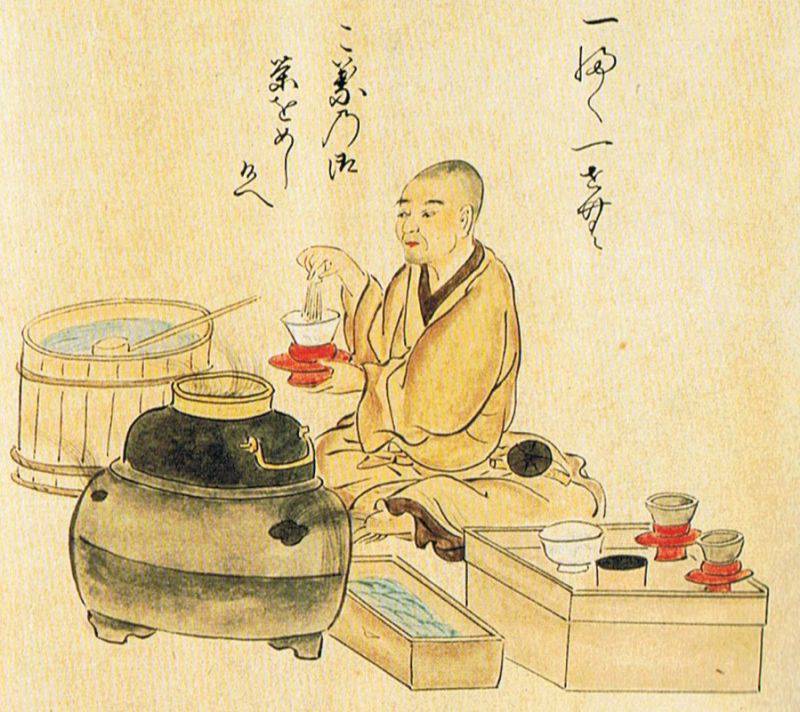 Dry tea leaves were measured with a special bamboo spoon and poured boiling water from the kettle in porcelain cups. The green liquid was whipped with a bamboo whisk until a light green foam appeared. Another spoonful of cold water and everything was ready to enjoy ordinary Japanese tea. Of course, the recipes of the masters were a little different. 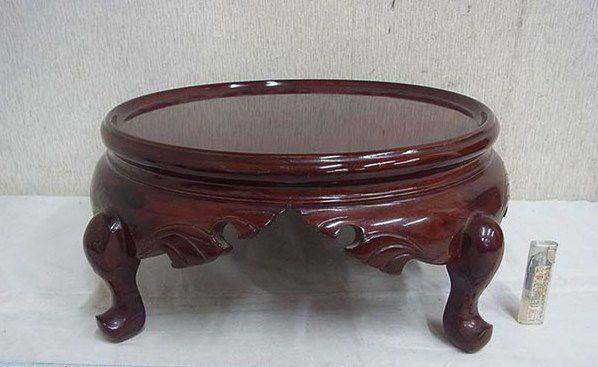 Japanese antique table of the middle of the last century - hakumi. Specially designed for cha-no-yu, it is made in the style of chirikane and coated with brown varnish, followed by polishing. Size 47 × 18cm.

Then the fashion for tea moved to Europe, there were tea clippers with a maximum speed of delivery of new tea from Asia. But this история requires a separate conversation, in which the samurai warriors have no place.

The authors thank the company "Antiques of Japan" for the photos and information provided.