America brought itself to depression 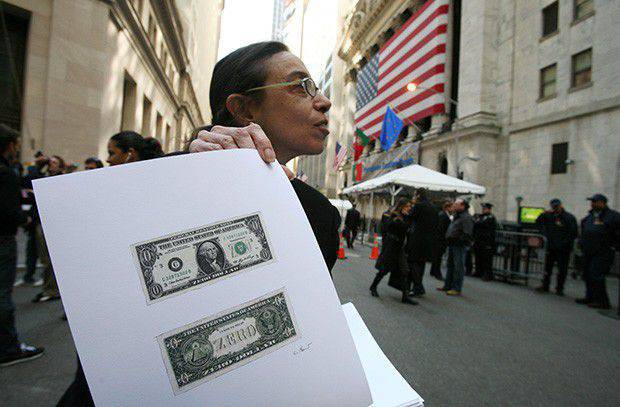 As Winnie-the-Pooh said in a famous Soviet cartoon, honey is a very strange thing: if it exists, then it is not there at once. The same can be said about money. They are constantly lacking. The Roman emperor Caracalla at one time thought up to save the treasury by reducing the weight of the silver coin. His followers went a different way and began to “dilute” precious metals with bronze. Later, cheap copper went into action. Needless to say that after that the Roman money almost depreciated.

But история this is not over. Many centuries later, the United States approached the problem even more dramatically and simply abandoned the gold standard, starting to print money "out of thin air." Through the system of international debt, the Fed's printed output quickly entered the world circulation.

By creating in this way a source of infinite wealth, America built socialism in itself. No mistake, namely socialism. Of the 3,6 trillion dollars of the expenditure part of the state budget, 57,6% is spent on all sorts of social programs. And the budget deficit is 1,3 trillion, i.e. reaches a third, which the United States and cover through debt. What happens in the country, if this system collapses, is clearly seen in the example of Ferguson. Therefore, the main question for the American government is how soon the source of debt money can run out.

The latest (from 31 December 2014 of the year) consolidated report of the US Treasury and the Fed Board of Governors reports that America has accumulated debts of 17,114 trillion dollars in total, of which the government has 36,3%, 3,3% comes from US banks, 17,5% - to other sectors of the economy, and finally, another 34,8% - cross-border corporate debt. Taken together, it is 8,1% of US GDP. However, the decisive role here is played not by the size of the debt itself, but by the cost of servicing it. American debt is denominated in dollars that are created by the States themselves, and they also set the refinancing rate. Due to this, the maintenance of dollar debts costs the treasury only 98,3% of its expenditure part. It seems to be quite a bit. For example, the Greeks cost of debt - all 12,6%. But it is on the surface. If you dig deeper, the picture takes on a different meaning. 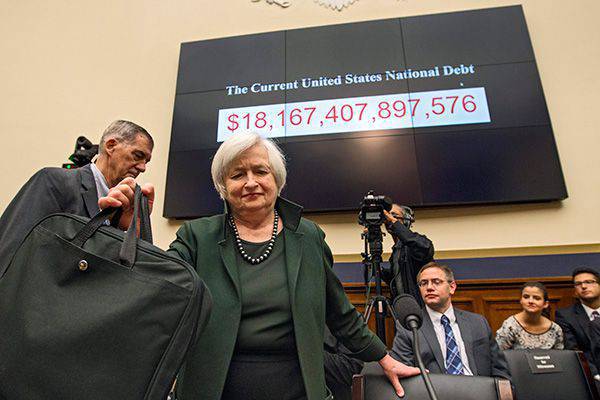 Fed Chairman Janet Yellen at a hearing on the Congressional Financial Operations Committee. Photo: Michael Reynolds / EPA / TASS
America did not start living in debt yesterday. Of the 4 trillions of its public debt in 2003, half accounted for half of domestic borrowing, i.e. from US corporations and pension funds. About 15% of the government's debt obligations belonged to the Fed, and the remaining 30 – 35% were made up of borrowings abroad. Approximately such a structure of American debt remained until the 2008 year, when the crisis occurred. Since then, the US has been actively increasing the volume of loans taken - first up to 10 trillion in 2011 and up to 17 trillion by the end of 2014 - and significantly changed their structure. The reserves of the Fed and the domestic market were exhausted already in 2012. The size of the Fed's share at the same time increased from 0,6 to 1,2 trillion dollars. So, America began to cover the progressive state budget deficit mainly by borrowing from foreigners, whose share of 2013 had already reached 52%.

At first glance, nothing terrible happened: it was a third, it was half. But that third did not reach 2 trillion, and half almost reached 6! Moreover, it follows from the aforementioned report that the United States intends to continue to live in debt. Moreover, this style was adopted by their corporations. In four years (from 2011 to 2014) foreign corporate loans increased from 664,7 to 1122,8 billion dollars.

Thus, the social stability of the American state is critically dependent on how its foreign holders manage American debts. For, directly or indirectly, in America on state subsidies "sit", according to various estimates, from 40 to 60 million people. Plus, the share of government orders in the US economy exceeded 45%. If the government suddenly runs out of money, social peace will turn into an explosion of terrible power.

According to the reporting figures for December 31 2014, in the amount of US debt to foreigners amounted to 5,966 trillion dollars, and their largest holder is Asia (4,43 trillion). With a large margin followed by Europe (0,931 billion) and Latin America (0,523 billion). Africa (0,41 billion), Canada (0,36 billion) and all other regions (0,30 billion) are whipping far behind. In this picture there are a number of remarkable strokes.

Statistics show that the planet’s “debt capacity” has been completely exhausted. In its medium-term forecasts (up to 2024 of the year), the United States does not expect that foreign debt in absolute figures will be at least slightly increased. There is no more free money in the world. The entire GDP of Africa barely reaches 14% of the American, in Latin America - no more than a third. In Europe, its difficulties are fraught with the economic crisis of a fatal size for it. All free money goes there to solve the Greek problem.

In general, the world is big - more than 200 states, but only 16 can act as key lenders for the United States. And they are clearly divided into three large groups. The first is China and Japan, which together account for about 40% of US foreign debt. The United States owes more than 1,2 trillion dollars to each of these countries. The second group is the 11 states that Washington owes from 100 to 290 billion dollars (and there are many oil-exporting countries among them, but the Fed considers them as one). And the third includes all other countries, the list of which closes Russia, which has American treasuries for 82,2 billion dollars. Germany, by the way, has a total of 69,9 billion.

From this moment all the fun begins. China is steadily reducing its US debt package - both because domestic braking is taking place in the Chinese economy and because of Beijing’s plan to turn the yuan into a world reserve currency. Over the past year, Red Dragon has sold 49,2 billion dollars worth of US Treasury securities. Plus, in the first quarter of 2015, China also sold 1,2% of US debt stocks. In general, of all the creditor countries, Japan alone buys them (13,6 billion over 2014 a year), and only because the yield on its own government securities is even lower. Only this creates some free money in Japan. True, there were rumors that Russia had changed its policy regarding American debts. After selling them last year to 56,5 billion in the second quarter of this year, Moscow allegedly bought something again. However, no reliable source, including the websites of the Ministry of Finance and the Central Bank of the Russian Federation, confirm this. According to official data, the volume of treasuries in the Russian portfolio this year has dropped to 70 billion dollars.

From half the world

In general, a fundamental contradiction arises between American plans and reality. The US budget for the next decade is planned with an annual deficit of at least 1 trillion. There are no tools to cut it. To attract foreign capital, the Fed needs to raise the discount rate. By the way, this is required by US pension funds. However, such a move will increase the cost of servicing the debt, which will not only eat up any influx of foreign capital in the United States, but will further increase the state budget deficit. Plus, America is required to repay those debts that their holders are starting to get rid of. It seems to be at first glance a bit. There is a percentage, there is half a percent, but on the overall scale of the accumulated amount, even half a percent is more than 80 billion dollars, which also have to be taken somewhere.

If you believe the statements of the Fed, over the next ten years, the United States is going to solve its economic problems solely by printing money out of thin air. They do not hide it. According to US forecasters, the amount of foreign debt all this time will remain unchanged - around 6 trillion - but the share of the Fed itself will increase in relative terms (from 15 to 40%) and in absolute terms (from 1,2 to 9 trillion).

Actually, this is a dead end. It's not even a prediction error. Japan’s reserves are scanty and will barely help the Americans cover their international debt sales. Buy the difference will have all the same Fed. So its share in the total amount of external debt will clearly reach 50% or more. The nuance is that any infusion into the economy of unliquidated money always causes inflation. For a quarter of a century, the United States deceived this law at the expense of foreign borrowing. Inflation was all the same, but the lion’s share fell on the shoulders of other countries and only partially affected America. Now that all the fan wrappers remain inside the US, the trick to the debt no longer works.

How much in these conditions, the US economy will stretch - a difficult question. The answer depends on how much and when Washington will succeed in signing agreements on the creation of Transatlantic and Trans-Pacific trade zones (TTIP and TPP). If all goes well, then even the 10 – 15 odds years before the next system aggravation, America will probably win. If not ...

The first systemic manifestations of the approaching global crisis, now known as the Great Depression (1929 – 1939), appeared in 1926. For three years, the United States believed that it was fully able to prevent the inevitable. Today time flows noticeably faster.