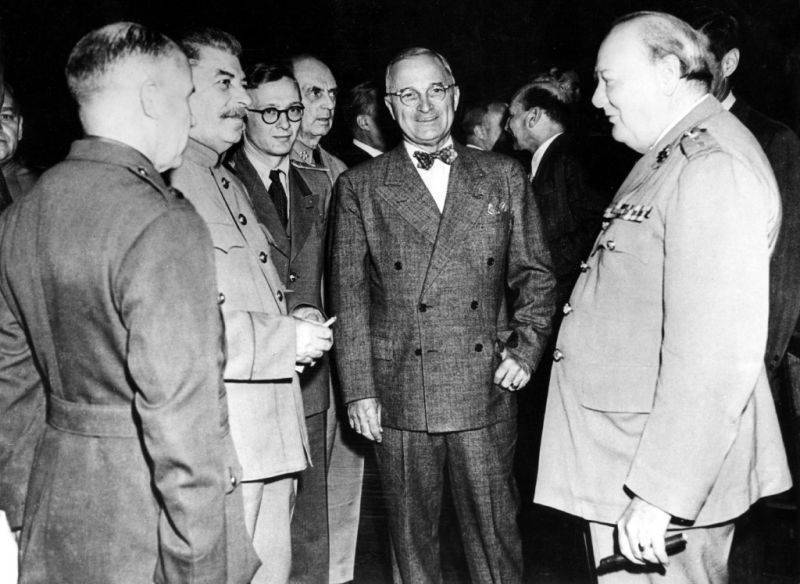 70 years ago, 24 July 1945, at the Potsdam Conference of the Great Powers, when discussing the postwar arrangement of the world, the head of the United States, Harry Truman, informed the Soviet leader Joseph Stalin about the creation in the United States "weapons terrible destructive power. " However, he did not specify that we are talking about nuclear weapons (the Americans fired the world's first nuclear explosion 16 July 1945 g.).

However, to the surprise of Truman and the British Prime Minister Winston Churchill, Stalin "did not lift his eyebrows." They decided that he did not understand them. In fact, the Soviet leader had long known about the American atomic project and was aware of similar work in Britain and defeated Germany. He knew that the allies of the anti-Hitler coalition tirelessly create a “miracle weapon”. The Anglo-Saxons and did not know that Soviet intelligence regularly reported to the Kremlin about the Anglo-American secret developments. Soviet agents also worked in the holy of holies of America - the Manhattan Project; they penetrated into the British special services. And in the Soviet Union itself, a group of scientists headed by Academician Igor Kurchatov worked on the development of nuclear weapons from the 1943 year.

In a relatively short time, Soviet scientists managed not only to catch up with the Anglo-Saxons, but also to overtake them in the development of atomic energy necessary for the defense of the country and the development of industry and energy. The appearance of Soviet atomic weapons destroyed the Anglo-Saxons' plans for nuclear blackmailing Moscow and establishing their own world order. The monopoly on nuclear weapons that threatened the planet with horrific consequences (a good example: the American nuclear bombardment of the Japanese cities of Hiroshima and Nagasaki, which killed hundreds of thousands of civilians), was destroyed by Soviet genius.

It is clear that at first the Americans in the field of nuclear development were somewhat ahead of the Soviet Union. It was an international group of high-class specialists, with virtually unlimited financial opportunities and political support from the powerful. On the side of America played a kind of "team of the world." Back in the fall of 1939, the scientists E. Fermi and L. Szillard, who moved from Europe to the USA, convinced A. Einstein to write a letter to F. D. Roosevelt. In a letter, a well-known scientist spoke about the prospects for the emergence of nuclear weapons, warned about the threat of their appearance in Germany and proposed that the US government help researchers begin developing such weapons. In March, 1940, the US government began to fund the "Manhattan Project" to develop nuclear weapons. In 1941, in England and the United States decided to allocate the means and resources for the creation of nuclear weapons. In 1942, the world's first nuclear reactor was launched in the United States.

It is obvious that the so-called. “The world behind the scenes” - an informal transnational association of financial and industrial clans of the West (main centers in London and Washington) - pushed and supported the US atomic project. After all, the idea of ​​building a new world order — a global non-slave-owning civilization with castes of “gods” and “two-legged tools” —had not gone anywhere. The project "Hitler" launched a big war in Europe, another clash of Germany (which gave almost all of Europe) and Russia. Russia and Germany were to die in this meat grinder or leave it as weak as possible, unable to resist the predatory plans of London and Washington. After the Second World War, the United States and Britain should not have remained a competitor in the fight for the place of the "king of the hill."

The Anglo-Saxons planned to establish their own world order, the essence of which Hitler and his ideologues, who were just good students of the Anglo-Saxon masters of the Great Game, ingenuously showed. And nuclear weapons were necessary for the “gods” to punish any disobedient people. The first to hit came the Japanese people. As a result, Japan is still an American-occupied territory. However, the further development of plans to build a global concentration camp destroyed the Red Empire of Stalin. The monopoly on atomic energy was broken and the Soviet (Russian) people once again saved humanity.

11 February 1943, Joseph Stalin signed a government decree on the organization of work on the use of atomic energy for military purposes. Initially, the work in this direction was headed by Molotov. In April, a special laboratory No. 1943 on the atomic problem was established at the Academy of Sciences of the USSR 2, headed by Kurchatov. The best Soviet organizer of the time, Lavrenty Beria, actively took up this business. Gradually, Beria became the curator of the atomic project.

Stalin supported Kurchatov, who in September 1944 wrote Beria’s letter about the insufficient supply of laboratory No. 2 and the poor organization of atomic research work. As a result, Molotov, who was too busy with other concerns, was suspended from project management. At the beginning of 1945, Stalin approved a number of important resolutions aimed at the development of the atomic project. The decree of the State Defense Committee No. 7357 instructed A. Ioffe and A. Alikhanov to complete the construction process of the cyclotron laboratory at the Leningrad Institute of Physics and Technology by the beginning of 1946 of the year. 27 January 1945, Stalin signed the decree of the State Defense Committee No. 7408 on the organization of the search, development and mining of uranium in Bulgaria. This uranium ore was used at the first Soviet nuclear reactor. In February 1945, Stalin signed a decree of the State Defense Committee on the training of nuclear physicists for laboratory No. 2 and related institutions.

At the same time, information on nuclear research came from abroad. Soviet intelligence was able to obtain reliable and sufficiently detailed data on the American project. According to the famous intelligence officer Sudoplatov, “the description of the construction of the first atomic bomb became known to us in January of 1945”. Intelligence has informed the Kremlin that the first test of an atomic bomb in the United States could happen in just a month 2-3. This allowed the United States to create an arsenal of atomic weapons in a period of one to five years. In April, 1945, the Soviet intelligence team gave the scientists a number of accurate information on the construction of a nuclear bomb and methods for the separation of uranium isotopes. Kurchatov was soon able to send a report to Stalin about the prospects for the use of nuclear energy and the need for extensive measures to build nuclear weapons.

It should not be thought that Soviet scientists merely “mounted” the atomic bomb according to the finished drawings. Without underestimating the merits of Soviet intelligence and ideological supporters of the USSR, it must be remembered that the creation of nuclear weapons in the Union was not only related to revealing the secrets of the enemy, but also required the development of new materials, new technological processes, new instruments and new machines, fundamentally new branches of science and technology. technology, entire industries. Soviet scientists introduced their original ideas (this will in the future allow the USSR to outrun the United States in creating a hydrogen bomb). Soviet authorities and scientists had to build an advanced nuclear industry in a country that had only recently been agrarian-industrial, unlike the advanced industrial American power, and was drained of blood by war.

It was not for nothing that American researchers John F. Hogeron and Ellsworth Raymond, after examining Soviet scientific, technical and industrial potential, published an article “When Russia Will Have an Atomic Bomb” in 1948, in the year “1954” this is the earliest time when nuclear weapons will be created in the USSR. According to other Western estimates, the Soviet Union could have tested the atomic bomb no earlier than 1955-1957. However, the Soviet organizers, scientists, engineers, technicians and workers have denied this opinion by creating nuclear weapons in 1949.

Not surprisingly, Stalin showed complete disinterest when American President Truman informed him about "weapons of terrible destructive power." First, he already knew in detail about the American program. Secondly, he did not show the "partner" that he knew about nuclear weapons. According to Churchill, Stalin smiled, but did not become interested in details. The British Prime Minister considered that Stalin did not understand anything and was not in the know. Thirdly, Stalin did not bite on the “bait”, did not try to find out about the “miracle weapon”, showing his weakness, being frightened by nuclear blackmail.

However, the American test in the Alamogordo desert of the first nuclear explosive device and the nuclear strikes on Japanese cities contributed to a significant increase in the efforts of Soviet specialists to develop nuclear weapons. 20 August 1945, a special committee established a special committee chaired by L. P. Beria to create the nuclear industry. This committee includes candidates for membership in the Politburo - G. M. Malenkov and N. A. Voznesensky, prominent business executives - B. L. Vannikov, A. P. Zavenyagin, M. G. Pervukhin, scientists - I. V. Kurchatov, A. F. Ioffe and P. L. Kapitsa. At the same time, the First Main Directorate (PSU) was formed, headed by Boris Vannikov. Numerous enterprises and institutions from other departments, including the scientific and technical intelligence department, were transferred to the PGU. Stalin instructed the First Chief Directorate to create an atomic bomb, uranium and plutonium, in the 1948 year. The bomb was created a bit later, in 1949. Soon, Beria will hand over the People's Commissariat of Internal Affairs to S. N. Kruglov and concentrate even more on the work at the head of the special committee.

At the same time, the USSR developed projects of long-range missiles (ballistic missiles). And although Stalin and Beria did not manage to witness the Soviet triumph in space, it is obvious that they made the USSR an advanced space power, which was able to launch the first artificial satellite of the Earth in 1957 and launch the first man in space in 1961.

In addition, thanks to Stalin and Beria, as well as other ascetics organized by the Soviet leaders, an effective air defense system was created in the USSR, a bomber aviation long-range, fast-paced fighter aircraft developed, which made unrealistic plans for an unpunished attack on the Union, which were cherished in the West. The appearance of atomic weapons in the USSR caused a shock in the West.

The Americans first folded the Fleetwood plan, adopted on 1 on September 1948 of the year and providing for the start of the war against the USSR before 1 on April of 1949. Then the Troyan plan, which was drawn up at the end of 1949 of the year, was canceled and provided for the start of US military actions against the USSR 1 in January 1950 and the use of 300 atomic bombs and 20 of thousands of conventional bombs against 100 in Soviet cities. The new “Dropshot” plan, adopted at the beginning of 1950 of the year, was postponed to the 1 of January of 1957. The Anglo-Saxons had to abandon aggression against Soviet civilization, as it threatened with unacceptable losses. The fear of a retaliatory nuclear strike was increasingly held back by Washington’s aggressive plans.

The Anglo-Saxons were ready to unleash an atomic war against the Soviet (Russian) civilization. The blood of millions of innocent victims did not embarrass them. So, 1952, US President Harry Truman, said: "We will wipe out any ports and cities that need to be destroyed in order to achieve our goals." However, the iron will of the Soviet leader and the response of the Kremlin saved Russia-USSR from destruction and the planet from the global concentration camp, which they planned to build back in 1940-1950-s.