July 27 2015
9
The TM-39 anti-tank mine of the 1939 model of the year, it was thought, had some positive features, but it was not without flaws. As one of the main ones, relatively expensive case material was called. Due to the limited capacity of the industry, even roofing iron could be deficient. It was necessary to develop a new anti-tank mine in a cheap wooden case. This is how the TMD-40 product appeared.

When developing the TMD-40 project, a curious approach was used. Soviet gunsmiths decided not to make a completely new mine, based on new principles and details. On the contrary, the existing TM-39 was taken as the basis for it. In fact, a new mine in a wooden case was a processing of existing metal ammunition using cheaper materials. Due to the widest use of wood, it was possible to reduce the number of metal parts to the minimum necessary. It was proposed to make all the elements of a mine from wood. Only the details of the fuse, the axes of the explosive mechanisms, and the nails that held the boards were metal. 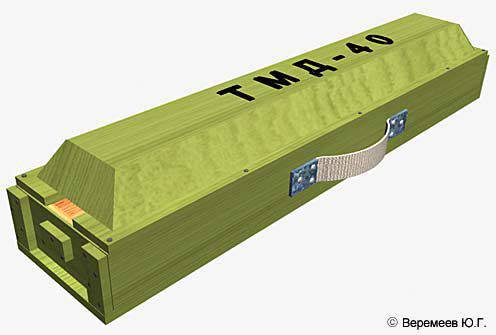 The basis of the TMD-40 mines was the hull, which came together from the boards of the required dimensions. The assembled case had a length of about 58 cm, a width of 13 cm and a height of about 10-10,5 cm. The case was assembled from four long boards and several small planks at the ends of the parallelepiped. Two long cuts along the edges were provided in the upper hull board. Instead of end caps, two thin plates with small improvised handles were inserted into the case. On the side surface of the body there was a cloth carrying handle.

A cover of relatively complex construction was installed on top of the case. Its basis was a board with dimensions about 50х6 cm with beveled ends. The last nails were hammered into thin trapezoidal planks, which were responsible for ensuring the correct mine triggering force. On the lower surface of the central lid of the lid there were two bars (so-called wooden bolts) that were included in the slots of the hull cover.

Due to the relatively heavy material, the mine TMD-40 with similar dimensions had more weight compared to TM-39. The loaded ammunition with explosive charge and explosive mechanisms weighed up to 7,9-8 kg. Wooden hull painted in dark green. Later, in order to simplify and speed up production, some series of mines were covered only with linseed oil, while others did not receive any coverage at all. On the hull paint marking applied by the manufacturer.

The layout of the mine body. Photo Weaponland.ru

The layout of the internal bodies of the TMD-40 mine was completely borrowed from the previous TM-39. The entire central part of the body was occupied by explosives weighing 400 g. The dimensions of the body made it possible to fit seven such pieces. Along the corners of the hull, next to the explosive mechanism, were four 200-gram checkers. Anti-tank mine could be equipped with checkers of TNT, the French mixture, etc. The total charge weight was 3,6 kg.

The TMD-40 mines used two explosive mechanisms, which were a further development of the aggregates used in the previous mine. The mechanism was a small (10x5x5 cm) wooden box with a relatively thick bottom. The box did not have a lid and one of the small ends. In the existing wall 5x5, see the opening for the installation of the fuse. In the middle part of the box there was a lever fixed on the axis. The lever was a rhombic section with a thin stick / nail on one of the shoulders. The lever could swing freely when it was pressed at its different ends.

Mina TMD-40 was supposed to use MUV fuses with MD-2 fuses. The fuse was a tube, inside which there was a spring-loaded rod-drummer. In the combat position, the drummer was pushed out of the hull and fixed by check. For safe transportation, the fuses of the MUV series had a safety check, which should have been removed during installation. The fuses MUV for mines TMD-40 equipped with a P-shaped check. Fuse with a fuse placed inside the explosive mechanism. The speaker coming out of the box went into the opening of the TNT block while the check was put on the lever shaft. 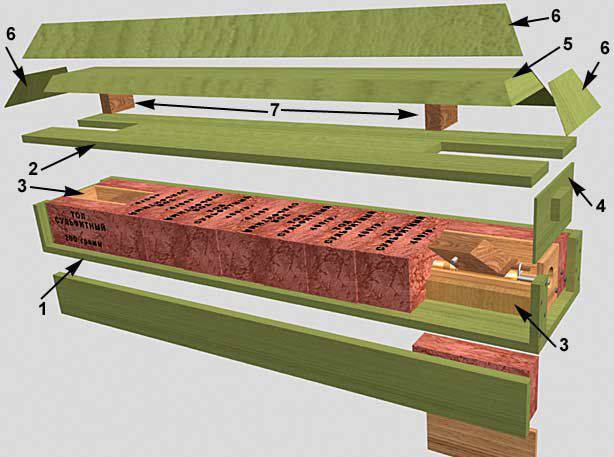 According to the principle of action, the anti-tank mine TMD-40 was no different from its metal prototype. The target sensor served as a cover on which the enemy equipment was to run. When pressed with a force of at least 80-90 kg, the lateral inclined boards of the lid did not withstand and broke, allowing the central board to move down. After that, each of the two "wooden bolts" pressed on the lever of its explosive mechanism, which led to the extraction of checks and an explosion.

Unlike the previous TM-39, TMD-40 mines were delivered to the troops in fully assembled condition. Explosives were loaded into the hulls and explosive mechanisms were installed without fuses. The ends of the case were closed with sliding covers, and the target cover was secured in place with nails. It was suggested to place the fuses in their place directly during the installation of the mine.

Charging mines at the factory made it much easier to use the new weapons in the army. Previously, anti-tank mines had to be equipped in parts, which led to unnecessary waste of time and effort. Now the mine could be delivered to the installation site in assembled form, and the sapper could only install fuses.

The installation of the mine began with the removal of the end covers of the hull. After this, the miner was supposed to connect the fuse of the MUV and the fuse of MD-2. The fuse and fuse with the extracted safety check were placed in an explosive mechanism through a circular side opening. The design of the mine allowed the mechanism to be pulled out, a fuse installed in its place and then returned to its place. During the installation of the fuse it was necessary to monitor its correct position. The fuse was supposed to get into the nest of the nearest checkers, and the loop checks - on the lever. After installing the two fuses, the end caps returned to their place. 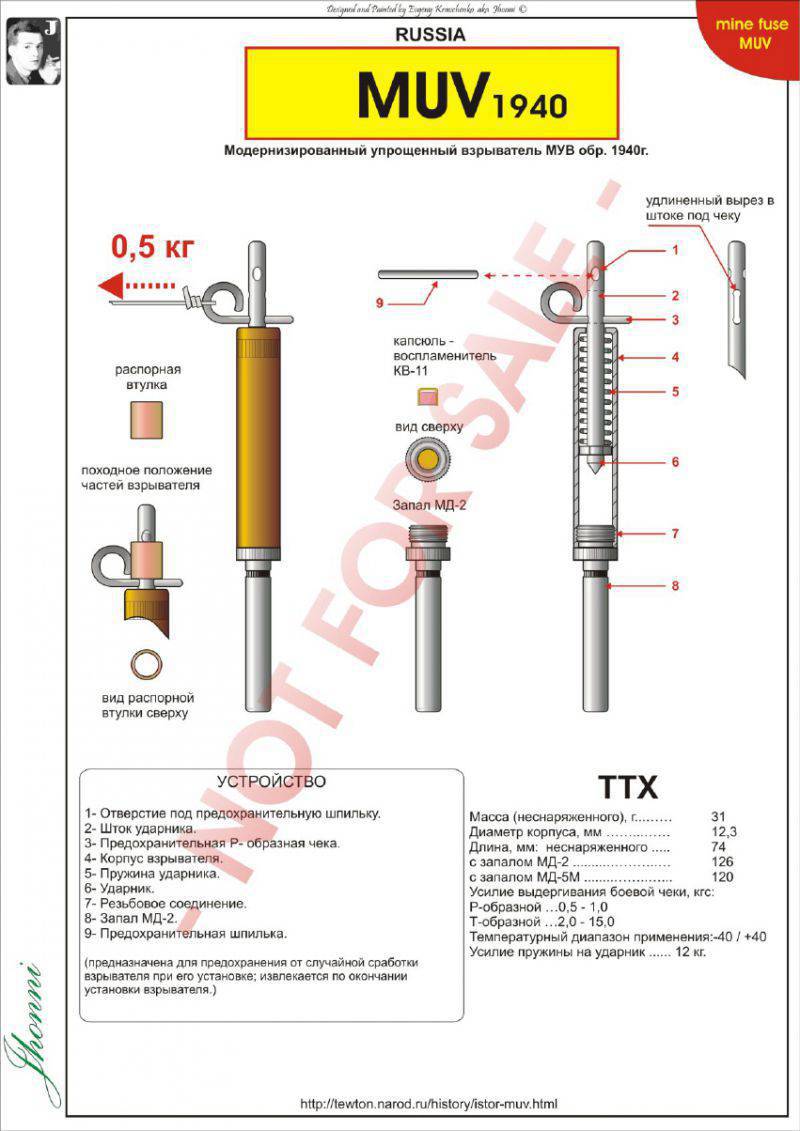 The design of the fuse type MUV

Mina with the installed fuses was ready for use. It could be installed in the ground, on the ground or in the snow. This should take into account some features of the area, taking into account the low resistance of wooden parts to external influences. It should be noted that, after the completion of the preparation for the installation, the mine posed a great danger because of the high sensitivity of the fuses of the MSM, whose check was removed with an effort of no more than 2-3 kg.

Like other mines of the first models, TMD-40 did not have special devices that made it difficult to remove or deactivate. However, the disposal of such ammunition was extremely difficult due to the high sensitivity of the fuse. To eliminate the detonation, it was necessary to remove the mine from the ground in a regular manner, remove the end caps and remove both fuses. In most cases, such complex and risky procedures were impractical. In addition, caps could swell up due to moisture, which made it impossible to safely remove them.

The service life of mines was not limited to documents, but usually did not exceed several months. Despite the protective coating, the wooden case was exposed to water and other external factors. Over time, the boards began to rot, which affected the characteristics of the product. In particular, due to the loss of strength of the side boards of the lid, the response force decreased. The softening of the details of the explosive mechanism led to similar results. Thus, over time, the mine TMD-40 lost the specified characteristics, because of which in some cases it became more dangerous. 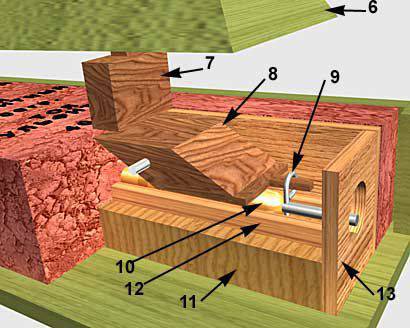 The TMD-40 anti-tank mines were actively used by Red Army sappers throughout the Great Patriotic War. By the beginning of the fighting in service consisted of several types of ammunition to create anti-tank barriers. All of them were used to set up minefields in various parts of the front.

As a modified version of the TM-39 mine, the TMD-40 product had the same drawbacks. Moreover, some of the negative features of this weapon have become the “heavy legacy” of the obsolete TM-35 mine. The main complaints concerned the inconvenience and danger of handling the fuse after removing the safety checks. The installation of fuses was a difficult task, making it difficult to prepare mines and required great care. Because of this, the installation of the TMD-40 mines could only be done during the day and only at a sufficient distance from the leading edge.

Over time, the insufficient charge weight made itself felt. 3,6 kg of TNT or other explosive could destroy cars, but could hardly cope with armored vehicles. The emergence of mass averages tanks with relatively powerful armor, the existing anti-tank mines could damage the chassis, but were not able to penetrate the hull and destroy the crew. To solve this problem, it was recommended to install mines in two or to surround the ammunition with additional explosive bombs. 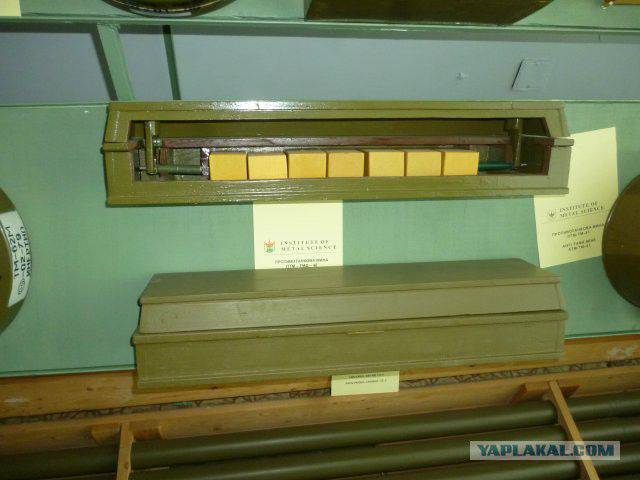 Museum Split Layout of Mine

The TM-39 and TMD-40 mines had an elongated hull, which, as expected, should have increased the likelihood of hitting the ammunition. However, this feature had negative features. Because of the relatively large length of the hull, only a small part of the mine and charge was under the wheel or track and the target hull. As a result, part of the energy of the explosion went to the side, without causing damage to the target.

Despite the shortcomings, TMD-40 mines were actively used to create anti-tank minefields. This weapon became widely known both in the Red Army and in the Wehrmacht. It is known that the German sappers, seeing the characteristic shape of the wooden case, called the Soviet mine Kindessarg ("Children's coffin"). However, this "coffin" was designed specifically for German technology.

The production of anti-tank mines TM-39 required the supply of roofing iron or other similar materials, which was too expensive for the first years of the war. As a result, the production of such weapons was minimized in 1942-43. The manufacturers of cheaper mines TMD-40, in turn, almost did not experience difficulties with the supply of raw materials. Due to this, the production of wooden anti-tank mines continued until the end of the war. Over time, TMD-40 completely crowded out their predecessors, and then the arsenals of the sapper units were replenished with newer and more sophisticated ammunition to destroy the enemy’s armored vehicles.