“The whole salt (literally, such lakes) is that for decades these beauties are in hundreds of hectares and dozens of kilometers of steppe, coastal strip of wide beaches and sea area from Chauda to Opuk and inland to the highway between Feo and Kerch were a naval training ground. I know firsthand, because at the beginning of 90's, I had a chance to serve here for a year and a half of military service in the Russian Black Sea Fleet.

The unique nature and the military with its frequent exercises "on land and at sea." It is from these expanses several years ago that the dashing rocket men of the neighboring state of Ukraine now threw the plane over the Black Sea coast of the North Caucasus.

It is here - a multi-kilometer beach was studded with broken ones tanks in the role of landing targets, it is here that the marines dug trenches in the fields of the Red Book tulips. 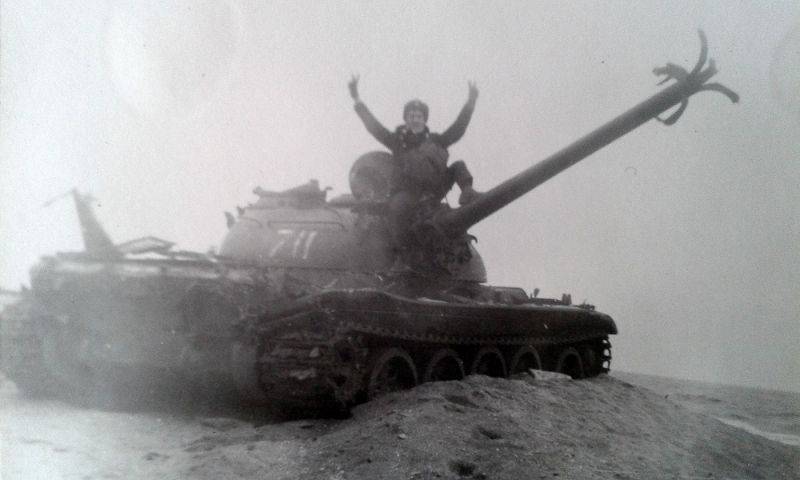 This happened at the site and on the way to Cape Opuk. Tanks are like dashboard targets on the beach between the Koyashsky and Uzanlar lakes. Filmed at the beginning of 1992.

It was here that the ships thrashed torpedoes over the rocks and at the base of the twenty-meter Sail, they still made it through - only from the beach at the eighth post there is such a view that you can see. 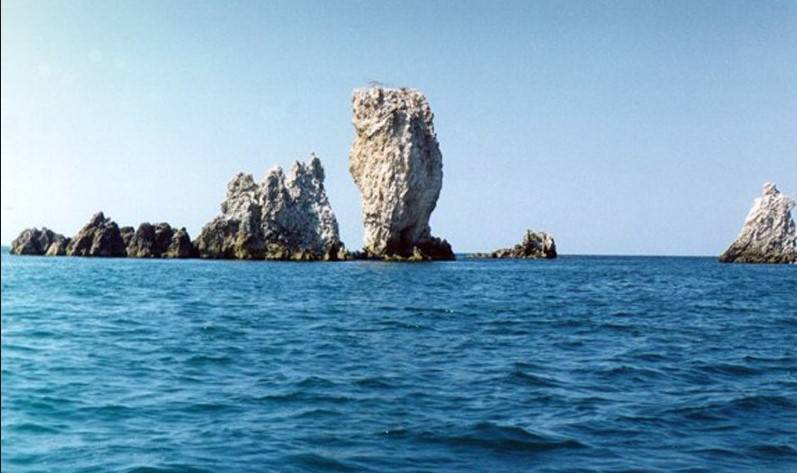 Four kilometers from the coast, over the sea one can clearly see a group of four islands - Rocks-ships (Elken-Kaya), once connected to the shore. The highest rock rises above the sea more than 20 meters

It was here on the cape in ancient times that the city of Milesian Greeks, Kimmerik, lived and flourished as a coastal outpost of the Bosporus kingdom - ruins of walls, quarries and pits of “black archaeologists”, of which in these steppes are called lucky ones (without quotes). Today, bat colonies live in the depths of the quarries, and pink starlings nest on the rocks. About this in all the guidebooks on the Crimea, but what exactly is not there, it's about one of the beaches. 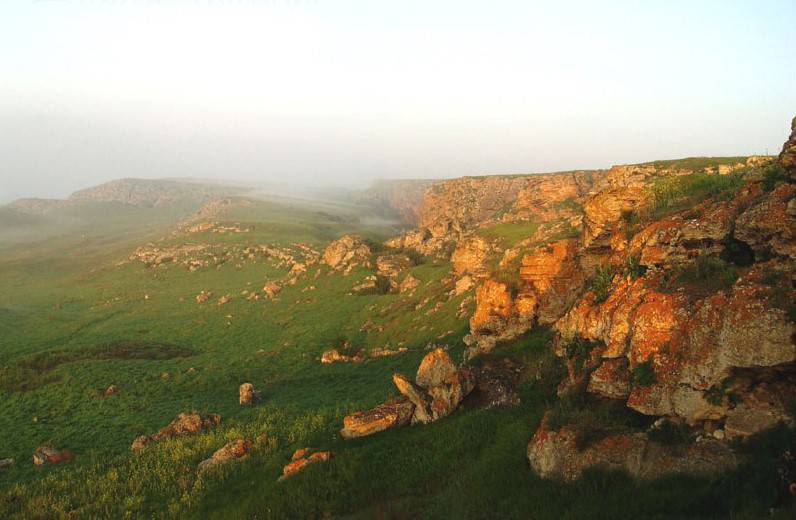 Back in the Greek Kimmerik, which existed before the collapse of the Roman Empire and what does Opuk have to do with it? I know on the coast of the cape among a multitude of coves a tiny and inconspicuous little beach measuring five by three meters with sand ... what is its uniqueness?

The Greeks traded with the Neapolitans Crimean wheat. Starting off from the coast of their peninsula, the ancestors of the future macaroni went empty, but there were storms in the Mediterranean, the Aegean and Chernoy - the sailors loaded ballast, which after a safe arrival to the Tauridan coast, without any burden, was dumped overboard at Cape Opuk. Ballast served as the usual sand from the beaches, but those that at the volcano Vesuvius. So, the very Vesuvian sand is still washed out on the stalk of the Crimean beach at Cape Opuk - not just sand, but with Karadag stones. 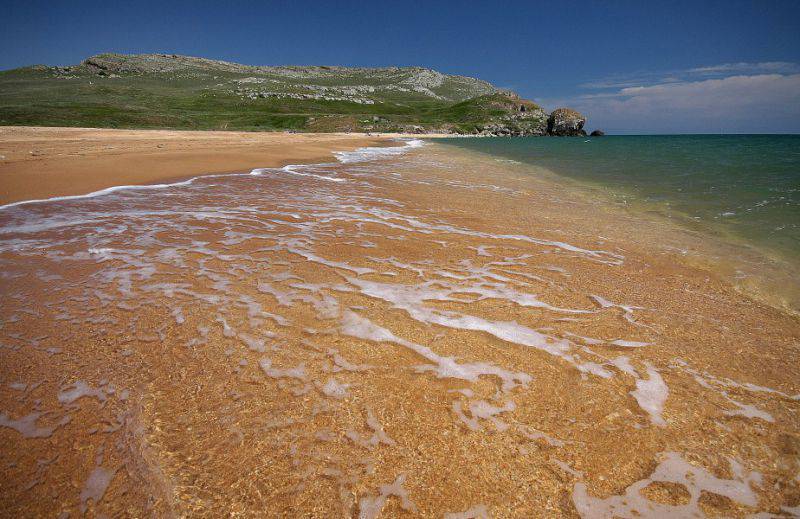 How do I know such legends? I had the opportunity to talk here in the summer of 1993 of the year with one uncle scientist - he stamped on foot along the coast of Crimea in search of the consequences of the hurricane of the fall of the previous year, well, and I, as an eyewitness to that rampant element, sent our military unit leadership to him as an ordinary called the "sand beam". Dyadechka when I found a few ten-ton limestone boulders, thrown by the hurricane to the shore at the cape. Here he told about the pebbles - directly collecting them on a little beach and sorting “this is Karadag, and this is from under Vesuvius”.

There is water on the Opuk mountain. The source - decorated in ancient times with limestone slabs with a watering hole for horses and sheep, there are also wells, and there are underground dungeons. We also pumped water from it to the naval tenth post of the Opuksky test site of the Black Sea Fleet of the Russian Federation.

That's the humor ... - guys with green shoulder straps daily bypassed the coast of the mountain and surrounding area in guarding the southern borders of our Motherland. Thus, border guards and sailors with marines (unwittingly, and not their cares) protected the unique nature of the Kerch Peninsula from wild tourists and uncontrolled visits to the reserve even now. 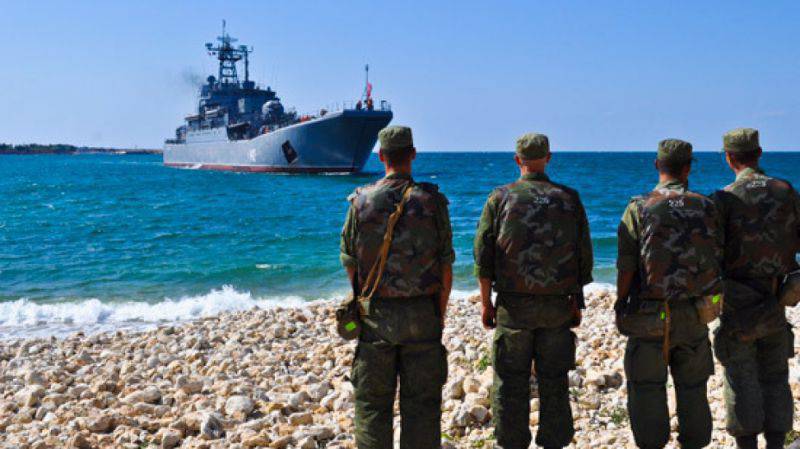 It is not so important - is there life now at that tenth post of Opuk Cape and does the polygon live a stormy life, but the vastness of the steppes around is still in its original prehistoric form. For a while - for the time ... I think so.
And it is good that few know about it. Let it continue ... "

I would like to add that the landfill can not be called "dead." So, our site in 2011 wrote about the teachings of military units of the Center of Coastal Defense Forces of the Ukrainian Navy AP at the Opuk test site.

In 2015, the training of Russian Black Sea Fleet marines at the Opuk training ground resumed.

In addition, this summer, the media reported on exercises at the Opuksky range aviation and missile troops.