The fault is Nuland

July 24 2015
35
Victoria Nuland from the State Department promised to put pressure on Russia if something goes wrong in the Donbas as the State Department wants. Of course, she expressed this thought in a diplomatic language. According to her, with the “escalation of violence” in the Donbas, Washington will not only maintain the sanctions against Moscow, but also increase the pressure. Some Western analysts believe that the “clan” V. Nuland deliberately draws the US into wars for profit. These people are eager to exacerbate the military conflict in Ukraine, knock out the Russian-speaking population from the east and the resignation or overthrow of Putin. 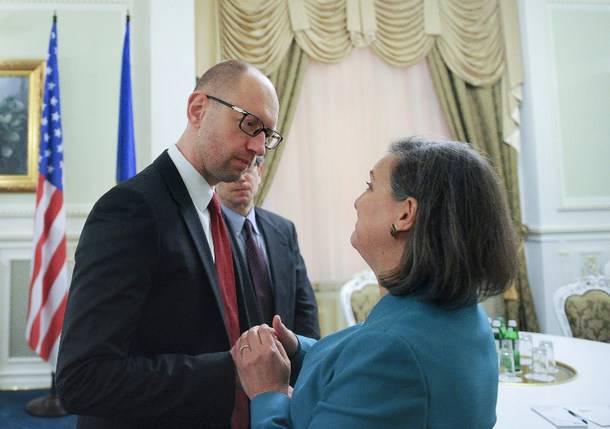 Assistant US Secretary of State Victoria Nuland, who became famous for “evromaydane” cookies and was essentially one of the engines of the coup in Kiev, which resulted in the overthrow of the legitimate president Yanukovych, a serious statement. Let's face it: she threatened Moscow.

In an interview with the Shuster Live program of Ukrainian television, she said that with the escalation of violence in the Donbas, the US was ready to step up pressure on the Russian Federation, as well as the DPR with the LPR.

“We made it clear that the sanctions will remain in force until the Minsk agreements are fully implemented. But we also made it clear that in the event of an escalation of violence, we are ready to increase pressure on Russia ", - quotes the assistant state secretary "Ukrainian Truth".

To demonstrate the seriousness of Washington’s intentions, V. Nuland recalled that America provides military assistance to Ukraine: “So far, the United States has provided about $ 150 million in military assistance and training for military personnel. We hope that the pressure and potential that we are putting will force Russia and the forces it leads in Donetsk and Lugansk to fulfill their commitments. Otherwise, the price for them will increase. "

There was a clarification. The facilitator asked if this price would be expressed economically and militarily. Nuland replied: "We do not exclude any possibilities, of course."

The publication cites another statement Nuland, made earlier. She noted that the Minsk agreements documented documenting the features of local government in the Donbas, and Ukraine fulfills its responsibilities: "Now you can say to Kiev: we have fulfilled our obligations, now the answer is yours." (“For you” is for Russia.)

In addition, the publication points out, during her visit to Ukraine, the Assistant Secretary of State confirmed that the United States supported Kiev’s approaches to further resolving the situation in the Donbas.

Of course, we add to this, such statements did not escape the attention of the Russian Foreign Ministry.

In the evening of July 22, the Ministry of Foreign Affairs of the Russian Federation briefly reported on telephone conversations between Russian Deputy Foreign Minister G. B. Karasin and US Undersecretary of State V. Nuland.

В message to the media indicated:

“On July 22, a telephone conversation took place between State Secretary and Deputy Minister of Foreign Affairs of the Russian Federation G. B. Karasin and US Undersecretary of State V. Nuland.

During the conversation, issues related to the implementation of the Minsk accords to resolve the crisis in Ukraine were discussed. ”

Unfortunately, this is all information.

Thus, the State Department in the person of V. Nuland (that is, Washington) believes that Kiev has fulfilled its obligations under the Minsk agreements, and now it’s up to Russia, which apparently doesn’t want to fulfill the agreement. And if he does not want to, the State Department threatens Moscow with “increased pressure” and even “does not rule out any possibilities,” including the military. "Press" Washington intends not only to the Russian Federation, but also on the LC and the DNI. It seems that someone really needs to provoke a new round of confrontation in Ukraine. To whom?

The well-known analyst Robert Perry in the Consortiumnews edition tried to answer this question.

American neoconservatives led by Victoria Nuland and her husband Robert Kagan were not called to account for the war in Iraq, and now they want not only to unleash a new war in the Middle East, but also to aggravate the conflict in Ukraine, an analyst TV channel "RT".

It was Nuland who aggravated the situation by provoking a second cold war between nuclear powers, according to Perry. What for? Because to those who make money in war, including the Kagan-Nuland clan, this plays into their hands.

Had the will of the neoconservatives come to that, the US troops would have invaded Iraq again, staged a coup in Syria, stabbed a deal over the Iranian nuclear program. These people are thirsty and the escalation of the conflict in Ukraine. Their plans are to knock out the Russian-speaking population from the east and “put aside” Putin’s power.

As Perry believes, a large part of such a gloomy "strategy" is based on the ideas of a husband and wife: Robert Kagan and Victoria Nuland. Kagan, one of the founders of the New American Century foreign policy project, began to advocate for the war in Iraq almost before everyone else. And Nuland "staged last year's coup in Ukraine, provoking a terrible civil war."

“RT” notes that in one of the articles in the “Washington Post”, the aforementioned Kagan called for the Republicans critical of a nuclear deal with Iran to become more active. According to Parry, the aforementioned Kagan also "demanded full commitment to neoconservative goals, including the intensification of military conflicts in the Middle East, aggression against Russia, and a departure from tax discipline in order to free tens of billions of new dollars for the Pentagon."

Victoria Nuland fully shares the views of the spouse, the analyst believes. And it is viewed in Washington as the “rising star” of American foreign policy.

Speaking about the business interests of this couple, Perry points out that for Kagan and Nuland, war is truly a family business. Frederick, Robert's brother, works at the Institute of American Entrepreneurship, which profits from the expansion of the military-industrial complex. Frederick's wife works at the Institute for the Study of War, specializing in the Middle East and having connections with people from the Pentagon. And this institute is interested in events in Ukraine, the analyst notes.

The curator of the “Maidan Project”, Victoria Nuland, gives Kiev a directive to defrost the conflict in the Donbas and disrupt the hands of the puppet Ukrainian authorities of agreements in the Minsk-2 format, said "Free Press" Director of the International Institute of the Newest States Alexey Martynov. The expert connects the activity of Nuland with the failed strategy of the White House in Ukraine:

“The American strategy in Ukraine is failing. For more than a year of confrontation with the DPR and LPR, Washington has failed to draw Russia into a serious regional conflict in the center of Europe with the prospect of expanding into continental. Statement Nuland represents a pitiful attempt to blackmail Moscow in order to mobilize Kiev to exacerbate the situation in the Donbas.

Even representatives of the executive and legislative authorities of Ukraine, who make decisions on the way-out from overseas, are no longer ready to follow the American instructions for Ms. Nuland's cookies so zealously and recklessly. “Dainty" was not so tasty, and the reality is much worse than it was drawn by the US authorities. "

Director of the Center for Political Studies at the Financial University under the Government of the Russian Federation Pavel Salin told the “SP” about which scenario in Ukraine is most likely for the political and economic future of the LPR and DPR.

According to him, this could be the “Transnistrian model,” that is, “de facto independent states that exist thanks to Russian diplomatic, military, and economic support.” Another option: the DPR and the LPR return to the structure of Ukraine “with preservation of a certain independence politically and militarily”.

As a result, we can conclude: the State Department brags, because the policy of "cookies", though it led to a change of power in Kiev, but split Ukraine into four pieces (and pieces may eventually become even more). The Crimea went to Russia, the LC and the DPR split off from Kiev, which will never become “full-fledged” parts of the Ukrainian organism, the rest is preserved territory, formally subordinate to Kiev, but in fact it is difficult for them to manage. Wishing to find someone guilty in such a situation and making a fuss about this, the State Department, in its propaganda habit, transfers all the arrows to Moscow, and declares Kiev to be right.

However, the guilty must be sought in a completely different place - in Washington. Guilty name is Victoria Nuland.