Information war: the best battle that did not take place 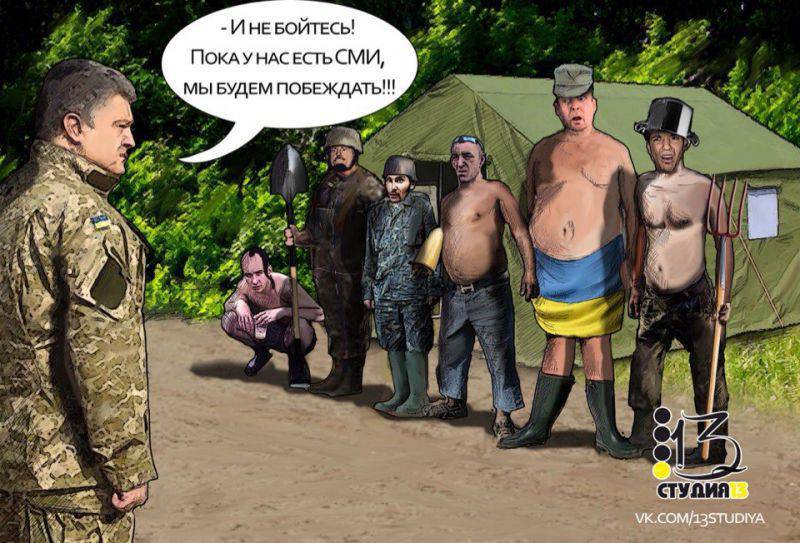 The second wave of demobilization has ended. The leadership of the junta army summed up its results. A total of 39 789 people were demobilized. But more than 80 thousand people were called into these two waves. Where did they all go?

The most painful topic for Kiev is the loss. Moreover, the junta bears the main losses, not killed or even wounded, but written off during service (commissioned, deserters, convicts, etc.). An even greater number of soldiers did not join the ranks of the defenders of the regime under the influence of certain motives. All this - the loss of the junta.

Each of the loss components has its own number, which is very difficult to find out exactly. Nevertheless, an approximate calculation can be made, of course.

Losses on the battlefield

Usually they count only them, although this is a small number compared to others.

Today, Kiev has lost thousands of people killed from 6 to 10 (the exact calculation is not the goal of this article, and below you will understand why). To this number should be added the wounded, who very often cannot return to the front. This is before the 20 of thousands. This, on the one hand, is huge for modern Ukraine, and on the other, such an insignificant loss of the Kiev regime compared to the other figures. Basically, these losses were incurred during the summer battles in the south of Donbass and the winter campaign in the areas of Donetsk airport and Debaltseve.

Losses are not combat, but irreparable

Much more soldiers lost the regime not in battle. First of all, it is deserters. Many of the captured soldiers did not return. An even greater number disappeared from vacations and layoffs. The total number of junta deserters, according to official data only, is about 10 000 people. Not all of them left the service. Many simply left positions without orders. However, about half of them for the army are “dead souls” that they cannot find.

Why would they do that? Some were cowardly, some could not stand the psychological impact of the war, some simply abandoned their units, convinced that the war unleashed by Kiev was senseless or a crime. And this figure is quite comparable with the number of those killed.

A much larger number of losses accounted for those who took advantage of various tricks for early demobilization. Crawling boil with the right "approach" turns into an incurable disease. Mental disorders have become a real scourge of the army Poroshenko. This disease has already “decimated” tens of thousands of people. For many junta soldiers, such diagnoses were salvation from the horrors of war.

In war as in war, all means are good. If usurpers act meanly towards the soldiers and the country, then the tricks of the soldiers are quite understandable and justified. Even before fleeing to Russia, I spoke with such former junta soldiers. The motive for their departure was not cowardice, but ... disappointment. At the front, it comes much faster than in the rear. What ordinary Ukrainians went for over a year to, in the “ATO zone” it became clear for a month or two.

Another column of casualties are soldiers who have committed criminal offenses. Often these are executions of colleagues and civilians, acts of violence, theft, etc. This brings quite noticeable losses (hundreds of soldiers were killed or became cripples as a result). But they are not the main ones. Such cases, especially unpunished, decompose any army, turning it into a gang. At the same time, such actions of the "army" of the junta mobilize the opposite side, motivating the enemy soldiers better than any agitation.

Losses from chaos. Corruption and chaos - the scourge of the oligarchic army of the Kiev regime from the very first days. Rotten legs and teeth, colds, turning into chronic bronchitis and inflammation, mow down the army in quantities of 10-20 people per day (according to Kharkiv hospital). At least a third of the soldiers no longer return to the unit.

The regime could not create a halo of legality around itself. I couldn’t convince people of their sincerity and honesty, which means it’s no longer surprising to be surprised at the response dislike. A significant role in this, along with losses at the front, was also played by the defeat in the information war, which the regime managed to lose even on its territory, despite the most powerful technical and methodological support of the United States. Neither the information dome, which prudently immediately after the coup covered Ukraine, did not help, nor the rampant pumping with hatred of the population.

There are signs of frustration with the regime. Each subsequent wave of mobilization, nicknamed by the people as “mogilization”, is carried out more and more with less effort. So much so that the regime was forced to classify the data on the implementation of mobilization. Of course, for all the great mystery that, despite the already uncovered raids on the men - the citizens of Ukraine, failure follows failure. And those almost 40 of thousands of veterans who have left in a stock to replace, as a matter of fact, there is nobody.

And I already keep quiet about the quality of the replenishment that came. Both in knowledge and in motivation.

The mobilization resource of Ukraine consists of males, who mostly served in the army and have an age from 18 to 60 years. Before the war, this resource was estimated at 2 million people. It was based on this figure that the “patriots” of the two countries (Russia and Ukraine) predicted a quick rout of the Donbass even after the defeat of the Kiev regime in the summer campaign. You can understand them. They are ideologically pumped materialists, who have completely forgotten that soldiers are people, not robots from "computer games" who die, are again produced and die again, until the resource of production of "boobies" ends.

In the computer case, the resource base usually determines the winner. “Ura-patriots” live in the virtual world and do not understand its differences from the real world.

In the life of a person, one must still be convinced to become a soldier, and then keep the soldier in line. But this is not enough. We must also force the soldier to carry out any order of command (as we saw above, the junta has big problems with this). A.V. Suvorov brought simple truth:

Remember that you are a man - your subordinates are the same people.
Love the soldier, and he will love you - that's the whole secret.

But KHUNTA and its officers did not study the legacy of a great commander who did not lose a single battle, and therefore ... cannot win. The population pays the junta the same. Only according to official data in each region of Ukraine tens of thousands of draft dodgers.

Ternopil Commissar speaks about 30 000 man only in his field. And Ternopil region is not the most densely populated part of Ukraine.

If we put all the figures together, we will already get a figure of more than a million draft dodgers, who responded with their feet to the calls "to protect Ukraine from external aggression." The most ridiculous and offensive for Kiev is that the draft dodgers ran into the camp of the “enemy”, that is, they were saving themselves from “their” government on the territory of the “aggressor”. Schizophrenia? If yes, then in Kiev. In general, the usual truth of life without propaganda. Therefore, we have 39 789 demobilized, which cannot be replaced yet, and the demobilization of the third wave, which is already revolting, is delayed.

Thus, in practice (as a result of one and a half years), Kiev was able to mobilize only about 150 thousands of people. And we are not talking about volunteers, but people in general who did not actively resist the criminal orders of the Junta. Ten times more “warriors” were defeated without a single battle.

As Alexander Vasilyevich Suvorov would say: Glorious Victoria and won by a little blood. Yes, there are losses in this war. Many of our “soldiers” paid with freedom, health, lives for this victory (hundreds of activists of the information war against the regime are still languishing in the dungeons of the SBU).

PS The great theoretician of Sun Tzu's wars, as always, is right: "The best battle is the one that did not take place." Victories are different. There was a victory of VSN over the army of the Kiev regime in the South of Donbass. There was a victory at Ilovaisk and Debaltseve. But the main was the victory, which was won without a single shot. KHUNTA lost a million-strong army, losing the information war. It is a pity that many people still cannot and do not want to understand this.