"Ukraine has become a dump of old weapons" 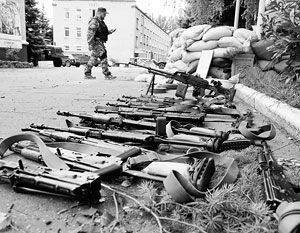 FSB cut off a large supply channel weapons to Russia from Ukraine, as well as from the EU through Ukraine. After the victory of Maidan, this post-Soviet republic became a convenient transit corridor for smuggling weapons. The fact that the FSB was discovered is probably only the tip of the iceberg, while terrorists in the Middle East are looking at the Ukrainian stems with interest.

The FSB stopped the activity of a criminal group that organized a large channel for the smuggling of weapons from the European Union and from Ukraine to Russia, the department said on Tuesday.

"On the territory of Ukraine, a situation has been created when nationalists are holding a huge amount of firearms in their hands."

The Center for Public Relations of the FSB told TASS that “in July in Smolensk, while selling another batch of weapons, some of the organizers of the criminal business, one of whom was a previously convicted citizen of the Azerbaijan Republic, were detained.”
“At the same time, 12 active members of the criminal group were detained in 14 regions of the country, three of whom are current police officers,” the agency added.

“As a result of the special operation, more than 150 foreign and Russian-made firearms were withdrawn from the illegal traffic: Kalashnikov machine gun, Kalashnikov assault rifles, submachine guns, carbines, rifles (M-16, M-4, G-Z), pistols (“ Glock "," Chaset "," Desert Eagle "," Beretta ") and revolvers, including with devices for silent shooting, grenade launcher, grenades, main parts and accessories for the manufacture of more than 200 weapons, more than 2500 ammunition of various caliber, more 10 kg of explosives and detonation Atory ", - noted in the FSB.

Investigative units of the FSB and the Ministry of Internal Affairs of Russia initiated criminal cases. The withdrawn weapon is directed on technical and ballistic examinations. The issue of additional criminal cases under article 226.1 of the Criminal Code of the Russian Federation (smuggling weapons) is being resolved.

“At the present time, additional operational-search measures and investigative actions are being carried out for procedurally fixing illegal activities of an organized criminal group and establishing the facts of their possible involvement in the commission of grave and especially grave crimes in Russia,” the FSB added.

“The fact that it is open not even by a window or a door, but by a gate for penetration of various types of weapons into the territory of our country is obvious,” he stressed. - The country where there is a civil war, where illegal armed groups own weapons, bandits, can not be different. And, of course, from Ukraine this weapon can spread anywhere - not only to Russia, but also to the countries of the Middle East, the Balkans. ”
“Control over these channels can be strengthened only under one condition ... Only if Ukraine ends the civil war and legal institutions win. And while chaos reigns there, Ukraine is and will remain a zone for unregistered types of weapons, ”the expert noted.

Regarding the channels for the supply of weapons from the EU to Ukraine, Litovkin recalled that Ukraine had purchased weapons in the West under the previous authorities. “There is nothing surprising here,” he said. - Western small arms have always existed in the Ukrainian special units, especially since we must remember that Ukrainian specialists took part in the hostilities of Georgia against South Ossetia and Georgia against Russia. And they are from Georgia, where there was also a mass of Western weapons, which brought a lot of things to their country. I repeat once again that Ukraine is a dump of old Soviet, Western European and American weapons, which will be felt for a long time ”.

"It is clear that the users of these weapons in Russia are criminal structures, because the official armed forces or law enforcement agencies, of course, do not need trunks of unknown origin, it is not known what crimes they committed ... Also, the bandit underground in the Caucasus can be attributed to consumers . It goes without saying. We are talking about gangster and terrorist structures, they are all connected, ”he concluded.

Igor Korotchenko, editor-in-chief of the National Defense magazine, believes that after the events on Maidan, Ukraine "has become an exceptionally convenient transit corridor for the supply of arms to Europe and from Europe to other countries, including Russia."

“And on the territory of Ukraine itself, a situation has arisen when nationalists have a huge amount of firearms in their hands, including those stolen from the warehouses of the Armed Forces and the SBU. All these weapons are looking for a buyer. And the Ukrainian criminal structures and the mafia structures of the West have a desire to export these weapons, including to the territory of Russia, ”he added.

According to Korotchenko, what the FSB has managed to find is only the “tip of the iceberg”. Among consumers of these weapons in Russia, he also sees representatives of criminal circles and separatists from the North Caucasus.

“I think the worst thing is that a lot of man-portable air defense systems fell into the hands of the Right Sector * a year ago. They still have not surfaced anywhere. And among international terrorist organizations, in particular, the IG, there is a demand for such weapons, ”shared Korotchenko.
In this regard, he called on the European security structures, Interpol, to unite with colleagues from Russia to work together to block the supply channels of such weapons.

The expert also suggested that weapons from the EU flow to Ukraine, including through the channels of the Ukrainian diaspora in European countries.

“In addition, Ukrainian nationalists are actively looking for markets in Western Europe. Therefore, criminal ties have been established between groups that are engaged in illegal businesses in Europe - drugs, smuggling - and Ukrainian nationalists. As part of a joint business, they are looking for markets, seeing Russia as a country where illegal weapons can be resold to those who are interested in this, ”he suggested.

Finally, Korotchenko did not rule out that weapons from the EU could also be related to the killing of people on the Maidan in Kiev in the winter of 2014.

“Now nothing can be ruled out. But it is necessary, of course, to investigate these crimes first, because, as we know, so far, the investigation has not been completed. And the current Ukrainian government, apparently, does not want this, ”he concluded.

Earlier, a military expert, Alexander Perendzhiev, told the newspaper VIEW about the strong ties of a number of Ukrainian radical leaders with a bandit underground in the North Caucasus. This relationship has been going on since the days when representatives of the UNA-UNSO * and other radicals directly participated in the battles in the North Caucasus as mercenaries against the Russian army.

We will note that on the eve of Kiev, local security forces blocked the channel for smuggling weapons.

Where it came from is unknown. It was reported only about the detention of a group of persons illegally delivering weapons to Ukraine and planning to sell them in Kiev and the Kiev region, reports Interfax-Ukraine.
During the searches, the attackers seized an impressive arsenal, in particular Glock pistols, M-16 semi-automatic rifles, over 4 thousand cartridges for firearms of various sizes, bullets, cartridges, capsules, gunpowder, tools for assembling cartridges and other spare parts firearms assembly.

On July 17, the president of the country, Petro Poroshenko, promised to pay special attention to countering the illegal circulation of weapons and even to involve volunteers in the fight against smuggling.

According to some reports, in Ukraine 80% of the black market of weapons is exported from the zone of military operations in the Donbass.

In March 2014, the FSB of Russia blocked the channel for the smuggling of weapons from the EU through Ukraine to Russia, to the North Caucasus. Even then, experts were talking about the “factor of instability”, which is characteristic of today's Ukraine and which the criminals take advantage of. For almost a year and a half of hostilities, the situation has only become more complicated.