July 25 2015
14
In the Soviet Union, the Olympic Games were treated as a shrine and an outlet. Do not forget that "for the first time the games are held in the capital of a socialist state." Were proud of the victories of athletes. First of all - team wins in the "unofficial standings". And in the 1970-e big sport in the USSR scored cruising course. After an insulting defeat in Mexico City-68 in Munich-72 managed to win the championship in all respects. In Montreal-76 - almost on the territory of the main rival - the USSR national team took precedence again, while the Americans remained in third place, letting Erry Honecker, the GDR athletes, go ahead with the restless favorites. 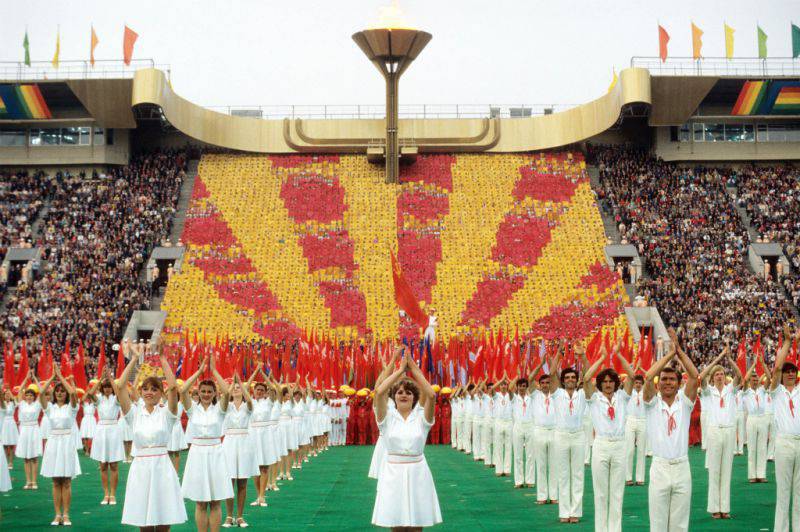 Opening Olympics 1980 of the year.
Photo by Sergey Metelitsa / TASS

And after long hesitations, a “limited contingent” of soldiers-internationalists was sent to 1979 in Afghanistan in December to support the communist government. In the US, they immediately began talking about “red aggression” against a sovereign state.

In the Politburo of the CPSU Central Committee, no one doubted that the Americans would raise a fuss, and they did not even hope for a favorable reaction from the entire diverse world community. But even such experienced politicians as Andrei Gromyko and Yuri Andropov could not predict that Washington would support the Herat uprising on such a large scale, take advantage of the Pakistani outpost, and the campaign in the border state would turn into a funnel.

Carter fully supported those strategists from the CIA who pushed the USSR to aggressive actions in Afghanistan to take rash steps. In mid-January, President Jimmy Carter presented an ultimatum to the USSR: if the troops are not withdrawn from Afghanistan by February 20, the US will boycott the Games. The Kremlin did not give in to pressure, and had no right to give in: one cannot show slack in big politics. Sports committees in many countries did not agree with government directives, called for not to mix sport with politics, not to deprive athletes of the "main start of the four-year period." But Carter went to the end, twisted the nuts to the limit, and the thread did not fall. “Carter,” in this case, is the definition of the whole group of influential supporters of a boycott in the American elite.

After several defeats in the propaganda war, the imperialists outplayed Moscow. With unexpected moves, they, alas, trapped Soviet diplomacy. The declarations of the Soviet Union on the struggle for peace now sounded unconvincing. War in the Olympic year - what could be more rash? Here, even the support of the left forces could not be counted on.

In the USSR, it was assumed that the appearance of a “limited contingent” in Afghanistan would frighten off both the rebels and those who support them from Pakistan and the USA. And - again underestimated the determination of the enemy. 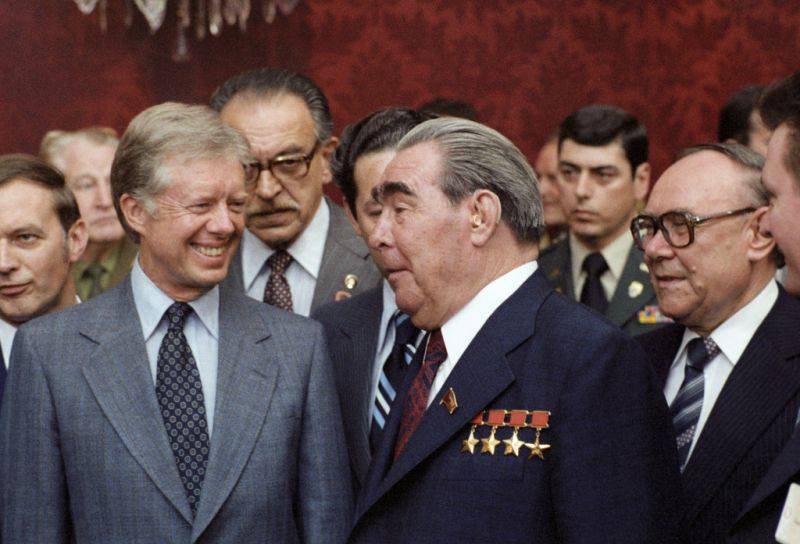 Vein. The visit of the General Secretary of the CPSU Central Committee Leonid Brezhnev to Austria for talks with US President Jimmy Carter. Leonid Brezhnev and Jimmy Carter (right to left) during the meeting.
Photo by Eduard Pesov / TASS photo chronicle /

In the first weeks of 1980, the main foreign policy victories of the Brezhnev era were devalued. After all, 70's are detente. These are well-thought contracts with the USA. A “top-level” smile, a meeting in space orbit, “Soyuz-Apollon” cigarettes ... This is the transformation of the USSR into an energy superpower and the beginning of our country's entry into the international trading system as an independent player, from the standpoint of a strong partner. This is a stumbling block in the American expansion after Vietnam and the unsuccessful international struggle of the leftists against the neutron bomb. The systems did not stop the confrontation for a minute, but they also learned how to find common interests. And after the “invasion of Afghanistan”, the Americans firmly stuck the image of the aggressor to the Soviet window.

As a result, more than fifty countries joined the boycott of the Moscow Olympics. Among them are the friendly states for the USSR ... The brutal reality was a little softened by the fact that dozens of bright athletes (including British, French, Italians, Greeks, Dutch!) Came to the competition on personal initiative and performed under the Olympic flag. When they were awarded medals, the anthem of the Olympic Committee sounded instead of national anthems. Moscow met those who broke the boycott with a special affection: they were glorified by journalists, they were bombarded with flowers. This, for example, the English runner Sebastien Coe, the Italian high jumper Sarah Simeoni, the Swiss cyclist Robert Dill-Bundi, the Austrian beauty - rider Elizabeth Max-Toerer ...

Our journalists caught on to such a comforting fact: for the first time in stories Angola, Botswana, Jordan, Laos, Mozambique and the Seychelles participated in the Olympics. But the total number of countries participating in the Olympics-80, alas, was inferior to the 1960 – 1976 Summer Games ... 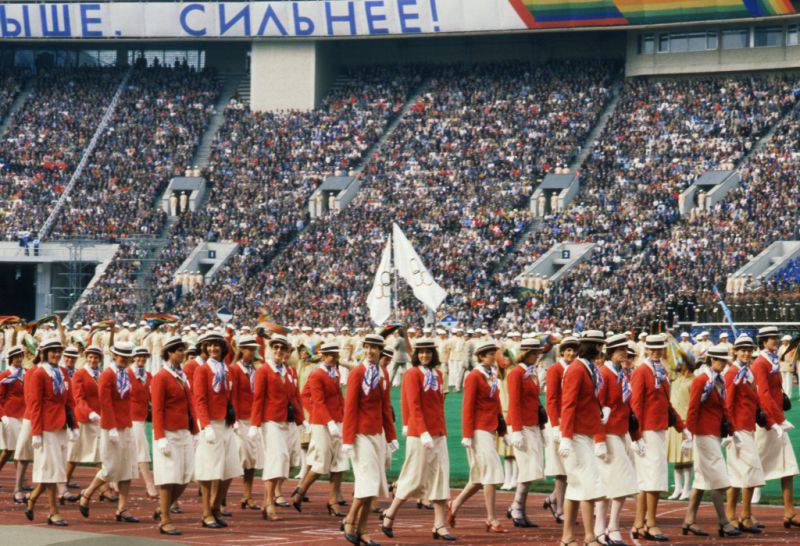 The opening ceremony of the Olympics.
Photo by Yury Belinsky / TASS

However, the athletes did not have to blush: it was a top-class competition. After all, Moscow managed to beat the 74 Olympic, 39 European and 36 world records. The record of the Soviet shooter Alexander Melentyeva, set on the first day of the Games, was exceeded only in the 2014 year. The highest results were shown by swimmer Vladimir Salnikov, as well as Soviet weightlifters and gymnasts. Four years later, the Summer Olympics will be held in Los Angeles, in the USA. There will be no Soviet athletes and representatives of most of the socialist countries. Boycott again and seemingly less representative than in 1980. But let's look at the sports results: 36 Olympic records, 11 world ... Not enough compared to the Moscow Games.

The Olympiad took place in spite of everything, contrary to the strategic miscalculations of politicians. And took place in Moscow. The organizers of the Games, architects, athletes and coaches could put this great sports festival on the line. And the artist Viktor Chizhikov, who created the unforgettable Bear? And the composer Alexandra Pakhmutova, who composed “Stadium of my dreams” and “Goodbye, Moscow” for the Games? But the choreographer Yuri Grigorovich, who thought out the amazing festive choreography? And the "competent authorities" who did not allow excesses? 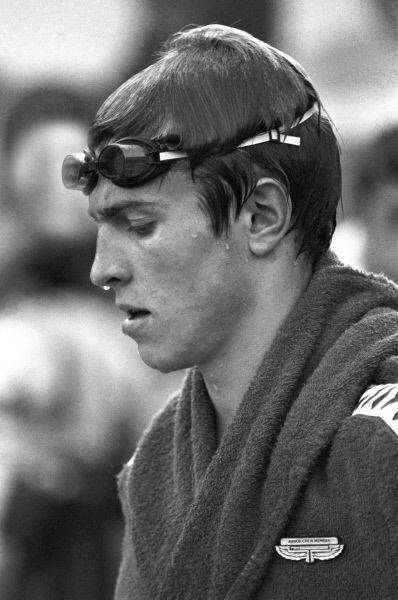 Soviet athlete Vladimir Salnikov - champion of Europe and the world 1978, a member of the USSR Olympic swimming team.
In the future, he will become a four-time world champion, a five-time European champion, a four-time Olympic champion, during his sports career he overcame a distance equal to the length of the equator.
Photo by Yuri Somov / RIA News
American athletes did not come to Moscow. The USSR national team failed to defeat the main rival in front of the native public. Tourists and TV broadcasts, of course, were significantly less than expected. The most practical officials reasonably talked about wasted money ... Although the Olympic facilities still serve Moscow, and the spectacular opening and closing ceremonies of the Games became an example for future sports forums ... The warmth inherent in the Soviet people of that time was remembered by all guests of the Games. The successfully found image of the departing Bear will not be forgotten in Russia for a long time: this is one of the symbols of the popular impulse, happy, but with bitterness. If desired, a masterpiece of mass art.

And we all remember how joyful Moscow was in the summer of 1980. The Olympic tale has developed and still remains a happy memory. And on the sports fields, the USSR national team proved superiority at the Goodwill Games in 1986 and at the Olympic Games-88 in Seoul.