Germany has not learned the lessons of history?

July 23 2015
36
They say: how many people, so many opinions. However, assessments of politicians close to non-public, insider information always deserve attention. Last Tuesday, two well-known people in the country, Mikhail Gorbachev and Vladimir Zhirinovsky, spoke on the same topic. The leader of the Liberal Democratic Party during the Open Tribune meeting in the State Duma suggested that in the next two years Germany, through Ukraine, would start a war with Russia. The ex-president of the USSR, at the presentation in Moscow of the book by the German politician Wilfried Sharnagol, attended to the deterioration of relations between Russia and Germany and called for restoring the previous level of trust between the countries. 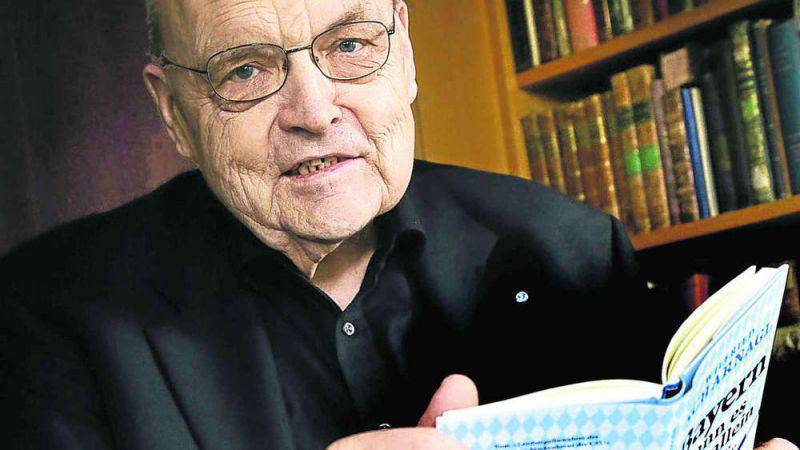 Mikhail Gorbachev at the presentation was not just. He wrote the preface to Willow's Scharnagl's book "The Catcher". Sharnagly 76 years. Close in age to Gorbachev, he is infinitely far from the Russian subject. In Germany, the author of the new essay is known as a journalist and politician specializing in domestic politics, mostly Bavaria. For a long time, V. Sharnagl was the chief editor of the newspaper of the conservative Bavarian Christian-Social Union (CSU) Bayernkurier. Now, in his old age, he showed himself in international journalism by publishing “political notes” (as the author defined the genre of the book), in which he critically assesses the Western approach to the Ukrainian crisis and proposes to stop the sanctions, recognize the current status of Crimea and conduct a federal reorganization of Ukraine.

In Germany, the book "The Catcher" was not taken seriously. There are several reasons for this. First of all, the author is not an expert on Russia, which, in the eyes of the local politician, reduces the value of his conclusions. Moreover, without knowing the Russian language, Sharnagl constantly refers to German sources, which to some extent is a repetition of facts already known in Germany. At the same time, one cannot say that the veteran of Bavarian journalism did not understand the nature of the conflict in Ukraine. However, his assessments, which radically differed from the view that dominated in German society about the Ukrainian events and the role of Russia in them, did not shake the prevailing opinion. Perhaps even now it is beyond the power of an authoritative expert; too few leading German politicians share the point of view of Wilfried Scharnagli today.

But they say a drop wears away a stone. Little by little, an adequate assessment of the Ukrainian events began to leak into the Western media. And not only in Germany. Recently, for example, journalist Bi-bi-si Gebriel Gatehouse interviewed the ex-president of Ukraine Viktor Yanukovych. During the broadcast, the British correspondent in relation to Donbass used the term “civil war”. From the BBC such an assessment for sure no one was waiting. She persistently and consistently fulfills the Western version of the Ukrainian conflict. The editor of The Ecologist, Oliver Tykell, wrote: “Recently, the phrase“ Russian aggression ”has become a kind of“ meme ”on the BBC. The British corporation, constantly reminding of the “aggressiveness” of Moscow, sets up the people of Great Britain against Russia. ” And here is a passage.

A new assessment of Ukrainian events has angered, first of all, Kiev propagandists, who are accustomed to the continued support of the West for their Russophobic position. Thus, the journalist Alexander Severin not only challenged the use of the term "civil war", but also wrote a complaint to the TV channel. In his opinion, what is happening in the Donbass should be called "Russian aggression." The British Embassy in Ukraine demanded an explanation from the BBC.

It is difficult to say why the corporation did not apologize and make excuses. This can hardly be explained by the desire to objectively cover world events. The same Oliver Tickell in his article noted that the BBC strictly adhere to its ideological orientation and experts with a different point of view are given the word extremely rarely. Most likely, this was due to the inherent British confidence in their own infallibility and superiority.

Be that as it may, the BBC supported its journalist and insisted on the right to call the events in the Donbas a civil war. “There is no generally accepted definition of a phrase or when to use it. Nevertheless, the fighting of Ukrainians against Ukrainians for the future of their country is large enough to justify the use of this term "civil war", - such a conclusion of authorized lawyers is given in the responses of the corporation to employees of its embassy in Kiev, complaining to Ukrainians and other propagandists.

The Ukrainska Pravda, which joined in the disassembly, tried to keep up the heat of the discussion and recalled that the term “civil war” regarding events in the Donbas was not used in any of the international documents. But the BBC remained unconvinced and did not even give the Kyiv newspaper a personal response.

But back to Germany. Here, too, the people turned against Russia. It happened long before the Ukrainian events. The special relations of our countries, formed during the reign of Helmut Kohl and Gerhard Schroeder, with the coming to power of Angels Merkel underwent significant changes. As experts admit, the former mutually beneficial ties of the new German cabinet preferred to transform into their one-sided advantages by exporting industrial goods of high redistribution to Russia in exchange for gas, oil and raw materials.

Attempts by Russian leaders to achieve mutual investment penetration each time came across serious opposition from German partners. Perhaps the most striking example of this was the failure of the transaction on the purchase of Opel shares by the Russian Sberbank. Then the whole blame was placed on General Motors, who allegedly did not want to share technology with the Russians. Less attention was paid to the fact that the preparation of the transaction itself was accompanied by protests of Opel workers and group leaders who disagreed with it. It happened for a reason. That year, the German media have already begun work on the destruction of existing relations. The reason was the gas conflict in January 2009 of the year between Russia and Ukraine, in which Germany took a tough anti-Russian position.

Merkel realized that this is a serious lever of pressure on Russia. Then for the first time, contrary to logic, Germany blamed Gazprom and the Russian government for everything, disregarding Ukrainian debts and theft of transit gas. It is very similar to the current situation, when Kiev is not fulfilling the Minsk agreements, and reproaches from Berlin are pouring on Moscow. However, Marshal Zhukov noted that the Germans are not very innovative, and often rely on proven practices. So here it worked in 2009, it gives the result today.

Then all of Europe joined in the condemnation of Gazprom’s actions. Now exactly the same thing is happening, but in relation to the whole country. The first violin is played here by the German media. At the time of the gas conflict, they pretty frightened the Germans. So much so that even the workers of Opel were agitated, before whom the prospect of transition under the control of Russian business was drawn. The media did not calm down even after the failure of the deal. Their anti-Russian rhetoric has become a means of promoting the entire policy of the Chancellor Merkel’s cabinet.

Its result was recorded by the ARD-DeutschlandTrend survey conducted this year. As the agency indicates: "A comparison with archival data showed that the degree of distrust of the Germans towards Russia is comparable to that that existed during the Cold War."

“The loss of trust is a process that has been going on for several years now,” said Christian Wipperfurth, a Berlin-based political analyst at the German Society for Foreign Policy, who commented on the survey results. He noted that German sympathy for the Russians reached its peak in 2003, when, together with the government of Gerhard Schroeder, Russia opposed the war in Iraq. Under Merkel, this figure only decreased.

By the way, I note that Berlin’s anti-Russian policy fits in with its frank egocentrism. Having embarked on an aggressive promotion of their goods in Europe, the German cabinet contributed a great deal to the collapse of industry in the east of the continent. Ukraine has also come under the distribution, the association with which opened for the Germans a new serious market. Not by chance, the refusal of her became the verdict to the team of Yanukovich, blew up the situation in the country, led to a dramatic and bloody crisis. Germany used it as a new opportunity to pressure Russia, to weaken it.

What made the Bundeswehr sober

The sanctions imposed by Berlin against our country sharply reduced German exports to Russia. The head of the Eastern Committee of the German economy, Eckhard Cordes, predicts a reduction in the volume of goods from Germany by a quarter this year, or 9 billion euros. Last year, industrialists grumbled on emerging trade barriers. Today they have subsided. Of course, individual firms suffered losses due to sanctions and continue to suffer. But, in general, the German economy has adapted to the new conditions.

Recently, the Bundesbank raised its forecast for German GDP growth in 2015. Now the bank expects this figure within 1,7%. In the previous forecast, GDP growth was barely one percent. German exports will also increase, mainly due to non-EU countries. In this regard, it is not surprising that the German establishment began to jointly support the policy of Angela Merkel and pay little attention to those who disagree with her, such as the Bavarian political scientist Wilfried Charnagly.

The anti-Russian course of the German cabinet was also encouraged by the armed forces of the country - the Bundeswehr. The other day in the Ukrainian city of Yavorov, in Galicia, the Rapid Trident exercises began. The active participants in these maneuvers were the German military. The ships of the German Navy are preparing for the Sea Breeze exercises, which they will conduct together with the Ukrainians and their NATO partners.

Inspired by the Ukrainian events, the German military prepared for the implementation of nine defense projects at once, the costs of which are close to 60 billion euros. The range of projects - from assault rifles to high-tech missile systems Meads. Of course, the Germans did not forget about the new armored vehicles, modern aircraft, including helicopters and drones, artillery systems, fleet.

The Bundeswehr retrofit program is designed to 2020 year. Therefore, in a couple of years, as Vladimir Zhirinovsky predicts, he is unlikely to be ready to attack Russia. But splashing oil into the flames of civil conflict in Ukraine and engaging Germany’s forces in the disassembly of our country will be enough. The nature of aggressive volleys of the German media suggests that they are not going to reduce the intensity of the propaganda war. Germans want to finally quarrel with the Russians. Will these actions escalate into a hot war? The question to which today there is no definite answer.

... categorically "against" only история. In the last century, the Germans brought war to the world twice, and both times they lost with a bang. So much so that then decades went to rebuilding the country from the ruins. Looking at the present prosperous Germany, few people now remember that in the post-war period both times experienced a severe famine here. Germans must learn this tragic history lesson firmly ...