Soft power? This is not about Russia

July 23 2015
49
The Soft Power 30, a soft power rating from Portland (a PR agency based in London), appeared on the network. It is easy to guess which country was in the honorable ranking first. Great Britain is followed with a small margin completely by the allies and leaders of Europe: Germany, the USA, France, and then Canada, Australia, Switzerland and Japan. Closes the "top" of the thirty states of China. Russia did not hit the first three dozen. 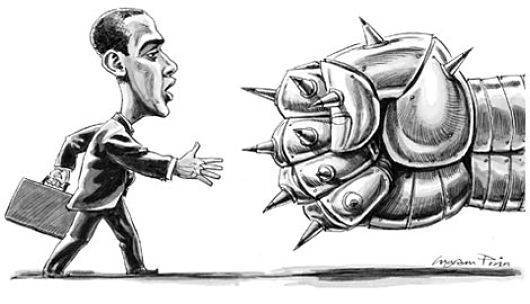 "The Soft Power 30" from the company "Portland" you can look through here. You can read about the indicators of countries here. A press release in pdf format is available at this link. Everything is in English.

We will try to briefly present the material in Russian and give the opinion of experts.

The authors of the report consider “soft power” the ability to “pull” rather than “push” (the latter is characteristic of strength as “hard”). If “hard” force is based on coercive measures: the use of force, threats of force, economic sanctions, etc., then “soft” does without coercion and builds on the attractiveness of the country and the ability to convince, aimed at achieving foreign policy goals. Soft power avoids the traditional instruments of foreign policy - "carrot" and "carrot".

The creator of the concept of soft power - Joseph Nye. Initially, he identified three main sources of soft power: political values, culture, and foreign policy. However, within these three categories, individual sources of soft power turned out to be so diverse that the authors of the report calculated their “index” using more than 65 indicators for six “sub-indices of objective data”: business climate, culture, information, government, foreign policy and education . 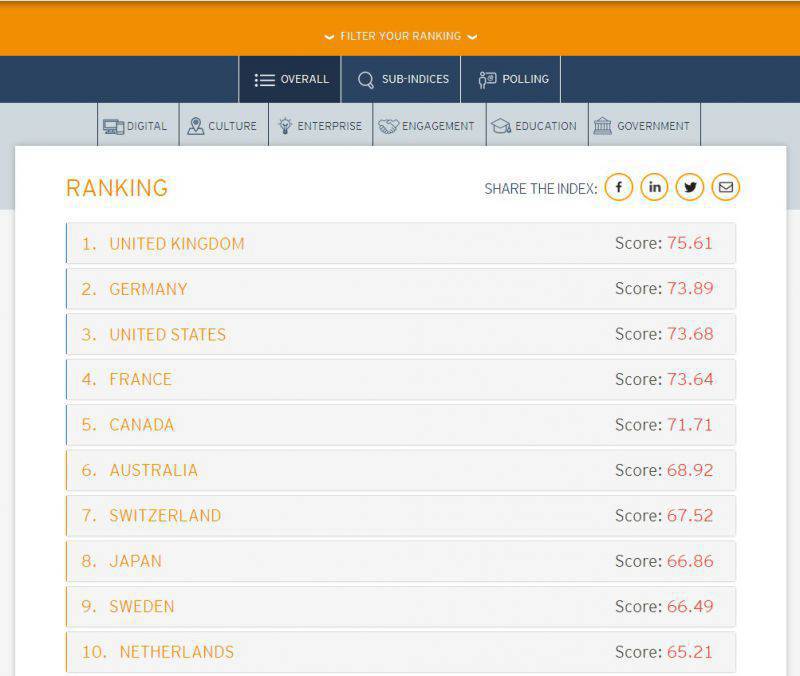 So, the rating of the British agency was headed by the United Kingdom. This is beyond doubt, the report indicates, although this result contradicts some claims that British influence is now in decline.

Compilers rating even note in a review that Vladimir Putin ridiculed Britain - they say, "no one listens to these" small island "residents." But are Putin’s words combined with the UK’s participation in G7, the UN Security Council, NATO, the European Union? ..

British soft power is everywhere, and it is often expressed very delicately - through the Beatles, Harry Potter, Shakespeare, the royal family, and so on. And the success of the 2012 Olympics of the year allowed the country to gain confidence. In addition, in many respects London has overtaken New York as the main global city.

In terms of business climate, Britain is also ahead of the rest: according to government data, it attracts more foreign direct investment than Germany, France or Spain.

RBC notes that Portland used subjective assessments in its indices.

If the six subindexes described above (business climate, culture, informatization, government, foreign policy, and education) can be measured, then subjective indicators are based on a survey. A network survey in which 7250 people from 20 countries, including Russia, participated, was conducted from 21 in May through 8 in June by ComRes. Respondents evaluated the characteristics of the country: the cuisine, the friendliness of the citizens in relation to tourists, technology, luxury goods, as well as confidence in the country's behavior in the international arena, the desire to visit it, the country's contribution to world culture. The total Portland index was built in two parts: objective indicators "weighed" 70%, subjective - 30%.

Knowing this approach, it is not difficult to understand why Germany was second, and the United States behind it.

Germany in recent years has been a driving force in European politics. In addition, the quality of the goods produced by the Germans is known. Finally, Germany was given high marks by respondents.

The United States would have won by objective indicators, do not be in the subjective rating. But according to the survey, the States took only the 16 st position: the Americans were let down by the perception of Washington’s foreign policy in the world.

Fyodor Lukyanov, the chief editor of Russia in Global Affairs, told RBC that the rating results are completely logical, especially with regard to the United Kingdom and the United States.

“What is soft power? This is an image. And the image is formed by the media. The fact that the Western media is obviously dominant in the world - and especially Anglo-Saxon - is a fact. Accordingly, the image is built very attractive and positive, and the positions in the ratings are high. ”

The thirtieth (the last in the top-30) position of the PRC, however, became a discovery for the authors of the rating. After all, the Celestial Empire invests large funds precisely in the tools of “soft power”: Hu Jintao issued the corresponding directive in 2007 year, the then Chairman of the People's Republic of China. The material lists Confucius Institutes, the Beijing Olympic Games, and the 2010 Expo in Shanghai. But the negative impact of Chinese censorship, repression, problems with minority rights spoiled the big picture.

Take a look at myself ranking. Even Turkey, with its prone to autocracy and dispersal of demonstrations by Erdogan, who had not so long been willing to reshape the constitution and claimed the role of "sultan", turned out to be higher than the PRC - in 28-th place. Even crisis Greece takes the 25-place.

Returning to the material "RBC".

Jonathan McCleory, a partner of Portland, who is responsible for the practice of territorial marketing, told the agency that Russia almost reached the top thirty.

Russia's top marks were in the “education” category. It turned out that literacy rates are extremely high in Russia. In addition, the country attracts a large number of foreign students.

The picture was hopelessly spoiled by corruption, poor conditions for entrepreneurship, and problems with innovations.

Subjective criteria also let us down. “Another factor that has pulled down the overall assessment of the country is the results of an international survey conducted in 20 countries,” said Mr. McClury. - In particular, Russia scored few points in the issue of international public confidence in the country - the belief that the country "will make the right choice in global politics."

Fyodor Lukyanov with a rating overall agrees. He believes that Russia is more inclined towards hard power than soft: “The fact that Russia is in rather low positions really reflects the system of priorities that we have ... Soft power is not our priority, this can be seen An example of a variety of situations. Ukraine is the last clear case. ”

In our opinion, the last place in the top-30 of China (which the authors themselves were surprised by), getting a Greek semi-bankrupt to a higher 25 place and excessive protrusion of the native Britain (including through Harry Potter) do not allow to fully trust the rating from Portland. The weight of the "soft power" in the United States is striking at all. After all, 3-place practically means that “white and fluffy” Washington shuns not only the use of force, but even threats of use. The imposition of economic sanctions is also not a method for Washington.