Death of cornet Biryukov and 48 Khopertsev 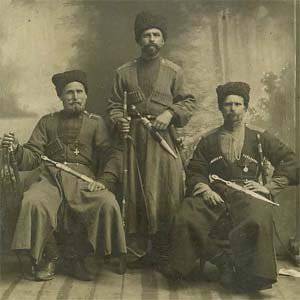 In the military life of the Cossacks in the Kuban, often a blind case forced the Cossack to either fight the enemy until the last tension and remain the winner, or lay down their heads in an impossible struggle. Letting the Circassians capture an armed Cossack was considered a disgrace, and the captivity itself threatened with slavery and all the horrors of servitude to hostile people.


Under such conditions, an 30 event occurred in March 1842 of the year near the Kharpachuk River, one mile from the Bolshoy Zelenchuk river. Here 49 Cossacks, under the command of cornet Biryukov, happened to collide with 150 mountaineers and horsemen returning from the raid. And the case immediately took such a turn that neither one nor the other party could not avoid a collision.

At night, on the eve of March 30, the mountaineers broke into the Batalpashy village, burned 6 yards with all sorts of property, 86 fathoms of the stanitsa fence and left from prosecution. Who were these mountaineers and how much, no one knew. There was an alarm on the line, and various rumors between the Cossacks began.

When exaggerated rumors about the attack of the Highlanders on Batalpashinsk and about the alleged captivity of the Cossack population reached the head of the Khumarian section of Biryukov, he immediately jumped with the 64 Cossacks and two officers to the Zelenchuk, in the calculation to cut the way of the Highlanders. On the 13 road, the Cossacks landed. Biryukov sent them back to the line, leaving the team as part of the 51 man.

Khopertsy jumped on. But on r. Kharpachuk, approximately at the present village of Operative, they unexpectedly jumped on a batch of highlanders in 150 horsemen. There was no time to retreat. Having sent a Don sergeant and a Khoper Cossack Fenev with news to the village of Batalpashinskaya, Biryukov ordered the Cossacks who remained with him to dismount and “strop horses”, that is, to lay the animals on the ground. These living carcasses made up the fortification, behind which the Khoperians hid, in the sight of the highlanders rushing swiftly towards them.

After exchanging shots from both sides, as a result, the killed and wounded, Circassians and Cossacks entered the battle. Unusual courage and self-sacrifice, along with a thirst for struggle and destructive strivings, were found on both sides. It seemed that people were brutalized and lost their human properties. Death mowed its sharp oblique of people to the right and left, regardless of either the Cossacks or the Circassians. Cossacks butts killed the highlanders, the mountaineers with their swords blew the heads of the Cossacks. There was no room for despair and mercy.

But everything has an end. The highlanders crushed their numbers Cossacks. Not a single Khoperets surrendered. Only the Cossack Sidor Melnikov, all wounded, miraculously escaped from this hellish carnage and managed to gallop off to Batalpashinsk.

When a detachment arrived from Batalpashinsky at the scene of the battle, a picture full of horror presented itself to the eyes of the Cossacks. At the scene of the massacre lay 19 dead horses and 49 Cossack bodies.

All the Cossacks were stripped naked, robbed and their blood stained wounds gaped on their bodies. Each of the fallen Cossacks had several such wounds. There were gunshot wounds, chopped checkers, stabbed with daggers. On the body Biryukov turned 8 bullet wounds, 8 dagger and 7 saber. In a bloody battle and brutal bitterness, the mountaineers, perhaps, it seemed that was not enough.

The killed Khoperians were taken to the Batalpashy and Belomechetskaya stanitsa. Most of the dead consisted of residents of the latter. They were buried here in a mass grave.

We are in Yandex Zen
Formation of the Kuban Army
Feat Ikansko hundreds
9 comments
Information
Dear reader, to leave comments on the publication, you must to register.