In Ukraine, losses among security officials were counted - a discrepancy, however ...

July 22 2015
24
The website “Remember the dead” (“The Book of Memory”) operates in the Ukrainian segment of the Internet, which, according to its creators, presents “all information about the dead” during the so-called “anti-terrorist operation”. The Book of Memory presents lists of the dead, both in the security agencies of Ukraine (the Armed Forces of Ukraine, the National Guard, the Border Guard Service, the Interior Ministry, and the territorial battalions), as well as in individual units of these security agencies, including such battalions and regiments as Aidar, Azov, etc. .

The site is quite informative in the sense that it is possible to gather information about the dead foreign mercenaries who fought on the side of the Kiev punitive detachments. Despite the fact that the site is not so much a real memory book, as an attempt to bring to the public the number of losses, at times less than the real losses among ukrosilovik and foreign mercenaries, it is worth paying attention to the range of hired forces that arrived in Ukraine to with weapons in the hands of planting a new "order" in the regions of Donbass. In this regard, it would not be superfluous to submit a list of donor countries of mercenaries (together with data on the number of dead among these mercenaries).

The interests of the henchmen of the West in Ukraine, according to the information of the “Remember the dead” website, were defended by citizens of the following states: Armenia, Belarus, Mongolia, Cuba, USA, Azerbaijan, Turkmenistan, Georgia, Kazakhstan, Latvia, Estonia, Moldova, Uzbekistan, Kyrgyzstan, Sweden, Czech Republic, Hungary, Germany. The greatest number of dead mercenaries from the specified list - German. Those, according to the portal in question, are seven. The greatest number of mercenaries killed in Ukraine in general are Russians. Those of 54 man. Attention is drawn to the fact that on ukroportal Chechnya is indicated by a separate state - “Ichkeria” (the number of liquidated mercenaries - 1).

And still worth paying attention to the fact that during the "ATO" in the Donbass, according to reports from the "Book of Memory", not a single Polish and not a single Lithuanian mercenary, although according to numerous reports of the militia of the DPR and the LPR, several Polish and Lithuanian Punishers were destroyed in the Donetsk airport and in the area of ​​the village of Stanitsa Luganskaya. This fact seems to be the first to say that the portal is not inclined to tell its readers the whole truth about the victims from the Ukrainian side in the area of ​​the Kiev punitive operation, and it is not at all inclined to tell the truth about how many civilians Ukrainian security forces killed along with foreign mercenaries in Donetsk and Lugansk regions.

Another example of lies in the "Book of Memory" is given by the usual arithmetic operation, called the addition of natural numbers. Using the data of the graph of the death toll in the "ATO" by months, you can get the result (data presented on 17 June 2015 year) in 2368 people. Interestingly, above the graph, the data are presented in the form of information about the victims by region. By adding these values, we get the 2273 dead. That is, 95 people from the mournful list somewhere disappeared right there. You might think that 2273 - this is excluding foreign mercenaries, but in the list of those - 97 people, along with the dead, of unidentified citizenship. Already something does not converge ...

However, this is not the most surprising thing - well, you never know, all of a sudden a person “made a mistake” on 2 when calculating or in the process of identification ... Awesome begins when you pay attention to the table with the number of dead by age on the same page. It turns out that the overall result is 2064. That is, the 209 (!) People “disappeared” from the list of the dead. 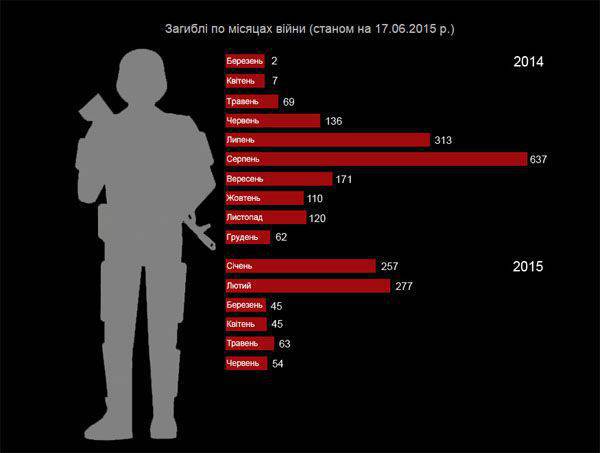 Summarizing the quantitative data on the dead and the dead by individual departments of Ukraine, it is possible to obtain a new value - 2370 people.

Once again, it should be noted that all these contradictory data are presented on one page Site "Book of Memory", claiming to be the source of objective information about the number of dead Ukrainian security officials and foreign mercenaries ...

Now you should pay attention to the fact from whose, if it can be so in this case put it, Ukrainian Ukrainian security forces and foreign mercenaries died. The list is truly the richest. Here are just a few variations from this list:

Soldier Vasyl Goncharenko died of disease after a wrong diagnosis.

Senior Sergeant of the Border Guard Service of Ukraine Viktor Chalapko (43) died near the city of Artyomovsk from heart attack.

Junior Sergeant Dmitry Andrusenko died as a result fatal confluence circumstances. Its at Donetsk airport killed fellow watchwho heard the noise and regarded it as an attack on the airport.

That is, the causes of losses in the camp of the Ukrainian security forces are: "terrorists", "militants", "Russian soldiers", "unknown in camouflage", as well as heart attacks, and even their own colleagues. And as soon as the Ukrainian security officials confront all this? .. But it’s not important ... It’s important that the list of casualties doesn’t indicate the authorities of the country, who throw everyone into the mouth of the civil war as part of the new and new waves of mobilizations mowing down the population of the country. What are the 2 thousands of dead soldiers and officers in question, if under one of Ilovaisk, according to the well-known Semenchenko, ukroarmia lost more than a thousand security officials. Or is the bulk of the losses still recorded as "missing" or "temporarily absent from the battlefield"?

By the way, from the "Book of Memory" law enforcement agencies can easily install one more important detail. This is an approximate percentage of criminals fighting as part of the units of the Right, Azov, Aydar, and others.