Hypocrisy of the OSCE SMM. The withdrawal of heavy equipment by the armies of the DPR and LPR was called by the head of the OSCE mission in Ukraine "intensified displacement"

July 21 2015
44
Representatives of the DPR and LPR armies complete the withdrawal of heavy equipment from the contact line unilaterally. Tanks, BMP and other equipment are removed from the front line by an average of 3-4 km. The process of reclaiming equipment, which Donetsk and Lugansk called an act of goodwill, was closely monitored by OSCE representatives, who were called upon to monitor the implementation of the Minsk agreements. Initially, the DPR and LPR said that they were satisfied that the OSCE was monitoring the removal of heavy equipment from the contact line, and that this could push Kiev to similar measures. However, after the publication of the OSCE report, it turned out that the DPR and LPR pinned great hopes on this organization.

It turned out that in their report the representatives of the special monitoring mission of the OSCE called the withdrawal of equipment by the armies of the DNR and the LC not at all as a withdrawal, but as “increased movement”. Deutsche Welle cites the words of the OSCE SMM head in Ukraine, Alexander Hug:

At present, we can observe increased movement of armaments. This does not indicate a challenge. 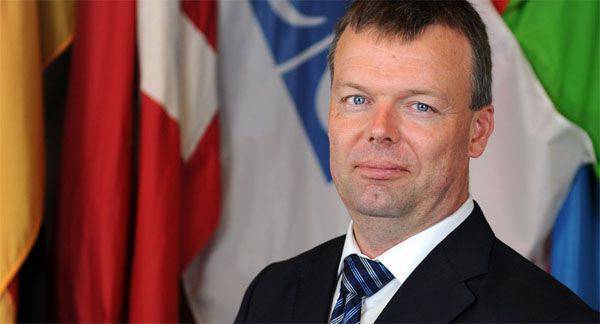 Apparently, Mr. Hug is committed to using Kiev terminology, in which the entering of the Ukrainian army into the boiler is fixing it on the bridgehead, the Ukrainian punitive divisions of the Donetsk, Gorlovka, and other cities quarters are fired upon, and the withdrawal of the militia equipment is not retraction, but enhanced movement. And the one-sided exit of the militia from Shyrokyne is an advance in the opposite direction with the aim of misleading the Ukrainian army? ..