In Donetsk, a monument to Uncle Vasya was installed, and the ukrokrateli “congratulated” the Donbass on the Day of Metallurg 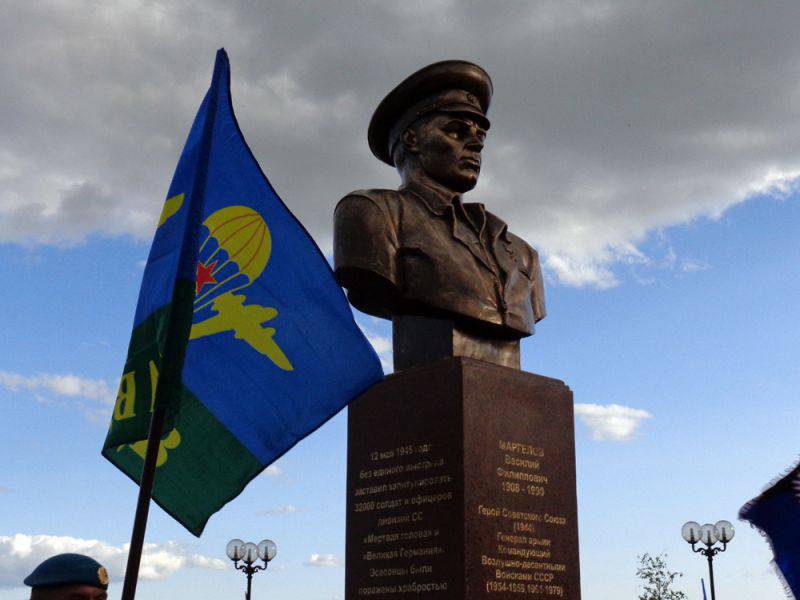 Start this report, it is probably worth a good news. On July 18, a monument to the outstanding Soviet military commander Vasily Filippovich Margelov was officially inaugurated in Donetsk, whom the paratroopers call Uncle Vasya.

The legendary commander of the Airborne Forces (from 1954 to 1959 and from 1961 to 1979), the Hero of the Soviet Union, during the Great Patriotic War, Vasily Filippovich made an enormous contribution to the liberation of Donbass from the Nazi invaders. In 1943, Margelov commanded the Mius Front breakthrough, and on 17 in July this breakthrough was carried out, which allowed our troops to release Saur-Grave in the future. The one that sounded in all the reports in the current war, the one where the destroyed monument stands, the one where the modern militia caused the fire on themselves ... 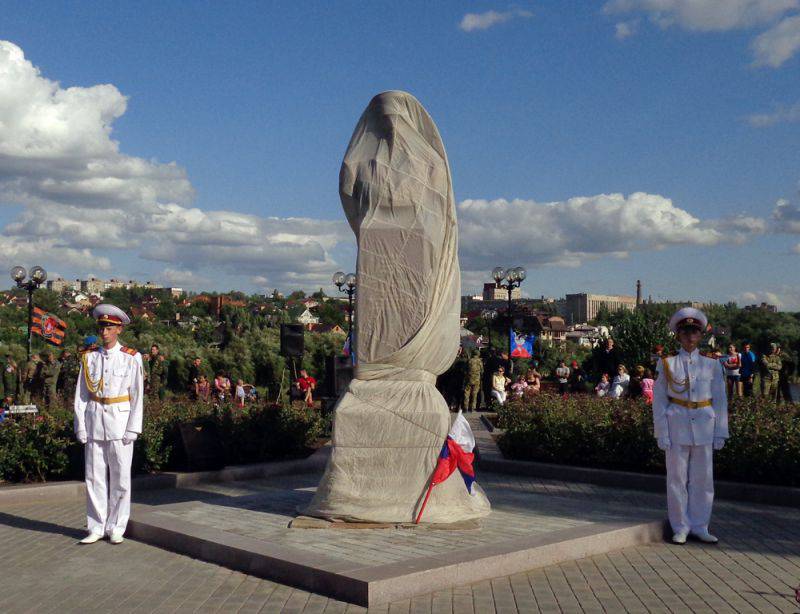 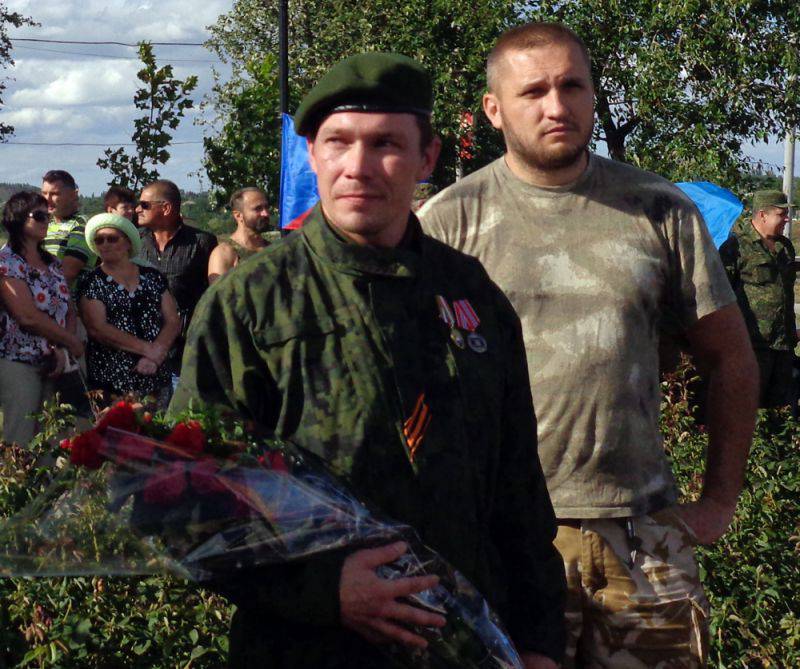 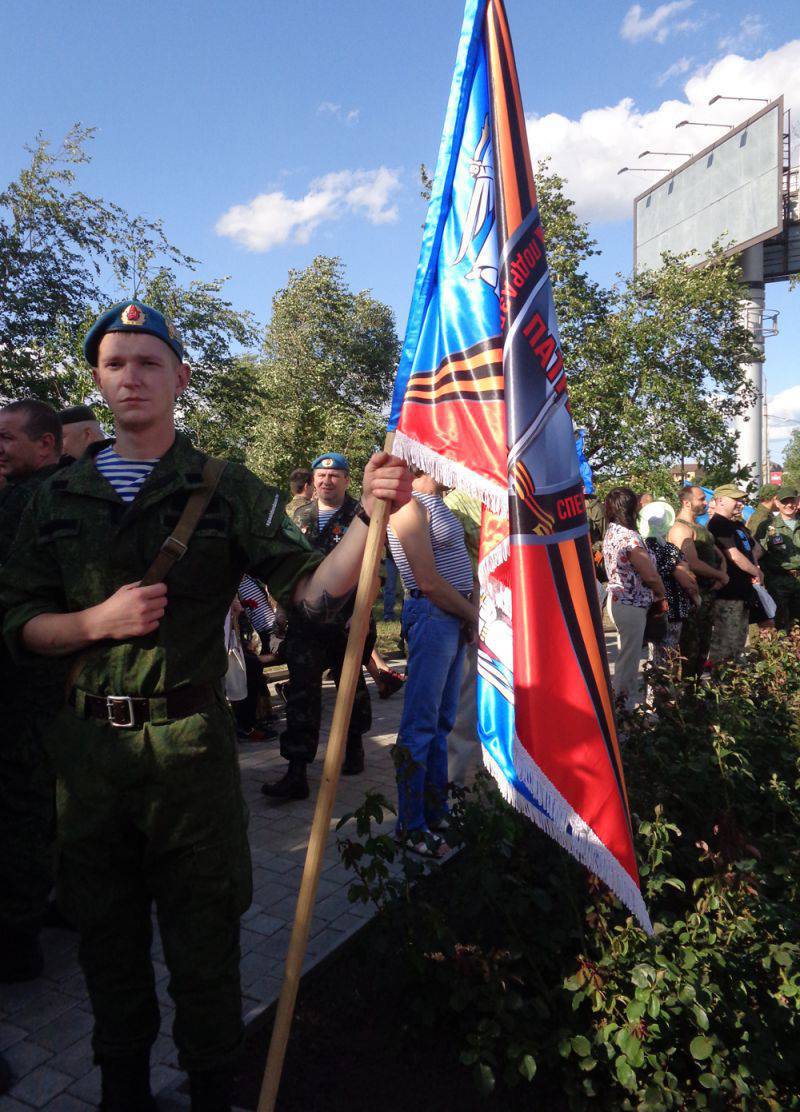 Thousands of people gathered for the opening ceremony of the monument. Both military and civilians were present. 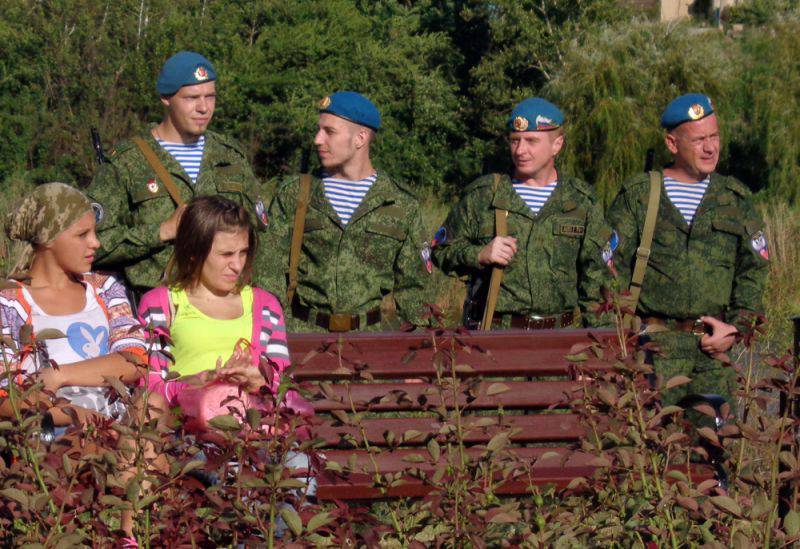 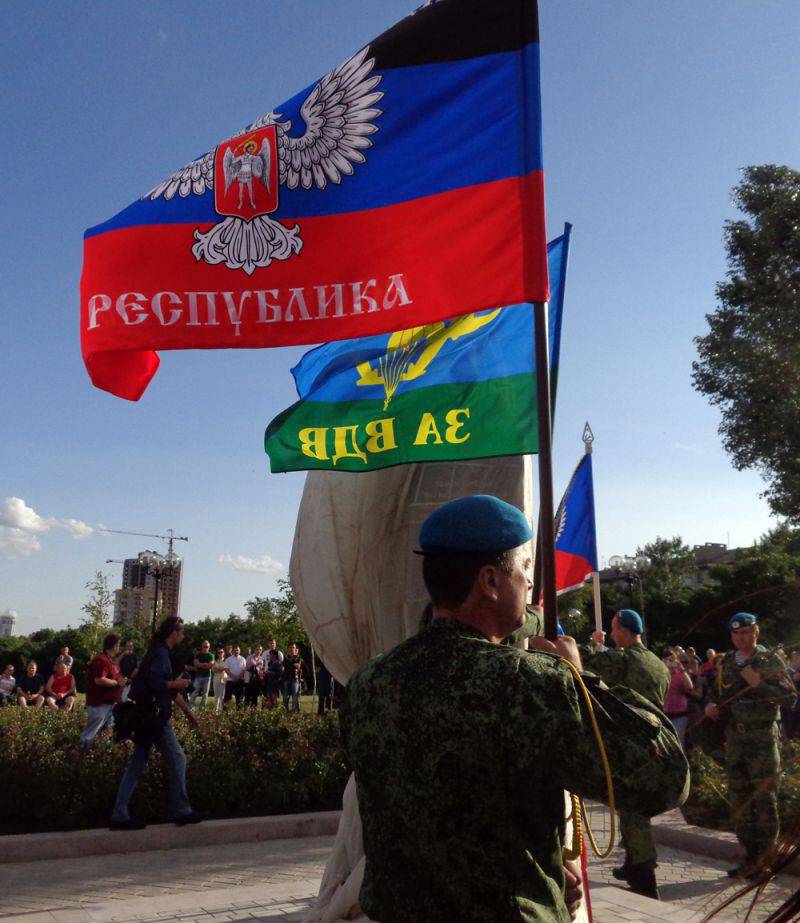 The commander of the "Fifteen" Abkhaz came with his little son. 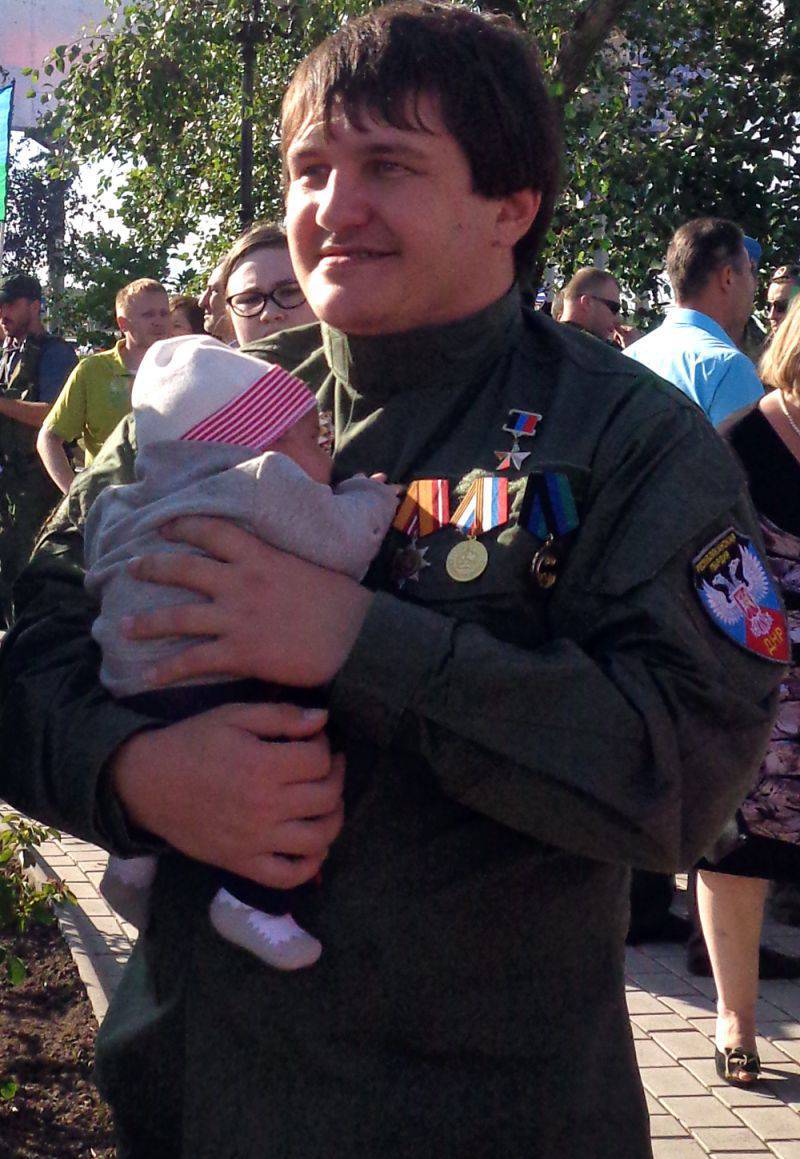 Poets and militia bards performed poems and songs - both famous paratroopers and those dedicated to the current war. 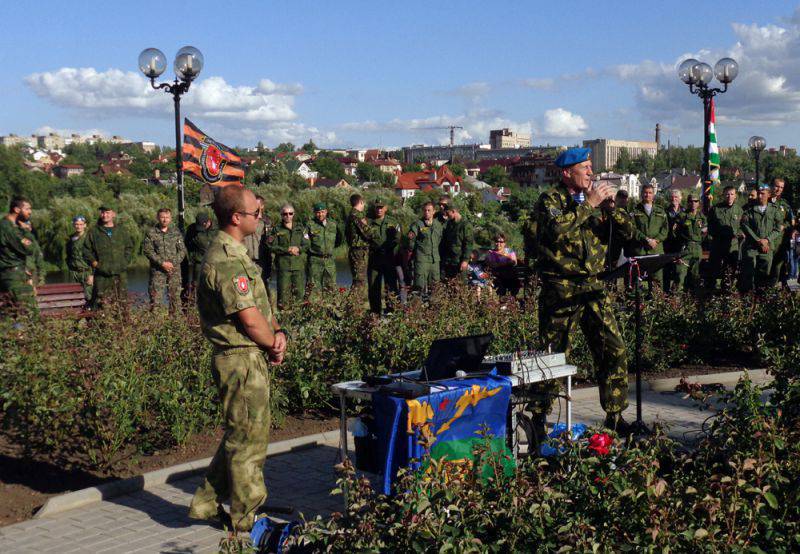 Representatives of the All-Ukrainian Union of Soviet Officers launched the Red Banner. There were also flags of friendly South Ossetia and Abkhazia. 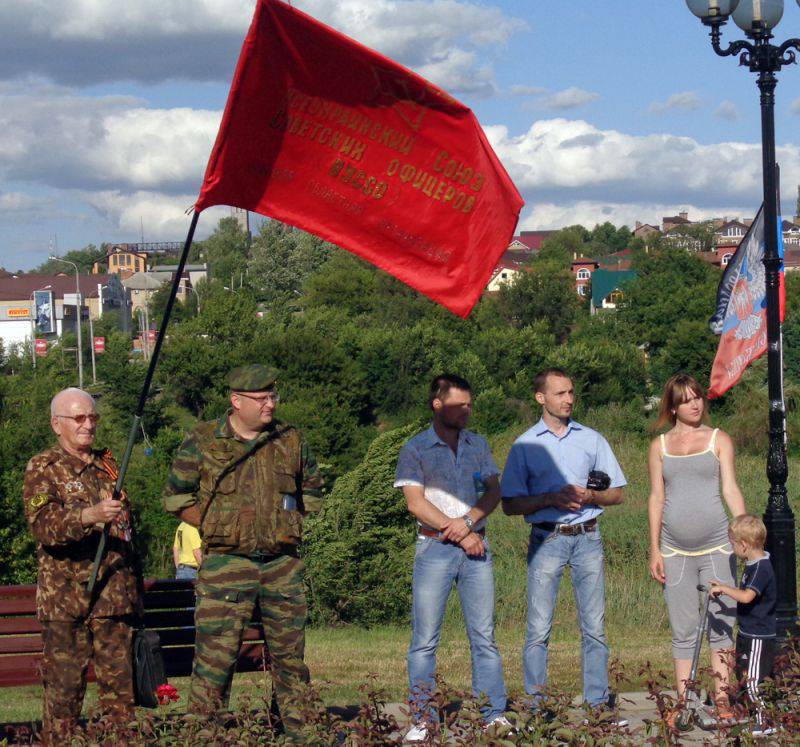 The Minister of Foreign Affairs of the Donetsk People's Republic, Alexander Kofman, said: “We are opening a monument to the man who freed the Donbass from fascism. This is the guardian of our land against the evil spirits that climb here. ” 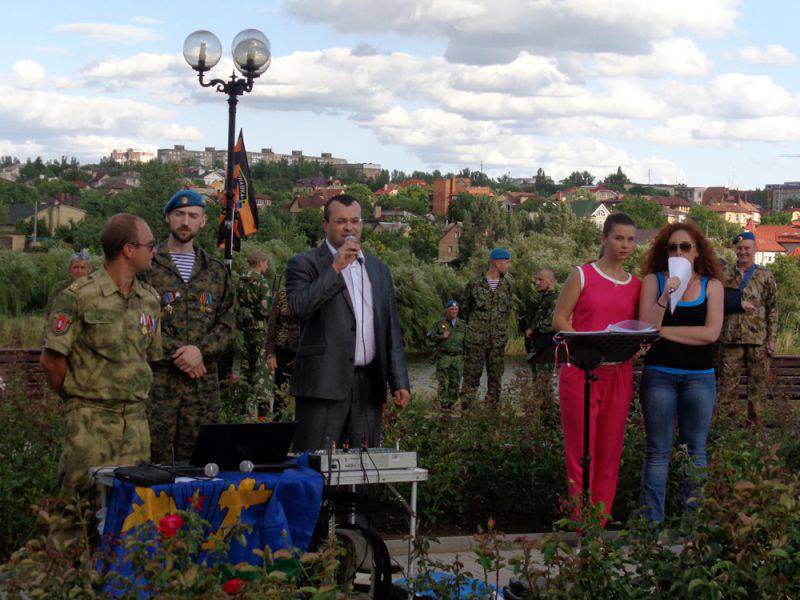 After the monument was opened, flowers were laid to it. 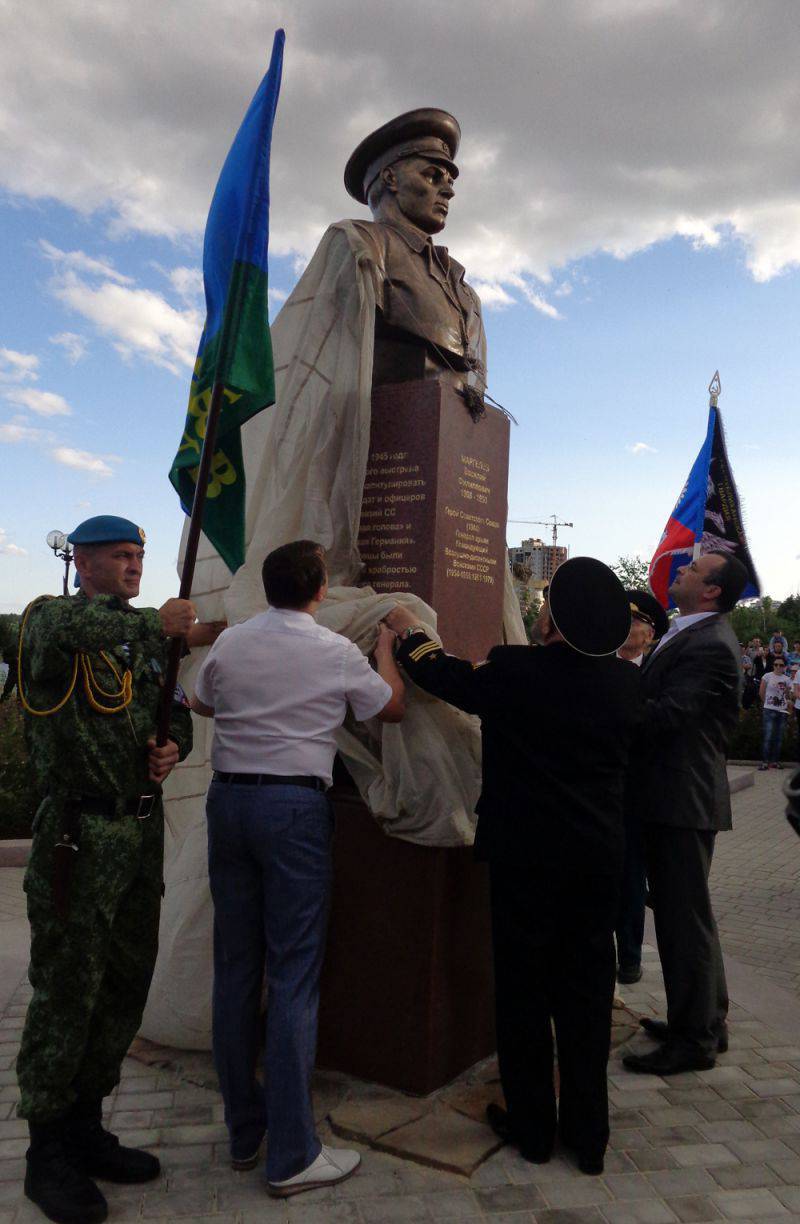 Then the concert program continued, the ceremony of awarding the militiamen and political figures of the Republic was held - they were handed souvenirs from M. Serdyukov and V. Lanovoy. The fighters demonstrated hand-to-hand combat techniques. The holiday was a success. 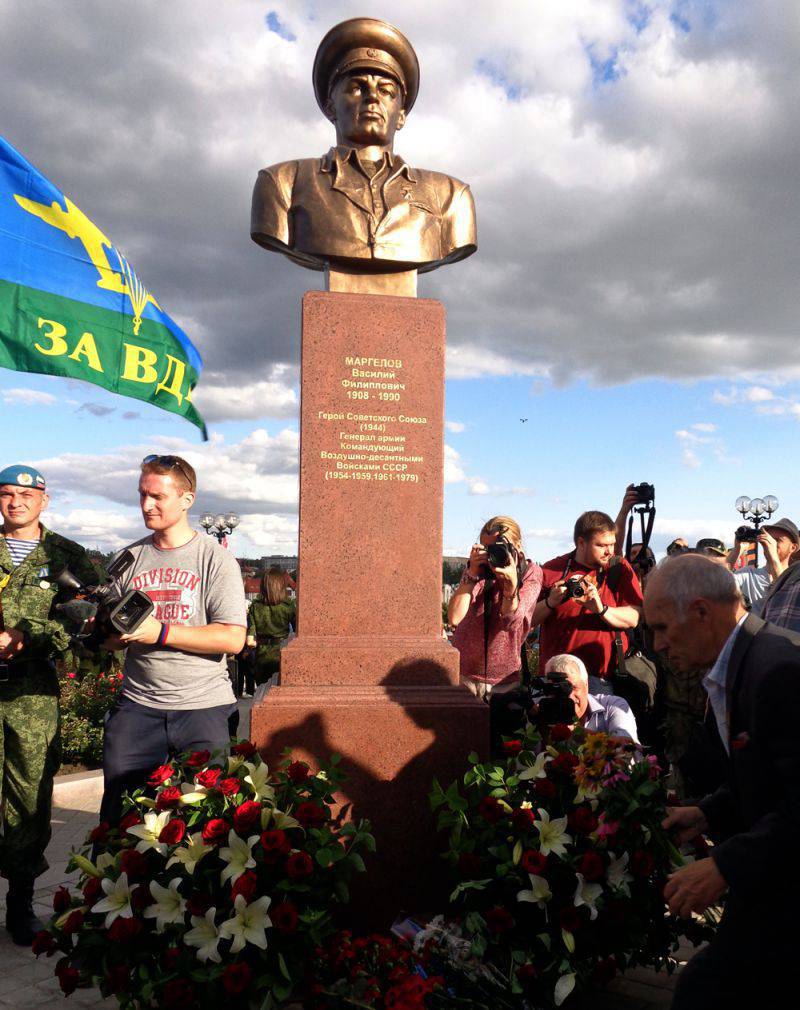 These days, Donbass celebrated another holiday - the Day of Metallurgist. The head of the DPR, Alexander Zakharchenko, addressed the metallurgy workers with these words: “Due to the inflexible character, tempered in hard work, and serving the beloved work, Donbass metallurgists have always been a vivid example of professionalism ... There is a saying: , but first you need to kindle a fire in the soul. " I can say with confidence: the metallurgists of the Donetsk People's Republic are people with a spark in their hearts, and the heat in their furnaces is always strong! ”

In various cities of the DPR, solemn events and concerts were held in connection with this day, because metallurgy means a lot stories and the economy of the region.

Here, for example, footage of the celebration of the Day of Metallurgist in Makeyevka July 17: 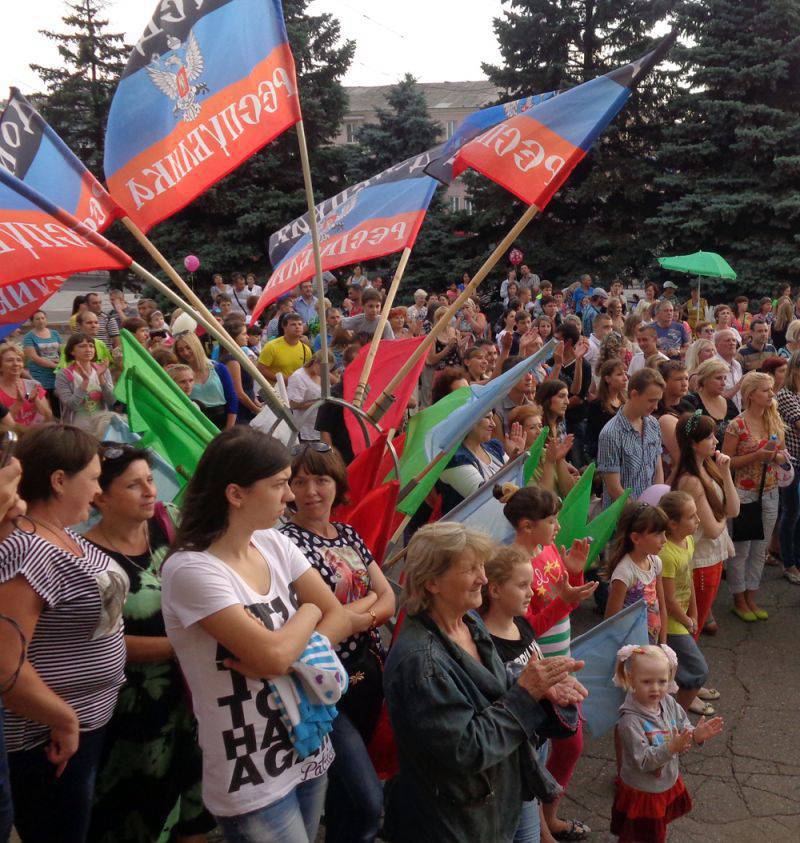 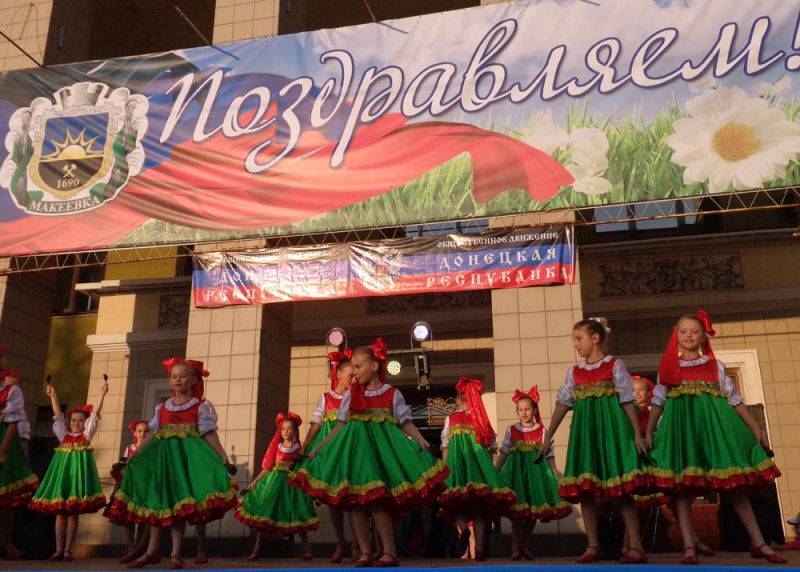 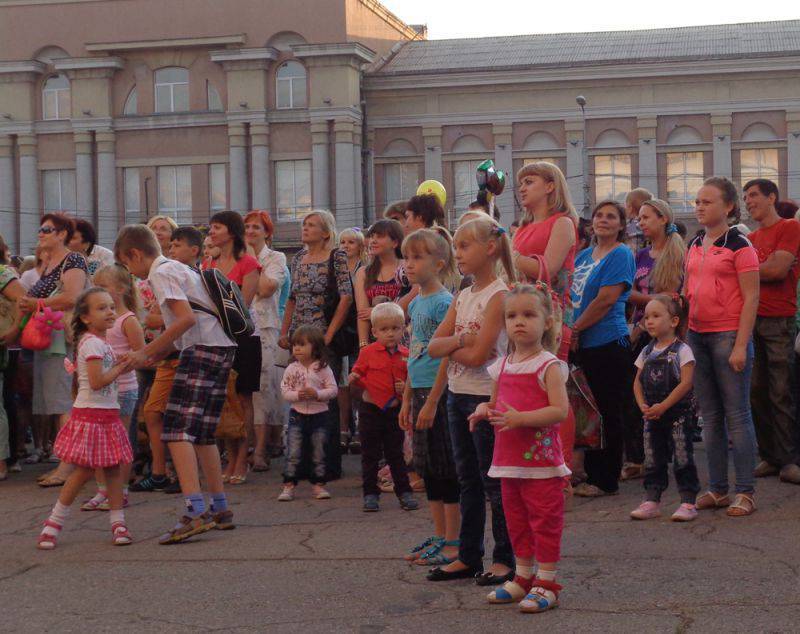 But ... "Dill" for that and "dill" to spoil any fun and any celebration. They darkened both the Metallurgist Day and the holiday in honor of the installation of the monument to VF Margelov.

The ceremony of installation of the monument had just ended, the participants did not even have time to go home - and Donetsk came under such fire that the residents forgot what the notorious Minsk agreements are. “This can be compared only with what was on the hottest days - in August last year and in January of this,” the Pitmen shared their impressions. And indeed, arrivals in the city center have not been lately, and they have already been weaned from them, when suddenly ...

There was in Donetsk a famous department store "Ukraine" - the largest in Soviet times. Now there is an Amstor supermarket. The place is quite busy. Fortunately, now the stores are closed in 19-20 hours - if the dill shell had hit the open store, the consequences would have been even more severe.

In the building of the supermarket struck the roof. 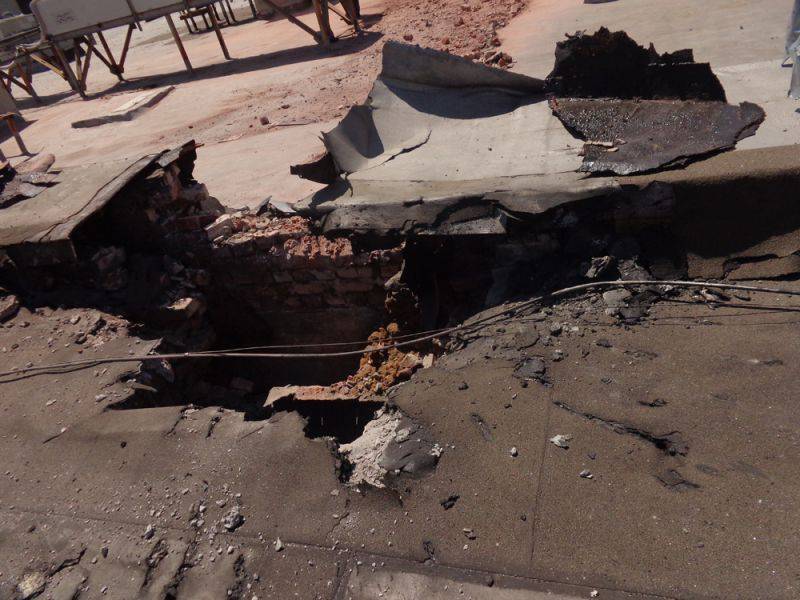 Damaged nearby kiosks and tents. From the tobacco stall remained miserable fragments. 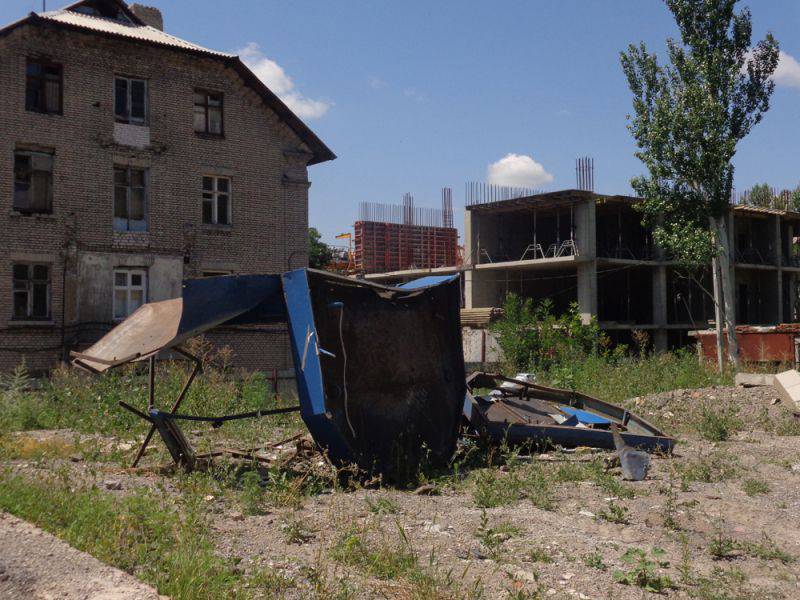 Next - the building of the Donetsk center of vocational education of construction and architecture, which also inherited from ukropovskih bounty. 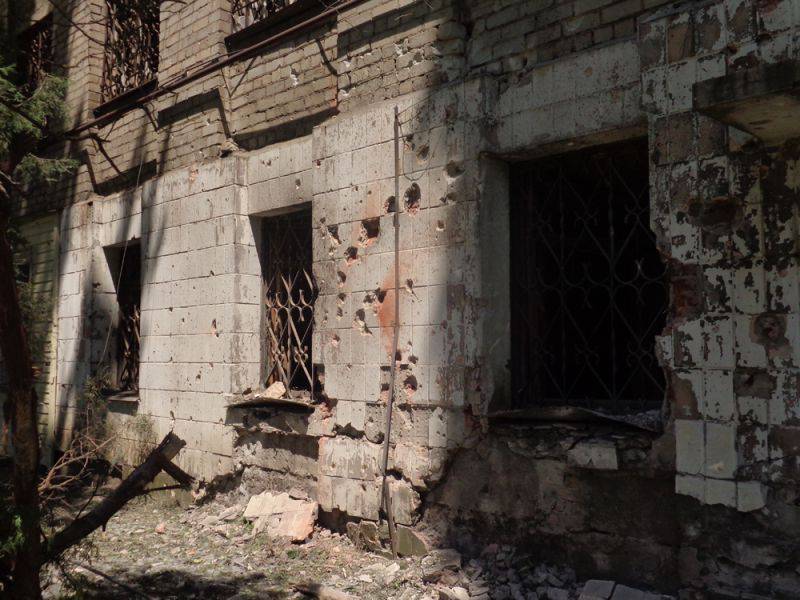 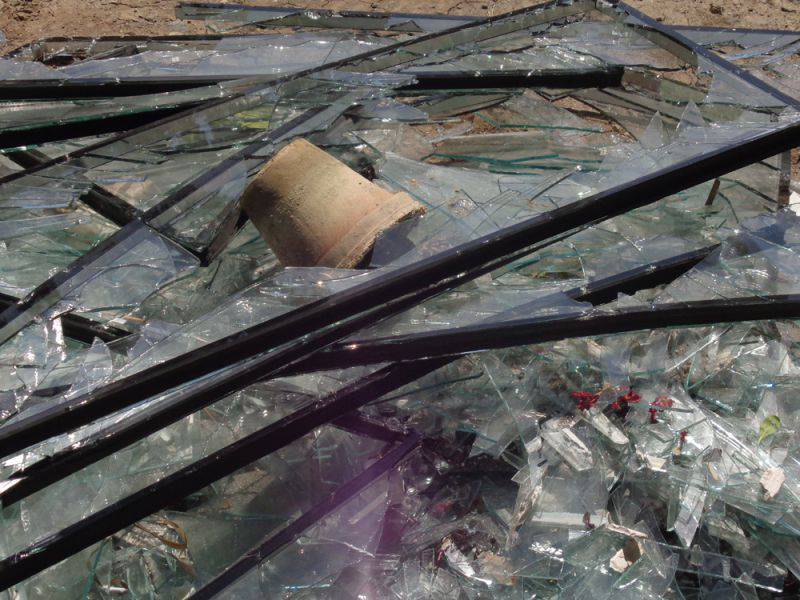 In the abandoned dash was a gatehouse. Locals say that the 30-year-old watchman died along with the dog - their burnt corpses were found the next morning. They say his name was Sasha, and he still has a child and a pregnant wife. The wooden roof of the building was completely burned out. And the next day, the remains of the roof still continued to fester. 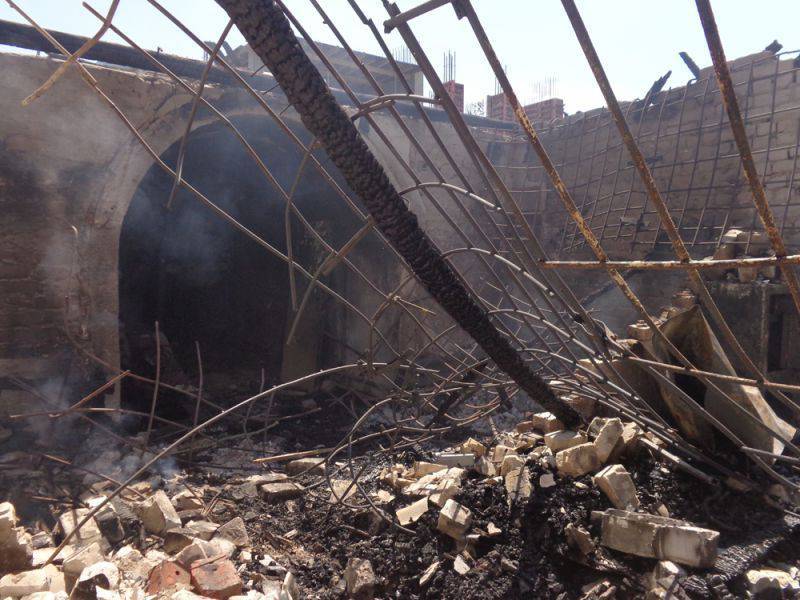 The windows in the neighboring houses flew out. 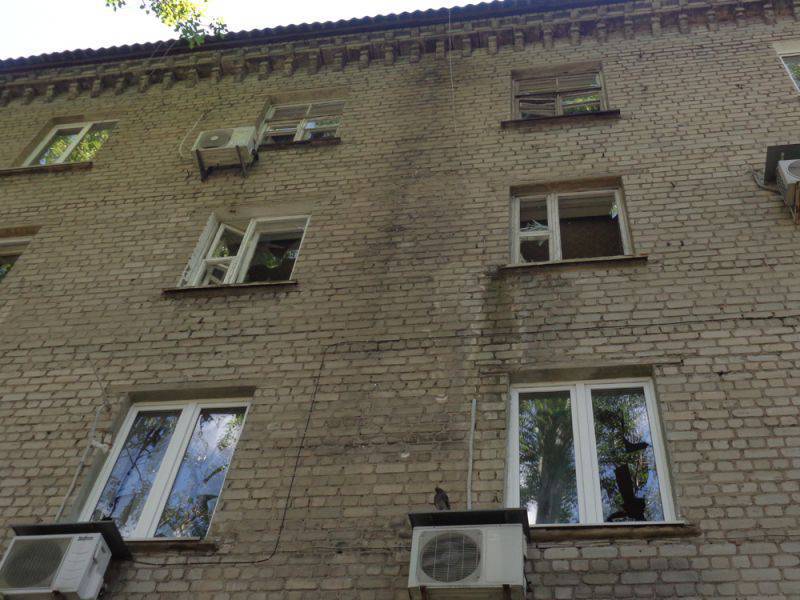 Scattered branches of crippled trees and broken glass are traces of the ukrokaratels' crime. 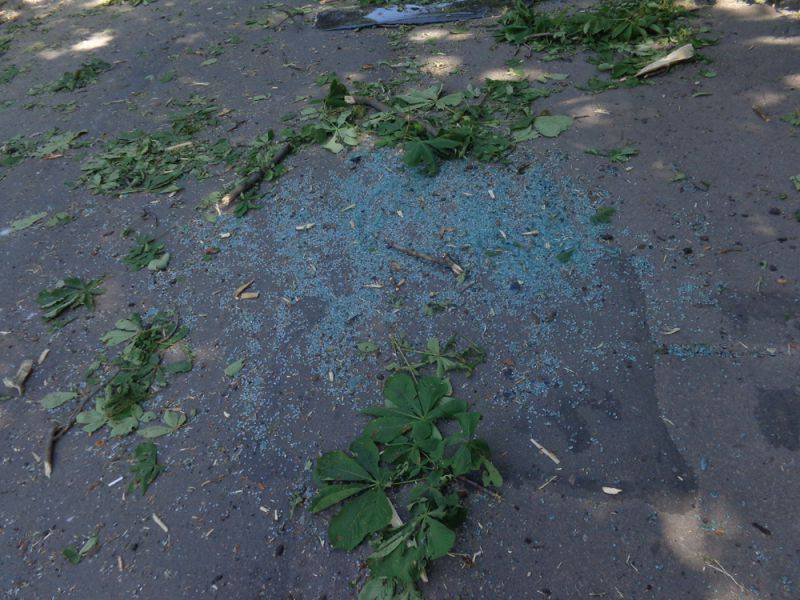 In the afternoon of July 19, the workers cleaned up the affected store. Take out the broken glass. 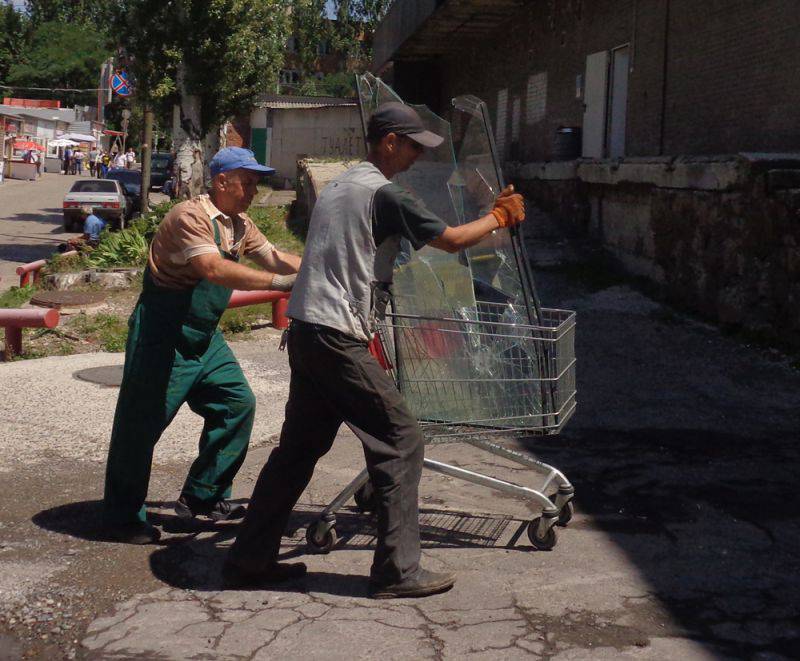 The supermarket worked, and there were a lot of people in it. Only a dangerous place — where a hole had formed in the roof — was fenced off. 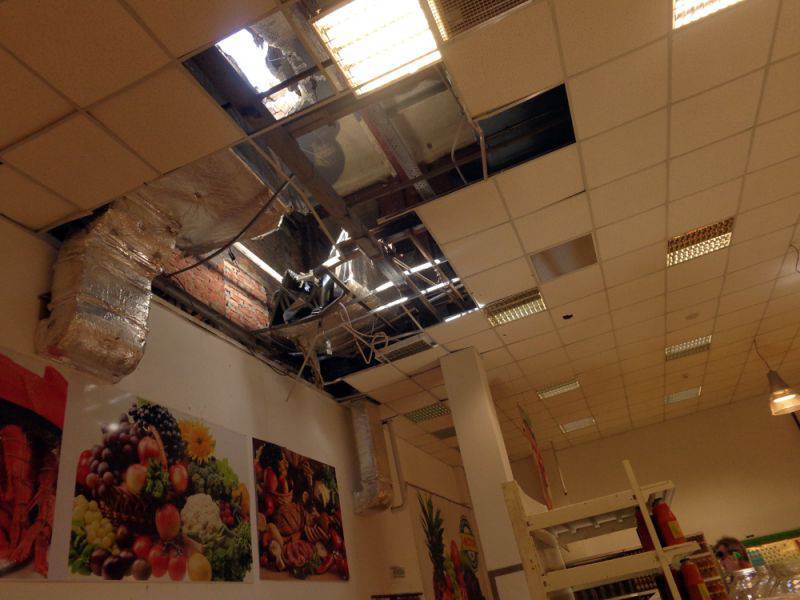 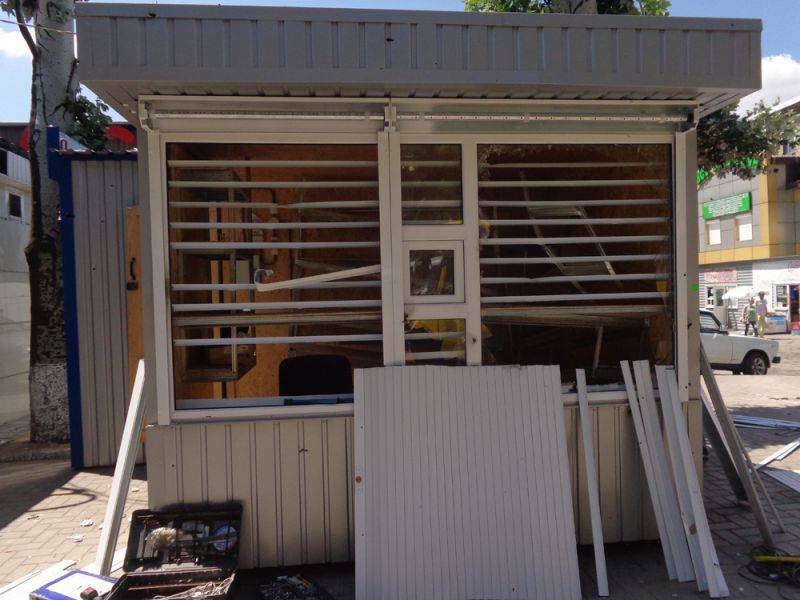 And in the next ukroSMI asserted that “Donetsk fired at itself” ...

Ctrl Enter
Noticed a mistake Highlight text and press. Ctrl + Enter
We are
Memory sake. In the Donetsk Museum of the Great Patriotic War, a diorama of the battle at Saur-Grave openedWinds over Saur-Grave
14 comments
Information
Dear reader, to leave comments on the publication, you must to register.