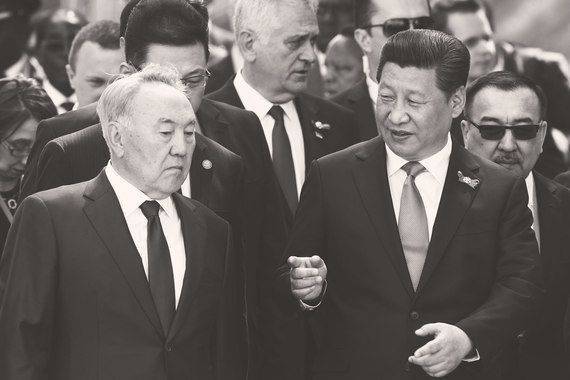 The recently concluded BRICS and SCO summits were covered in the Russian press primarily as tools for establishing a dialogue between Russia and its great neighbors in Asia - China and India. The “turn to the East” proclaimed by our authorities is perceived primarily as a change of guidelines: China and other countries of the “far Asian countries” should take the place of Europe and the US, although the potential for cooperation with them is not obvious, and the interaction experience is extremely small.

Against this background, Russia pays, albeit much, but mostly formal attention to the states, the economy and история which are similar to ours, but the progress seems to be more impressive. The most significant of these countries is Kazakhstan, a state that seems to have managed to find the best way from the republic of the former Soviet Union to an independent state with a dynamically developing economy.

Today, Kazakhstani politicians and officials often make ambitious statements about the future of their country: what are the words of President Nursultan Nazarbayev saying that Kazakhstan is in the “thirty” of the most developed countries of the world or the chairman of the national bank Kairat Kelimbetov that Kazakhstan is “new Singapore in Central Asia , the most competitive economy among the post-Soviet states ". Kazakhstan, of course, is not Singapore - but not Russia either. And therefore, Kazakhstan's experience is essentially more important for us than Singapore. Assessing it, I would point out seven main Kazakhstan lessons for Russia.

The first. Kazakhstan, like Russia, is a country with a commodity economy - and the main emphasis there was placed on the development of this country's advantage. While in Russia the years passed under the usual reasoning about the need for “tearing off the raw needle”, but at the same time the share of energy carriers in exports grew from 40,9% in 1995 to 68,7% in 2014, Kazakhstan comrades focused on the growth of production raw materials. In 2014, the country produced 2,4 times more non-ferrous metals, 3 times more gas, 3,3 times more oil, and 15 times more uranium than 1990. In Russia, the growth of oil production over these years was 3,5%, and gas decreased by 2,1%. At the same time, our neighbors realized that integration in international business chains was the key to success, and therefore much attention was paid to attracting investors from abroad. Today, private companies with international participation provide 60,2% oil production and 53,2% uranium. Accumulated foreign investment amounted to 1 in January 2015 $ 141,6 billion, or 63% of GDP recalculated at the current exchange rate (in Russia - 29% of GDP; however, investments from China to Kazakhstan are 10,5 times Chinese investments in Russia). And this course will continue - apparently, unlike us.

The second. From the very beginning of the reforms, the Kazakh authorities determined the country's development strategy in the direction of not only quantitative, but also qualitative indicators. Instead of being offended by the West, as is often done in Moscow, the authorities in Astana decided that the country should rise in global indices, improve the quality and transparency of public administration, simplify decision-making and execution mechanisms, develop the project management principle and focus on results. and not on the process. As a result, Kazakhstan in 2014 ranked 50 in the global competitiveness index (versus 61 in 2005 and 66 in 2009). The government is not focused on “disbursing funds”, but on achieving results (in 2013 – 2014, the country built 3300 km of roads and 1400 km of railways, while in Russia - 1100 and 170 km, respectively). Examples can be continued.

Third. Instead of wavering from supporting “national champions” in the field of energy to “informatization” and “innovations”, Kazakhstan relied on the only possible progressive way: first we develop the commodity sector, then we carry out modern industrialization, then think about the innovative economy. The government has set a goal for 2025 to bring the volume of investment from the current 19 to 30% of GDP, and the share of non-primary exports to 70%. The main conductor of these changes are not called state monopolies, but small and medium businesses, whose share in the economy should be at least 50%. The foundation for the creation of a modern economic base is the five-year plans for infrastructure development, which have already been mentioned above. In fact, Kazakhstan is guided by the industrialization model adopted in its time in Southeast Asia, but intends to implement it, relying mainly on local rather than imported natural resources. At the same time, the task is to attract at least 10 large multinational corporations to Kazakhstan in the next five years to increase industrial output. I note: never before did the peripheral resource economy even set such tasks.

Fourth. Kazakhstan is still not building a “knowledge economy” as it exists in the West, but the government is absolutely correct in focusing on education and science. Strategy-2050 states that the country needs the most “transfer of advanced technologies and training of specialists for their use” (and not import substitution or invention of various kinds of “bicycles”); there is a need to “ensure that the state provides young people with technical (italics are mine. - V.I.) education” (Message of the President of Kazakhstan to the people of Kazakhstan, 17.01.2014); The process of active introduction of European educational and professional standards, the replacement of obsolete building codes with the so-called Eurocodes, allowing the use of the latest building materials and technologies.

The fifth. The government of Kazakhstan has implemented, in my opinion, the principles of finance organization that are optimal for a commodity economy: if the budget is ultimately based on income from the export of primary goods, the tax pressure on the economy can be weakened. Now the profit tax in Kazakhstan is 15%, VAT - 12%, NDFL - 10%, insurance payments - 15% (in Russia these figures are higher in 1,3, 1,5, 1,3 and 2,0 times, respectively). The total tax burden in 2014 decreased to 27,6% of GDP (in Russia it increased to 36,9%). At the same time, attention to foreign investors remains extremely high: the national bank is appointed responsible for creating an international financial center in Astana, modeled on acting in Dubai - with an independent administration, judicial bodies operating on the principles of British law, with English as the main language. In the capital, they understand that attracting investors does not depend on which offices will be built in Rublyovo-Arkhangelsk, but on how their financial interests are guaranteed.

The sixth. Kazakhstan has long been following a course that Russia is not even ready to comprehend: a course of careful cooperation with a number of larger players than he himself. If since the beginning of 2000's. Moscow focused on Washington, with whom it “fought against terrorism”, then on Berlin and Paris, with which it “opposed American hegemony”, then on Beijing in its grievance towards the West, Astana built equal relations with Washington, Moscow, Brussels and Beijing. About 50% of accumulated foreign investment - from different EU countries; the US accounts for almost 20%, for China - 8%. According to the same Kelimbetov, external trade on 50% is provided by the EU and only by 20% - by Russia. Kazakhstan in 2014 chaired the SCO, and in 2010 hosted the OSCE summit. He enters the Customs Union with Russia and Belarus, but for a year now he has allowed citizens of 20 countries that are the largest investors in his economy to enter his territory without visas. Moreover, in the country they are preparing to allow foreign citizens to the civil service. This year Kazakhstan joins the WTO, next year a new Partnership and Cooperation Agreement is scheduled to be signed with the EU, which Moscow has long forgotten. In general, mild changes in emphasis in cooperation with various “centers of power” do not give rise to foreign policy tantrums that often occur in the Kremlin.

Seventh. Kazakhstan is ready to use its geopolitical capabilities effectively. It should be recalled that while in Russia there is talk of a new transit route from China to Europe through Ulyanovsk, the Central Ring Road and Belarus, Kazakhstan is building a road from Dostyk to Aktau and the Zhezkazgan-Beyneu railway line; According to the government’s plans, the capacity of the Dostyk and Altynkol stations will be almost doubled by 2020, from 22,7 million to 45 million tons, and the port of Aktau - at least 22 million tons. There is a Caspian bridge project that looks fantastic uniting the road and railway, lying on the ground, made up of oil and gas pipes. Dubai Port World, the most diversified logistics operator in the world, will operate these transportation arteries with 60 operating and 11 ports and terminals under construction in the 31 country. So Russia's dreams about the status of a bridge between Europe and Asia can remain only dreams.

Today, I repeat, it is difficult to say whether Kazakhstan will become a “new Singapore” - the economy, history and geopolitical position of the two states are too different. However, it is clear that Russia's southern neighbor is an example of a new young state that offers other countries that appeared on the world stage 20 – 30 years ago a very interesting development paradigm - development based not on rejection of the former metropolis, but on cooperation with it, on the balanced development of all sectors of the national economy, on guaranteeing their security through interested cooperation with various centers of power, finally, on integrating into the global economy and adopting it rm, and not on attempts to find "original" ways of development in conditions of artificial isolation.

Russia, in my opinion, is not paying enough attention to its developing neighbor. We are too used to “teaching the great ones” to “learn from the little ones” ourselves. However, following the results of 2015, the huge raw material Russia will give way to a small industrial Singapore in terms of its exports. What year will pass Kazakhstan? Can it not happen at all? We will not guess. -