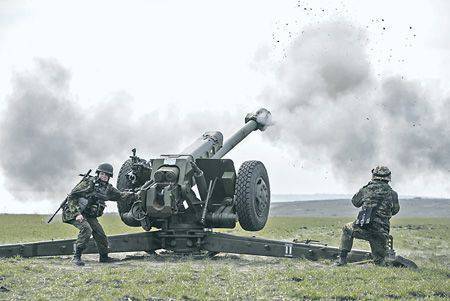 We are near Kiev in a crowd lying
Artillery beats on its own.
This is our intelligence, probably
Landmark pointed incorrectly.
Undershoot. Flight. Undershoot.
According to its artillery beats.
They would have to beat on strangers,
And they are in their own, by darling.
(Artillery song).

In the Soviet Union there were six higher command artillery schools. Three of them in Ukraine - Odessa, Sumy, Khmelnitsky. The rest in Leningrad, Kolomna and Tbilisi. Three Ukrainian military districts accounted for half of the artillery schools of the Soviet Army.

The Kiev, Odessa and Carpathian military districts have always been the ultimate dream of every Soviet officer. The service there was not only the easiest in terms of climatic conditions, but also envisaged a swift replacement of the Group of Forces to Germany, Poland, Hungary, and Czechoslovakia. I was not lucky. The Soviet government did not let me into the “Kalashny row”. Therefore, I served in the “prestigious” Trans-Baikal and Turkestan military districts as a commander of an artillery platoon and a battery with guns: 100-mm MT-12, BS-3 and 152-mm “Hyacint-B” with a range of 40 km of nuclear ammunition.

Why am I doing this? And besides, I can professionally evaluate the artillery war in Novorossia. And he reminded about the schools that it was more understandable. The best artillery officers live in Ukraine! These schools were mainly local guys. After trying to get to serve closer to home, and already retirement and in general in other places and were not going to. And now they are fighting in the Donbass. On the one and the other side. Yes, there are many young people there, but they were taught by Soviet officers. And training in the Soviet military high schools was brilliant. And in the military, the service did not seem like honey, and many were “lucky” to fight in Afghanistan.

Judging by official reports, now the war in the Donbass basically comes down to artillery duels. And here begins the most incomprehensible. Why such amateurishness? Well, just a military-sports game "Zarnitsa". On television and photographs, anti-tank guns with open and not trenched openers. Any recruit soldier knows that the first thing to do is to dig into the ground. The blessing is not the mountains, but the Don steppe. In a state of ignorance, the gun shoots where it wants, and not where it hovers. She jumps like a frog. This gun has a smooth barrel (without rifling). It is used only for direct fire shooting (I see - I shoot). The ellipse of dispersion is maximum. Any senior battery officer would have nailed the gun commanders with a stick. Because it is better without a pair of idlers than the death of the entire battery after the first volley. The answer will arrive instantly.

Illiteracy is also visible in every official and unofficial information: “artillery and rocket launchers”. Yes, it is the same thing. “Grad” is artillery, but reactive. And what's the new post - “spotter”? Remember, Poroshenko blurted out: "We caught the spotter." No in artillery units and parts of such posts. Fire from closed firing positions (when the target is not visible) is led by the battery commander. It is located with its NP in the forefront of the infantry, and the battery in 10 – 20 km from the front line. And only the battalion personally firing. You can shoot without visual contact: on the map. The coordinates of the target are known, data is being prepared (even the amendment for the rotation of the earth is taken into account) and “Battery stand! The goal of 25, infantry ... volley fire. "

Counter-battery shooting is a classic type of artillery combat. It can lead every battery commander, even young. They spotted a shot, prepared the data, and before the enemy curtailed and changed the firing position - fire. The battery of the enemy should not survive if it is discovered and did not have time to leave this OP. It is therefore surprising that every day we are hung on the ears of the Lagman, that an enemy battery is firing from one or another settlement. And where are your gunners, comrades militia?

If you don’t, then quite elderly retired artillerymen will surely respond. Just throw a cry. After all, artillery systems have not changed. These are all invincible Soviet weapons.