Who will take Ukraine, or to prepare for the escape?

July 20 2015
89
Many readers ask us to make a forecast of the development of the situation in Ukraine in the light of today's confrontation between the Kiev authorities and the Right Sector. Everyone understands that the country is "stuck." Need a "reboot" in all areas. 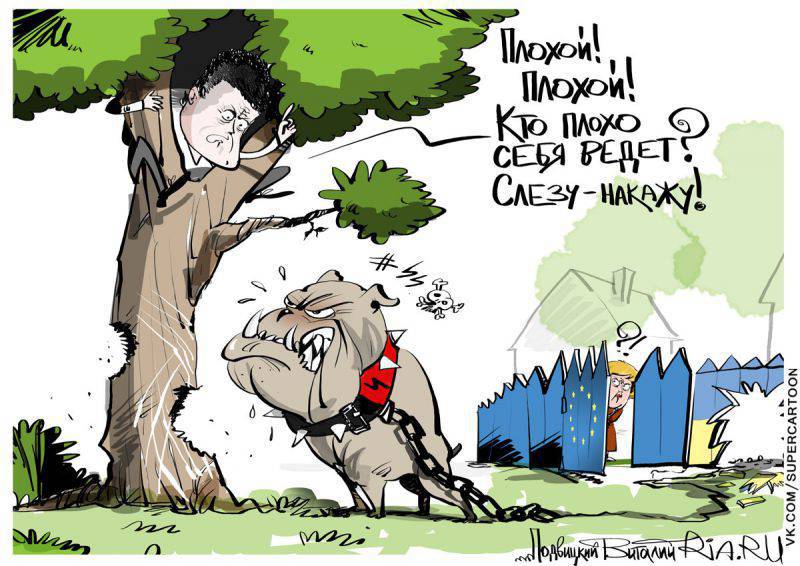 As we have already seen, forecasts for Ukraine are almost impossible. First of all, it is from the Kiev authorities. In the morning we hear some statements, in the afternoon others, in the evening - the third. And all are diametrically opposed. That is why only options are possible. The most likely and proposed for your discussion.

In a stand now, the confrontation between the fighters of the Right Sector and the authorities in Mukachevo. This is the topic of many publications and programs. Someone thinks that Mukachevo is a private initiative of local "pravosekov". Someone, on the contrary, sees a tendency in these events. Someone warns about the beginning of a full-scale civil war ...

It seems to me that in reality the "Right Sector" has moved to action. Open speech against Poroshenko. Moreover, the leadership of the organization openly warned the authorities that "their time is running out."

“If there is a new revolution, the Ukrainian president Poroshenko and his associates will not be able to escape from the country in the same way as the previous president did. They can expect nothing but the execution in some dark basement, which will be accomplished by a group of young Ukrainian military or members of the National Guard. ” This statement was not made by an ordinary member of the organization. This is the official statement of the press secretary of the "Right Sector" Skoropadsky.

In response to the direct threat of Poroshenko is still silent. As it seems to me, he is at a loss. Theoretically, it is possible by force to "calm down" the "oni-children". But only theoretically. Power structures and the Armed Forces of Ukraine more and more often declare their dissatisfaction with the authorities. While there are no obvious protests, but the mood is.

Remember the recent statement of the tank battalion 17 tank brigades. And how many such battalions? The "waves of mobilization" and the lack of real rotation led to the fact that the soldiers are "wild" from an "incomprehensible" war. Why are they here? Why all these deaths, if what was promised does not happen?

No matter how hard Ukrainian propaganda tries, those who sit in the trenches, see perfectly the attitude of the local population towards the Ukrainian Armed Forces. They are not in their territory, but in the occupied. In fact. Constant sabotage, local hatred, lack of normal supply.

And letters or calls from home. And there - frozen salaries, tariffs, pensions. And each letter - a cry for help. And the constant "people's collections of money for those killed in the ATO." The state is completely uninterested in their families.

More dangerous is the situation in the so-called volunteer battalions. According to the law, which was recently adopted by the Rada and signed by Poroshenko, the volunteers of these units seem to have “disappeared”. No such fighters. And on the "no" and ... the status of a combatant. According to the new law, a soldier must submit several documents. Including the order number of the military unit. But the volunteer battalions are not military units. They are volunteer.

But such units are now about 50. Agree, the power is serious. And if you consider that most of the fighters there are “ideological”, they are also formidable.

This is the visible part of the iceberg. But there is also an "underwater". The one that is being talked about, but which is not yet associated with the situation in Mukachevo. it weapon in the hands of the population. That weapon, which in large quantities imported from the ATO zone.

We are no longer talking about pistols and machine guns. Today, in the hands of machine guns, grenade launchers, flamethrowers ...

All these weapons will be used in the case of active force actions of Kiev. And now it is already used for propaganda purposes. Ukrainian media are enthusiastically writing about the seizure of large quantities of weapons.

Here is the alignment got Kiev today. But the question arises - why now is the "smell of burning"? Alas, the answer, as always, is "in the pocket." Economy!

The enthusiasm with which the Ukrainians recently met the formation of the next "battalion" turns its true side. Under the label of the “struggle for the unity of Ukraine”, the most influential oligarchs received armies. Let not able to independently sweep away the state, but the army. Teaming up with the nationalists, such armies will already represent real strength.

Mukachevo - only the beginning of the redistribution of spheres of influence. Three borders with EU countries - a tasty morsel for any "owner" of any territory or army. There is something to clutch in the throat of a competitor. Here I agree with the Ukrainian journalists.

However, we "lost the tourist" out of sight. I mean Yatsenyuk. His cruise in North America is somehow not particularly covered by the media. Well, rides, meets, asks for money. Nothing new. But no. New many!

Yatsenyuk openly declares that Ukraine is ready to sell everything. That is all that is interesting to Western, in particular American, investors. On funny for business conditions. In fact, it looks like this: buy from us what you want, at the price you give.

Kiev relies on the United States and Canada. Europe is no longer so interesting. But what about the local "money bags"? No way. Not effective managers. Though rich.

Russian investors (what to hide behind beautiful words, fans of “freebies”) were legally taken out of “deriban”. Ukrainian almost too. And what will be the reaction on their part?

So what is the way for Poroshenko and the company? History teaches that only one. Either Kiev will establish a dictatorship, or someone else will. Only a dictatorship will give at least some opportunity (it’s too late to talk about guarantees) to remain in power. Tough dictatorship. With all the consequences.

Western military personnel, including "instructors" from the United States, will not help in this situation. Yes, and get involved in the "quarrel" they will not. We only implement this option on our own.

But for such actions a decisive and, to some extent, brave person is needed. What about Poroshenko say the language does not turn. Again, the rotation of officials. Moskal - "to the kingdom" in Transcarpathia! Replace the leadership of the Ministry of Interior! Replace the leadership of the SBU! In the meantime, the Right Sector calmly, without any extra pump, already took control of the whole city. And not just any, but Lvov.

The version of events that is currently being played out resembles a chess zugzwang. Any subsequent move Poroshenko will only lead to a deterioration of the position. We are on the verge of interesting events. And I would very much like the Ukrainian people to really appreciate the possible consequences.