Israel - Palestine: a thousand to one 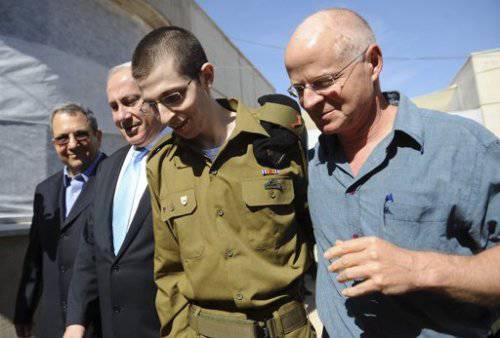 By purchasing Shalit, Israel has once again demonstrated that for him the value of the life of every citizen is not empty words. The scale of the exchange is amazing: literally one in a thousand. The epic with Shalit is one of the few stories with a happy ending for the entire period of modern Arab-Israeli relations, the outcome of which is completely satisfied by all parties.


However, in Israel there is still no universal enthusiasm about the exchange. There are disappointed. Some Israelis believe that the main problem of the exchange is not in its proportion, but in the fact that the liberated Palestinians, according to some Israelis, continue their terrorist activities against Israel. Until recently, Israeli Prime Minister Benjamin Netanyahu also held this view. However, if the exchange is completed, it means that the prime minister changed his mind or, at least, was forced to keep it with him. What considerations could Netanyahu be guided by giving the go-ahead for the exchange?

The fact is that the exchange of the corporal is perceived by the majority of Israelis as the best proof of the democratic nature of the existing government, its most noble motives in relation to its citizens. Recall that in the past few years, the liberation of Shalit has become for Israel almost a component of the national idea.

Another reason for the historic exchange with the Palestinians was an extraordinary increase in social tensions in Israeli society. Who knows, perhaps Shalit was not released from captivity and was taken as a fire extinguisher in case of the spread of the Arab revolution to Israel? The liberation of Shalit is a great opportunity to divert public attention from social problems.

The release of Shalit is a clear diplomatic success of the Israeli authorities, and the winners, as we know, are not judged. In addition, if the possibility of the release of Shalit by force would really exist, then Israeli intelligence would hardly have used it. The leaders of the Israeli special services, it seems, took into account the fact that the possibility of negotiations with Hamas may disappear altogether in the near future. The conclusion of an agreement with Hamas occurred, most likely for the following reasons.

The relatively recent operation of the Israeli Defense Army's Cast Lead demonstrated the military failure of Hamas. The defeat of the Sector challenged Israel’s ability to resolve any issues through negotiations. Therefore, the repetition of such an operation could lead Arab-Israeli relations to a final collapse.

Amid talk of recognizing Palestinian independence, Abbas’s popularity has grown to unprecedented proportions, including in Gaza, threatening to deprive Hamas of the right to vote in the very near future.

In addition, the position of Syrian President Assad, which supports Hamas, has seriously deteriorated. Damascus’s support for Hamas is weakening. The authorities of Gaza also don’t hope for Iran. Tehran, which is under pressure from a large part of the international community, probably allocates much less funds to support Hamas than before, therefore, in the near future, the movement will seek support from Qatar and Saudi Arabia, that is, those countries that can be called the most loyal to the West and Israel

And another argument in favor of the fact that Israel had to hurry with the liberation of Shalit, is that Turkey took an active position on this issue. Israeli President Peres even stated that “despite the contradictions between us, the Turkish side left them aside and preferred humanity to politics.” It is known that the Turkish special services cooperated with all parties involved in the exchange process. Why did Turkey so actively contribute to the negotiations on the exchange of Shalit for Palestinian prisoners? The reason for its active participation in the process is elementary: Turkey has long been trying to play a more serious role in the region, aging in all possible ways to influence the course of the Arab-Israeli settlement. And Ankara has achieved certain success in this: the degree of distrust between Israel and Turkey has decreased significantly.

Anyway, the main result of the exchange is the reduction of tension in the Holy Land, in the discharge of the conflict potential. Thus, all participants in the Middle East settlement process benefit from the accomplished exchange of one per thousand in varying degrees.

And once again about the scale of the exchange. One can only guess, but what if any corporal Shatrov found himself in the place of Corporal Shalit, would Russia exchange him for a thousand enemy prisoners of war?

We are in Yandex Zen
What you didn't want to know about England
24 comments
Information
Dear reader, to leave comments on the publication, you must to register.