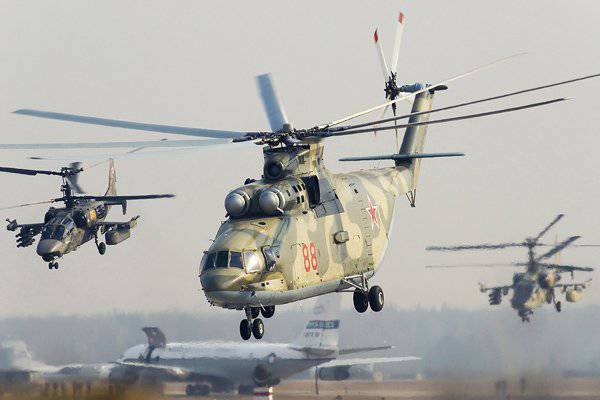 Information appeared in the press about another detail of the rearmament of the Russian army. Izvestia, citing a source in the Air Force, writes that before the 2015, the 22 of the Mi-26 helicopter should be commissioned.

Now in our Air Force 23 operated such machines and seven are under repair. For reference: fifty of such helicopters are enough to send an airborne brigade with light equipment and artillery to the rear of the enemy. However, the landings are more difficult at a greater depth - the range of the Mi-26 is less than a thousand kilometers, which, however, is compensated by a large carrying capacity.

The payload of the Mi-26 is 20 tons. Recommended load passengers - 82 soldier with equipment. But there were precedents when more people were transported. For example, on a 2002 shot down in August in the Khankala region, a 142 soldier flew a helicopter, which is almost twice the recommended amount. True, it later turned out that this overload was one of the causes of the disaster and the large number of victims.
The closest competitor on the Mi-26 in terms of carrying capacity at the moment is the American CH-53E Super Stallion helicopter manufactured by Sikorsky, capable of carrying in the cargo cabin up to 13600 kg or up to 14500 kg on the external suspension. The absence abroad of a helicopter with a loading capacity similar to that of the Mi-26 twice forced NATO countries (USA and the Netherlands) to turn to Russia for help in evacuating damaged helicopters in Afghanistan (CH-47 and AS-532, respectively).

In general, the helicopter is very good and is needed not only by our army, everyone recognizes this. Recognize and express the opinion that even fifty Mi-26s are not enough for the Armed Forces: military transport aviation must have equipment with different mobility. For example, the main aircraft of our BTA - Il-76 - with superior cargo capacity, can not be compared with the Mi-26 helicopters in mobility, which in military conditions can be very, very important.

Including from these considerations, 2015 Mi-22 will be purchased before 26. What will happen after 15 is still unknown, but it can be assumed that a new contract will be signed and purchases will continue, especially since by the year 2020 most of the 26s operated in our country will have developed their resources. So after 2015, the quantitative composition of the Mi-26 fleet will most likely change, not quantitatively. The increase in the number of helicopters is expected only after the 2020 year. In any case, given the pace of implementation of the current order, it is by this time that the “old” aircraft can be replaced.

But there is also cause for concern - these are engines. Serial Mi-26 have two engines D-136 with power 10440 hp. (8380 kW), developed by the Zaporozhye ICD Progress and manufactured at the Zaporozhye Motor Sich plant. In December, the company should start production of the D-436 engine, which is a further development of 136. However, Zaporozhye has been in the territory of a contiguous but independent state for two decades. In addition, there is an assumption that this very state can use the supply of engines for political purposes. This version is supported by the Ukrainian "experience" of participating in the "gas wars", a new round of which may soon occur. At the same time, most of the products of Motor Sich go to Russia, and it is very unprofitable for Ukraine to leave one of its largest productions without orders. What will happen in practice - we'll see. In addition, over the past few years, from time to time, information appears that Klimov OJSC is working on engines designed to save the Russian aviation industry from the need to purchase engines from foreign manufacturers. But for the full development of the domestic helicopter industry, of course, ideally, a special enterprise should be created that will deal specifically with turboshaft engines specifically for helicopters. Only this business is not tomorrow or even the day after tomorrow.

The first flight of the Mi-26 took place on December 14 1977 of the year. In addition to the military transport version of the Mi-26 can be manufactured in civilian transport or passenger versions. In the latter case, he gets a comfortable cabin on 70 passengers. The civil transport Mi-26T can carry an 7500 liter tank in the fuselage for water or fire extinguishing fluid. In addition, it is possible to transport the water tank on an external sling. There is a sanitary option with the ability to transport 60 bed patients with accompanying. Also in single copies or in a small series the following versions of the helicopter were manufactured:
- Mi-26PP - jammer (one copy);
- Mi-26С - helicopter with equipment for decontamination work. Carrying tank for decontamination fluid and its spray system. The only copy worked at the Chernobyl NPP;
- Mi-27 - air command post. It was converted two cars.

We are in Yandex Zen
Multi-purpose convertiplane Ling-Temco-Vought XC-142 (USA)
An-12 in Afghanistan
13 comments
Information
Dear reader, to leave comments on the publication, you must to register.