July 17 2015
31
The 2015-mm 2015B82 mortar mounted on the chassis of the all-terrain vehicle PM-2 24X500 was demonstrated to the first International Military-Technical Forum Army-6 held in June 4 near Moscow Kubinka. A new method of transportation was proposed by the Russian military Central Research Institute "Petrel", a member of the corporation "Uralvagonzavod." Up to this point, the 82-mm mortar 2B24 was carried only disassembled, with the distribution of the individual parts of the mortar and ammunition between the five numbers of its calculation.

The general director of the enterprise, Georgy Zakamennykh, in an interview with RIA journalistsNews»Noted that the installation of a mortar on a new chassis is able to dramatically increase the mobility of fire equipment by increasing the speed of movement across the area to 80 km / h, as well as reducing the time it takes for the mortar to be deployed at a firing position due to the transportation of the mortar already assembled. In addition, this upgrade allows you to reduce the calculation serving the mortar, to two people. Another advantage of the development presented on the basis of the ATV chassis is that the transported ammunition is increased by more than 6 times - from 6 min to 40 min.

At one time, 82-mm mortar 2B24, part of the Russian self-propelled complex 2K32 "Deva" on the MT-LB chassis, was created to arm the mountain and air assault brigades of the Russian army, as well as naval and naval airborne units. Compared with its predecessor (Mortar "Tray"), the new mortar has a circular base fire, 1,5 times greater firing range and the possibility of using more powerful ammunition.

The 82-mm mortar 2B24 based on the chassis of the all-terrain vehicle PM-500 6х4 is designed to destroy manpower (including personal protective equipment), fire weapons, and unarmored enemy vehicles located in the open or in uncovered field-type shelters, including on the reverse slopes of heights and deep ravines, in close proximity to the line of attack. Also, the mortar can be used to smoke and dazzle enemy firepower, put smoke screens on the battlefield and light up the area at night. Transporting a mortar using an all-terrain vehicle provides quick response when conducting local combat operations with the ability to quickly change the firing position and transfer the mortar crew or the battery to a new location. 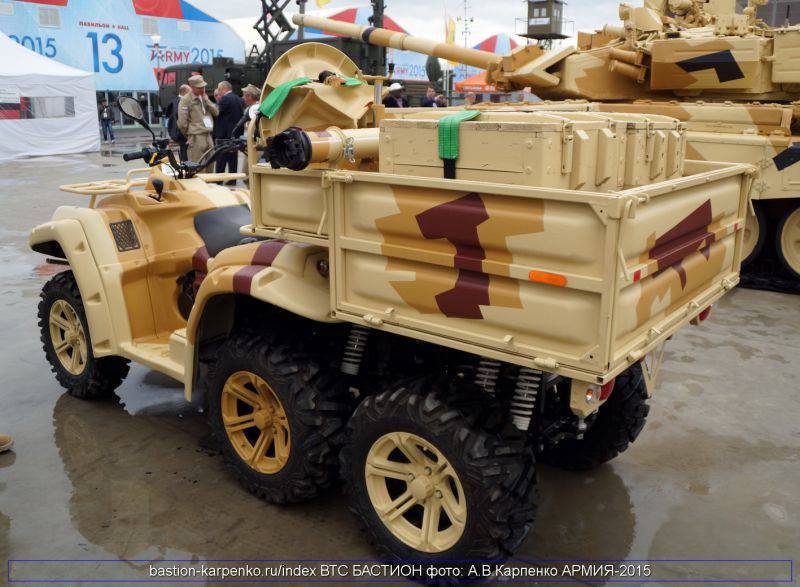 The presentation of the all-terrain vehicle RM-500 took place in the framework of the international salon "Integrated safety 2011". It is worth noting that this is the first all-terrain vehicle, which is designed and manufactured in the Russian Federation. All-terrain vehicle was obtained the necessary certificate of conformity. The border service of the Federal Security Service of Russia, the Emergencies Ministry of Russia and other buyers have become interested in supplying the PM-500 all-terrain vehicle.

The all-terrain vehicle PM-500 combines the best qualities of tourist and utilitarian models. Its elongated wheelbase provides the car with stability at high speeds, as well as safety when driving with a passenger. The presence of a 25-liter fuel tank and moderate fuel consumption provide the ATV with a cruising range of up to 200 km. Over time, a cargo version was created on the basis of the first Russian ATV, designated PM-500 4x6. This version is characterized by the presence of a spacious cargo platform with a volume of 500 liters. The cargo all-terrain vehicle allows you to carry up to 400 kg of various loads. It was this machine that was chosen to transport the 82B2 24-mm mortar. The civilian version of the six-wheeled quadrocycle can be appreciated by villagers, farmers, owners of country plots and summer cottages, as well as employees of emergency and municipal services. 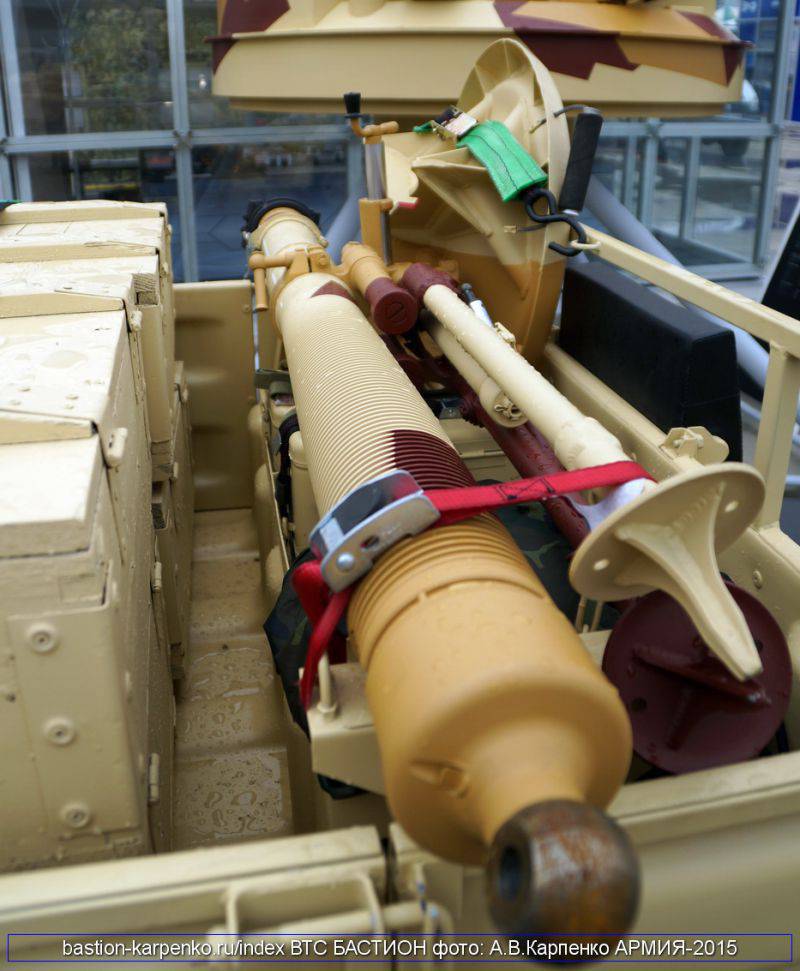 The main purpose of the mortar 2B24 you could get acquainted at the beginning of this article. Also this mortar can be used to solve the following tactical tasks:
- destruction of trenches, trenches, passages of communication, as well as light wood and earth structures of the enemy;
- making passes in wire barriers;
- fire support and maintenance of infantry units;
- target designation and adjustment with the help of smoke and lighting mines;
- smoke of command and observation posts, as well as enemy firing points, formation of a smoke screen for infantry, leading the attack on the enemy defensive lines;
- illumination of the front edge of the defense and the firing points of the enemy, his command and observation points.

In the Russian army, the following range of ammunition is used for firing 82-2 mortars: fragmentation mines 24-O-3, O-26 D, O-832 DU and Z-O-832. For the solution of individual fire and tactical tasks, special-purpose mines can be used: C-12 C lighting, D-832DU and D-832 A illuminating mines and agitation - A-832 A. At the request of the customer, in order to increase the mobility and security of the mortar and By calculating it, it can be mounted on a variety of tracked and wheeled chassis. 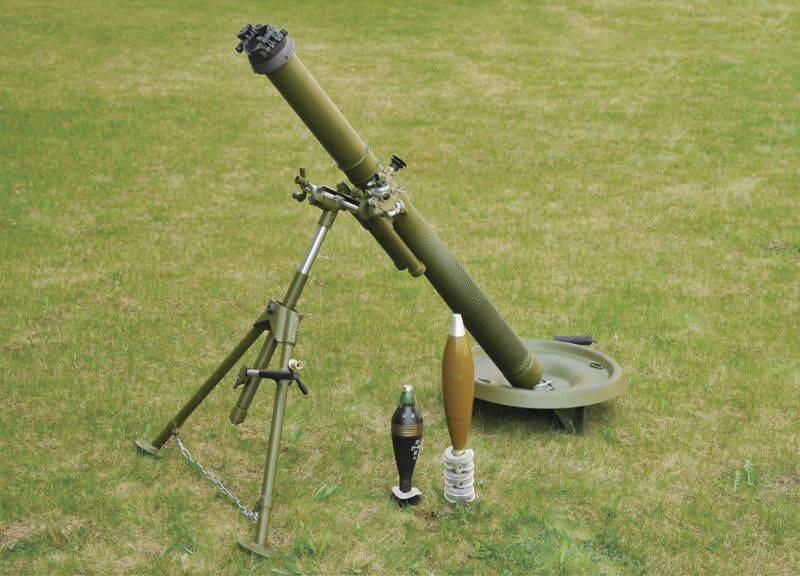 Structurally, the 82-mm mortar 2B24 is a muzzle-loading, smooth-bore system that consists of a barrel, a two-leg mast, a support plate, an aiming device and a double-locking fuse. The barrel of the 2B24 mortar is intended to form ballistic pressure in the crushing volume and give the mine a direction of movement and initial velocity. To load a mortar, mines with charges corresponding to the task are numbered by the stabilizers in the barrel with its muzzle. In the breech of the mortar there is a firing-protecting mechanism, which provides for clearing the mine capsule when it is loaded and safe discharge of the mortar in the event of a misfire. Mounted on the muzzle of the mortar barrel, the safety guard against double loading eliminates the possibility of placing another mine in the barrel of a mortar if the previous one is still in the barrel.

The two-leg carriage serves as a support for the mortar barrel in a combat position and ensures that it is given horizontal and vertical targeting angles. Sighting device is used for accurate targeting of a mortar when firing at both visible and invisible targets. The base plate transfers to the ground the force of recoil of the mortar at the moment of the shot and ensures its stable position. Transportation of the mortar is performed in standard packaging in any type of transport, or disassembled in special devices - packs - by the calculation of the person consisting of 5.

Due to the rate of increase over a 2B14-1 firing range, the use of mines increased power (3-O-26), the possibility of quick disassembly into its component parts, new 82-mm mortar 2B24 allows units to achieve a high level of agility in combat conditions, successful and timely solving combat missions set in modern conditions; 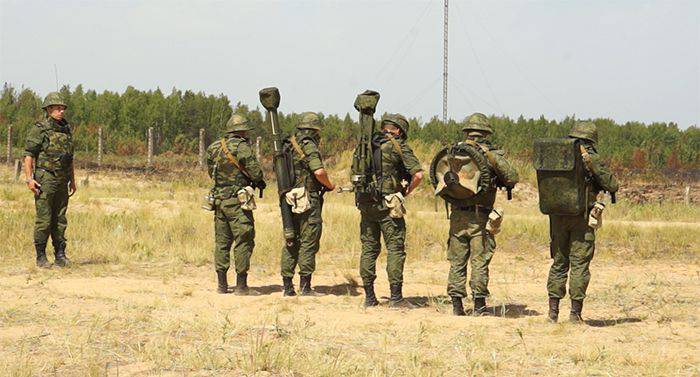 Like the other domestic mortar 2С12А, the mortar 2Б24 is equipped with a new hinge connecting the trunk with the base plate, which allows you to fire at targets in any direction, only turning the trunk and rearranging the carriage supports. The permissible rate of fire of a mortar is up to 20 rounds per minute. At the same time to ensure an acceptable temperature regime of the mortar barrel and to avoid its deformation on the breech was located finning-radiator.

Being originally worn by a mortar, it can be disassembled into three main parts, which are placed in special packs for carrying. In this case, one of the fighters of the calculation carries the trunk, the other - the support plate, the third - a two-legged carriage, and the fourth number is the calculation carried by a special backpack for ammunition. Without making any significant changes, the mortar 2B24 can be converted from portable to self-propelled. To do this, using a special mounting kit, it can be installed in the troop compartment of an armored tractor MT-LB. This complex was named 2K32 "Virgo". It is noteworthy that the 2FX510-2 mounting kit used for this allows you to easily and quickly remove the mortar from the combat vehicle and use it in a portable version.

The maximum firing range (using 3-O-26 mines) is at least 6000 m.
The minimum range of shooting - 100 m.
The maximum initial velocity of the mine is 320 m / s.
Vertical mortar pointing angles - 45-85 degrees.
Corners of horizontal guidance with permutation of two-legs - 360 degrees, without rearrangement ± 4 degrees.
Maximum rate of fire (without correction of aiming) - at least 20 shots / min.
The transfer time of the mortar from the combat position to the traveling one (and vice versa) is no more than 30 s.
Mortar mass in a combat position with a double-loading fuse and a sight - 45 kg.
Mortar calculation - 5 man.