Ukraine has invented a punitive machine


The Ukrainian technical genius revealed to the world quite a few outstanding examples of military engineering thought during the punitive operation in the Donetsk and Lugansk regions. We offer a story about the amazing armored vehicles of the security forces, created by individual craftsmen and whole groups of trucks, tractors, tanks with the help of a welding machine and a concrete mixer.

The head of the hit pair of Ukrainian battleships, without a doubt, "Tortilla", created by farmer Boris Tkach from an old crawler tractor manufactured in Kharkov and a cistern. As we remember from the “White Sun of the Desert”, metal tanks serve as good protection even against rifle bullets, not to mention modern automatic rifles.

As conceived by the inventor, the 11-ton car can transport 30 fighters, and take the return flight from the front line of the wounded. It is also possible to install weapons. In the Ukrainian television news they said that there are no analogues to Tortilla, but they were mistaken - in 1917, American Best presented a self-made tank of a much more advanced design. He even participated in the California National Guard maneuvers.

Secret weapon The Dnipro battalion, the Grand Jihad armored car, occupies the second line of our rating only by virtue of its big name - the fighting qualities of the vehicle do not stand up to scrutiny. The onboard KamAZ sheathed with roofing iron is struck from any rifle and, as a result, was captured near Ilovaisk.

Above the trucks, Ukrainian specialists mocked from the heart - in the fields of the ATO, ZIL garbage trucks with metal blinds welded to the cab, KrAZ trucks and KamAZ trucks with scrap metal armor were seen on the fields. Special mention deserves the armored car "Vatruk", repulsed by militias from the battalion "Azov". His shell is made of thousands of metal bars. The welder who built this miracle must put a monument in the center of his native village. Also of the rods, of course.

And KrAZ, reinforced with concrete patches, handed over to the 79 th airmobile brigade of the Ukrainian Armed Forces a certain inventor from Nikolaev. The author did not take into account that to protect against bullets the concrete slab should be five times thicker than steel. The idea of ​​concrete armor was proposed in the 1905 year, but was rejected because of its futility. Nevertheless, in the UK 1940 was assembled a batch of Bison ersatz armored cars with protection from concrete. They had no success.

The mobile checkpoint Mykolaevets, produced by the Nikolaev Armor Plant, resembles a Tonar trailer for selling cakes, painted in camouflage and equipped with a turret with a large-caliber machine gun. The checkpoint is made from the BRDM-2 case, which is being repaired at this plant. Machine gun from the same place.

"Mykolaevets" allows you to fully protect military personnel who are in the "hot spot", - said the acting Plant Director Alexander Shvets. "From the wind," added the sarcastic experts, since a stationary lightly armored target is a grenade launcher's dream. The “checkpoint”, by the way, also has historical the prototype is the Schumann armored carriage, which was used without much success on the fields of the First World War.

In the same Nikolaev, but already at the diesel-repair plant, a patrol armored car for Ukrainian border guards was made of an onboard UAZ. The locomotive sheeting hung on the doors, windows and even wheels is not protected from anything, but there is a certificate of quality.

In the park of the battalion "Aydar" there are two amazing cars: an old Jeep Cherokee upholstered with sheet iron and a DAF delivery truck, the windshield of which is covered with a tin sieve protecting the crew from flies.

The KrAZ “Cougar” armored car is popularly called the “trough”. The innocent Toyota Land Cruiser 79 hung a two-toned armored box, negating the good off-road qualities of the prototype. Outside the asphalt, the Cougar does not travel, any pothole or bump becomes an insurmountable problem. Small armored glasses mist chronically, because instead of an air conditioner, the designers for some reason placed a refrigerator in the armored car. Finally, the arrow placed on the roof of a large-caliber machine gun has to stand on the box to reach the weapon.

The quality of the regular APU armored vehicles is also not so hot. At the end of June, the head of the Ukrainian General Staff, Nikolai Muzhenko, in a letter to the head of the Ukroboronprom state concern Roman Romanov, said that out of 45 armored personnel carriers received by the army, 27 were out of order in the first year of operation. Of the 102 repaired infantry fighting vehicles, 14 were found to be serviceable. tanks - 24. 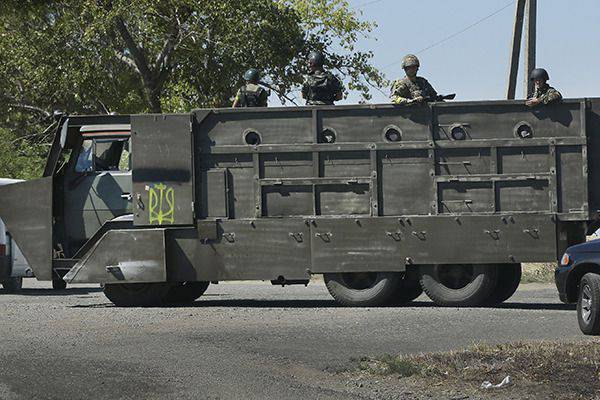