Which country will be the next victim of the West? 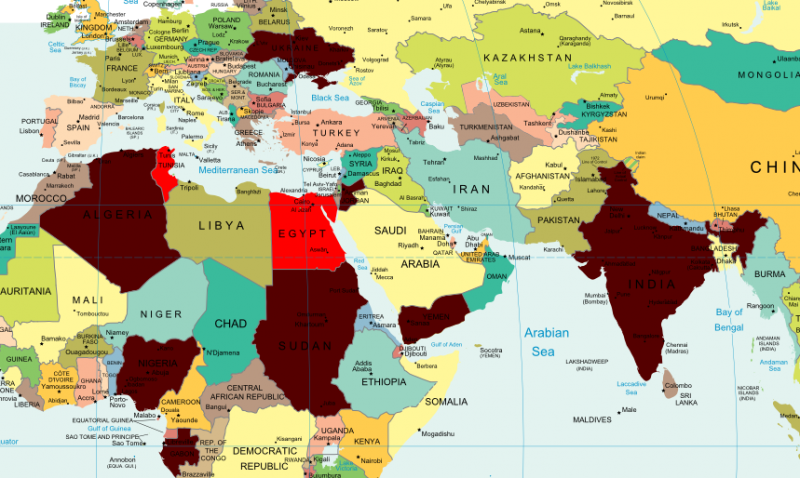 It can be said with a great degree of confidence that on the Libyan front, open confrontation along the line "Gaddafi's troops against the rebels (supported by the forces of the West and NATO allied Arab countries)" has ended. Now, local strife will take place there - between different rebel groups (Benghazi, Misurata, Islamists, etc.), Libyan tribes for a place in the sun.


The question arises, who will be the next victim of the "modernization" of the Islamic world? The most obvious candidate is the Syrian Arab Republic (SAR). Although there are other candidates for the role of the victim - Algeria, Northern Sudan, Yemen, Iran, Pakistan, etc.

It was in SAR that the unrest that began in March 2011 of the year led to hundreds of dead and wounded. Damascus in the Western media and politicians causes great irritation. The Assad regime did not make mistakes. Gaddafi rather quickly manages to crush the uprisings in the border cities in the bud, to prevent the creation of a rebellious beachhead like Benghazia in Libya, through which they will break the country.

But now, after the end of the war in Libya (growing into the stage of the internal Libyan conflict), the West and its Arab allies will be able to increase pressure on the SAR. The Syrian opposition accepted with great joy the news of the death of Muammar Gaddafi. At the anti-government protests that took place on October 21 in the cities of Hama and Homs (the most stable center of resistance to the Assad regime), opposition activists carried placards with some of the slogans: “Doctor, you are the next!” Gaddafi is ready, your turn, Bashar! ”,“ Assad, get ready! ”. Rallies were dispersed.

UN Secretary General Ban Ki-moon once again called on Syrian President Bashar al-Assad to stop violence and "massacres" in Syria. In addition, the United States recalled its ambassador Robert Ford from the SAR. The US State Department explained this decision by the ambassador’s security concerns; in recent months, several times they tried to throw tomatoes and rotten eggs on it.

Earlier, the Syrian authorities have repeatedly had questions about the activities of the American ambassador in the country. The diplomat, using his diplomatic immunity and the ability to move around Syria without restriction, visited various cities of the country that were covered by mass unrest, such as Deraa and Homs. This caused a negative reaction from Damascus, who suspected foreign diplomats in assisting the opposition and tried to impose a ban on the movement of Robert Ford to Syria without the consent of the country's leadership. These attempts did not bring results because they violated the rights of a diplomatic person.

In Yemen, the situation is also very tense, the unrest that has continued since the beginning of 2011, has already led to hundreds of casualties and outbreaks of civil war. Part of the army supported the opposition’s demands for the resignation of Yemen’s President Ali Abdullah Saleh. And the president expressed his willingness to resign only in case of peace in the country, the cessation of opposition speeches.

October 21 The UN Security Council adopted a resolution calling on the Yemeni president to resign. For the "Yemeni" resolution unanimously voted all 15 member countries of the UN Security Council. According to Vitaly Churkin, Russia's permanent representative to the UN, the resolution on Yemen is “balanced, non-confrontational towards all Yemeni parties.” Opposing parties should stop the violence as quickly as possible and reach an agreement based on the initiative of the Gulf Cooperation Council (GCC) initiative.

According to the GCC plan, a peaceful transfer of power should take place after the elimination of all contradictions. This agreement gives the President of Yemen and his associates immunity from legal prosecution after the resignation.

October 24, according to Reuters, Saleh agreed to give power under the terms of the UN Security Council. He announced his readiness to sit down at the negotiating table with representatives of the Yemeni opposition and sign the plan of the Cooperation Council for the Arab States of the Gulf states as soon as possible and hold early elections in the country.

If Saleh once again at the last moment refuses the agreement, then this reason can be used for external intervention.

After the division of the united Sudan into two states of the world did not come. Khartoum was deprived of oil-bearing areas. The issue of the disputed oil province of Abyei has not been resolved. The army of Northern Sudan with the battle captured the area. Omar Hassan al-Bashir's regime is an almost ideal target for external intervention. And in full compliance with international law.

Back in early July, 2011 passed and immediately faded information that the army of Northern Sudan occupied the Libyan oasis of Kufra, and also established control over the city of Al-Jawf and the highway to the center of the Sarir and Misla oil fields. Meanwhile, the oasis of Kufra and El Jauf are located a few hundred kilometers from the Sudanese-Libyan border. Neither the Western world nor the UN Security Council responded to this absolutely obvious act of external aggression.

It is clear that without the tacit permission of the West, which was conducting a military campaign in Libya at that time, Khartoum would not have taken it on itself. Apparently, al-Bashir received the consent of the key players in this region.

Thus, at any moment the world community can “detect” the fact of the occupation of Libyan territory by Northern Sudan and call Khartoum to account. In addition, the press has repeatedly passed reports of the facts of the genocide in Darfur, which can also be used to justify the “bloodiness” of the regime of Omar al-Bashir. One should not forget the fact that an international order is already hanging on al-Bashir. 21 July 2008 of the International Criminal Court in The Hague issued a warrant for the arrest of the president of the then united Sudan on charges of genocide in connection with the conflict in Darfur (the so-called three western regions of the country, where there were clashes of Arabs and the Negroid population). It is alleged that ethnic cleansing and genocide of the population were carried out in Darfur. Thus, Omar al-Bashir became the first acting head of the country, against which the international justice authority filed an accusation.

The West always does only what is profitable for it. Today, the Western world has closed its eyes to the fact of aggression and occupation, and tomorrow it may forget about tacit agreements with Khartoum and strike at North Sudan.

This country is also suitable for the role of the victim, especially in the light of the actions of the Algerian authorities during the Libyan war. Algeria took the position of friendly neutrality to the Gaddafi regime during this war.

This has already caused a lot of irritated feedback from the PNS. And here is a new message on this topic: the Algerian authorities made a statement that they did not intend to extradite members of the family of Libyan leader Muammar Gaddafi to the new authorities of Libya. Algeria will also not discuss the problem of the relatives of the former head of Libya with anyone other than the United Nations.

The authorities of Algeria reported that the relatives of M. Gaddafi were taken in the state for reasons of humanity and the situation around them has not changed. The brutal murder of Gaddafi only convinces Algeria even more that Gaddafi’s family, and his wife, daughter with her newborn child and the sons Ganibal and Mohammed, were taken refuge in the country, should be protected by the Algerian authorities.

Previously, the rebels have repeatedly demanded the release of relatives of Gaddafi, who live in Algeria from August 29 on August 2011.

Apparently, the information that was sounded back in 2007 year, the former Supreme Commander of the armed forces of the North Atlantic Alliance in Europe, American General Wesley Clark, was true. He told Voice of America that over the next five years we will dismantle seven countries. We start with Iraq. Then we have plans for Syria and Lebanon, Libya, Somalia, Sudan. And we are finishing in Iran. ”

As a result, Iraq is de facto divided into Sunni, Shiite and Kurdish lands, Sudan has already been divided into two parts, in Somalia several state formations, Libya plunged into a confrontation between tribes and various groups. They are setting the stage for a strike on Syria and Iran.

We are in Yandex Zen
Judgment in Tripoli. Saif al-Islam Gaddafi sentenced to death
The armed forces of Syria on the eve and during the uprising in the republic (2011 — 2013)
68 comments
Information
Dear reader, to leave comments on the publication, you must to register.