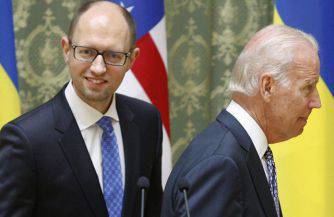 The revelations of US Vice President Joseph Biden about Bedlam in Ruin make one recall a question from the old Soviet anecdote “If Murgu was written by Turgenev, then why did the monument to Gogol be erected”?

If in Vietnamese captivity of Senator McCain was beaten on the head with a bamboo stick, then why are there problems with the head of Vice President Biden?
Or did he decide to take advantage of the pregnancy of our national pet Jennifer Psaki and instead of her how to make the public laugh?

So you imagine the “export” of corruption to the gullible, simple-hearted Ruins, who have not encountered this disgusting phenomenon since the time of digging the Black Sea. That is why envious Muscovites collect corruption throughout Russia and are trying to sell it to svidomits.

No less interesting is the process of “exporting” into the ruins of the oligarchs. It goes without saying that, for example, Benya Kolomoisky could only be “exported” from Russia. As well as Petro Poroshenko.

Indeed, in the Ruin, such characters do not grow, the air of freedom prevents it.

This reception was not invented yesterday. Once the evil villagers neighbors who celebrated housewarming, unnoticeably tried to throw up bugs and cockroaches to foul. Now, instead of bedbugs, the Kremlin throws up the oligarchs who are enjoying the post-happiness, oligarchs. How nontolerant it is, because on Benin and Petin the ancient insects look like cute creatures, just inches and snow white!

The bugs even drink blood, but to an incomparably lesser degree compared with the current Ruinist authorities and olgarhs.

At the same time, Biden explained that the Mukachevo fights of svidomit are also the result of Russian intrigues.

True, the psyche of the American vice-president could have been adversely affected by the recent close contact with the Ruinsky Prime Minister Arseniy Yatsenyuk, in the vernacular Senya-Rabbit, who came to America to perform the aria “Give money, give.”

And conversations with Arseny Petrovich are not in vain for the brain, this is a very specific personality. In the United States, he took part in the first US-Ukraine Investment Forum.
“A lot has been done. Energy, the agricultural sector and, most importantly, energy independence from Russia, ”said Yatsenyuk.

Is it non-volatile from Russia in the States? One can laugh at such a statement, but only living not in the Ruin. Its inhabitants are hardly funny.

He took Yatsenyuk, and commented on the firing in Mukachevo: “This is not about the“ Right Sector ”. The point is corruption, smuggling and the presence of weapons on the streets. ” He noted that local security forces "supported the smugglers, so everyone will be brought to justice for the crimes he committed." This is pure science fiction. Yes, if every Ruinsky security official who supports smugglers or other criminal characters is brought to justice, the local Interior Ministry will simply cease to exist, starting with Minister Avakov.

Of course, it’s impossible to doubt that the ruin security officials supported the smugglers, as well as the fact that no one of the ruin’s state-run women is going to stop the smuggling. We are talking exclusively about who will derive income from this. Nevertheless, the philosophical attitude, as it were, of the prime minister to the finally out-of-sight thinkers of the Right Sector just touches.
Well, they were shooting pravoseki with security officials, well, they took the child as a hostage, this is so nonsense, it’s everyday life. So says the Prime Ruins ...