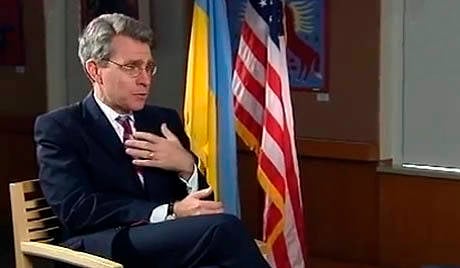 After the shooting incident in Mukachevo, a new political situation began to emerge in Banderia: among nationalists there is a split in the assessment of the armed raid of the Right Sector Transcarpathian battalion on the office of a local businessman and people's deputy Mikhail Lanyo. The head of Pravosekov Dmitry Yarosh immediately raised the stakes and transferred the confrontation to the highest level, demanding the resignation of Interior Minister Arsen Avakov, that is, he used this raid for a political attack on President Poroshenko. As a result, the Mukachevo incident turned into an all-Bandera problem: the confrontation between the Right Sector and presidential power began.

That's interesting: Yarosh himself thought of this before, or who prompted him? In connection with this development of events, the silence of US ambassador Jeffrey Payette, who previously in crisis situations always gave an assessment of what is happening, and everyone understood it as an order for execution, becomes crucial. Now he is silent, and therefore, the strife in the Bandera political is growing. For the first time, Bandera got a real Square - and this is the result!

At the same time, all Nazi-Bandera militants and radicals are aware of what is happening, and they are afraid not to shoot at each other, to the delight of the Donbas and Moscow.

Dmytro Yarosh Poroshenko reassures that his activists are holding only “peaceful political actions” in the country. But Poroshenko and his entourage understand that these are peaceful actions of militias of a paramilitary force that has units with combat experience that do not obey the supreme commander. Why do they behave so defiantly? Let's call this terrible secret that everyone suddenly forgotten: the neo-Nazi Right Sector was armed with the vanguard of the coup d'état, which Poroshenko gave power, and the right-handed consider it their debtor ...

The Nazis of all kinds and caliber really want to agree, but will they be able to? There are two contradictions that are apparently irreconcilable, about which Bandera Nazism will split. And this is not an assessment of Mukachevo raid.

The main contradiction is the attitude towards Minsk-2. The “Right Sector” demands from the president that the Minsk peace accords should be broken and that the war in the Donbas should resume. Poroshenko, under the formal pressure of Europe and Washington, also formally declares that Kiev has fulfilled all the provisions of Minsk.

The second contradiction is personal and emotional: the hostility of Yarosh and Avakov, mixed with the blood of the most frostbitten Nazi-thriller and friend of Yarosh Sasha Muzychko killed by Avakov. This is already old история reminds that the blood between the Nazis of various kinds in fact has already been shed long before Mukachevo. Avakov, by the way, makes conciliatory steps towards Yarosh, says something about his fair fight, but they are not accepted, Yarosh’s position is not softened.

Nikolay Malomuzh, the former head of intelligence of Ukraine and close to Poroshenko, in an interview with the media made it clear that the president and his entourage are afraid of an armed insurgency from the Right Sector, since he has serious political support. Apparently, from the structures of Kolomoisky, and not only ...

Indeed, pravoseki really take control of "by peaceful means" not only streets and squares, but individual regions and cities. Lions have allegedly taken "under protection." The conflict in Mukachevo is from the same series, only in a “peaceful” way with weapons in the hands of pravoseks in Transcarpathia did not work, they ran into an armed rebuff of the police.

Gradually, the case in Bandera goes to the classical dual power, because Poroshenko does not oppose the creeping seizure of right-wing power in local places, streets and squares in the capital. His positions are deteriorating and will deteriorate further, because time does not work for presidential power. Rada has already split, and paralyzed the executive branch by creating a commission to investigate events in Mukachevo. The president cannot now make decisions on the Mukachevo case until this parliamentary commission completes its work. And it is not known what conclusions she will draw.

That is the result of Payette silence today. In fact, he plays on the side of Yarosh, which confirms the old suspicions: Yarosh is just a tool of US intelligence in Ukraine, as evidenced by the whole history of the creation of the Right Sector, and his long-standing friendship with Nalyvaychenko, the former head of the SBU-CIA. Therefore, Yarosh is so confidently attacking Poroshenko: Washington really “wrote off” him, that is, allowed him to be removed. What could be the scenario of the American ambassador and his leaders from the State Department?

If Poroshenko will be stubborn, reject such a “peace plan” of resolving the conflict with the “Right Sector”, they can be blackmailed by armed insurrection. In general, this is a common US tactic in color revolutions according to the theory of "controlled chaos." To demand from heads of state “right decisions”, threatening with military force and applying it, as it happened in Yugoslavia with Milosevic. According to the same scheme, they even cracked down on Yanukovych, demanding concessions to the coup and blackmailing them with sanctions.

This is a tactic of strangling a political leader who has suddenly become objectionable by worsening his positions with each passing day. In a month, Poroshenko’s “peaceful protest actions” can be taken barehanded. If not earlier ... After all, a sudden default of the Bandera regime is possible ...