July 16 2015
20
Yakov Petrovich Baklanov (1809 – 1873), undoubtedly, is one of the most prominent warriors of the Don, combining unparalleled personal courage, strength and skill of a fighter with military leadership talent. He fought since childhood (for twelve years he was sent as a father-officer to the army), all his life. The sword of Baklanov, whom the Turks called Batman-Klych (“The Pood Sword”), knew the Caucasus, the Ottomans and the Poles. It was an iron man, moreover, honest and generous (being put to pacify the Polish rebellion, he refused to carry out the order of “Muravyov-hangers” about the deprivation of property of the rebels' children). 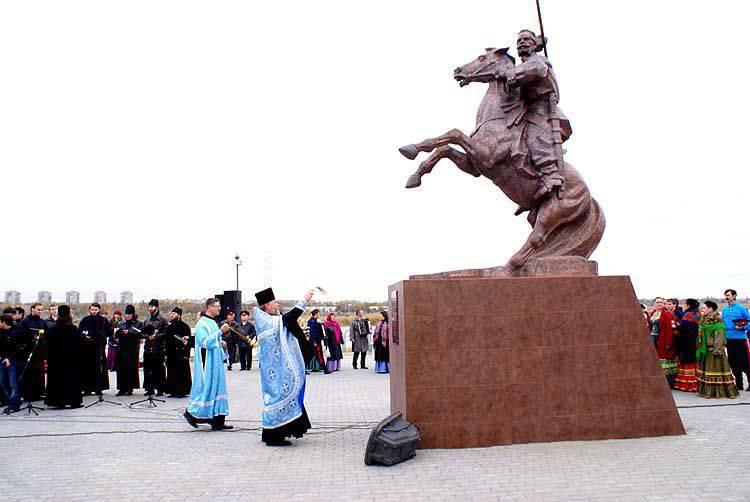 Procession around the monument to General Balkanov in Volgodonsk

Yakov Petrovich was a deeply religious man. On the famous black badge of Baklanov is a white inscription: “I look for the resurrection of the dead and the life of the next century. Amen ", silver Adam's head and bones. This prapor with an Orthodox inscription and symbolism was donated by unknown or unknown persons (it is believed that it was sewed in the Starocherkassk monastery). There are words in which Baklanov concluded his personal strategy: "Belief in God, secrecy of movement, quickness, then a bold blow to the first heart impulse." God is in the first place in this stratagem. And not only the Cormorant was famous for his blow, but the fact that all his life he did not spare himself or his property for his comrades and subordinates: he bought uniforms for his Cossacks and weaponHe shared with them bread, heat, cold and the danger of service. Baklanov’s boldness, which even experienced fighters could not understand, considering the bogatyr Donetsa to be a conspirator, flowed from the same source. It was based on the simplicity and tranquility of a man who put his hopes on God, because it was impossible to survive with his own, even “Baklan”, forces in that perennial meat grinder of battles, skirmishes, shootouts and ambushes. Baklanov was not bewitched: he repeatedly received gunshot wounds and cold weapons, concussions; it happened to him and lie dying with a bullet in his chest ... The whole secret of it lay in the fact that, even wounded, he did not get out of the battle until its completion, did not show his pain. But God saved his servant on the ways of the war: Yakov Petrovich died by his death in St. Petersburg at the sixty-fourth year of his life. The man is poor, he was buried at the expense of the Don Cossacks. A modest monument was erected over the grave of the hero by the grateful countrymen ... Eternal memory to him! 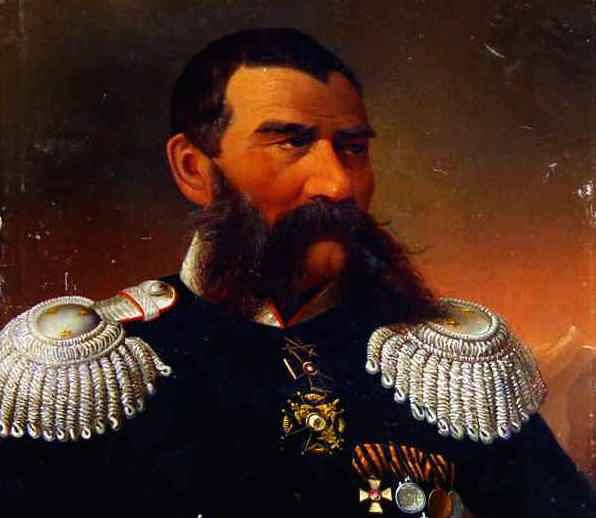 This история occurred in the Caucasus. By that time, the cormorants had already become very well known - they were afraid and called “Dajal”, as if the "Antichrist" in Muslim. (To be fair, I must clarify that the well-known words of Imam Shamil: “If you were so afraid of Allah, like Baklanov, you would have become holy!” - it was not his murids who were addressed by the boundless patriots of the Fatherland, but simple aul mountaineers. Murids should they were afraid of the “conspiracy” Baklanov, then they feared Allah more and put their man’s honor higher. I think that any of them would personally be cut with Baklanov if there was a need. Another question is that not every one of them could come out of such a Sich alive. was their Muridian life. - note. m.) 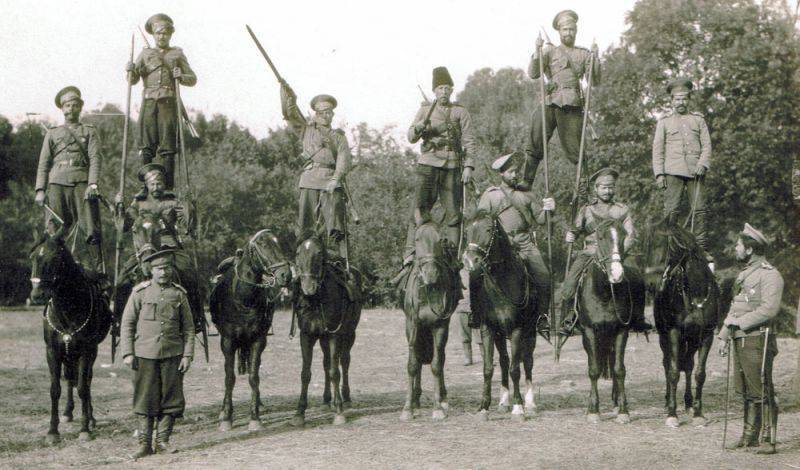 A mountain scout came to Baklanov (there were a lot of such people "at the lure" of the Russians at that time) and said that the shooter had come from the mountains to the village, who had sworn to Shamil on the Koran to kill Baklanov. “Who is that?” - “Tavlynets, the name Janem. He told the old men that he missed only once in his life. The old men said: Baklu did not miss once. He does not take a bullet or checker. Janem said: I fall fifty steps into a chicken egg. The old men said: Bucklu will fall into a fly fifty paces away. Janem cast silver bullets for you. Tomorrow he will wait in ambush when you go, as always, to watch the troops. Don't go and watch the troops tomorrow! ”The cormorants paid the scout and let him go. 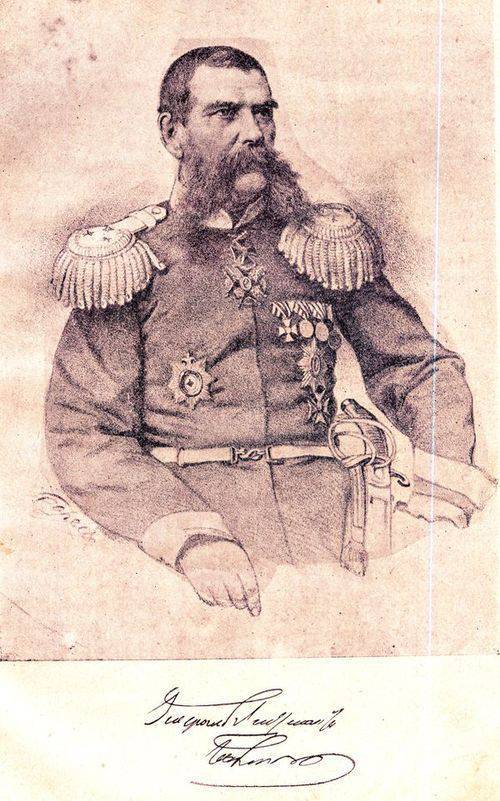 In old age, in his brief memoirs with the simple name “My Combat Life”, the Cormorants confessed that they had spent a very nasty night. But to show the Highlanders, who knew that he was going out the same way every day, he could not be cowardly. Slava Baklanova was Russia's powerful weapon in the Caucasus; he had no right to blunt these weapons, although the choice, of course, remained with him. And Cormorants, having charged their best choke, early in the morning, as always, mounted the horse. This way he will later call the road to the frontal place, that is, to Calvary. (Such a comparison may seem immodest to the modern reader. However, Jacob Baklanov was a simple person; he learned to read from the ecclesiastical deacon, and church books were probably the “defining” books in his life. Where else would he have to make comparisons? sacrifice for our neighbors. Forgive this metaphor for him. - author's note.) He knew that Janem was waiting for him somewhere on the old battery - a good sniper position. Everything happened before the eyes of the Russian troops and the mountaineers, who had gathered to look at an unprecedented duel. 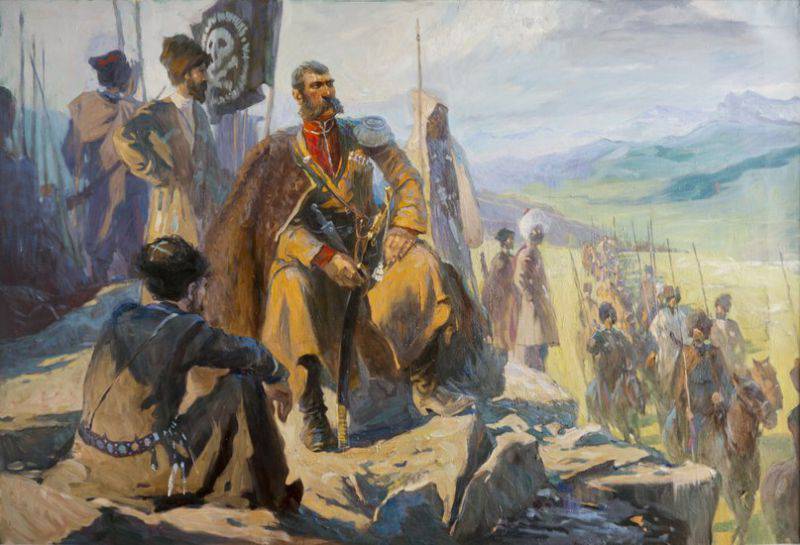 Cormorants drove up to the hill where the battery used to stand, and stood in front of it motionless, like a rock. (In fact, he simply did not know where Jane was hiding, and he wanted to call him to a shot to find out. There were no other chances.) The shooter rose from the grass and raised his gun. Either the immobile heroic figure of Baclu is on horseback, or the stories of superstitious old men affected Janemu’s nerves: he missed the second time in his life. Everything happened so quickly that Baklanov managed only to notice the rising silhouette and the flash. Janie sank to the ground, out of sight. Baklanov continued to stand still. He saw the hand of an arrow rising above the grass, hammering a new charge into the barrel. Here Janem climbed a second time. The second bullet penetrated Baklanov's short coat: the hands of the mountain sniper were already walking. Baklanov continued to stand. When Dzhanem, who was driven out of himself, reloaded and jumped a third time, Baklanov, as he recalls, threw his leg over the saddle, put his elbow on his knee and put him to death with one shot ahead of the mountaineer. They say that Caucasians-Moslems, who saw this, shouted: “Younger, Baklu!”. The winner approached the defeated enemy and examined the body of Janem. The shooter regretted spending money on silver and cast copper bullets: they were also believed to have power against Satan. But they did not save Janema. Cormorants modestly remarks in his memoirs that it was the bullets that could spoil the result of the shot - light copper in rarefied mountain air does not give such an accuracy of impact as lead.

So Jan was killed and conquered the Cormorants. He has a long life: he will raise children, become a general, will win and win, not sparing himself. It will still strike many, but it will save someone ... But he will not have to perform a greater feat as a fighter.