Women are heroes of the Great Patriotic War 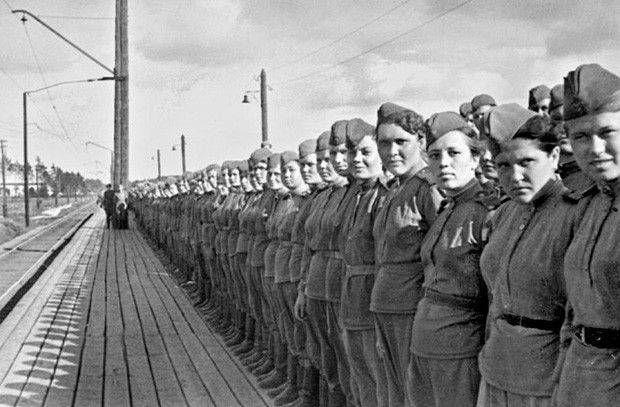 In four military years, nine dozen women have been awarded the highest award of the country who defended their motherland with weapons in hand
Women are heroes of the Great Patriotic War: who are they? To answer this question, no need to guess for a long time. There is no such kind and type of troops in which Soviet women would not fight. And on land, and at sea, and in the air - everywhere you could find female warriors who took up arms to protect their homeland. Names such as Tatyana Markus, Zoya Kosmodemyanskaya, Marina Raskova, Lyudmila Pavlichenko, are known, perhaps, to everyone in our country and the former Soviet republics.

Official statistics say that 490 women were drafted into the army and navy. All of the women were formed three aviation regiment - 46th Guards Night Bomber, 125th Guards Bomber and 586th Fighter Air Defense Regiment, as well as a separate female company of sailors, a separate female volunteer rifle brigade, a central female sniper school and a separate female reserve rifle regiment. But in reality, the number of women who fought was, of course, much higher. After all, many of them defended their country in hospitals and evacuation centers, in partisan detachments and underground.

And Motherland fully appreciated their merits. 90 women deserve the title of Hero of the Soviet Union for their deeds committed during the Great Patriotic War, and four more became full holders of the Order of Glory (see the list below). And women - holders of other orders and medals hundreds of thousands.

Most of the women who deserved the highest rank of the country on the fronts of the Great Patriotic War were among the pilots. This is easily explained: after all, there were as many as three purely female regiments in aviation, whereas in other combat arms and types of troops, such units were almost never encountered. In addition, the share of female pilots had one of the most difficult tasks: night bombing on the “celestial slug” - the U-2 plywood biplane. Is it any wonder that from 32 women pilots who received the title of Hero of the Soviet Union, 23 are “night witches”: this is how German warriors who suffered heavy losses from their night raids called the heroines. In addition, it was the female pilots who were the first to receive the highest rank even before the war. In 1938, the crew of the Rodina plane, Valentina Grizodubova, Polina Osipenko and Marina Raskova, received the highest award for a non-stop flight Moscow-Far East. 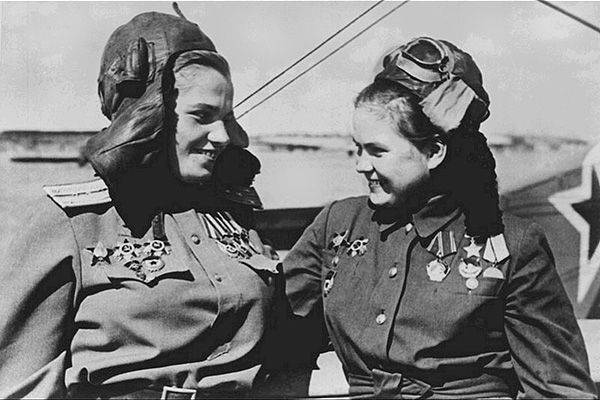 Pilots of the female air regiment. Photo: warmuseum.ca
Of the more than three dozen women - gentlemen of the highest ranks of seven received him posthumously. And among them is Ekaterina Zelenko, the first female pilot who rammed a German plane, Su-2 bomber pilot. She, by the way, was given this title many years after the end of the war - in 1990. In aviation, served and one of four women - the full gentlemen of the Order of Glory: Air Rifle reconnaissance air regiment Nadezhda Zhurkina.

Slightly less than female pilots among the Heroes of the Soviet Union are women underground fighters and partisans - 28. But here, unfortunately, the number of heroines who received the title posthumously is much greater: 23 underground fighters and partisans accomplished exploits at the cost of their lives. Among them is the first woman - the Hero of the Soviet Union during the war years Zoya Kosmodemyanskaya, and the pioneer hero Zina Portnova, and the participants of the “Young Guard” Love Shevtsova and Uliana Gromova ... Alas, the “silent war”, as the German invaders called it, was always conducted until complete destruction, and survive, actively acting underground, few succeeded. 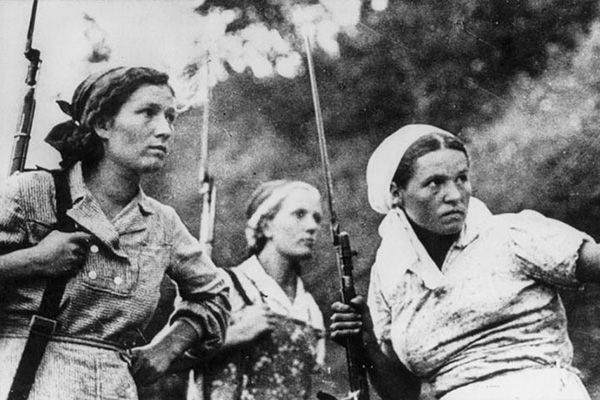 Of the nearly 700 thousand doctors in the army, about 300 thousand were women. And among 2 million middle and junior medical staff, this ratio was even higher: almost 1,3 million! At the same time, a lot of girls, medical instructors, were constantly at the forefront, sharing with the male soldiers all the hardships of the war. Therefore, it is logical that, according to the number of Heroes of the Soviet Union, female doctors are in third place: 15 people. And one of the full holders of the Order of Glory is also a medic. But the ratio of the living among them and those to whom the highest rank was awarded posthumously is also indicative: 7 out of 15 heroines did not live to see their glory. Like, for example, the medical officer of the 355th Pacific Separate Marine Corps Battalion fleet sailor Maria Tsukanova. One of the twenty-five-thousand-year-old girls who responded to the order to call up 25 female volunteers into the navy, she served in coastal artillery, and became a medical instructor shortly before the landing attack on the coast occupied by the Japanese army. The medical instructor Maria Tsukanova managed to save the lives of 000 sailors, but she died - this happened on August 52, 15 ... 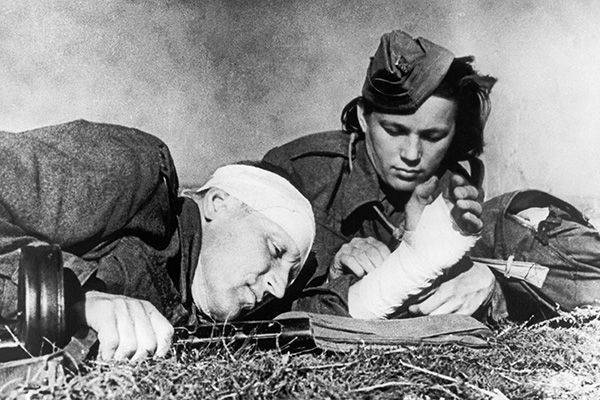 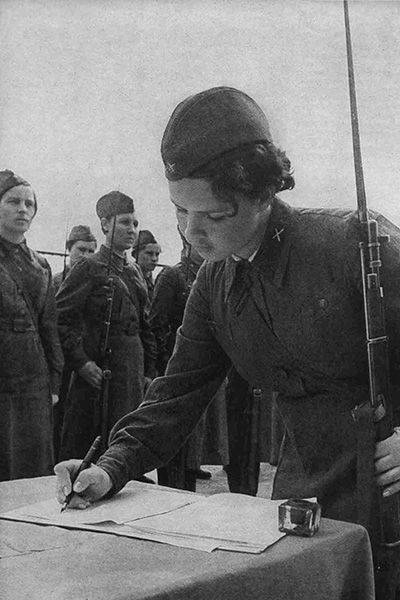 It would seem that even during the war years, the woman and the infantry were difficult compatible. It’s one thing - pilots or doctors, but infantrymen, the workhorses of war, people who, in fact, always and everywhere start and end any battle and endure all the military life ... Nevertheless, women who risked not just to share with men the difficulties of an infantry life, but also to master hand weapons, which required considerable courage and skill from them. Among the women infantrymen are six Heroes of the Soviet Union, five of them received this title posthumously. However, the ratio will be the same for male foot soldiers. In the infantry served and one of the full gentlemen of the Order of Glory. Remarkably, among the heroines of the infantry is the first woman from Kazakhstan who deserved such a high rank: machine gunner Manshuk Mametova. During the liberation of Nevel, she alone with the machine gun held the dominant height and perished, and did not miss the Germans.

When they say "woman sniper", the first name that comes to mind - Lieutenant Lyudmila Pavlichenko. And deservedly so: after all, she received the title of Hero of the Soviet Union, being the most efficient female sniper in stories! But besides Pavlichenko, five more of her fighting friends were awarded the highest award for the art of shooting, and three of them were posthumous. 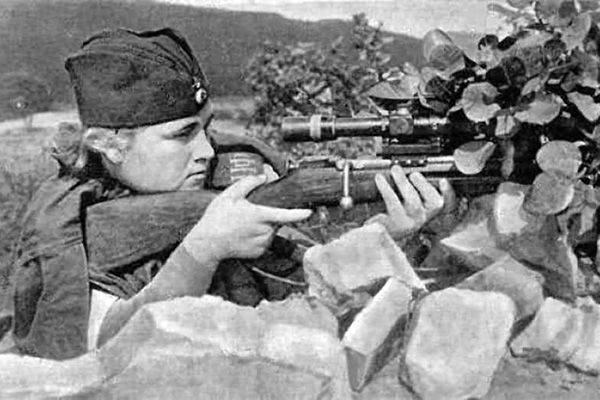 One of the full gentlemen of the Order of Glory is foreman Nina Petrova. Her story is unique not only because she had 122 destroyed by the enemy, but also a sniper's age: she fought when she was already 52! Few of the men sought the right to go to the front at that age, and the sniper school instructor, behind which was the 1939 – 1940 Winter War, achieved this. But, alas, she did not live to see Victory: Nina Petrova died in a car accident a week before her, 1 May 1945. 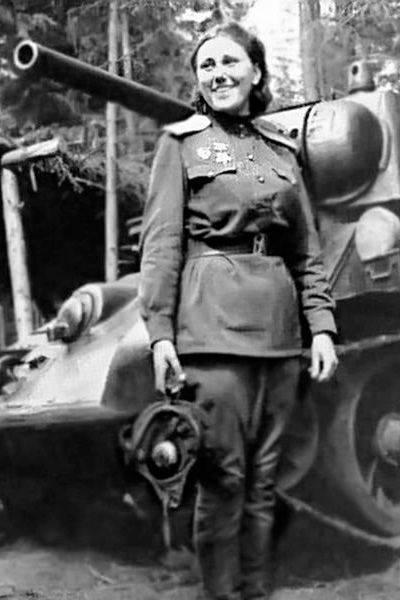 Soviet tanker. Photo: militariorgucoz.ru
You can imagine a woman at the controls of an airplane, but behind leverage tank - not so easy. Nevertheless, there were female tankers, and not just were, but achieved great success at the front, receiving high awards. Two female tankers received the title of Hero of the Soviet Union, and one of them, Maria Oktyabrskaya, was posthumous. And she died, under enemy fire repairing her own tank. Own in the literal sense of the word: the tank "Fighting girlfriend", on which Maria fought as a driver, was built on the money collected by her and her sister after the woman found out about the death of her husband, regimental commissar Ilya Oktyabrsky. To achieve the right to take a place behind the levers of her tank, Maria Oktyabrskaya had to turn to Stalin personally, who helped her get to the front. And the high confidence of the female tanker fully justified. 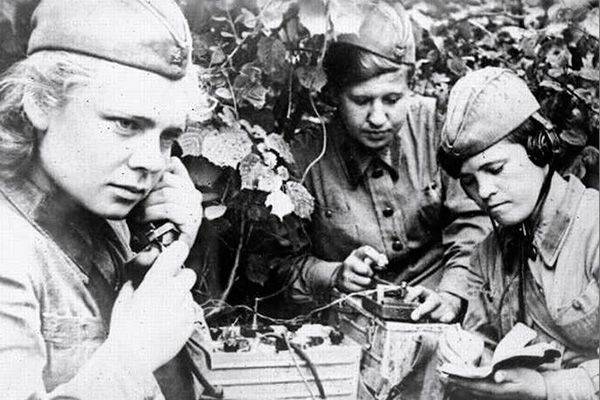 One of the most traditional book and movie characters associated with the war is the signaler girls. Indeed, for delicate work requiring assiduity, attentiveness, accuracy and good hearing, they were taken willingly, sending to the troops telephonists, radio operators and other communication specialists. In Moscow, on the basis of one of the oldest divisions of the communications troops during the war years there was a special school where girls were trained. And it is quite natural that among the signalers there were found Heroes of the Soviet Union. Moreover, both girls, who deserved such a high rank, received him posthumously - like Elena Stempkovskaya, who, during the battle of her battalion surrounded, caused artillery fire on herself and died during the breakthrough to her own.