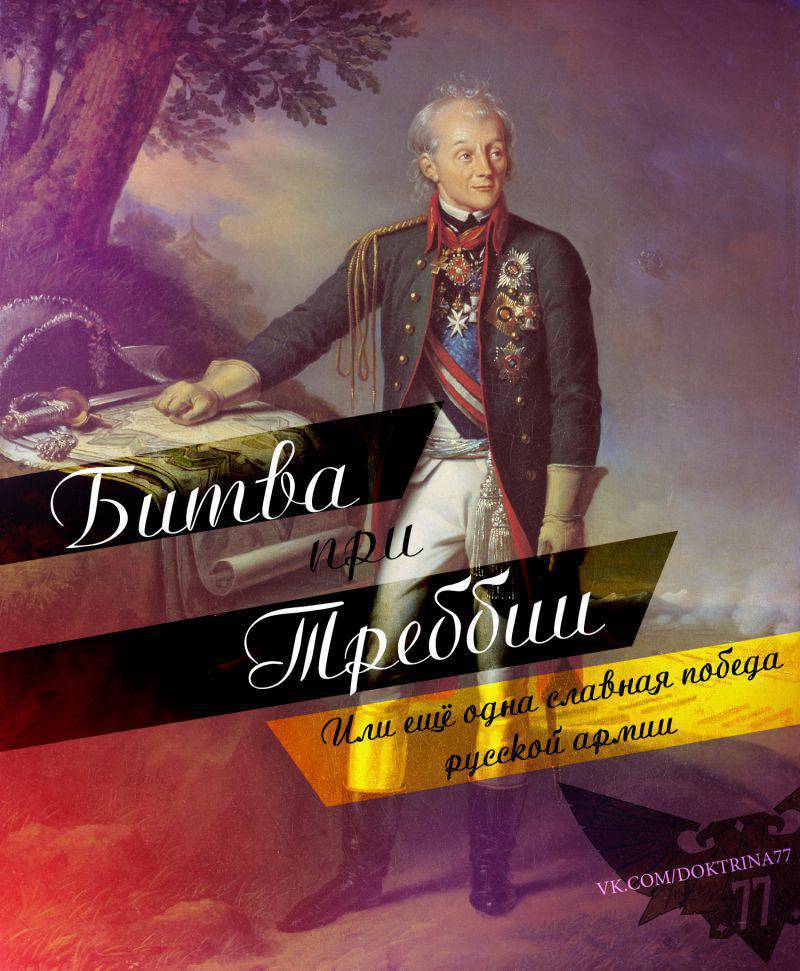 18 June 1799, the Russian army under the command of Alexander Suvorov, who made an unexpected crossing over the Alps, defeats the French army on the Trebbia River in Northern Italy.

The Battle of Trebbia in 1799 is one of the greatest achievements in the world. stories military art, proved once again the power of Russian soldiers and the great military talent of Suvorov. This is one of those rare battles that ended not only with the defeat, but also with the destruction of the bulk of the troops of the superior enemy.

The total number of Suvorov’s army was about 30 thousands of people (Russians and Austrians), of whom 22 thousands participated in the battle, and 8 thousands guarded the rear of the Russian army, to which General Moreau’s army nominated thousands.

The battle began on the evening of June 17, when the advanced parts of Suvorov reached the Tidone River, making an unprecedented march maneuver (almost without stopping, 80 km was completed in 36 hours). Most of the units left behind during the march (in the companies, according to the report of Bagration Suvorov, fewer than 40 people remained) and caught up at night, but the sudden attack of small troops led to the complete defeat of the French, who, having lost about 1,2 thousands of prisoners and about 2 thousands killed , were driven back to Trebbia. 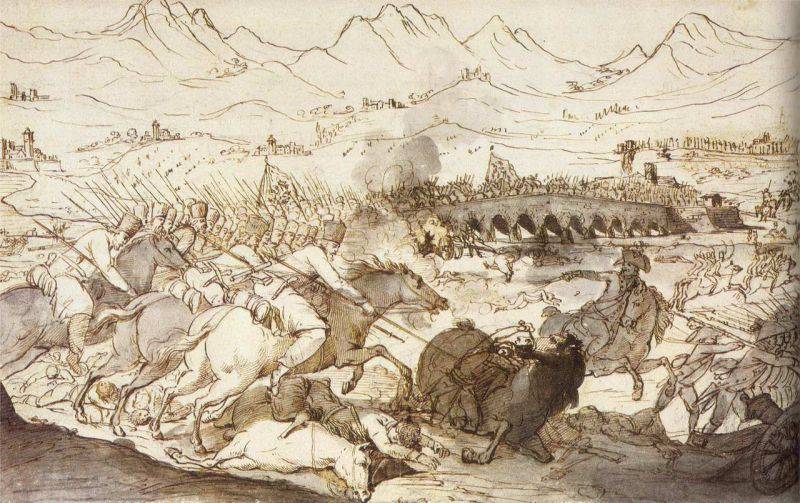 Suvorov’s plan for the battle of Trebbia was to chain the French troops in the center and on the right wing with Austrian troops, to strike the left wing of the French with a blow of the Russian troops, to withdraw them to the rear and destroy the French army. To achieve this goal on the left wing were concentrated up to 15 thousand people - two-thirds of Suvorov's forces. The battle of 18 June took place with equal forces and ended with another defeat of the French army, rejected and suffered heavy losses. However, due to the great fatigue of Suvorov's troops, who had not rested after the march and the non-energy actions of the Austrian allies, the French army was not defeated.

At night, the reinforcements approached dramatically changed the balance of forces. MacDonald, who knew that the number of Russian troops is small, decided to go on the offensive. Suvorov, aware of the approach of the fresh French troops, did not cancel the offensive and did not change the direction of the main attack.

The battle of 19 June was marked by a critical moment in the center of the Russian troops, retreating under the onslaught of the many times superior forces of the French. However, the mere appearance of Suvorov in the center was enough for the newly retreating, practically defeated troops to turn the French to flight. According to eyewitnesses, the arrival of Suvorov replaced the appearance on the battlefield thirty thousand people. On the left flank, Russian troops during the day, with bayonet attacks, smashed and destroyed the bulk of the French troops. By evening, the French army was "brought to a complete impossibility to fight." Broken parts of the army were driven over Trebbia.

On the battlefield, 6 thousand French left. Wounded was 7154 (on the morning of June 9 they were captured). In the battle of 17-19, June prisoners were taken over 5000 (total number of prisoners: General 4 (Ruska, Salm, Cambrai and Olivier (died from wounds); 510 officers (including 8 colonels), 11 766 non-commissioned officers and privates) resulting in French losses in the Battle of Trebbia exceeding 18 000 people. Suvorov lost 900 people killed, 4 300 wounded. person.

On the night of June 19, the French army command on the council unanimously concluded that the resumption of the battle the next day would lead the French army to an immediate catastrophe. The French troops, leaving the wounded, withdrew from the positions and began to retreat.

The pursuit, which according to Suvorov’s plan was to lead to the complete destruction of the Neapolitan army, was conducted without due energy by General Melas for two days and led to the capture of 7000 French. Thus, the total losses of the French army ranged from 23 to 25 thousand people. Its insignificant remnants joined the French Italian Army Moreau. The Neapolitan army ceased to exist as a result of the battle at Trebbia.

MacDonald will say many years later about his defeat: "I was young during the battle at Trebbia. This failure could have a detrimental effect on my career, I was saved only by the fact that Suvorov was my winner."