What answer to "Poseidon"

July 15 2015
42
Deep modernization of IL-38 is only the first step on a long way
On the last day of June at the airport LII them. M. M. Gromova command of the maritime aviation The Russian Navy transferred the fifth modernized IL-38N aircraft (Novella). The work was carried out under a contract signed in 2012 and included in the state defense order.

The dark gray, almost black cigar of the plane glittered with a red rag spot in the bow — the organizers hung the name given to the car to reveal it to the participants in a solemn ceremony. And after the short introductory part, two general directors, whose teams became the main actors in the creation of the modernized aircraft, - Sergey Velmozhkin (OJSC "Il") and Kirill Sidorenko (OJSC "TsNPO" Leninets ") to the applause of the assembled rag break ... 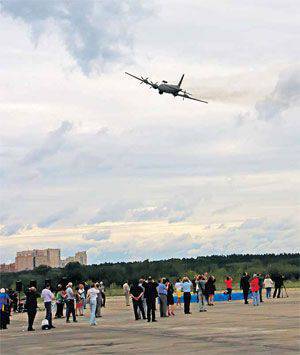 The name of the aircraft was correct - "Fedor Zolotukhin", in honor of the general designer who developed the search and sighting system "Novella-P-38". This PPP is the main highlight of the model, for good reason its name was included in the name. But in addition to replacing the system, each of the five transferred aircraft underwent repairs and upgrades, received an extension of airworthiness. The works were carried out by JSC "Il" and JSC "TsNPO Leninets" with the participation of the United Aircraft Building Corporation.

The reason for the appearance of the IL-38 was significant progress in the development of underwater fleet. Already in 1960, American submarines, each carrying 16 Polaris missiles, began combat duty at the border of the territorial waters of the USSR - in the Norwegian Sea. The threat required an adequate response; among other options, counteraction to the enemy from the air was considered.

Practically there were no problems with the choice of aircraft - Il-18 was taken as a basis, but the development of the search filling for the new system was carried out practically from scratch. Previous analogues and, accordingly, there was no experience. The search and targeting system was given the name "Golden Eagle", it was born slowly and in agony.

Test pilot Vladimir Kokkinaki lifted into the air a new IL, still not having any electronic filling, 27 August 1961 of the year. A state tests of IL-38 with a complete set of search equipment began only in June of 1965. And only in January, the 1969 of the IL-38 with the Berkut PPS adopted the USSR Navy. According to reports, a total of 65 aircraft were produced, which corresponded to about a quarter of the naval aviation requirements for such machines.

Any complex technique without people capable of competently using it is useless hardware. Says the chief pilot of IL, honored test pilot, Hero of Russia Nikolai Kuimov: “To a pilot of such an aircraft without special knowledge anywhere. Moreover, the entire crew should be competent. And the more harmonious he is, the better he understands all the intricacies of the equipment used, the more effective the search will be. Fly accounted for at altitudes from eight thousand to one hundred, and even up to fifty meters. For example, the use of magnetometry is most effective precisely from low altitudes. Similarly, using the search equipment in the optical and infrared. I must say that piloting at low altitudes is carried out only manually, the autopilot does not apply and you need to keep ears on top of your head. And if poor visibility ... "

What answer to "Poseidon"

IL-38 serve regularly for many years. Back in Soviet times, flights were carried out not only in our territorial waters, but also in the Mediterranean, over the Indian Ocean, in Southeast Asia ... So, in naval aviation of the Russian Navy there is a school, traditions, and vast experience in using anti-submarine patrol vehicles the world. The crews can move mountains with what they have, and with modern technology they will do the impossible.
Search and sighting system "Novella-P-38" began to develop in the most difficult for the Russian "defense" time - in 90-e. The situation was saved by the fact that the Indians really liked the idea of ​​raising the possibilities of search engines purchased earlier to a fundamentally different level. And the first IL-38, which underwent a deep modernization and received a new PPP, were made for India and were called IL-38SD. The plane turned out to be very successful, and therefore, as soon as the Russian defense ministry found money for a deep modernization of Russian machines, the contract was signed. The principal difference is that “our” version does not have pylons for external suspension of anti-ship missiles. Although no one denies that the equipment of the RCC in the future is not excluded.

What we have as a result of deep modernization? With the help of a new search and sighting system, the aircraft can successfully accomplish the tasks of patrolling, searching and destroying submarines (moreover, using the nomenclature of armaments extended compared to the base Il-38), radio-electronic surveillance of surface and aerial targets, mine obstacles, search and rescue people at sea, as well as environmental monitoring of the water surface.

All possibilities incorporated in the system for obvious reasons are not advertised. But experts say that this aircraft can be considered a full-fledged analogue of the American P-8A Poseidon, which the "partners" began to exploit a couple of years ago.

The new version of the marine pilots’s machine did not disappoint, and the full potential of it was yet to be mastered. Here is the opinion of the Chief of Naval Aviation of the Navy Igor Kozhin, Hero of Russia: “Now there is a trial operation. The system works, we will upgrade it further. The world is moving forward, we must not fall behind. And together with "Lenin", the developer of "Novels", and with other firms we are currently working on improving the system. The Chief of the General Staff and the Minister of Defense set the task for intelligence systems like this to be integrated into the general situation lighting system. ” In fact, it is about the fact that the data received by patrol aircraft, online broadcast information into a unified system of coverage.

... The hour of speeches, memories and congratulations flew by quickly. Il began to warm up the engines and after about fifteen minutes he drove to take off. And then at a low altitude passed over the crowd. From the ground on the "Fedor Zolotukhin" looked invited to the celebration son designer Artem. Perhaps for him it was the most memorable day in life.