Group of Companies "Tethys" at the Seventh International Navy Salon

July 15 2015
2
The seventh International Naval Salon, which took place in St. Petersburg from 1 to 5 July at the Lenexpo exhibition complex, ended.


At IMDS-2015, achievements in the field of shipbuilding, shipbuilding, marine engineering, technologies and materials were presented - the latest developments from leading Russian and foreign companies. A total of 424 participants from 28 countries submitted more than 200 marine equipment samples. In addition, 62 foreign delegations from 46 countries visited the salon.

The exposition of the Navy Salon was located on 17 thousand square meters. m. in the pavilions, as well as on the open exhibition area. 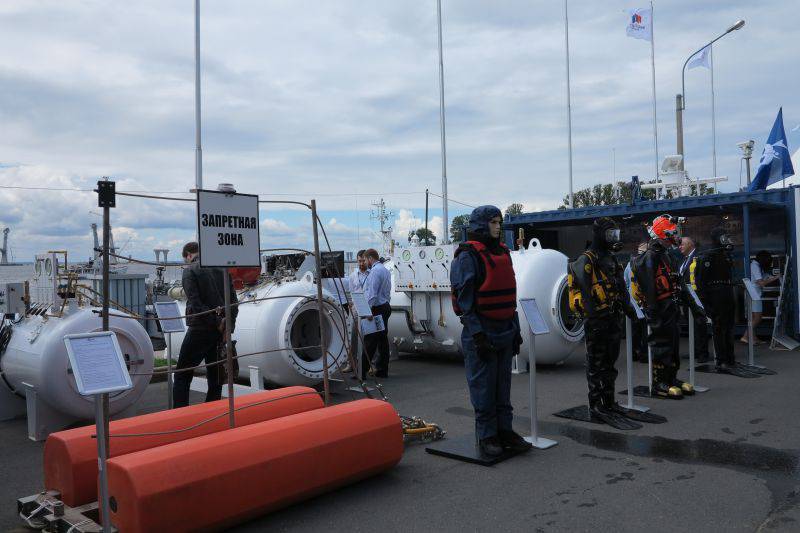 The Tethys Group of Companies, which has been a supplier of underwater equipment for the needs of the Navy for more than 15 years, presented at the exhibition a line of qualitatively new technical equipment developed and produced by the Civil Aviation Group over the past two years for the integrated solution of the tasks of the search and rescue support and anti-submarine defense forces of the Military -Sea Fleet.

This year, as part of an open exhibition, the GK demonstrated modern developments in the areas of underwater technical equipment and physical protection facilities: a series of BKD pressure chambers, remote-controlled and autonomous uninhabited underwater vehicles, new diving equipment and rescue equipment, anti-hauling booms PBZ, as well as universal Mobile container diving complex (UMKVK), designed to provide diving descents by the method of short-term diving, as well as decompression and therapeutic recompression in water. 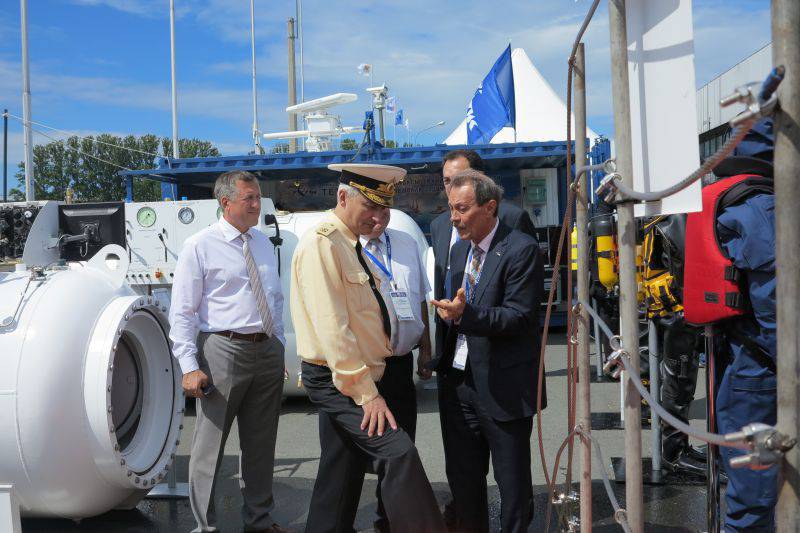 The general director of the Tetis Group of Companies, Alexey Alexandrovich Kaifadzhyan, reported to the Commander-in-Chief about the work carried out within the framework of cooperation between the Civil Code and the Navy. Viktor Viktorovich, in his turn, paid special attention to the uninhabited underwater vehicles “Marlin-350” and “Concept-M”. 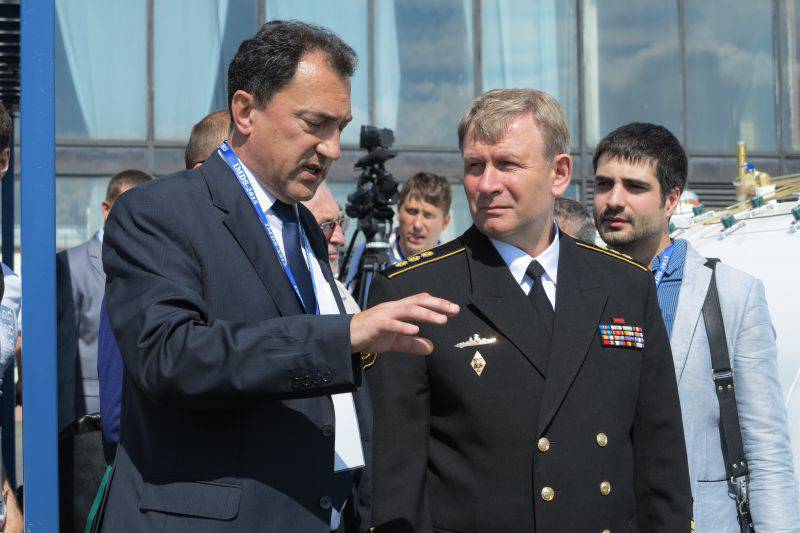 Recall that the small-class remotely controlled underwater vehicle (TNLA) “Marlin-350” for search and survey work with a maximum depth of dive - 350 meters in March of this year successfully completed state tests, which resulted in the letter O1. The site for its mass production has already been prepared, and soon the underwater robots will begin to enter the fleets of the Russian Federation.

Unlike its remote-controlled comrade, the autonomous, uninhabited Concept-M submersible, created to solve a wide range of tasks in surveying and lighting the underwater situation at depths up to 1000 m, is now undergoing the final stage of state testing. But despite this, the ANP has already aroused great interest of the professional community. 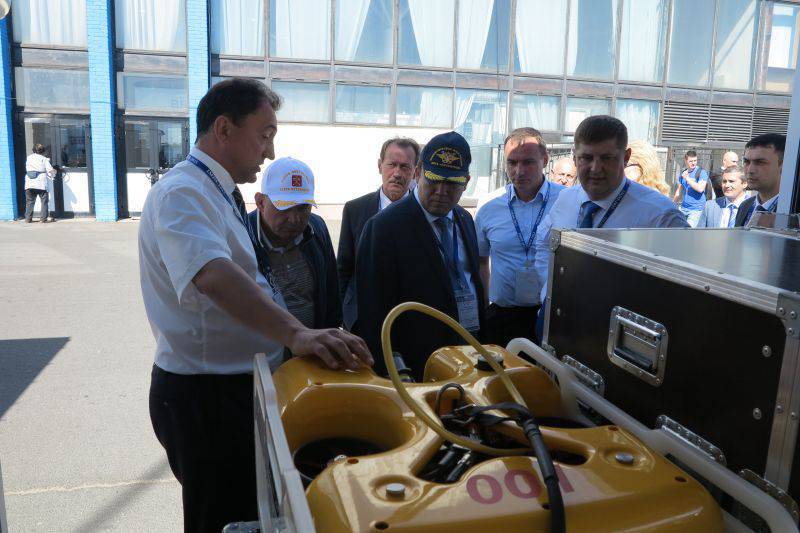 On the second day of the exhibition, the grand opening of the 7 International Maritime Defense Show took place. The official event was attended by: Deputy Prime Minister of the Russian Federation Dmitry Rogozin, Commander-in-Chief of the Navy Viktor Chirkov, Presidential Plenipotentiary in the North-West Federal District Vladimir Bulavin, Assistant to the President for Military-Technical Cooperation Vladimir Kozhin and Governor of St. Petersburg Georgy Poltavchenko.

During the opening ceremony, Dmitry Rogozin emphasized that: "By demonstrating the armament of the Navy, Russia wants to show its power to the world and at the same time strive for peace." 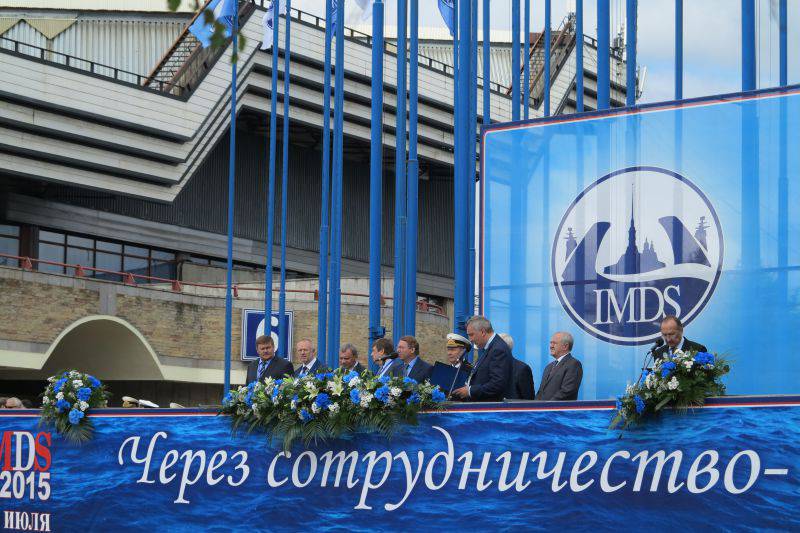 At the end of the official part, the Strizhi, Russian Knights and Rus aerobatic teams rose to the sky. Specialists and workers of the expositions left their stands and rushed to the observation deck, where the best pilots of the country and the world demonstrated such elements of aerobatics as the Nesterov Loop and the Oblique Loop, the Bell and the Cobra Pugachev, the dissolution of the Fountain and "Mirror", and much more. In addition to specialists, simple visitors could see the unique air show, which, despite the working days, gathered a lot. The spellbound crowd watched with a sinking heart for the most complicated air stunts that the pilots could not repeat in any of the countries of the world except Russia.

The Marine Salon took over all the elements: more than 30 ships, boats and ships from the Navy, the Border Guard Service of the Federal Security Service of Russia and enterprises participating in the Salon, including the anti-diversion boat "Rook" equipped with the Kalmar Search and Survey Complex (POC), a ship diving complex and equipped with diving equipment developed and supplied by Tethys Pro OJSC, as well as a modular boat SMK-2098 ARISING of "CAMPO", included in the group of companies "Tethys". 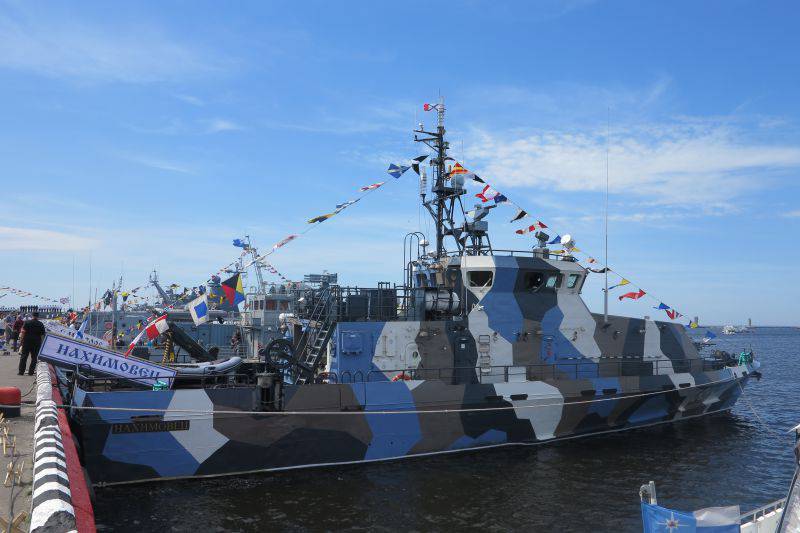 In the media, the boats of the 23370 project have already been called transformers, comparing them with the Lego designer. At the same time, the modularity of the boat consists not only in its design features - it is assembled from individual transportable block modules with full technical saturation and decoration, but also in principle for completing it with special equipment. It is the complexes of various equipment, located on the deck, on the basis of container modules, which allow using the boat for performing various tasks. 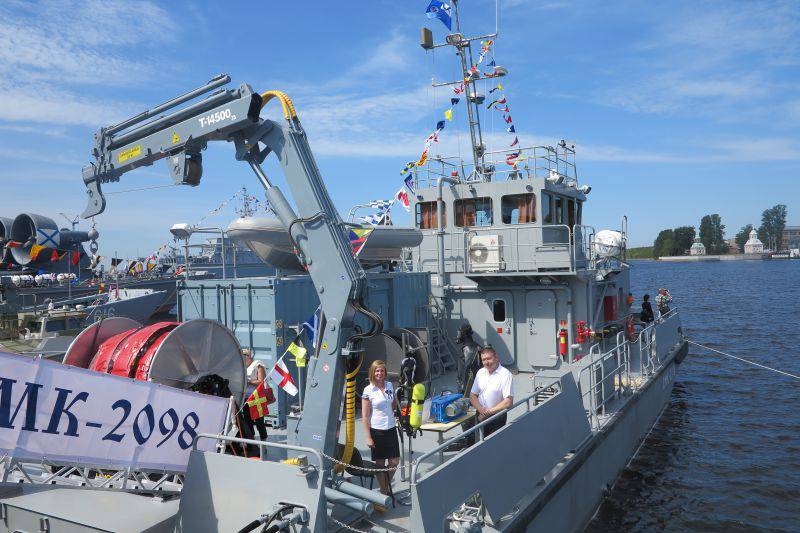 Both the command of the Navy and the professional community recognize that the future of the Russian fleet lies with the module ships. Thanks to a special design, ships can be upgraded without rebuilding them, but only by changing individual modules. In addition, the modernization allows not only to improve the vessel, but also to change its purpose depending on the assigned tasks. So the 23370 project boats can be used as diving, search and rescue, situational, fire and environmental boats, as well as to provide physical protection systems for ports.

Any visitor to the exhibition could get on board the ships, so endless queues lined up on the quays wanting to get acquainted with the inner specifics and life of the sailors.

There was no shortage of visitors during the days of the Naval Salon: in the pavilions, in the open spaces and the demonstration cluster was extremely lively. The exposition of the Group of Companies aroused the genuine interest of specialists and guests of the exhibition. Behind a photo with our “divers” in diving equipment SVU-5-1, SVU-5-2, as well as in the “Sibir” diving suit, there were long lines. The BKD pressure chamber bar with diameters 1000, 1200 and 1600 mm attracted the views of Russian and foreign shipbuilders, and ordinary visitors were keenly interested in the purpose and tactical and technical characteristics of the equipment. 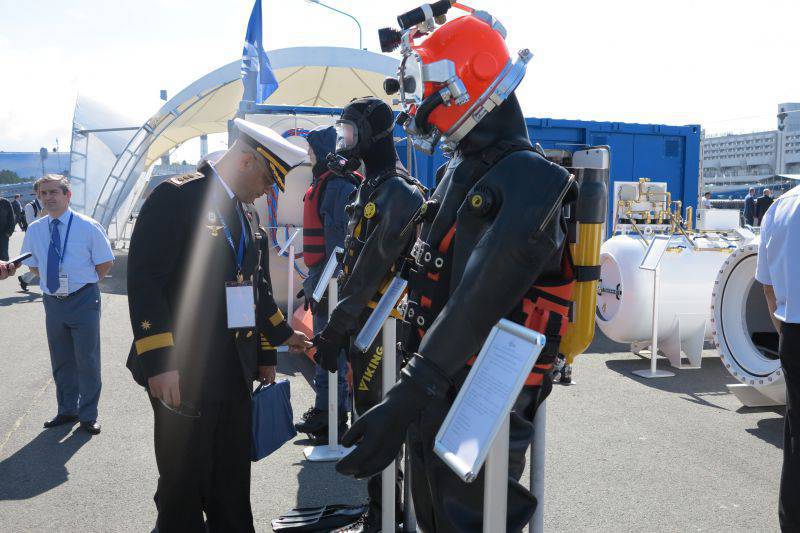 As part of the cabin, the management of the Group of Companies held a series of negotiations with representatives of the Ministry of Defense and shipbuilders on the supply of ship diving and search and survey complexes, diving equipment and remote control vehicles both to the Navy and the ships under construction, as well as within creating modern training diving complexes.

The equipment and equipment presented on the stand interested the media representatives. Interviews with Tethys specialists about underwater robots and other GK developments can be seen on Pervaya, Russia-1, OTR and Zvezda TV channels, as well as on the Flot.com Central Naval Portal. 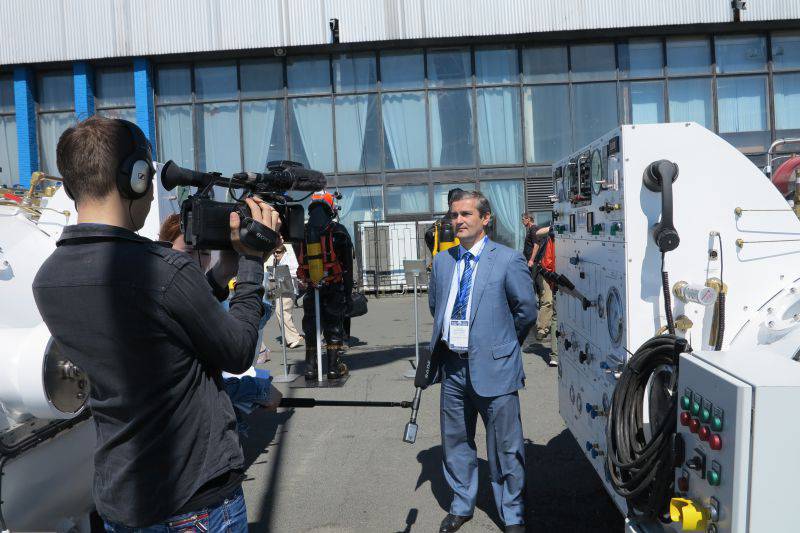 According to the estimates of the management of the GC “International Naval Salon, being one of the world's leading exhibitions in the field of shipbuilding, naval armaments and shipbuilding, reaffirmed its high status. The salon allowed the potential buyers to demonstrate their latest developments and, at the same time, hold negotiations on the supply of equipment and equipment on the spot. The exhibition was effective for us, allowing for these days to discuss all the necessary issues with defense industry enterprises and representatives of the Ministry of Defense. ”

According to the results of the IMDS, Tetis Pro was awarded a laureate diploma and a commemorative medal "For the Best Exhibit". 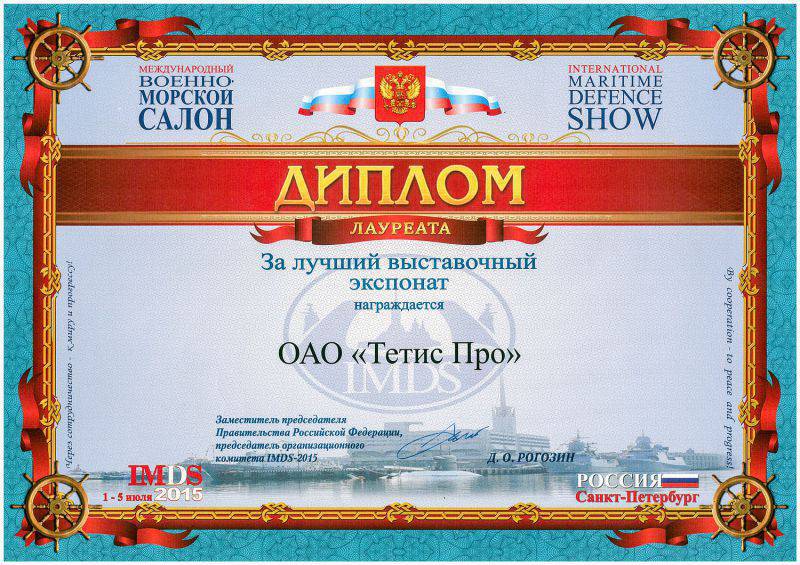