Serbs do not surrender 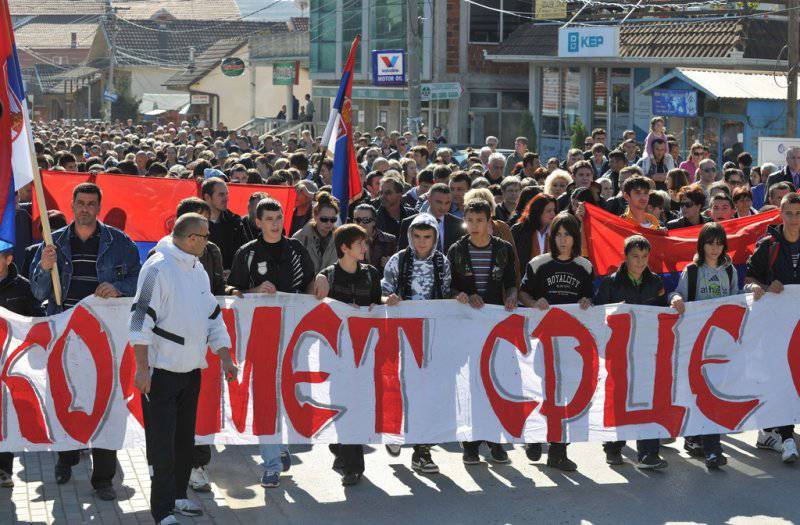 According to media reports, last Thursday KFOR units began to dismantle the barricades erected by the Serbs on the so-called border of Kosovo and the rest of Serbia. On the eve of the representatives of the "peacekeepers" tried to negotiate with local residents, however, their persuasion to remove the barricades had no effect. NATO gendarmes began to demolish the barricades, using their armored personnel carriers. Everything was clear already the day before, when the representative of the command of the NATO forces in Kosovo, Lieutenant Colonel Adamets, declared that the alliance "would not use force for the demolition of barricades, but, nevertheless, reserves this right."

To disperse the Serbian patriots who were trying to defend the fortifications built by them, getting in the way of armored vehicles, NATO members used tear gas and rubber bullets. In the course of dispersing people, the followers of democratic transformations in Kosovo also used loudspeakers, naively believing that people who were driven to despair would begin to go home, obediently listening to their calls.

It is known that by now in the town of Lamb the NATO members have partially demolished the barricade erected by the local Serbs to the “Brniak” checkpoint, the resistance has temporarily stopped. According to ITAR-TASS, for the defense of the barricades, the Serbs organized a human shield around her, and KFOR troops took up positions opposite the barricades and are awaiting new orders. Prior to that, the Keifor managed to evacuate one of the three trucks with which the Serbs tried to block the road to the checkpoint.

It seems that the NATO warriors have very serious plans to take the newly-minted border under their complete control in order to completely isolate the territory of Kosovo from the rest of Serbia. It is reported that another KFOR convoy arrived at the barricade near Жupca, which is also on the way to Brnyak. At the same time, the Serbs still have to gather their strength - in the area of ​​yet another major checkpoint "Yarinje" the situation is relatively calm, NATO members have not been noticed there.

The main Serbian henchman of the West, who passed one after another of his heroes-generals to the Hague court, President Tadic could not remain silent and, in order to at least somehow whitewash himself in the eyes of his people, called on KFOR and the European police command EULEX to “refrain from any the use of force ", and the Serbs who defend their villages -" act only in the interests of the population. " It turns out that Tadic, unwittingly, called on the Serbs to start an armed struggle, because in this case “acting in the interests of the population” means fighting the occupiers for the very possibility of preserving this population in these territories.

Recall that the situation in the zone of the so-called border of Serbia and Kosovo began to worsen in mid-September. The conflict broke out very quickly for the reason that the Serbs were ordered to surrender two controversial checkpoints, Brniak and Yarinje, located in the far north of Kosovo on the most demarcating line with Serbia, conducted by the NATO interventionists. Kosovo Albanians intend to place their customs officers and police officers, yesterday’s gangsters and murderers of Serbian women and children on these checkpoints as soon as possible and to completely cut off the Serbian region of Kosovo from the rest of Serbia forever. In order to prevent the continuation of arbitrariness on their land, the Kosovo Serbs, who are an absolute majority in the north of the province, have built powerful barricades on the approaches to the checkpoint. NATO "peacekeepers", instead of preventing possible bloodshed, which certainly could not have been avoided after the deployment of Albanian gangsters at the checkpoint, as has happened more than once from the very beginning stories with the secession of Kosovo, openly supported the intention of the Albanian invaders. At the end of September, more than 10 keyforors suffered as a result of the just wrath of the Serbs during the clashes that began.

NATO members are saddening: the worsening of the situation in Kosovo led to the breakdown of the next stage of negotiations by the authorities of Serbia and Kosovo, which was to be held on September 27-28 in the aspen of NATO - Brussels. There is something to be upset: the holding of such negotiations finally tramples in the dirt all the Serbian people, humiliating their dignity to incredible limits. The shame of such negotiations can be compared with the shame of what Kaiser Germany suffered following the results of the First World War, having signed a surrender in the notorious trailer, or Yeltsin Russia, which signed its own insolvency in Khasavyurt.

For those who have forgotten how the current Kosovo drama began, we recall that the military contingent was introduced to the Serbian territory of Kosovo after 78 days of bombing of the territory of Serbia aviation NATO countries. The Alliance, with its characteristic arrogance, despite violating international law, intervened in the hostilities of the army of Serbia (then Yugoslavia) in 1998-1999, and supported the Albanian separatists operating under the command of the Kosovo Liberation Army terrorist organization, funded not only by Islamists, but also by the US government, which, by and large, is not important, since Islamic radicalism has also been financed by the West for many years, which is no secret to anyone. After the bombing ended, KFOR forces were introduced into the region, whose task is to prevent the re-start of hostilities and maintain public order and security in the region.

The newly appeared Albanian authorities of Kosovo, which for Serbs are the same as the Mecca for Muslims, 17 February 2008 of the year unilaterally, using the open support of the USA, proclaimed independence of the province of Kosovo from Serbia.

Now about who will protect the Serbs now that they have lost almost everything. Russia, whose peacekeepers left Kosovo for reasons beyond understanding?

So far, it is unlikely ... The fact is that in order to protect the Serbs, it is necessary that they want it. More precisely, the Serbian authorities, who, for the most part, have sold themselves to the West, should want this. This does not mean that there are no patriots left in Serbia, it only means that the Serbs need to start with a change of leadership in Belgrade to return the Kosovo lands, or at least parts of them. Undoubtedly, Serbia is the most important outpost of the Orthodox world in the region. One way or another, Russia will have to sort out the situation, as if some of us would not object to this. Our fate in a historical perspective directly depends on how the story ends with Kosovo. However, to allow a situation in which the Serbs, according to Protodeacon Andrei Kuraev, will be “ready to fight for Orthodoxy to the last drop of Russian blood,” does not follow. At the same time, Russia's efforts in the Serbian direction should be much more active. We have no right to lose Serbia!

We are in Yandex Zen
Armored vehicles of Yugoslavia. Part of 6. Wars in the ruins. Bosnia and Herzegovina. Kosovo. Macedonia
New Serbian President supports Putin, opposes NATO and Kosovo independence ("The Weekly Standard", USA)
30 comments
Information
Dear reader, to leave comments on the publication, you must to register.