Why Mukachevo? Gas Background of the Right Sector Attack 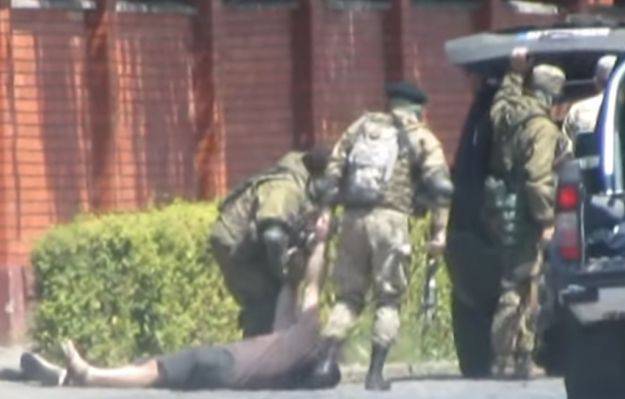 What a difficult, unclean force suffered on Saturday 11 July looking armed to the teeth (with machine guns, grenade launchers, etc.) special forces of the Right Sector from the Ukrainian Volunteer Corps (DUK) in Mukachevo? What could they not share there in some local cafe with armed guards of the local people's deputy of Ukraine, Mikhail Lanyo, who was formerly in the Party of Regions, and after the February rumble of 2014, who joined the Opposition Bloc? And then another - and with Mukachevo police? More than a dozen victims of the shootout, including civilians, a massive transfer of National Guard forces to the Transcarpathian region ... What actually happens?

Among the “Pravoseks” themselves, information is spreading that their fighters entered into a firefight with smugglers, who were “protected” by Lanyo, who intended using these criminal elements to proclaim the “Transcarpathian People's Republic”. “Checkpoints” on Ukrainian roads, protest actions in almost all major cities that recognize Kiev’s power, threats to bring battalions to government buildings, demands for Avakov’s resignation from Dmitry Yarosh’s entourage, who called on his “comrades-in-arms” not to surrender - and demands for the dissolution of the Supreme Happy with the new early elections from the ranks of the opposition. By all indications, "United Ukraine" is experiencing an acute political crisis these days.

But why - Transcarpathia? And why - right now?

Residents of the Transcarpathian region with a center in Uzhgorod are, for the most part, not Ukrainians, as follows from the official data of the national census 2010 of the year (over a million people, or about 80% of the population), but the Rusins ​​(whom Ukrainian statistics counted as much as ten thousand, 0,8%). But, according to the activists of the Ruthenian movement, the Ruthenians did not disappear anywhere in the region, there are still more than 800 thousand people, and they have nothing in common with the Galicians and other Ukrainians, but they don’t want to have it.

In the region, the Republic of Subcarpathian Rus was formally proclaimed a long time ago, since 2008, the World Ruthenian Congresses are held regularly (by the way, precisely in Mukachevo), contacts with the Hungarian minority (more than 150 thousand people) have been established, so that in relations with Kiev Rusyns and Hungarians stand "united front." Note that the Republic of Subcarpathian Rus, which the Ruthenians really proclaimed, and the Transcarpathian People’s Republic, which official Kiev and the “single Ukrainian” society of Pravoseki now frighten, are not the same thing. But the political moments of the conflict should still be considered secondary, although for the Kiev authorities, supporters of sovereign Transcarpathia, whatever they call themselves, are the same “separatists” like the residents of Donbass. Even worse. And that's why.

If Donbass was the “industrial heart” of Ukraine, then Transcarpathia is its “transit heart.” The “Square” export “pipe” of oil and gas pipelines, which starts from the Russian border, ends precisely in this area, which borders simultaneously with Poland, Slovakia, Romania and Hungary.

To understand the situation with the transit, for example, of the same gas, one can say that 2009 million cubic meters of gas passed through GIS Uzhgorod in June 41,2 per day, 30,7 million through GIS Beregovo, 2,6 million through GIS Tekovo (Vinogradovsky district) GIS Drozdovichi (Starosamborsky district, Lviv region) - 2,1 million. As they say, feel the difference. At the same time, Mukachevo is located right between the two largest gas transit points from Russia to Europe: from it to Uzhgorod along the highway is slightly more than 40 kilometers, and to Beregovo - 31 kilometers.

And if the pravoseki create their base in this city, they de facto get the opportunity to control the two largest gas measuring stations. Technology worked. GIS staff will be blackmailed and bribed. That is, the Americans behind the Right Sector get their hands on the most powerful instrument of pressure on Gazprom and on its shareholders.

Neither a hypothetical drug traffic, nor much more real smuggling of consumer goods, nor any other business - any degree of criminality - through the territory of Transcarpathia on its scale is fundamentally incomparable with the flow of hydrocarbons flowing from Russia to Europe. According to experts, only “gray” gas schemes can bring their beneficiaries up to 10 billion dollars annually.

Of course, a variant is not excluded (and even quite likely), in which the “pravoseki” Yarosh acted only as a “seed”, and the conflict with their participation would be used as an excuse to saturate the Transcarpathian region with Kiev power structures with the transfer of control over GIS from henchmen "Gazprom" to the appointees of the "Washington Regional Committee". And the fate of the leading personalities of the current Kiev authorities will depend on the success of this operation, of which they, undoubtedly, must be informed by their curators from the US Embassy. If everything goes as it should, they will receive credit tranches and will be able to sit in their chairs for some time, if not ...

Therefore, the passions that flared up in Ukraine around a seemingly insignificant incident in one of the Mukachevo cafes, and the scope of forces suddenly set in motion on this issue, should not be surprised at all.