Srebrenica: the 20 anniversary of the information myth 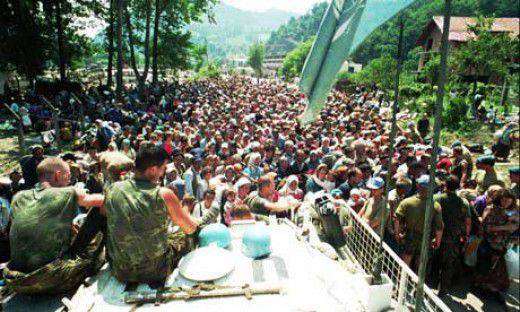 In modern information warfare, international mythology holds a special place. For its introduction are carefully prepared, and the introduction itself is carried out with such powerful infusions that myths become recognizable with one word. Such, for example, "Katyn" "September 11 events" or "Charly Ebdo." In the same row stands the myth called “Srebrenica”. One word - and in the mind as an annoying echo, the words are heard that "in July 1995, the Bosnian Serb troops killed about eight thousand Muslim men and boys." Interestingly, for twenty years, these words are not subject to the slightest change and sound exactly like a mantra.

However, the most important myths are subject to a special procedure: the ritual of legal "consecration." This is done not only to make the myth more “persuasive”, but also to punish those who dare to disbelieve this myth or even dispute it. Among such particularly important myths, of course, is the myth of the events in Srebrenica ...

These days, the "international community" celebrates the anniversary of the "events in Srebrenica" especially solemnly: after all, the anniversary. In addition to the traditional events organized by the Bosniak authorities in Bosnia and Herzegovina, the entire United Nations system was mobilized. A number of states attempted to push through a special resolution of the UN Security Council with the aim of once again condemning the Serbs. (However, there was another goal about which below).

July 8 Jordan, Lithuania, Malaysia, New Zealand, Britain and the United States submitted to the UN Security Council a draft resolution entitled “in memory of the victims of Srebrenica.” Although the text of the resolution was not agreed by all parties, the sponsors demanded that it be put to the vote. Some Council members tried to reason these activists, but in vain. As a result, the project was not supported by five states. The Russian Federation voted against, while China, Angola, Nigeria and Venezuela abstained.

This is not to say that the activists' plans failed. On the contrary, they achieved what they wanted - forced Russia to use a veto. This fact, of course, was used by the “world” media in full: “Russia blocked a resolution condemning genocide ...” The draft resolution was started as an attempt to once again discredit Russia. Nobody really thought about the victims of the Bosnian conflict there. Things reached the point that the organizers of the provocation even forgot to announce a minute of silence. This had to be done ... by the representative of the Russian Federation, Vitaly Churkin, who reminded the chairman that he would have to honor the memory of the dead, and indicated that he means "all the dead", and not only in Srebrenica itself, but also in its surroundings (direct indication of the Serb victims of Muslim thugs N.Orich and others).

The nature of the draft presented can be judged by the following paragraph: “The Security Council ... condemns in the strongest terms the crime of genocide that was committed in Srebrenica, as established in the decisions of the International Tribunal for the Former Yugoslavia and the International Court of Justice, and all Proved war crimes and crimes against humanity committed during the conflict in Bosnia and Herzegovina. " Moreover, the draft resolution insisted that “one of the necessary conditions for reconciliation is the recognition that the tragic events in Srebrenica constituted genocide” and demanded that political leaders on all sides “confirm and acknowledge the fact that these crimes were proved by the above-mentioned courts ". Finally, the project particularly condemned the denial of genocide. (1)

The problem with these passages is that the genocide in Srebrenica has not been proven so far. References to two international courts are very hypocritical. Thus, the International Tribunal for the Former Yugoslavia "established" the genocide in Srebrenica in only one case, despite the fact that this was not established in several dozens of other processes. Moreover, in that one case, legally, genocide has also not been proven. He was "proclaimed" and nothing more. Not a single constituent element of genocide was proved in accordance with the UN Convention on the Prevention of the Crime of Genocide and the Punishment of it 1948 of the Year, including a special intent. It was not even proven that the most "cherished" death toll of eight thousand people. The prosecutor's office had to prove this number by a completely unthinkable argument - to count not the bodies, but separate components of the bodies! And even with such mathematics, they still didn’t work out 8 thousands of separate body fragments. But international mythology has its own laws, so the figure introduced into the public consciousness must be proved at any cost. And because the court calls "8 thousand" by the results of the process, which was proved only two thousand. As for the claim that the fact of genocide was also established by the International Court of Justice of the United Nations - this is still a stretch. The fact is that in the case of “Bosnia and Herzegovina v. Serbia and Montenegro”, the UN-ICC only referred to the already mentioned ICTY decision as true. So all these allegations of genocide, allegedly set by two international courts, are big lies.

The laws of international myth-making, however, require constant effort. So, it should be noted a speech at a meeting of the Security Council of the UN High Commissioner for Human Rights Zaid Raad Al-Hussein: “On July 11 at night, Ratko Mladic began to turn this military victory into a crime of such magnitude that no one in Europe has seen since 1945. It seems that it was on that night that he decided to exterminate the 1000 boys and men gathered at Potocari. Mass executions began on July 13 .... "Why such tales from a solid UN employee? The answer becomes clear a bit later: “Understanding that the United Nations doesn’t see them, the killers continued their work until they killed more 8000 boys and men who did not take part in the hostilities. The UN Forces had an awkward mandate at the beginning, it was absolutely it is clear, as well as the fact that the two cultures, the UN and NATO, worked together in a mess. These boys and men could well live if the head of the UN force in Sarajevo accepted the request for direct air support or if the United Nations launched air strikes on June 3 when the Echo observation post was attacked; or 6 July, when the attack on Srebrenica began; or July 8; or, if Lieutenant General Janvier gave the order to put them on July 10 or July July early in the morning. ” (11) Well, now everything is clear. It is for this that international myth-making is necessary in order to whitewash itself from its own bloody crimes! We had to bomb these Serbs before! And what the hell is the indecisive UN! NATO is the one who ultimately saved all the surviving boys whom General Mladić didn’t have time to destroy ...

Explaining Russia's position, Vitaly Churkin noted that when the delegation of Bosnia and Herzegovina first appealed to us about the need to celebrate the 20 anniversary of the tragedy in Srebrenica, we agreed that this should be done with dignity. However, the implementation of this initiative has shown that it is going in a completely different direction. The draft resolution, introduced by the British delegation, “turned out to be non-constructive, confrontational and politically motivated, contained significant distortions, as a result of which only one people were blamed for the past.” V. Churkin noted that this approach, when only one of the war crimes is singled out, is “absolutely wrongful and fraught with the intensification of the already deep division of the Bosnian society”. “From the very beginning of the discussion, we sought to give the document a balanced character. We have proposed an alternative option based on the logic of the future. However, our key provisions were essentially ignored. ”

Britain advertised its project in advance, but it caused an extremely painful reaction both in Bosnia and Herzegovina and beyond. Diametrically opposed appeals from various representatives of multi-ethnic and multi-religious Bosnian society only strengthened Russia in the opinion that such a document, if adopted, would not serve the cause of peace in the Balkans, but would even more disperse old wounds, condemning this region to conserve tensions and postponing the prospects for sustainable peace. This reaction, in particular, was reflected in the letters that were sent to the Security Council by the Serbian member of the Presidency of Bosnia and Herzegovina, the President of the Republika Srpska, as well as the President and the Minister for Foreign Affairs of Serbia. This topic has become the subject of acute controversy in Bosnia and Herzegovina - so much so that we can speak about the real threat of undermining the stability of the country, about the loss of the hard-won achievements in implementing the Dayton Agreement.

In the absence of consensus on this issue in Bosnia and Herzegovina itself (as you know, the BiH parliament could not reach a common opinion, as well as members of the Presidency in Bosnia), Russia considered that the adoption of the draft by the Security Council “would be an absolutely counterproductive step and would aggravate the situation in the region ". Russia invited activist countries not to submit the draft to the vote, the Chinese delegation also requested the same, but without success.

The veto of Russia was greeted with mock rage. It was necessary to finish the game in advance prepared by the script, outraged defenders of men and boys. The theatrical style laid down by the UN High Commissioner for Human Rights was picked up by US representative S. Power: “When in July 1995, the Bosnian Serbs entered Srebrenica, I, then 24-year-old journalist, lived in Sarajevo. It was there that a few days after the seizure of the safe area in Srebrenica, I heard from a colleague about incoming reports of mass executions. “No!” - only I could say. “No!” ... When I learned that Russia plans to veto the draft resolution of the Security Council in memory of the genocide in Srebrenica, I confess, I reacted in a similar way: “No!” I said. “No!” What could motivate Russia to prevent the recognition of the genocide in Srebrenica? Today's vote mattered. It was of great importance for the families of the victims of the Srebrenica genocide. The Russian veto causes deep pain to these families and is another spot on the Council’s track record. ”

Thus, the submission of the draft resolution “on Srebrenica” was in fact a provocation against Russia. Somehow, American and British human rights defenders both forgotten the recent 40 anniversary of the end of the Vietnam War, and the 10 anniversary of the unlawful invasion of the United States and Britain into Iraq. There were no memorable draft resolutions for the millions who died in these wars ...

As V. Churkin correctly noted, “the problem is that your humanism turns on and off depending on the political consistency and this completely undermines your credibility in your statements and actions” (3).