A threat or not a threat?

July 14 2015
53
The views of the American establishment on Russia diverged sharply. Some politicians believe that Russia represents the main threat or one of the main threats for the United States, others argue with them and call for a thought back. And even require to become "much smarter." Interestingly, among the latter, Hillary Clinton was discovered - the former Gosdepovskaya lady, rushing into the presidency. 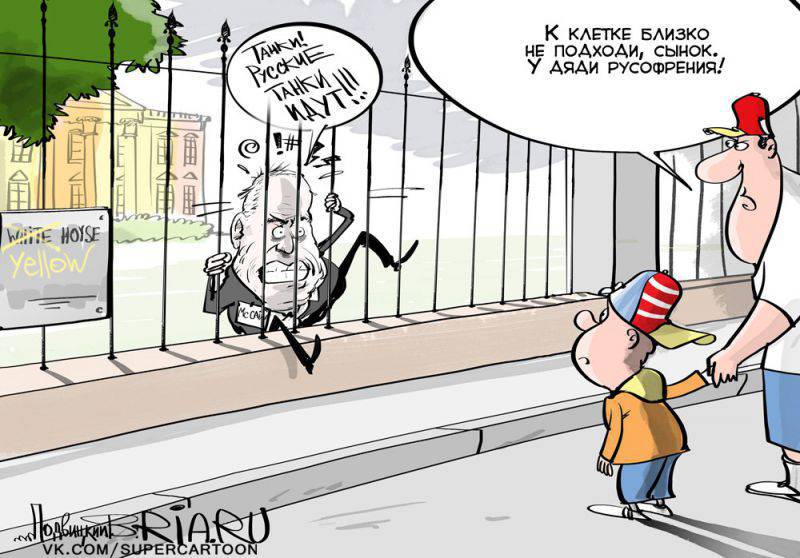 9 July became aware of the almost scandalous statement by the head of the US Air Force Deborah James. According to the newspaper Kommersant, she said she considers Russia the biggest threat to US national security. According to her, Washington should increase its military presence in Europe.

“I rate Russia as the biggest threat,” said James in an interview with Reuters. Europe faces migration and economic difficulties, but the commitments of NATO countries must remain a clear priority.

How is the radio broadcast "Freedom"Deborah James, the head of the United States Air Force, said that the United States would continue to respond to Moscow’s "disturbing" actions by sending F-16 fighter squadrons to patrol the airspace of Eastern European member countries of NATO.

“Now is not the time to demonstrate in any form a lack of determination to act in front of Russian stocks,” said James.

Svoboda reminds us that the US Air Force Secretary spoke of this after visiting several European countries that are members of NATO, including Poland. James expressed disappointment that only 4 from 28 of the NATO participating states allocate 2% of budget expenditures for defensive needs.

In addition to James, four-star General Joseph Dunford reported on the Russian “threat”.

July 9 "BBC" conveyed the words of the US Marine Corps Commander, Joseph Dunford. This man called Russia the biggest threat to the United States.

Barack Obama, specifies the "BBC", proposed the candidacy of Dunford for the post of chairman of the committee of chiefs of staff of the US armed forces.

“Russia represents the greatest threat to national security,” this general said at the hearing of the Senate Committee. Russia's behavior in the international arena is worrying: “If you want to talk about a country that would pose an existential threat to the United States, then I would point to Russia. And if you look at her behavior, it is at least alarming. ”

As for the Ukrainian crisis, the general is in favor of supplying Kiev with a lethal weapons: “Frankly speaking, without such support they will not be able to defend themselves against Russian aggression.”

During the next briefing, US State Department spokesman John Kirby, reports "RT", declined to comment on US statements about the "threat."

Mr Kirby did not answer the question of the correspondent Gayane Chichakian about whether Russia poses the greatest threat to US security. “I will not comment on the words of high-ranking representatives of the Ministry of Defense. I think I formulated very clearly: I think everyone in the US government shares the same concerns about the security challenges that Russia presents, in particular, in Europe, ”the newspaper quotes Kirby. "Sight".

“But they called it not just a threat or a challenge, but“ the biggest threat. ” Doesn't it seem to you that when some words come from this rostrum, and from the mouths of high-ranking military officials, others, is this somewhat confusing? ”The journalist asked.

“I have no answer to your question,” said the puzzled Kirby.

US Secretary of Defense Ashton Carter also spoke out against Moscow. This politician called Russia a “case” for NATO.

“You know, a year ago, the NATO alliance wondered what to do after Afghanistan. And now, not one thing has appeared, but two things at once: Putin's Russia and ISIS, ”he is quoted as saying. "First channel".

10 July became aware of the sharp disagreement between the White House and the State Department with the statements of Dunford and James.

The White House also objected to the "applicants." Barack Obama’s team has never concluded that Russia represents a major threat to US national security. This was stated by the press secretary of the White House, Josh Ernest, whose words convey "Lenta.ru". According to the latter, he "is not aware of the fact that the presidential team on national security issues in the course of any study came to this conclusion."

Curiously, the aforementioned Dunford made statements uncomfortable for the White House before. During the command of foreign forces in Afghanistan (2012-2014), the general accused Obama of inciting hatred against ... NATO soldiers.

Surprisingly, we add from ourselves that it was this General Obama who nominated for the post of chairman of the committee of chiefs of staff of the US armed forces. One might think that Obama is not alien to objectivity and self-criticism. However, such an assumption could not stand the simplest criticism: the American president almost in every speech he inserts expressions about “exclusivity” and “indispensability” and boasts of his achievements in economics and social policy. In fact, the White House and the State Department, in general, agree with the statements of James and Dunford - after all, before Obama himself placed Russia among the threats of the United States alongside the "Islamic State".

Let's refresh the memory. In September 2014, speaking at the 69 session of the UN General Assembly, B. H. Obama announced three major world threats: the spread of Ebola fever; Russian aggression in Europe; the activities of the "Islamic State" in Iraq and Syria. “While we are here,” the president said, “the Ebola outbreak affects health systems in West Africa and threatens to spread quickly beyond its borders.” Russia's aggression in Europe reminds of the days when big nations threatened small ones in pursuit of their own territorial ambitions. The brutality of terrorists in Syria and Iraq forces us to look into the heart of darkness. ”

A month later, the American president re-announced the list of threats. Russia was again one of the points. Speaking before the Senate elections in Chicago on October 10, Barack Obama repeated his thesis: “People are worried. They worry for three reasons, ”Mr. Obama told the voters. The difference in the list of threats that the White House host listed was only ordinal: first, Obama stopped fighting the Islamic State, then told about Ebola. Under Obama number three, Russian “aggressors” passed: “The situation in Ukraine and the Russian aggression are what people care about.”

In June, the Obama thesis 2015 was confirmed by the “voice of Europe” - Angela Merkel. In the Canadian newspaper “The Globe and Mail” published her article on the G7 summit. Frau Chancellor listed the world threats in the text. Their list is like two peas in a pod like a list of the threats that Mr. Obama voiced last year. The first threat was called a certain political subject who, after 25 years after the end of the Cold War, committed the “annexation of the Crimea”. Threat number two is the "spread of the Ebola virus." In third place was the activity in the Middle East of the "Islamic terrorist organization", which strives to "establish the so-called caliphate on the territory of the two countries."

As we think, wanting to please the dark-skinned boss, Frau Merkel transferred the Russians to the first place. Apparently, Moscow is scaring the German Chancellor much more than a bloodthirsty Islamic State.

And on the topic of "threat". Russia is quite officially in the list of military threats to Washington. Recall, recently on the Pentagon website there was a press release on the new national military strategy of the United States. The adopted strategy, in the development of which the chairman of the Joint Chiefs of Staff of the United States, Martin Dempsey, participated, envisages Washington’s struggle with “revisionist states”. Russia and the Islamic State are clearly spelled out on the list of enemies. According to the adopted document, the American army should be ready to fight “revisionist states”, such as Russia, because they violate international norms.

Apparently, due to the growing mutual accusations between the US and Russia, Mr. Obama decided to soften the rhetoric and gave the secretaries the command to pull up the brave warriors.

Obama’s “reverse” was rightly interpreted by those people in the United States who want to put together a political capitalist - and it doesn’t matter whether they have to speak “against” Russia, or “for” Russia.

Known for her unpredictability, Hillary Clinton, a candidate for the presidency of the United States, a month ago listed the countries that emanate threats to Washington. Clinton’s list includes Russia, North Korea and Iran. Russia was in the first place! "No other country on Earth has a better position to flourish in the 21st century, no other country is better suited to repelling traditional threats from such states as Russia, North Korea and Iran," - quotes her "NTV".

However, now the ex-state secretary declares his readiness to pursue as the president of the United States a “smarter policy” towards Russia - unless, of course, she (Hillary) is elected president.

According to Sergey Strokan (Kommersant), H. Clinton's last statement points to a shift in emphasis in the position of leader of the Democrats. Experts interviewed by the correspondent suggest that if Clinton came to power, the lack of dialogue between the US and Russia would be replaced by “limited interaction with elements of deterrence”.

“We have to be much smarter when we deal with Putin and when we deal with his ambitions,” Clinton quotes. "Lenta.ru". “He’s not a simple person ... But I don’t think there is any alternative to constant interaction.”

Such statements, we note in conclusion, suggest the unwillingness of the current American administration to aggravate the already complex relations with Russia. Moreover, the future administration (if only H. Clinton manages to get to the throne) also promises not to spoil relations with Russia. True, Hillary is completely unpredictable, and tomorrow may forget what she said yesterday. In this case, Russia will again fall into the list of those countries whose "traditional threats" of the United States intend to "repel".

One thing is clear: the current owner of the White House intends to sit out the rest of the year and a half on the throne relatively peacefully and calmly.