July 13 2015
73
Republican senator Marco Rubio, who met for president, called Vladimir V. Putin a "criminal element" and a "dangerous person" and promised potential voters that if he (Rubio) becomes president, the United States will remain "the most powerful military force" on the planet. On the topic of "dangerous Putin" also spoke a former high-ranking CIA official Robert Dannenberg. According to him, Putin can apply tactical nuclear weapon in Europe. Western analysts agreed that the Russian authorities "darkened consciousness", and also offered to award the late B. Nemtsov with the Sakharov Prize.

The 44-year-old senator told the audience that he considered Putin to be a "dangerous man." In his opinion, Americans should not have any illusions about the master of the Kremlin.

Probably, it was a kind of response to the presidential candidate from the same Republican party, Donald Trump, who previously said that he could easily make friends with Putin and bring the degree of friendship to a “very, very good” relationship.

Further, Mr. Rubio told how his parents managed to realize the “American dream” in Las Vegas at one time, and noticed that he owes it to the United States. And when he becomes president, he will pay the debt.

Mr. Rubio was applauded by retired officers, delighted when the senator swore that as president, he would do everything to ensure that the United States "remains the most powerful military force the world has ever known." In his reign, the United States will successfully compete with other countries investing billions of dollars in the creation of new military equipment.

On the topic of "dangerous Putin" spoke another person from the United States, a former senior CIA official Robert Dannenberg. According to him, Putin can use tactical nuclear weapons. 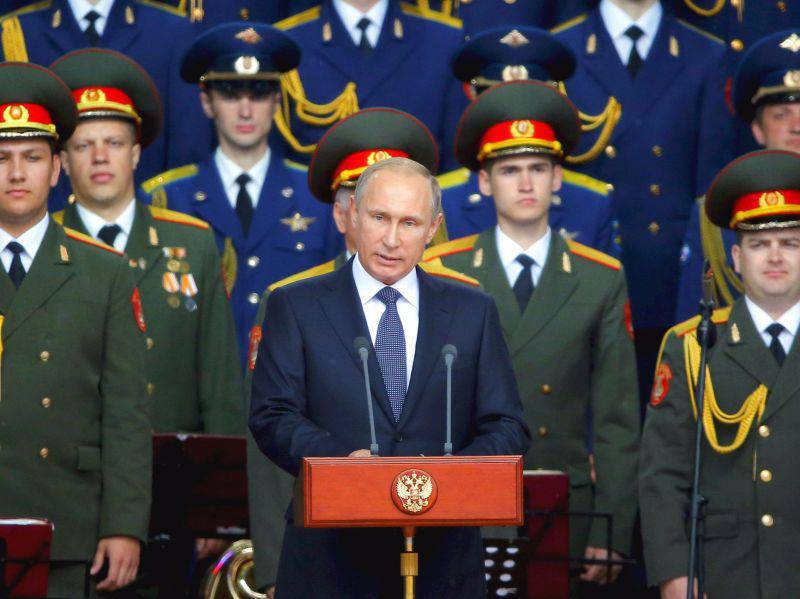 He who is afraid of the West. Photo: Maxim Shemetov / "Reuters"

Russian President Vladimir Putin is ready to use tactical nuclear weapons in Europe. Putin’s goal is to stop the expansion of NATO. So says the former head of one of the CIA bureau, writes "Business Insider".

Robert Dannenberg once headed the global division of Central Eurasia. He now works as head of global security at Goldman Sachs. According to the publication, the recent statements of the former CIA officer are shocking.

Dannenberg believes that the Kremlin’s current military agenda includes the possibility of using nuclear weapons in Europe. Putin’s position here is radically different from what is known from the newest stories. Putin signed the revised nuclear doctrine of Russia in December last year, and now has the right to use tactical nuclear weapons in Europe. Moreover, Putin recently announced the expansion of Russia's nuclear arsenal. Dannenberg also said that he had recently spoken with a number of retired high-ranking officers belonging to the Russian military intelligence, and they said that the ideas about nuclear weapons were “sanctioned directly by Putin.”

Dannenberg noted that the current time is "extremely dangerous." According to him, the Kremlin does not believe that the use of nuclear weapons is desirable, but is quite ready to use them if necessary. The reason may be the "NATO invasion." “You can imagine,” remarked the former tseerushnik, “how such a statement had an effect on Washington and London.”

Last month, Putin said, reminds the publication that Russia will arm itself with additional intercontinental ballistic missiles, a total of more than forty units. He also said earlier, the newspaper says, that “the government is ready for a nuclear confrontation” over the Crimea.

Редакция "The Wall Street Journal" I am sure that the Russian government has “darkened” the consciousness.

The Federation Council of Russia, the newspaper writes, “pocket” upper chamber of President Putin, has instructed the government to investigate the activities of a dozen foreign organizations related to the sphere of civil society. The purpose of the investigation is to determine whether they should be included in the patriotic stop list.

The editors of the journal consider such an investigation as the “last chapter” in the “confusion of the Russian consciousness”.

The first (May) stop list, recalls the publication, included a number of “undesirable foreign groups” of American origin: “Freedom House”, “National Endowment for Democracy”, International Republican Institute, National Democratic Institute for International Affairs and some others.

This might seem like a “flash of anti-Americanism,” but the real goal, the editorial staff considers, is “internal dissent”. Today, “domestic activists” who receive funding from “unwanted groups,” the article states, can receive a fine of 10000 $ and up to six years in prison.

In such a “repressive environment”, “honest views” are unlikely to emerge, the publication believes. And so the Russians are fleeing from Russia. According to the migration data, “Russians vote with their feet.” From January to August 2014, 204.000 citizens emigrated from the country (according to official data). The capital outflow in 2014 was 151.000.000.000 $. This is a record, and this figure is three times higher than the 2013 value of the year.

The magazine believes that Putin’s “attack” on “civil liberties” will not be the last. According to the editors, the current "attack" on freedom is a new threat to the "authoritarian" Putin "democratic world order."

Apparently, wanting to preserve the peeling and cracked facade of this very "democratic world order", in the West they offered to write out the dead Sakharov Prize to the dead Boris Nemtsov.

“The prize will go to the Boris Nemtsov Foundation, created by his daughter, whose goal is to support Russian civil society in the struggle for a peaceful and democratic state,” said Paet. According to him, “by awarding the prize we can show that we do not forget the heritage of Nemtsov and can help the local small civil society there.”

The cares of “The Wall Street Journal” about the welfare of Russia, about freedom and democracy, about those people who leave the country, and especially about the money that floats to the West, look touching. Worry, really, not worth it. Urmas Paet and his colleagues rated civil society in Russia as “small”. And this means that few will flee the country. Who exactly will run away, in the West know. And experts in the West grieve just because those who run away will leave big gaps in thinned columns of supporters of the “democratization” of Russia.

Another question: should the “freedom-lovers” flee to Paris and London when Putin was going to throw Europe with nuclear bombs?