July 13 2015
94
By the time the German battlefield appeared tanks The Tiger and Panther, an ordinary thirty-four armed with a 76 mm cannon, ceased to be a formidable vehicle for Panzerwaffe tankers. The T-34-76 gun couldn’t hit the latest German tanks in the forehead, and the Tiger could do something only when firing at sides from minimum distances. And the 45 mm armor ceased to protect the crew from the latest German tank guns, not to mention the much better optics installed on German tanks. But even so, the Soviet tankers found the opportunity to beat the enemy.

One example of a successful T-34 battle against formidable "Tigers" is the battle that took place on 25 in January of 1944 in the framework of the Korsun-Shevchenko operation. In this battle, the tank T-34-76, which was managed by guards lieutenant colonel Alexander Fedorovich Burda, engaged the enemy’s 12 Tigers. During the battle, the thirty-four was destroyed, and Burda himself was killed, but his dedication allowed him to remove the headquarters of the tank brigade, which he commanded. At the same time, the X-NUMX-mm cannon of the T-76 tank could not penetrate the Tiger’s frontal armor, while the German tank was also distinguished by its most powerful 34-mm gun, which made it possible to hit the T-88 tank from a distance of several kilometers.

Alexander Fedorovich Burda - Soviet officer, lieutenant colonel of the guards, was one of the famous Soviet tank aces. He was born 12 April 1911, in the small village of Rovenki, today it is a city in the territory of the Luhansk region in a mining family. He was the eldest son in a large family of 9 children. Moreover, his father died during the Civil War. After graduating from 6 school classes, he begins his working career. Then hardly anyone could say that this shepherd, who later learned to be an electrician, would become a famous tankman and Hero of the Soviet Union. Worked Alexander Burda and a mechanic at the mine number XXUMX in Rovenky. 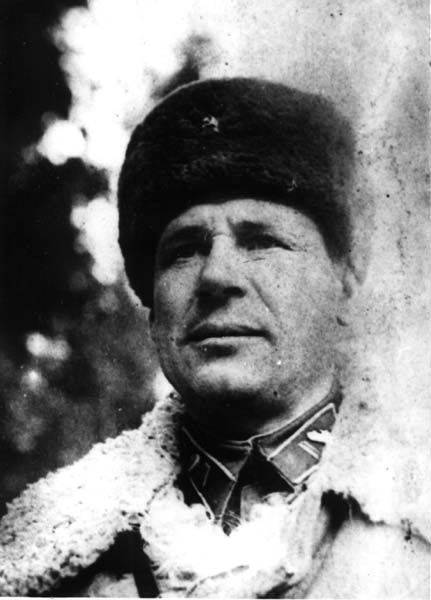 In 1932, Alexander was drafted into the army, where he served in the 5 heavy tank brigade, armed with T-35 five-turreted heavy tanks. After graduating from the regimental school in 1932, Alexander Burda received the specialty of the machine gunner of the third tower. So begins his career as a successful Soviet tanker. Over time, he was appointed commander of the central tower, and also completed special courses conducted by engineers of the heavy tank manufacturer T-35.

In the future, his career was inextricably linked with the Red Army and tank forces. In 1936, Alexander Burda graduated from Kharkov in the training of middle commanders, after graduating from these courses, he became a platoon commander and served as part of the training tank company B. A. Shalimov. In 1939, he became a listener for car and armored staff improvement courses located in the city of Saratov. He managed to finish these courses directly on the eve of the Great Patriotic War, having passed all the subjects as “excellent”. In a fairly short time, the former villager was able to thoroughly master and study the tank case. Even then, his career success was noted, in particular, he was awarded the badge "Excellent Red Army."

Burda met the Great Patriotic War at the western borders of the USSR in the city of Stanislav, in the 15 Panzer Division. This division led its history from the 5 heavy tank brigade, in which Alexander Burda began his military career. As part of the 15 Tank Division, he commanded a company of medium-sized T-28 tanks. In the first days of the war, Alexander Burda receives a baptism of fire. Covering the withdrawal of parts of the division, in the Vinnitsa region he managed to defeat one of the German tank divisions. In these battles, the gunner in the T-28 tank of Burda was another in the future, the famous Soviet tankman al Storozhenko V. Ya. 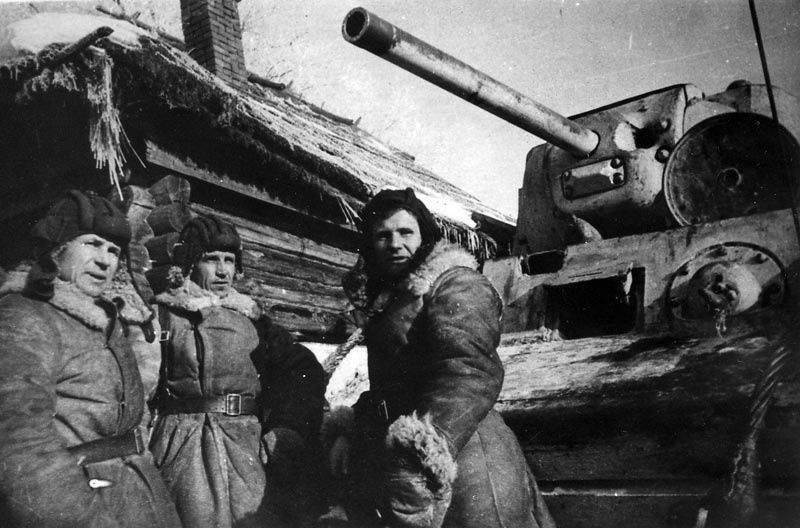 In the summer battles of 1941, the 15-I tank division lost most of its materiel and was relegated to the rear for re-formation. Already in the rear, its personnel were included in the 4-th separate tank brigade of Colonel Katukov. By the time the commander of a tank company Alexander Burda appeared in this unit, 8 had already destroyed enemy tanks, as well as 4 wheeled vehicles. As part of the 4 Tank Brigade, Burda took an active part in defensive battles near Moscow in the autumn of 1941. He was noted in the battles of Orel and Mtsensk, as well as on the Volokolamsk highway. In particular, under the Eagle 5 of October 1941 of the year, together with the commander of the 1 tank battalion V. Gusev and the infantry assault troops, a division of T-34 tanks Alexander Burda destroyed the German convoy, recording 10 medium and light tanks, 2 tractor with XTX guns, XNUM vehicles with infantry and up to the Nazis 5. The documents captured at the same time helped to establish that the German 90 motorized corps, consisting of two tank and one motorized divisions, was operating in front of the front of the 4 tank tank brigade.

In the summer of 1942, Alexander Burda commanded a tank battalion in the 1 Guards Tank Brigade, which fought on the Bryansk Front. At the same time he was seriously wounded, surgeons were able to save his eyesight and returned to the system. Since November 1942, he served as commander of a tank regiment as part of the 3 Guards Mechanized Corps, who fought on the Kalinin front. Since June, 1943, he served as commander of the 49-th tank brigade (from October 64-I Guards Tank Brigade) on the Voronezh and 1-th Ukrainian front. He took part in the battle of Kursk, where he was wounded a second time, in the battle for the Dnieper and the Zhytomyr-Berdychesky offensive operation.

Oleksandr Burda spent his last fight on 25 on January 1944 of the year on the territory of the Cherkassy region of Ukraine. The Burda Brigade found itself in a semi-circle as a result of the active operations of the German 16 Panzer Division, which was one of the most powerful and manned German units on that sector of the front. At some point in the battle, 12 heavy tanks "Tiger" of the enemy reached the command post of the brigade, creating an immediate threat of the destruction of the headquarters. Kombrig, who at that moment had only one T-34-76 tank at hand, decided to take the fight, he single-handedly attacked enemy tanks that had broken through to headquarters, while he managed to destroy two of them. 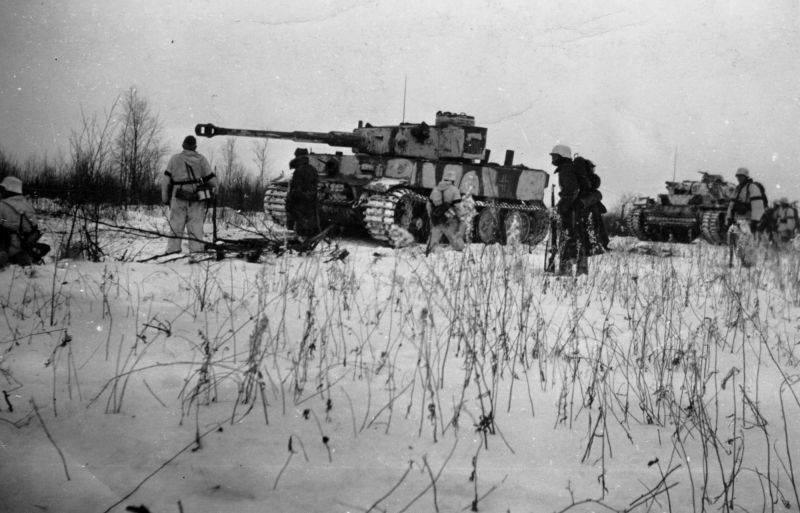 At this time, the brigade headquarters retreated on wheeled vehicles literally through the fields. Staff members managed to get out of the strike and save valuable documents. However, the T-34 tank of Alexander Burda was hit, several shells hit the car at once. Kombrig was seriously wounded in the stomach by fragments of tank armor. They managed to pull him out of the damaged car and even tried to evacuate him to the hospital, but Burda did not reach the physically wounded man. 24 April 1944 of the Guard Lieutenant Colonel Alexander Fedorovich Burde was posthumously awarded the honorary title of Hero of the Soviet Union. At the time of the death of the tank ace he had 30 padded German tanks. The name of the tanker was named a street in his native city Rovenki, there are also streets of “Hero of Burda” in Ivano-Frankivsk and Chernivtsi. In addition, the name of the tanker was named one of the regional centers of Ukraine.

In the opinion of fellow militiaman Burda, reserve lieutenant colonel B. V. Kukushkin, the feat of the commander 25 in January 1944 of the year was that he: 1) being disciplined and seasoned, did not change the location of the command post without permission of the senior authorities, despite the fact that the situation at the front was very heavy. 2) with its calmness and courage instilled in officers and soldiers confidence that everything will end well, thus preventing confusion in the most difficult moment. 3) Despite the greatest danger, I entered a tank battle with the superior forces of the Germans, distracting the enemy’s fire. This ensured that the brigade headquarters reached a new position, rescued documents and part flags, albeit at the cost of its own life. 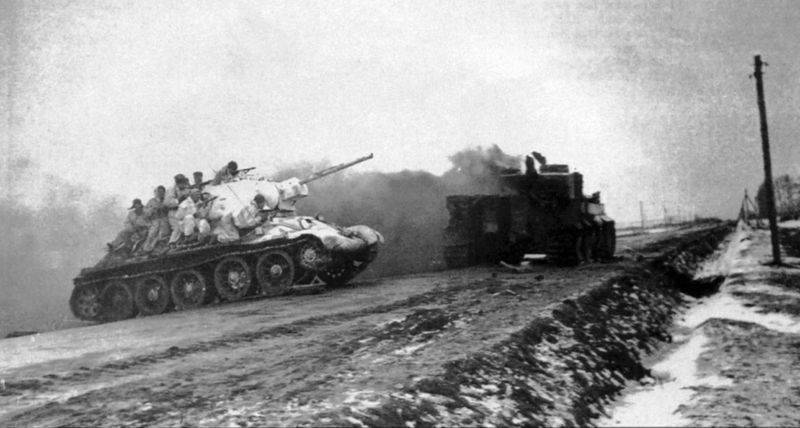