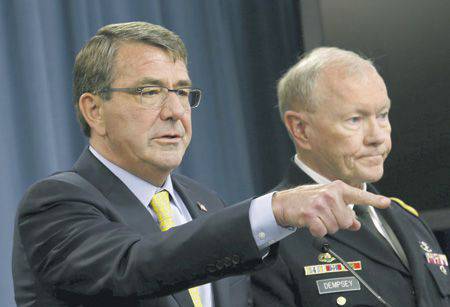 The White House continues to pursue a policy of tough confrontation with Russia and adjust its strategic guidelines. 2 July The Pentagon introduced to the American public a new edition of the US National Military Strategy (NAF). The last time such a document, in which, in the most general terms, without any details, is a general assessment of the situation in the world, threats to US national security, as well as formulates the main tasks of the Armed Forces and defines general approaches to solving them, published in 2011 . The main thesis is that the US Armed Forces in all aspects are superior to their likely adversaries, but without the necessary funding they may not be able to protect their country and its national interests in the present and in the foreseeable future.

The preface to military strategies is usually written by generals who, at the time of their publication, head the Joint Chiefs of Staff Committee (JCSS). And this time, four-star general Martin Dempsey presented the new strategy to his subordinates and the American public. He noted that the security situation in the world today is the most unpredictable in all 40 years of his service. Dempsey stressed that since the publication of the penultimate edition of the Pentagon’s military strategy, the situation in the world has destabilized substantially, and the US military superiority continues to steadily decline.

Today, America’s security is simultaneously exposed to a multitude of threats emanating from its traditional opponents, interregional state associations and non-state groups. All these structures are trying to take advantage of the benefits that the intensive development of technology. According to the general, in the future, armed conflicts will develop in a much shorter time, last much longer, and their technical component will be much more complicated than weapons and military equipment used in modern theaters. All of this can negatively affect America’s security.

Dempsey writes that the new version of the NAF sets out general principles for using the Armed Forces to ensure security and protect America’s national interests. The general says that the United States must be able to quickly and adequately respond to any new challenges, while maintaining its superiority in confronting traditional threats. This should be ensured by the effective interaction of military structures with other instruments of state power, as well as with allies and partners. The strategy points out the need to ensure the possibility of deploying the US military on a global scale and preserving the existing system of military alliances. It once again focuses the attention of the leaders of the Ministry of Defense on the solution of such an important task as the formation of a highly trained, committed and ready-to-follow-up leadership of the Armed Forces.

As noted by the chairman of the military school of ministers, the use of the Armed Forces against states that directly threaten the United States differs significantly from their use in the fight against non-state entities. Such confrontations are likely to result in long military campaigns. To contain the escalation of such conflicts will be much more difficult. Their low predictability in reducing financial resources and the size of the Armed Forces requires a substantial revision of the global concepts of the military department and an adjustment of operational and strategic plans.

In conclusion to his preface, Dempsey notes that the new NAF emphasizes “the need to confront revisionist states” challenging the norms of international order and law, as well as “violent extremist organizations” that threaten global and regional security. To contain, counter, and, if necessary, defeat, the Armed Forces of the countries of potential opponents, the United States actively interacts with its allies and partners. At the same time, America is taking and will take all necessary measures to create coalition formations designed to counter, neutralize and destroy armed extremist militant groups.

The authors of the strategy consider the current situation in the world to be very complex and rapidly changing. In their opinion, the change in the international situation is determined by the processes of globalization, the spread of technology and demographic shifts.

The drafters of the paper argue that globalization affects all aspects of human activity. Today, there is an extremely rapid movement of people, goods and information across state borders. The volumes of these flows are colossal. All these processes are catalysts for the economic development of the countries of the world. But they also lead to increased tensions in society, initiate a struggle for resources and exacerbate political instability.

The spread of new technologies leads to the development of the global information space. This allows people from different countries of the world to receive and process significant amounts of data, to develop more effectively and engage in creative activities, to exchange information and knowledge very actively, and also to group into interest groups much faster than it has been until now. Currently, individuals and organizations have access to vast amounts of data. This allows them to create target formations as soon as possible and act on the basis of the information received. In some cases, the result of such associations is increased violence. The proliferation of technologies for military use, the authors of the document indicate, lead to a reduction in the advantages that the USA has had for many years in, for example, areas such as providing early warning of a missile attack and delivering high-precision strikes.

But in Europe and Northern Asia, on the contrary, there is a reduction in the number and aging of the population. Millions of people around the world looking for work are moving from the countryside to the cities. There, they are beginning to acutely experience a cultural difference with the urban population, to feel social alienation and to face various diseases.

Most states, according to the NAF, led by the United States, their allies and partners, support generally recognized institutional structures and procedural norms designed to ensure conflict prevention, respect for state sovereignty and universally recognized human rights. However, some countries are trying to reconsider key priorities of international order and law and are acting in the direction of endangering US interests.

As noted in the NAF, Russia contributes to some areas of ensuring international security, including the fight against drugs and terrorism. However, she has many times demonstrated disrespect for the sovereignty of her neighbors and a willingness to use military force to achieve her goals. Russia, according to the creators of the NAF, by its military actions directly and indirectly undermines regional security through its henchmen and supporters. These actions are in violation of numerous agreements signed by the Kremlin, in which he pledged to act in accordance with the norms of international law, such as the UN Charter, the Helsinki Accords, the NATO-Russia Founding Act, the Budapest Memorandum and the Treaty on the Elimination of Medium and Short-Range Missiles .

The Pentagon’s strategy speaks of other opponents of America. Iran is designated in it as a state that poses a strategic challenge to the world community. Tehran, despite numerous resolutions of the UN Security Council demanding to close its military nuclear program, is actively creating atomic weapon and means of delivery. American strategists also consider Iran to be a sponsor of terrorism, which leads to destabilization of internal stability in many countries. By his actions, he condemns countless people to the suffering and at the same time deprives the Iranian people of their hopes for a safe and prosperous future.

North Korea’s efforts to build nuclear weapons and ballistic missiles also run counter to the repeated demands of the world community to stop implementing these programs. Such actions of the DPRK are a direct threat to its neighbors, especially South Korea and Japan. In the future, the NAF authors announce, such actions will threaten continental America. In addition, North Korea constantly carries out large-scale attacks on American information systems, causing significant damage to federal structures and private corporations.

The Pentagon strategists declare that they positively appreciate the strengthening of the PRC, and call on Beijing to become a partner in strengthening international security. However, China’s actions lead to increased tensions in the Asia-Pacific region. For example, its claims to almost the entire water area of ​​the South China Sea contradict the norms of international law. The world community continues to call on the PRC to resolve such issues in close cooperation with other countries, without threats and the use of military force. However, Beijing not only does not follow such appeals, but, on the contrary, is actively pursuing large-scale measures to expand and develop the coastal zones of the South China Sea Basin. Its activities in this region are aimed at creating the conditions for the deployment of its Armed Forces along important international sea routes.

The authors of the document say that, in the prevailing opinion, “none of these countries is seeking direct military confrontation with the United States” or with their allies. “Nevertheless, each of them represents a serious threat to world security, against which the international community collectively fights, pursuing a common policy, exchanging information and coordinating its actions,” the doctrine states.

“As part of these efforts, we still intend to cooperate with all countries, contributing to the sharing of our moral values, promoting transparency in relations and reducing the likelihood of possible miscalculations in the development of interaction. Accordingly, we will continue to make efforts to establish effective military relations with China in the military sphere and are ready, as before, to cooperate with Russia in matters of mutual interest, while urging both countries to resolve the contradictions in a peaceful manner in accordance with international law. ” - the authors of the doctrine stated.

Press Secretary of the President of the Russian Federation Dmitry Peskov, commenting on the strategic document of the Pentagon, expressed deep regret that in the US position calculated for the medium and long term there are real statements about the hostility of Russia and America. In his opinion, the appearance in the American military doctrine of such formulations indicates a confrontational mood, devoid of any objectivity in relation to Russia.

“This, of course, is hardly conducive to attempts to steer our bilateral relations towards normalization, which is so necessary for the joint struggle against the existing challenges that the countries alone cannot find an answer to,” he added. The spokesman noted that such challenges include, in particular, the activities of the Islamic State group and other manifestations of terrorism and extremism on a global scale.

Answering the question of journalists about the light in which the United States can be reflected in a similar document of the Russian Federation, which is currently being prepared, Peskov said that it is too early to talk about it. “Let's wait for the appearance of this document. Of course, all the threats to the national security of Russia are taken into account, they are being worked out and appropriate countermeasures are envisaged, ”the presidential press secretary said.

At the enlarged Security Council meeting in the Kremlin, which discussed a range of issues related to ensuring security and national interests of Russia in the context of sanctions by a number of states, the President of Russia said: “Recent events show that we expect a change in the unfriendly course of some of our geopolitical Opponents in the foreseeable future is not necessary. " He also noted that Russia needs to respond appropriately to all actions of the West and "take additional systemic measures in all key areas."