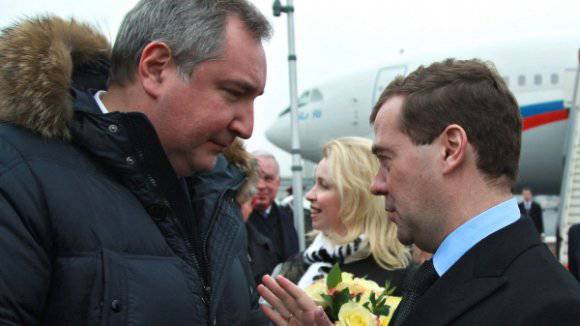 Dmitry Medvedev instructed Russia's envoy to NATO to take up defense issues. He is already heading for a tour of the defense industry enterprises.


October 21 Dmitry Rogozin will begin a large-scale inspection tour of Russian defense enterprises. Together with the head of the General Staff Nikolai Makarov, he will visit the plant for the production of small weapons. As Rogozin himself told Izvestia, the plans for the beginning of November include a joint trip with the head of the presidential administration, Sergei Naryshkin, to the city of Luga, Leningrad Region. There the tactical exercises of the brigade, fully equipped with the Iskander operational-tactical missile system, began.

In addition, Russia's permanent representative to NATO intends to visit the headquarters of a military unit in Orenburg, a number of closed territorial entities in the Moscow region, and an aircraft building association in Voronezh. Rogozin's increased activity in the military-technical field is associated with his new mission.

- Within the Public Committee, which works under the auspices of the president, a commission on defense and defense industry was created. And I will head it, if you can talk like that about some posts in the social structure, ”Rogozin told Izvestia.

According to the Permanent Representative to NATO, throughout this year, he repeatedly discussed with Dmitry Medvedev the problems of the defense complex.

“My acquaintance with how things are being done in this area in our country and what armament programs we have shows that, of course, technical modernization of the entire defense industry is required,” complains Rogozin.

According to him, inside the country it should be an urgent modernization of the industry, attracting foreign capital. Among other plans, Dmitry Rogozin - "a huge job related to personnel." The next task is to “identify a circle of interested representatives of large Russian business” who are ready to “invest in the defense industry, in the creation of new types of weapons and military equipment”.

Experience in NATO, says Rogozin, it is very useful.

“We can learn first of all how horizontal relations are built up between an enterprise, a customer, a manufacturer, how investments are made in the defense industry,” he explains.

The Kremlin says that Rogozin will have no special powers - only deliberative functions. However, in the General Staff, his new assignment was wary.

“The military has even more ambiguous attitude to the figure of Rogozin than to the figure of the current Minister of Defense Anatoly Serdyukov,” a senior General Staff General told Izvestia.

- If he was a military man and would know from the inside military life, military affairs, there would be no questions. And so we have not yet seen what he has done for the army so special, ”added another General Staff officer.

But there are those who are rather positive about Rogozin’s future activities.

- It was high time for a state-wide audit of all enterprises of the military-industrial complex. Dmitry Rogozin saw how the defense industry works in the West, and understands that leadership in the production of military products is beneficial to the state, - said Colonel-General Yuri Bukreev, the former head of the Main Directorate of Land Forces of the Russian Armed Forces.

Earlier, the sources of Izvestia, surrounded by Rogozin, argued that one of the conditions for the return of NATO Permanent Representative from Brussels is his receiving the position of civilian defense minister. However, all the respondents interviewed by Izvestia doubt that until full completion of the military reform, Serdyukov will be dismissed.

“Too much work is still to be done to stop it like this,” the officers explain.

Izvestia asked Dmitry Rogozin directly whether he was planning to become the Minister of Defense in the new, “narrow” government of Dmitry Medvedev?

- You can dream about anything. But this question is decided only by the president of the Russian Federation. “It's unethical to talk about this now on the part of a civil servant, which I am,” says Rogozin.

We are in Yandex Zen
"Iskander" in Syria. Rocket Detective
Rogozin visited Nizhny Tagil, shot from a tank and a gun
23 comments
Information
Dear reader, to leave comments on the publication, you must to register.