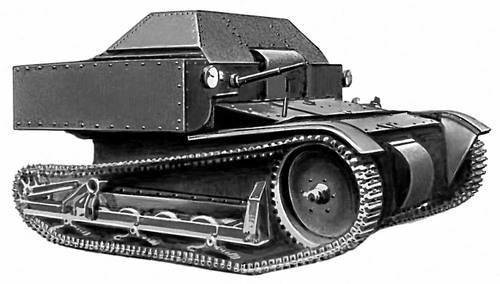 Making light and medium tanks infantry escort, Soviet tank engineers were looking for the possibility of building a simple and inexpensive machine to manufacture that would meet all the requirements for light tanks. The main focus of this research was the creation of tankettes, fast and maneuverable and at the same time well armed, capable of providing direct fire support to the advancing infantry, independently conducting reconnaissance and destruction of enemy personnel. In the 30s of the last century, the USSR purchased several samples of the English Carden-Lloyd wedge, on the basis of which the Soviet T-27 wedge was later designed and adopted for the armored armored units of the Red Army. However, the fighting qualities of the T-27 left much to be desired: weak weapons, thin armor, unreliable chassis of the car and low maneuverability encouraged engineers to create an alternative to this wedge. The protracted bloody battles on the Karelian Isthmus during the Soviet-Finnish war revealed a number of serious shortcomings of the T-27, as well as other vehicles adopted by the Red Army. Given the urgent need for the military in a small and maneuverable car, at the end of 1939 in the Design Bureau of the Kirov Plant under the supervision of J. Ya. Kotin begins work on the creation of a new model of the PPG-1 (Mobile Machine Gun Socket First), or another existing name - “Object 217”, L.E. was appointed as the project manager and chief engineer. Sychev. Within several months, drawings are created, the chassis of the machine is developed, and work is underway to create a machine in metal. 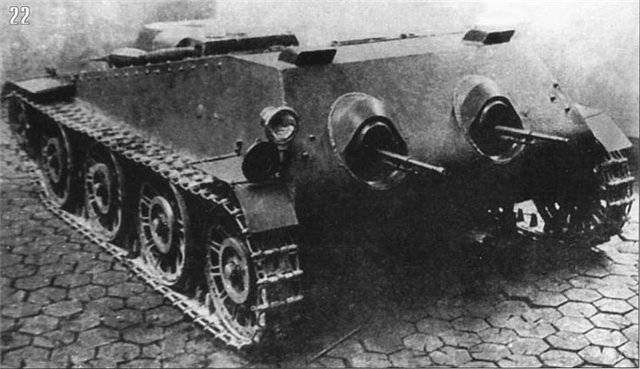 At the end of March 1940, the first prototype of the machine was created, which was immediately sent to the factory and then military tests. Armored tanket was assembled from rolled armor, with thickness of armor plates from 8 to 20 mm, located with a small rational angle of inclination. The actual combat mass of the PPG-1 was 1,7 tons. The armament consisted of two tank 7.62-mm machine guns DT-29, installed in ball bearings, in a frontal inclined armor sheet with a thickness of 20 mm, which allowed firing only at the course of movement with a small angle of horizontal pickup, that is, the firing sector was extremely small. Behind the frontal armor plate there was a very close fighting compartment, along the sides of which was placed ammunition from 30 disks for DT machine guns. The unit accommodated two crew members, and during the battle both arrows were in it in the prone position, which was a characteristic and unusual feature of this project. However, such a crew deployment made it possible to make a car with a very low silhouette — only 86 cm, which made it less noticeable and reduced the vulnerability of the BCP-1 to anti-tank artillery fire.

On the march, the top of the car could be raised and the crew took a sitting position. Machine control was carried out only with the help of levers. The running gear of the tank, the rear drive wheel-sprocket, four rubber-coated large-diameter track rollers, support rollers and a sloth were absent, the first support roller served as a guide wheel. The power unit of the machine - the PMZ carburetor engine with a power of 16 hp, located in the aft part of the armored hull - allowed the speed of 16-18 km per hour to be developed on the highway. However, due to the low engine power, the wedge barely overcame the rise of more than 30 degrees, off-road permeability was also unsatisfactory. To move over long distances, it was planned to use trucks, in the body of which a wedge of the BCP-1 could be placed for transportation.

The test results turned out to be extremely unsatisfactory, the machine did not justify the hopes placed on it. Despite good booking and low hull height, the project had serious flaws - the limited shelling sector, the very inconvenient crew location, the low maneuverability and maneuverability, led to the fact that further tests were refused. The project was recognized as unpromising and having no technical or military value. The order for the production of an experimental batch of machines was canceled, and soon all the work on the BCP-1 project was discontinued. At this, one might say, production and development of machines of this type were discontinued. AT stories domestic tank building "Object 217" remained one of the last samples of tank shoes, created in the Soviet Union in the prewar years.

We are in Yandex Zen
Great success of small tanks
Iron fist of the Red Army. Creation of armored troops
2 comments
Information
Dear reader, to leave comments on the publication, you must to register.