October 22 2011
2
Appearance of this kind weapons in Russia it was a bit chaotic. In 1894, the first 152-mm howitzers brought from France appear, and, interestingly, the customer of these guns is not artillery troops, but engineering. After the first shooting practice, it turned out that French howitzers turned out to be mediocre, the shooting characteristics were unsatisfactory. For comparison, domestic 152 mm artillery guns fired 41 kilograms at a distance of 8.5 kilometers, French howitzers fired 33 kilograms shells at a distance 6.5 kilometers. Maintenance personnel 9 people, the transition to the combat position 3 minutes, the transfer of weapons in the hiking position 2 minutes.

The engineering department transmits howitzers to the department artillery, which does not express much joy from the railway guns. The guns fall into the fortress of Kovno, but do not participate in the fighting, since at the time of the start of the First World War they were morally outdated. 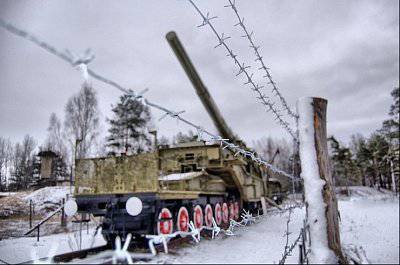 The use of railway guns in combat operations and the large losses of stationary large caliber guns make the use of artillery guns at a railway installation relevant. The Russian State Agrarian Administration begins the process of creating a mobile artillery gun, taking as a basis the railway platforms for transporting large-scale marine guns and 254-mm caliber artillery guns, launched in 90-s for installation on the Rostislav battleship.

At the end of April 1917, GAU signs a contract with the Metallurgical Plant of St. Petersburg for the construction of two artillery rail systems.

14 July 1917, the first AU on the railway platform stood on the rails, the second installation came out 16 August of the same year. The tests were successful, and the guns were put into operation by the Russian Army. Already in the Red Army, 254-mm artillery guns were dismantled, 203 / 50-mm M3 system guns were installed instead. From the artillery installations of this type "TM-8" to the beginning of the Second World War, only 2 units remained in service.
In 1927, at the same factory, but already in another State - USSR, engineer Dukelsky suggested installing artillery shells of caliber 356 mm on the railway platform. In 1931, the Nikolaev plant No. 1 received an order for the production of four TM-14-198, during 1932-1936, orders were received for the production of TM-2-12, TM-3-12 with tools of 305 caliber mm.

Production of these installations is almost the same. All guns were taken from the battleships of the Navy or from the warehouses where they were in stock. The gun barrels were held together, possessing a high firing range, and had little survivability. So, the 305-mm gun barrel was removed and sent to the factory after 300 shots, and the 356-mm gun barrel was removed after 150 shots. At the factory, at the gun, the inner tube was changed, the production of this operation lasted a couple of months. 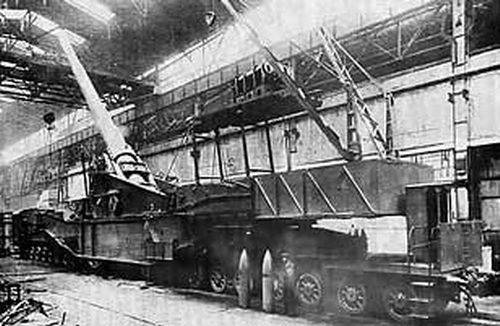 The most serious problem of artillery guns on railway platforms - the production of horizontal aiming and guidance.
For TM-8, the problem was solved quite simply - the whole system had an angle of rotation of 360 degrees on the central axis, the platform itself was attached to the supporting legs, extended and fixed on the ground. 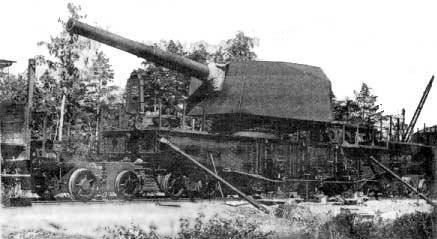 To increase the horizontal targeting angle, at first, rounded strips, similar to a mustache, were built, but this solution was not suitable for aiming fire on enemy moving surface ships. It was decided to build fortified railroad complexes with a concrete foundation in strategic areas of the Pacific and Baltic coast. The complex consisted of a concrete platform located at a distance from each other, a reinforced concrete observation tower with a height of 30 meters. Two direct railway lines and two spare branches led to the complex. With the strengthening of the gun platform in the complex, it turned into a standard coastal gun installation. 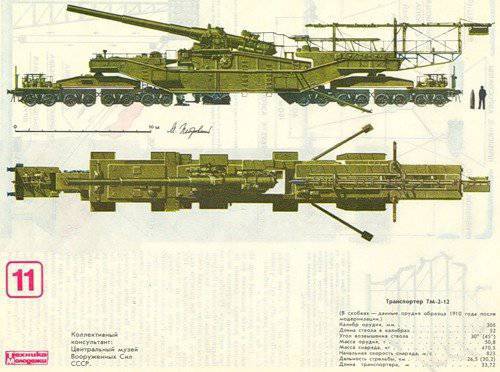 In the undeployed position, the platforms could move without any problems along the railways of the Soviet Union, for example, moving the battery complex on the railway platforms from the Nikolayevsky plant to the test in Leningrad and leaving for the Far East for combat duty was a simple matter. The speed on the steam train 45 km / h, but the platforms TM-3-12 and TM-2-12 had their own engines that could move them at speeds of 22 km / h.

At the end of the 40-ies, an attempt was made to install artillery pieces of caliber 1 mm on the TM-14-368 project platforms, due to successful tests of projectiles of this caliber. Thus, a 368 mm caliber projectile weighing 252 kg and active ammunition 120 kg weighing at an estimated speed of 1400 m / s could hit an enemy's armored target at a distance of 120 kilometers. But the serial replacement of 254-mm guns on the 368-mm guns did not take place due to the constant loading of factories having the ability to make this replacement - the Barricades plant and the Bolshevik plant. And the tasks for which there was no production left at the time of production - until 39, the strategic goals were in the Baltic States, and in the 1939, the Baltic States became part of the USSR.

The 254 mm TM-3-12 rail artillery unit is stationed at the eternal parking lot near the Krasnoflotsky fort near the city of St. Petersburg.