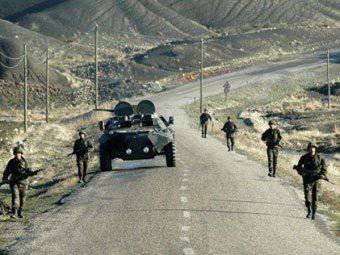 The military operation on the Turkish-Iraqi border and in northern Iraq continues. According to the world media, Turkish troops are delivering rocket-bombing and artillery strikes on the territory of Northern Iraq. And the Kurds promise to deliver a serious blow to Turkey. According to the Turkish political leadership, the Turkish army will conduct the operation as long as it will be necessary for complete victory. And negotiations with the Kurds, after their terrorist attacks, are impossible.


About 10 thousand Turkish military (22 battalion) were involved in the operation against the Kurdish units. The press reported that the Turkish Air Force launched rocket-bombing attacks on a number of bases and facilities of the Kurdistan Workers' Party (PKK) in the areas of Kandil, Zap, Hinere, Hakurk, Metina. According to Turkish intelligence, it is there that various camps and bases of Kurdish extremists are located. Information about rocket and bombing strikes in northern Iraq is confirmed by Iraqi media.

CNN-Turk reported that special operations of the gendarmerie and commandos are participating in the ground special operation on the border of the two states, they are supported by helicopters from the air. According to media reports, at the Diyarbakir base, where the Second Tactical aviation command, deployed more than 30 combat aircraft from other Turkish air bases.

At the same time, in the border areas of southeastern Turkey, a “counterterrorist operation” is continuing to clean up the territory from the PKK militants. Turkish soldiers are combing the mountainous areas and those areas that are most often used by Kurdish militants to advance into the interior of Turkey.

The reaction of the world community

The United States supported the actions of Turkey, so US President Barack Obama made a statement saying that Washington will continue cooperation with the Turkish government. Ankara seeks to neutralize the terrorist threat from the Kurdistan Workers' Party (PKK) and ensure stability in south-eastern Turkey. Turkish citizens "deserve a decent, safe and peaceful life." On the path of Turkey to this future, Ankara "will always have a friend and ally in the face of the United States."

The UN Secretary-General, Ban Ki-moon, in his statement called the "unacceptable" attacks of Kurdish militants from Iraqi territory on neighboring states and called for Iraq and Turkey to engage in constructive dialogue.

The head of the German Foreign Ministry, Guido Westerwelle, said that he was “shocked” by a significant number of victims of this terrorist attack. Berlin, he said, is watching with great concern the outbreak of tension and violence in the territory inhabited by Kurds. The diplomat called on Baghdad and Ankara together to seek a solution to this serious problem.

Kurdish sources reported that the attack on the Turkish border posts was carried out not by PKK units, but by the fighters of the National Self-Defense Forces (NSS). This is the military wing of the Association of Kurdistan Societies (KLA), which unites various organizations, parties from all four parts of Kurdistan - in Syria, Iraq, Iran and Turkey, as well as Kurdish diasporas living in Europe and other foreign countries. The Kurdistan Workers Party is also included there.

PKK spokesman Ahmed Deniz promised that in the event of a large-scale invasion of the Turkish army in Northern Iraq, Turkey would undergo "stronger blows" and "suffer heavy losses."

In an official statement, the NSS leadership explained the reason for the attack on the Turkish border forces. According to the Kurds, when Turkish President Abdullah Gul visited Hakkari province in southeastern Anatolia, he did not meet with the Kurdish civilians and public organizations, and was only engaged in military matters. The attacks will continue until the Kursk issue is resolved, and the Kurds live "in constant fear and persecution." Turks have recently been pursuing a repressive policy towards the Kurds. More than 4 of thousands of political and public figures of the Kurdish people, who dared to express their opinion, different from Ankara's point of view, have been arrested. They are not related to the armed struggle.

Ankara was accused of “political genocide”. Illegal arrests, detentions and torture are carried out in the country. These actions only increase the resistance of the Kurdish people.

Ankara proposed a military alliance to Tehran against the PKK

On October 21, Turkish Foreign Minister Ahmet Davutoglu held talks with his Iranian counterpart Ali Akbar Salehi. The conversation took place in Ankara. The Turkish minister asked Iran to support the efforts of his state in the fight against units of the Kurdish Workers' Party. True, other details of the meeting are unknown.

It should be noted, Ankara and Tehran have previously cooperated in this matter. For both countries, the Kurdish issue is very important, and the fight against Kurds is going on not only in Turkey, but also in Iran. In addition, Tehran launched a military operation against the PKK in the summer of 2011, after a series of terrorist attacks on the Iranian military. The units of the Islamic Revolutionary Guard Corps took part in it.

Turkey and Iran are competitors in the struggle for leadership in the Islamic world and in the Middle East, but in this case they have a common enemy.
Ctrl Enter
Noticed oshЫbku Highlight text and press. Ctrl + Enter
We are
Rozhava - the land of the Soviets. How do Syrian Kurds fight and build a new world?Turkey against the Kurds. Is there a new phase of conflict ahead?
11 comments
Information
Dear reader, to leave comments on the publication, you must to register.