Call and / or contract 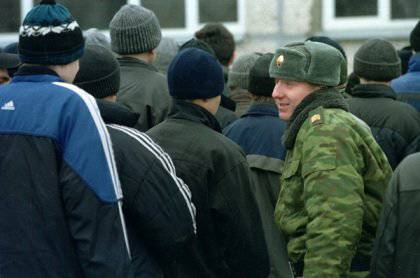 In Russia, the autumn call began again. This time 135 of thousands of recruits should go to the army, i.e. half as much as last fall. The deputy chief of the General Staff, V. Smirnov, explains this reduction plan by the fact that there are enough 135 thousands for all the needs of the Armed Forces. True, it must be admitted that due to the specificity of the working days of the military registration and enlistment offices, it is very difficult to gather a large number of recruits. However, official statements by the Ministry of Defense say that the main task of the current appeal is not to collect the necessary number of future soldiers, but to recruit only healthy and service-ready guys.


At the same time, the Ministry does not forget about the transition to a professional army. The number of contract soldiers is constantly growing, but it is still far to complete transition to the army without conscripts. It should be noted that an absolute transfer of the army to a professional basis is not even planned yet, including due to the fact that the number of people willing to serve under the contract is less than what is required for a professional army. Not everyone is ready to go to contract service. The main reason for reluctance is the financial side of the issue. The promised salary, of course, is at a quite decent level, but the peculiarities of the work can repel "applicants" from the contract. There is a fairly common opinion that social motivation will help to interest those who have doubts. This may be a benefit for higher education, free housing or at least preferential terms for its purchase.

Even these steps, according to the coordinator of the organization “Citizen and Army” S. Krivenko, may be of interest to the guys from the provinces. Under such conditions, children from small towns or villages, remaining after military service, will be able to get an education and even make a career in the armed forces. In the future, all this can even restore the prestige of military service among the masses.

The idea of ​​giving contract workers benefits for education and housing is good, but all this will cost the country a lot of money. Even very large ones - it is planned that 425 will have thousands of professional soldiers in our army. Yes, and with a set of people, too, there may be problems. The majority of contract servicemen are planned to be recruited from former conscripts, but now about half of the draftees are not serving with category “A”. The level of education of draftees does not look optimistic either - only three-quarters have the total full. And do not forget about those recruits who, in good health or have an honest reprieve, or frankly "mow". It is clear that the "mower" is unlikely to voluntarily go to the contract. So the number of potential professionals is far from the mark. But in the ointment there is also a spoon of honey: the majority of those who want to go to serve under the contract will have the necessary motivation, even with a mercantile touch.

And what about the concept of a contract army, is there any sense in it? Europe and the United States decided that there is. However, in the former, all this is happening “under the sauce” of the reduction of the armed forces, while in America an unpleasant feature of a professional army has surfaced. When casualties in Afghanistan or Iraq reached a certain size, potential recruits chose to go anywhere but not to the army. Therefore, according to a number of experts, if America has to participate in a serious mass war, then it will be necessary, if not to introduce a mandatory appeal, then at least to recruit volunteers.

But Israel, which is constantly engaged in active and sometimes not very military operations, is recruiting its army in conscript form. Moreover, they serve in the IDF regardless of gender - it affects only the service life (for men - 3 of the year, for women - 2). And, interestingly, the Israel Defense Forces are one of the most advanced in the world. Even despite the frequent cries of the fundamental inferiority of the draft army.

It is believed that the army of the future will be exclusively professional. However, as American experience has shown, this is not quite the right approach to business. Also in favor of professional armies lead the complexity of modern weapons. But one can argue with that: In the Middle Ages, it took at least several months, if not years, to train an archer. To train a modern soldier to handle a machine gun is much faster. At the same time, with the advent of new types weaponstheir use and maintenance is simplified. And this is typical even for modern classes, for example, the operator of the Malyutka anti-tank missile system should have remarkable skill in order to correct the rocket flight with one button. But modern anti-tank systems only require the operator to launch a rocket, she will do the rest herself.

Thus, it can be assumed that in the near future the draft army will not go anywhere. Such armed forces may have different numbers, different equipment, etc. But the principle of formation with its mobilization efficiency is too early to send to the archive.

We are in Yandex Zen
Contract soldiers are getting bigger
Summon-2010: Autumn Aggravation
38 comments
Information
Dear reader, to leave comments on the publication, you must to register.