"Wings of Tauris" originally from Borisoglebsk

The base of the aerobatic team "Wings of Tauris" is Borisoglebsk (Voronezh region) and its aviation a base with a rich history. It was the Borisoglebsk flight school in the 20s that the famous Valery Chkalov graduated from. It was the Borisoglebsk Higher Military Aviation School of Pilots in 1981 that Viktor Bondarev, Commander-in-Chief of the Russian Air Force, graduated from. It must be emphasized that the location of the “Wings of Tauris” is a reviving aviation base, which began to decline in the 90s, and in the years of the so-called “Serdyukovschina” actually ceased to exist, even even senior students of the Krasnodar branch ceased to provide training Voronezh VSC.

Now, on the territory of the former BVVAUL (the current aviation base), the necessary infrastructure is being restored. The reconstruction of the four-story barracks building, which now takes on a truly modern look, is being completed. And although the target date (by March 2015), as stated by the representative of the contractor’s company, FSUE “Main Directorate for the construction of roads and airfields at Spetsstroy of Russia”, did not have time to meet because of the problems encountered with the “optimization” of financing, the work continues, and By the end of this year, the barracks, equipped with all the necessary things, will be fully prepared. 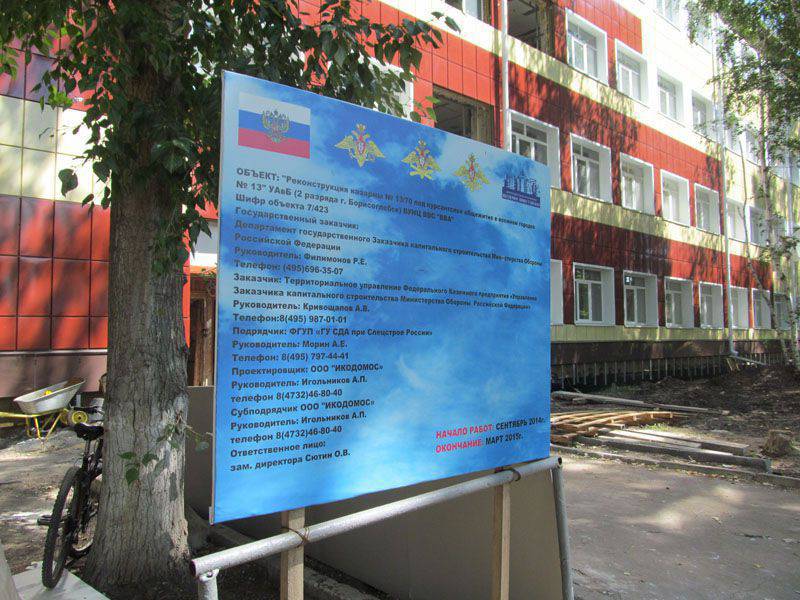 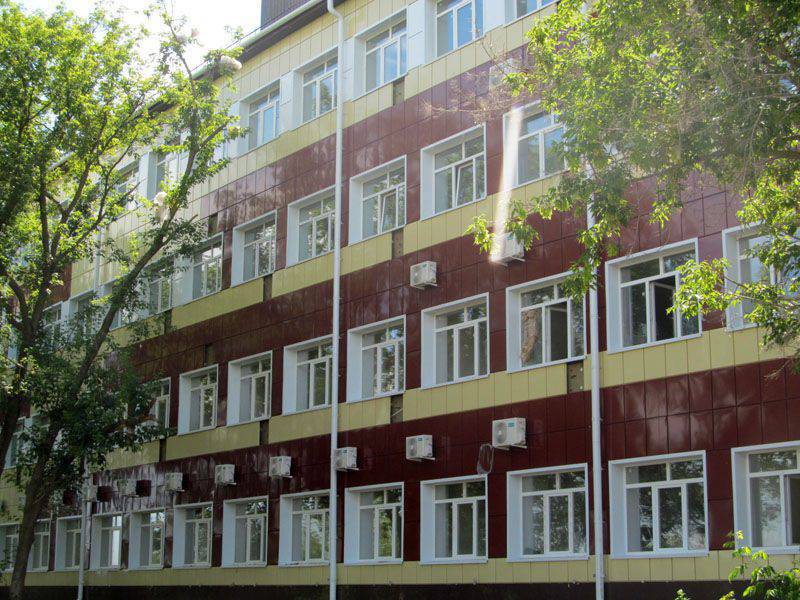 And this is how the same barracks looked just 3 a year ago (from the "IN" report): 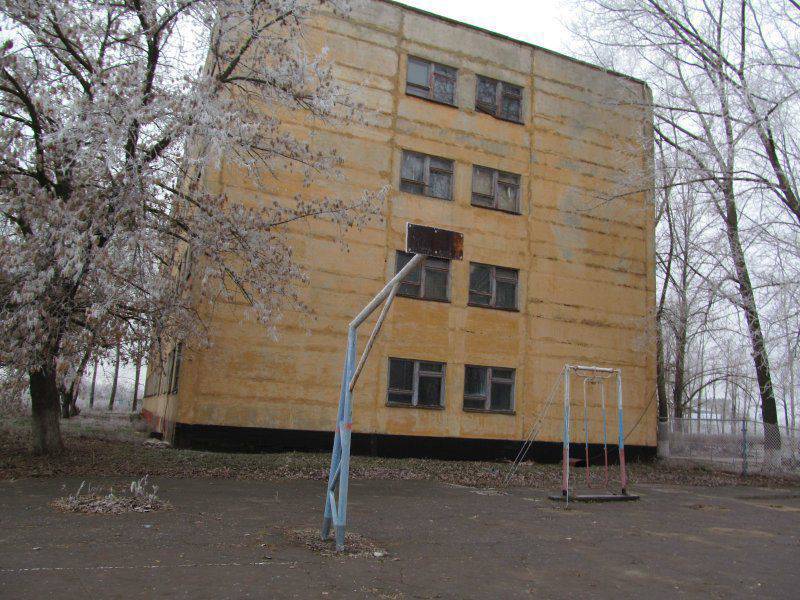 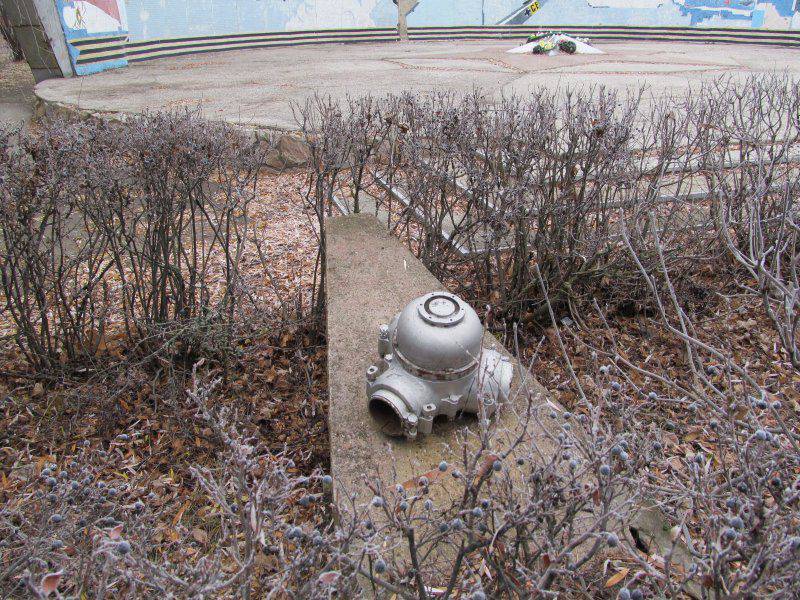 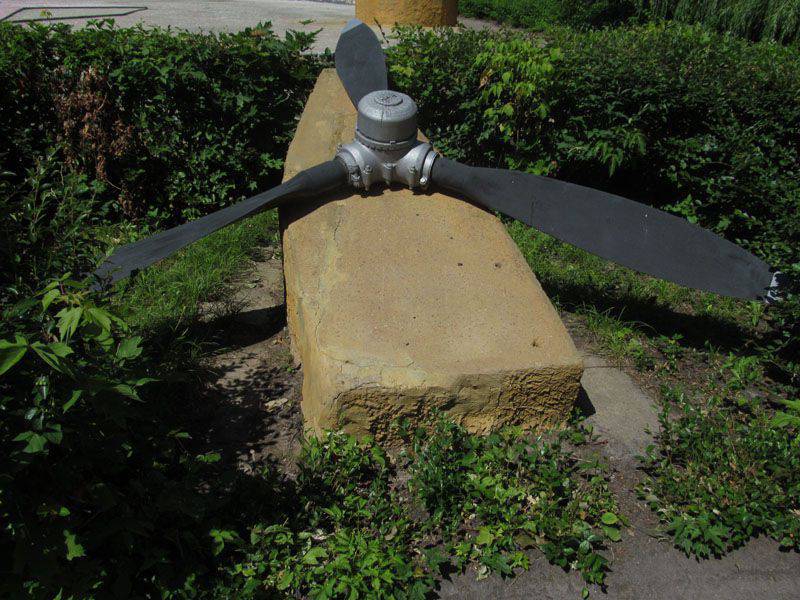 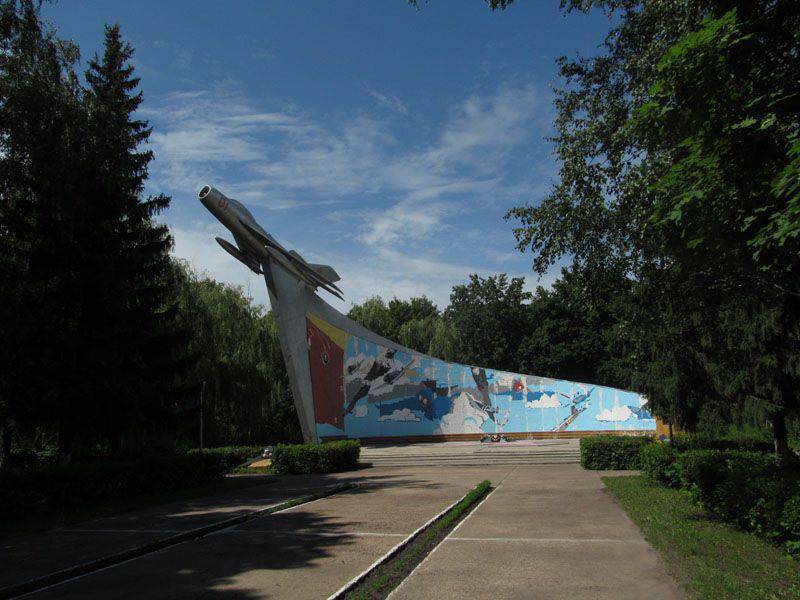 A barracks complex is being prepared for the recruitment of senior cadets of the Voronezh VUNC for their flight practice at the airfield of the Borisoglebsk aviation base, on which the newest Russian combat-training aircraft Yak-130 are based. 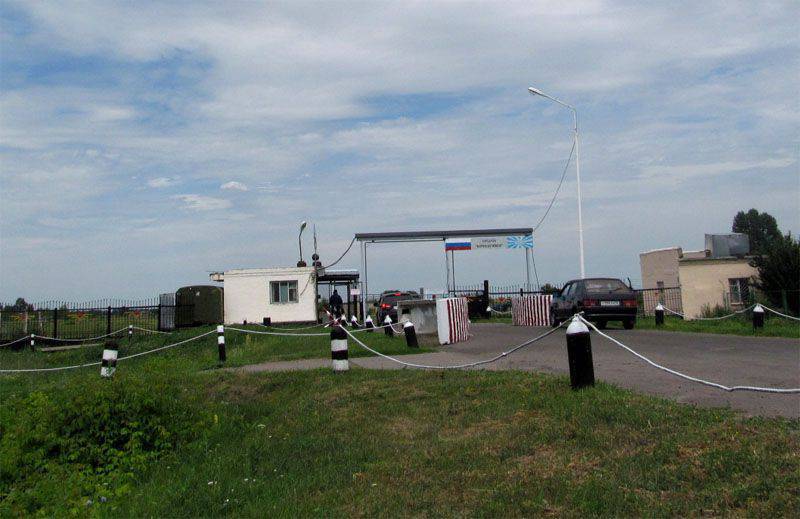 By the way, the first cadets have already been noticed on the territory of the air base - they were noticed at the work on the improvement of the renewed territory, which also pleased - it means Serdyukovsky “outsourcing” has not yet completely eliminated the understanding of the need for everyday labor from current and future servicemen of the Armed Forces of the Russian Federation. component of the national army tradition. 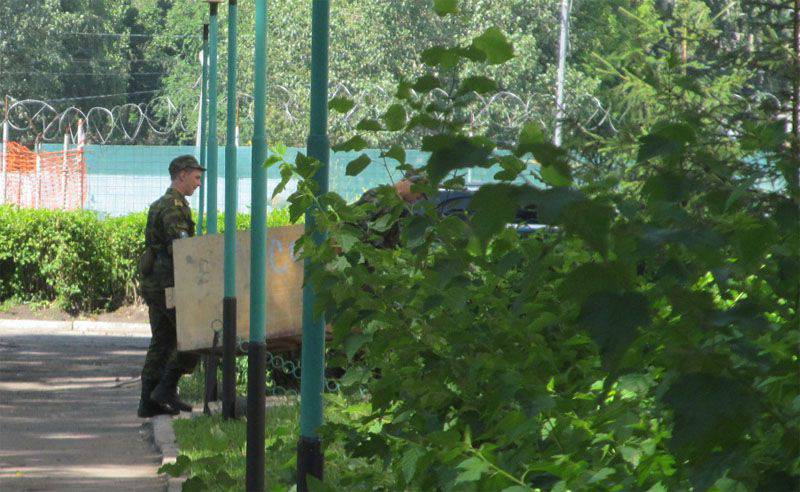 And then, after all, some 4-5 years ago, the Ministry of Defense persistently asserted that if you are an ordinary shooter, you should only shoot, if you are a cadet of the Russian Air Force, you should only fly ... There is nothing to fly - "not our problems" ... No, they say, socially useful things, no work in the kitchen, no repairs - the grandmother-cleaner, the janitor grandfather and the visiting mechanic will do everything for you - you will have to arrive on the battlefield and everything within the framework of the outsourcing program, they will repair, adjust, subrazhtuet ... For these "moralizing" you would need someone odrehtovat, but let's not talk about sad things ...

The air base is being revived, the new aerobatic team got the opportunity to improve their skills. At this stage, work is underway to create for its “Wings of Tavrida” its unique appearance. He has the "Swifts", "Russian Visitors", "Falcons of Russia", should be and "Wings of Tauris." It's about the so-called "livery" - the characteristic color of the aircraft group. On this occasion, the commander of the Borisoglebsk aviation base, Colonel Alexander Grun, spoke:

I would like to see in the coloring of the aircraft historical traditions characteristic of this design bureau. I think it should be something in red. 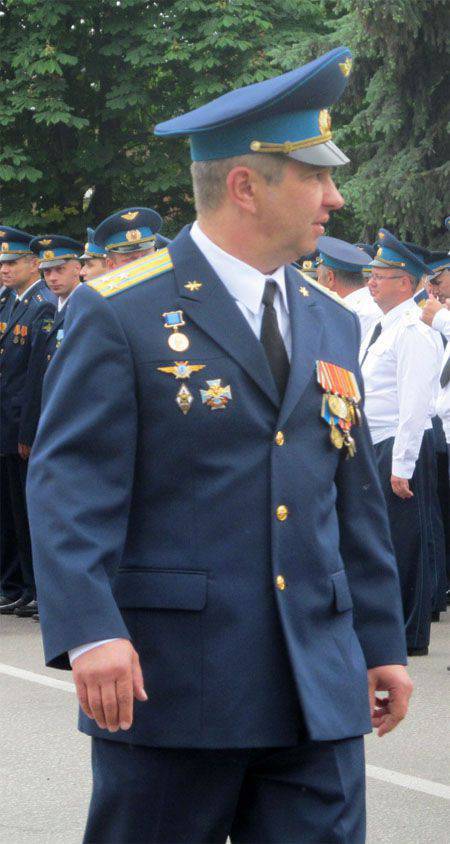 And, indeed, the “livery” for the Yak-130 aerobatic team “Wings of Taurida” will most likely be in bright red tones - so that, as the group pilots themselves say, for the viewer there was not only the spectacularity of the flight itself, but also its beauty - in the literal sense of the word. As an option, the liveried Yak-130 as a possible prototype of the final concept of the “Wings of Tauris” presents the following form: 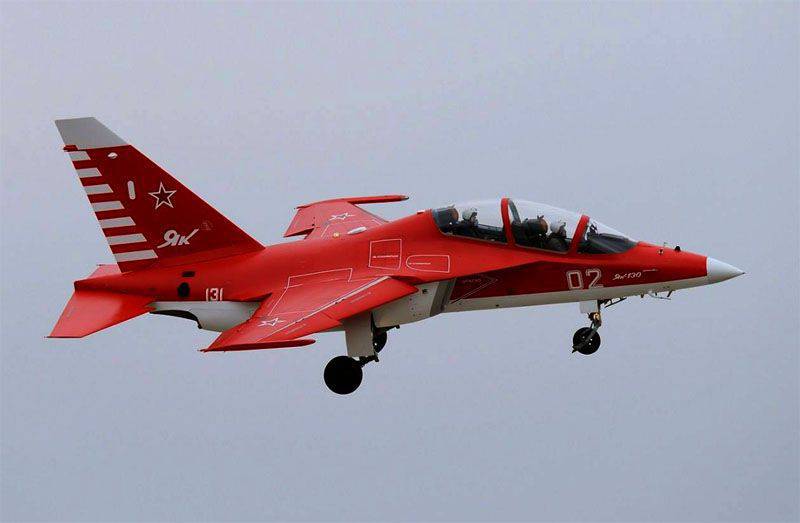 And these are unique flight shots presented by Sergey Kudryashov. The red "livery" "accompanying" is perfectly visible:

And this is a video from the corporation "Irkut" on the subject of aerobatics on the Yak-130:

And again - the red wings, which are not to be confused with anything.

From the official release of the Yak-130:

The Yak-130 twin combat training aircraft provides basic and advanced training for pilots of modern and advanced combat aircraft, including the super-maneuverable fighters of the 4 ++ and 5 generations.

The complex of guided and unguided weapons makes it possible to effectively use the Yak-130 during training and in solving combat missions.

The high resource and low cost of operating the Yak-130 minimize the cost of training and maintaining the combat capability of combat aviation pilots.

It is gratifying that Borisoglebsk got the opportunity to become the Motherland for the new aerobatic team - the group that flies the newest Russian-made aircraft. After all, this city, with its enormous contribution to the development of national military aviation, clearly deserved this right. Now, at the main checkpoint of the Aviation Training Base of the Ministry of Defense of the Russian Federation, all those who are going to be on the territory are met by an information poster telling that the Wings of Tavrida aerobatic team is here, which has already participated in the Parade in honor of 70 Anniversary of the Great Victory 9 May 2015 in Moscow: 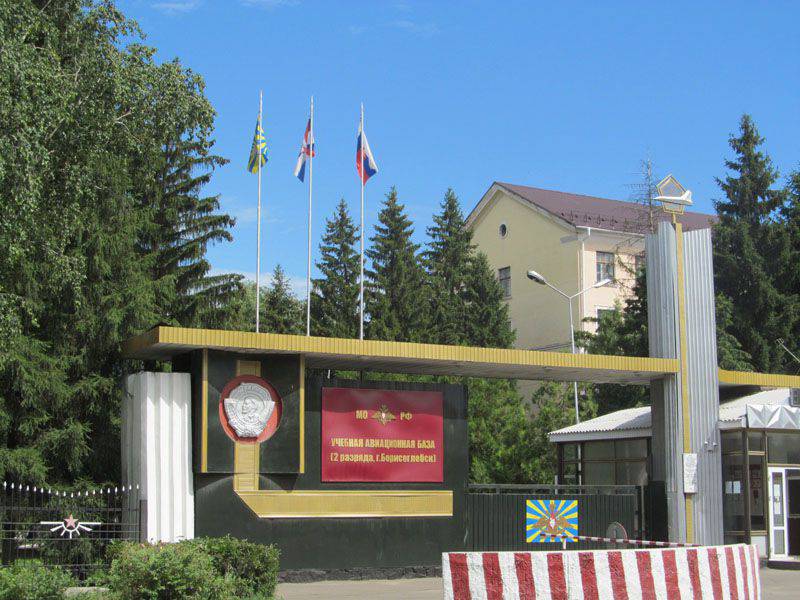 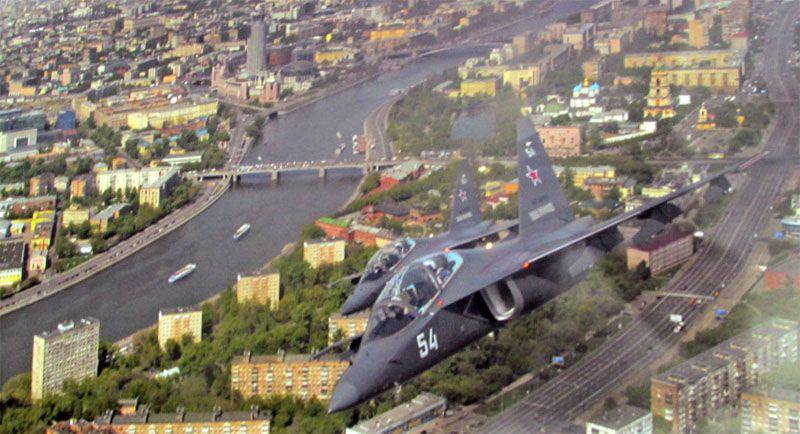