July 7 2015
13
At the time, these people, who then called themselves Lithuanian democratic forces, called the following as one of the basic arguments for leaving the Lithuanian SSR from the Union of Soviet Socialist Republics: The Soviet Union, they say, is a “militarized state”, sending its troops to participate in various armed conflicts around the world. The main emphasis was placed on the fact that Lithuanian young people do not want to serve in such an army, do not want to become victims of the war in Afghanistan; Lithuanian mothers do not want to receive news of the death of their sons somewhere in the Kandahar region or in the jungles of tropical Africa, where the USSR sent its limited military contingent.


For obvious reasons, for the majority of Lithuanian residents this argument alone looked weightier enough to say that its Soviet “no!” Was in the Soviet Union as part of the Soviet Union. From the USSR, Lithuania eventually emerged, and now, it would seem, a bright future began for this republic under an open peaceful sky, when no "military" could prevent Lithuanian citizens from building their small but very proud state on the shores of the Baltic. Lithuanian youth of military age rejoiced, Lithuanian "soldiers' mothers" rejoiced: well, now there is definitely no "Afghanistan", no "Angol" - no military operations anywhere! ..

But here is a strange development of events ... It turned out that Lithuania, like the other two Baltic “sisters,” literally cannot live without the desire to participate militarily anywhere. And literally a month after the collapse of the Soviet Union - in January 1992 - the then Baltic authorities collectively appealed to NATO to take Lithuania, Latvia and Estonia into their friendly "pacifist" family, creating their offices at the headquarters in Brussels. Before joining the North Atlantic Alliance, 12 remained over the years.

Here, one question arises: those who sent requests to NATO actually believed that the western military bloc was such a camouflage umbrella that, thanks to exclusively external efforts (the efforts of the armies of the USA, Canada, Britain, Germany, France, etc.) would close the Baltic States from “Adversity”, but at this time, Lithuanian mothers, together with Lithuanian “children” of military age, will peacefully smoke sprats and whip cream on the Baltic coast? Apparently, in a certain sense, he warmed the experience of Luxembourg, which seems to be similar to NATO, but its presence there is purely symbolic (with his “army” in 880 people at that time). The Baltic must have forgotten about the significant difference between Luxembourg and Lithuania. Luxembourg is the most important financial center of Europe, without which NATO can be tough, and what is Lithuania? And Lithuania is a moneyless euro periphery, the basis of the existence of which is (perhaps) Russophobia ...

It is unlikely that the authorities in the Baltic states believed that the three Baltic countries in NATO had a Luxemburg future, but the Lithuanian people continued to hang the appropriate noodles on their ears.

And now - the first victory of Lithuanian "pacifism". In 1994, in the framework of the NATO action “Partnership for Peace” (and for the sake of what ... of course, for peace ...), the first Lithuanian servicemen went to the “peacekeeping” mission to the Balkans. Several dozen "pacifists" of Lithuania, not yet being military personnel of a NATO member country, were in a joint contingent in Croatia and Bosnia and Herzegovina. That is, since the “tokkats” performed by the Lithuanian “democrats”, some 5-6 years have passed about the need not to participate in various kinds of operations abroad ...

Several platoons of Lithuanian military personnel (total 90 people) (the first - under the command of the captain of the Armed Forces of Lithuania Arturas Črapko) from August 1994 of the year to February 1996 of the year (officially under the auspices of the UN - the so-called mission of the UN Protection Force, and unofficially - NATO watch) participated in the Balkan operation to “protect public order”, “escort humanitarian supplies”, etc. The first Lithuanian mission was abbreviated to LITPLA-1, and this mission was part of the peacekeeping force under the command of the Danish military (for reference: Denmark is a NATO member from 1949 of the year). 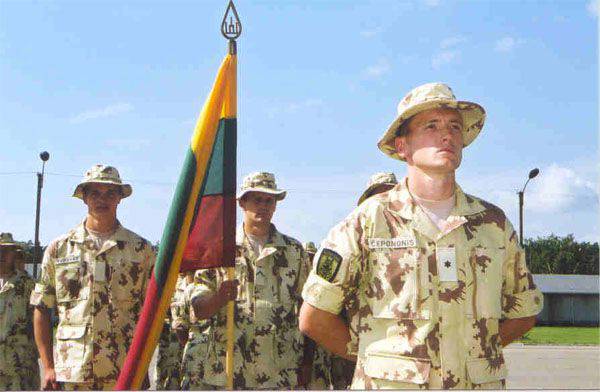 Croatia and Bosnia turned out to be far from the only countries where the Balts were forced to send their troops to “deserve a blessing” from Washington and Brussels. By bitter irony in the 2002 year, which is remarkable - two years before joining the North Atlantic Alliance, Lithuanian soldiers again find themselves in Afghanistan. We are talking about participation in the operation within the framework of the mission of the so-called International Security Assistance Force of NATO. The main base for the deployment of the Lithuanian military has become a base in the Afghan province of Gore. On the background of the fact that in Lithuania itself the industry dissolved in the Baltic air, the NATO countries forced the country's authorities to finance a number of industrial zones in the above-mentioned province. According to the statements of the then Foreign Minister of Lithuania V.Ušackas made in 2009, Lithuanian taxpayers financed the Afghan province with 12,6 million litas for three years. Reportedly, the funds went to the construction of a children's center and the creation of three “micro-hydroelectric power stations”, of which two are no longer working today ... Does the “children's center”, funded by Lithuanians, operate?

An amazing slogan was even coined for the intra-Lithuanian “consumption”: “The Lithuanian mission in Afghanistan justifies the hopes”.

After the entry of the Baltic states into NATO, the soul went to paradise at all: the “area” of distribution of the Baltic military personnel practically coincided with the territory of military operations of the entire military bloc: Iraq, Afghanistan, Kosovo, Mali, Sierra Leone.

But wait ... And where are those Lithuanian “soldiers” mothers, where the howls of the “democrats” who declared at the end of 80 that not a single Lithuanian soldier would step outside of his state, because it would violate the peace-loving concept of Lithuania? Where are they all gone, eh? .. Yes, they just turned out to be planted on a short leash with all the consequences.

When they began to receive funerals in Lithuania, NATO immediately released the Baltic Circular, which bears the terrific title “Why we participate in international operations,” that is, began to explain to citizens why Lithuanians were dying in Afghanistan, Iraq and other countries thousands of kilometers away. from the borders of Lithuania itself. From the circular (translation):

Since the restoration of Lithuanian statehood, the country's defense policy has been based on the defense capabilities of Lithuanian citizens. In the event of external aggression, territorial defense plans should have been put in place. But as sad experience has shown, it can be difficult for a country to defend itself independently without external support. Lithuania was granted historical a chance to ensure their security by joining NATO. Lithuania has never had the security guarantees it has today. When Lithuania joined NATO, the country received the same level of security as the other 25 members of the Union. In turn, Lithuania took upon itself the responsibility of ensuring the security of its allies, just as the allies would defend Lithuania if necessary.

In 2005, the then Lithuanian Land Forces Commander, Mr. Pocius, decided to explain to the Lithuanian people why the Lithuanian military would again go to foreign countries to participate in military operations, although there was no longer any Soviet Union.
Potsius:
First, the prestige of Lithuania as a new member of NATO has grown greatly for our partners. Secondly, the peacekeeping assistance of our military is very much needed by local residents. Thirdly, such a mission is a test of extreme conditions for our entire army.

So that is ... What they asked to say, Putsius said, because Lithuania is an independent state, not some kind of Russia ...

By the way, the year 2015 is in the courtyard - the Balts have already been in NATO for 11 years, but there is still no exact data on how many of their servicemen in wars fired up by NATO puppeteers around the world have lost the same Lithuania. The official loss figures are just 7 or 8 servicemen, but this is something from Poroshenko’s series of tales about “six people killed while leaving the Debaltsev bridgehead.” Although Vilnius will call the dead even one person - this does not cancel the situation with double standards of the Baltic leadership. Moreover, these double standards for Russia, as they say, are damned - the leadership of the Baltic countries is impudently lying to their own people, and during all those years when Lithuania, Latvia and Estonia call themselves independent. It would be better to keep silent about such “independence” in a rag and hope that the people of the Baltic States are zombie masses, still capable of believing in this tale of the white bull ...

Fiery greetings to the Lithuanian "soldiers' mothers" and the "democratic herd", who were telling in 80 that the Lithuanian soldiers would serve only in Lithuania! Keep it up!..

Ctrl Enter
Noticed oshЫbku Highlight text and press. Ctrl + Enter
We are
Situational analysis of the death of the MH17 flight (Malaysian Boeing 777), made on the basis of engineering analysis from 15.08.2014Memo to mercenaries in Africa
13 comments
Information
Dear reader, to leave comments on the publication, you must to register.