Residents of the DNI: We remember those killed in Slavyansk 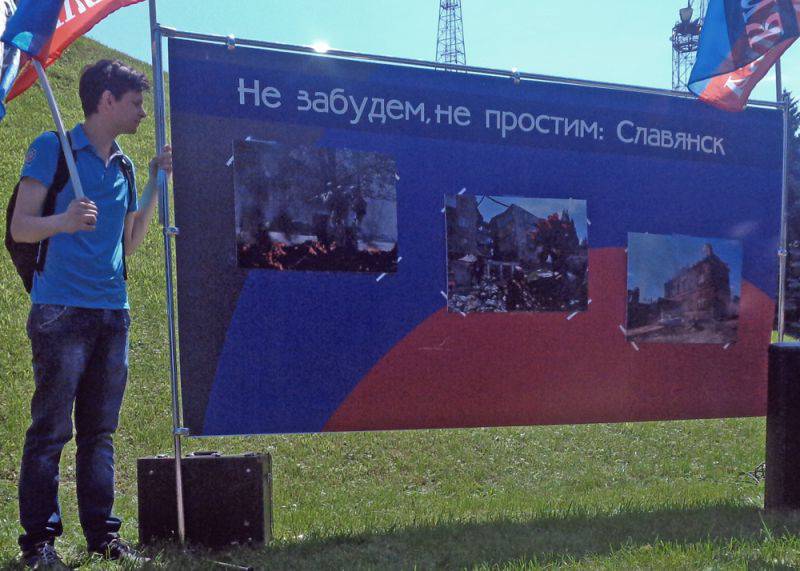 This city became a symbol of the heroic struggle of Novorossia, the Stalingrad of the twenty-first century. But now his name is pronounced with great pain: Slavyansk ... A year ago he, as well as several other cities of Donbass — Kramatorsk, Druzhkovka, Konstantinovka — were seized and occupied by the punishers of the Kiev junta.

The rapid onslaught of the neo-fascists was preceded by barbaric shelling of both roadblocks and residential areas. Blood was being shed, people were dying, and in the midst of this terrible terror against civilians, the Kiev regime was reporting on an “anti-terrorist operation”.

And how ukrohunta boiled her miserable "victory" over the poorly armed, still few and did not receive at the time sufficient combat experience defenders of Slavyansk! Over the city, the hated people of the Yellow-Blakyt flag were immediately hoisted, and mass arrests, executions, and torture began. There were, unfortunately, those who wrote denunciations even to close relatives - humanity often perishes under occupation conditions.

A year has passed. Now the Maidan regime deals not with a handful of militias, but with a fairly strong army of Novorossia. People steeled under shelling. Now almost everyone just grins in response to the new threats of the junta to the liberated cities of the DPR and the LPR. 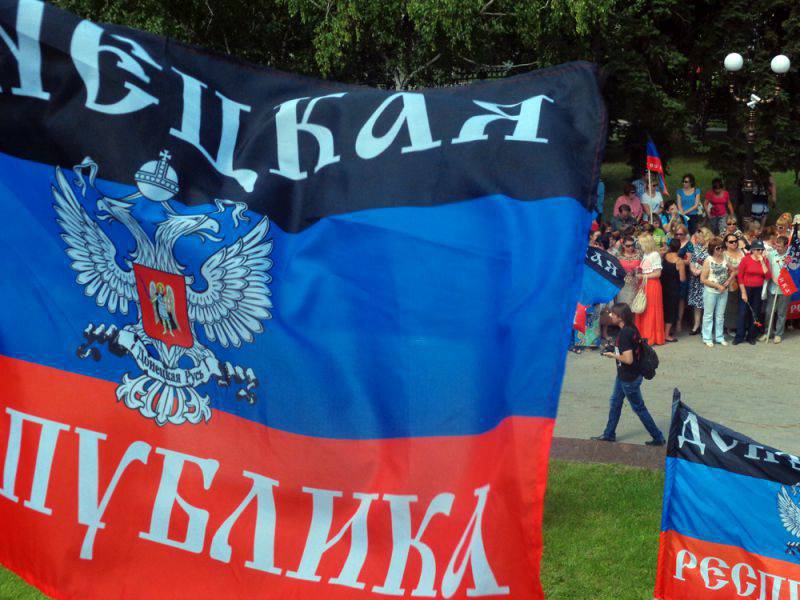 But this is laughter through tears, so characteristic of our people. Tears, because the loss of every person, every protector, every woman killed, every child torn by the damn it is an irreplaceable tragedy ... 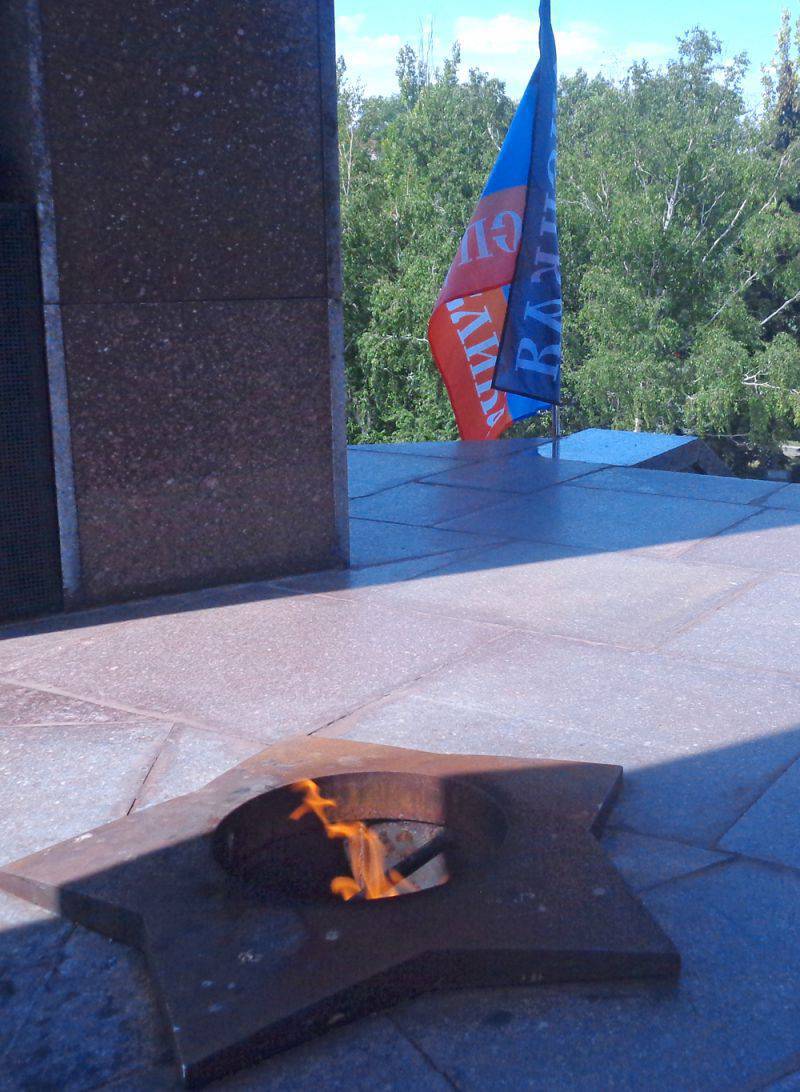 5 July in Donetsk in the Park of Slavic Culture, near the memorial "To the victims of fascism" and the Eternal Flame a rally requiem was held entitled "Do not forget, do not forgive: Slavyansk." Fighters who defended this city came to him and managed to survive in that meat grinder, as well as ordinary citizens. They came with children. It was not by chance that the place was chosen: although the memorial was set in memory of the victims of Hitler's fascism, now the new fascism continues to multiply the number of victims every day. 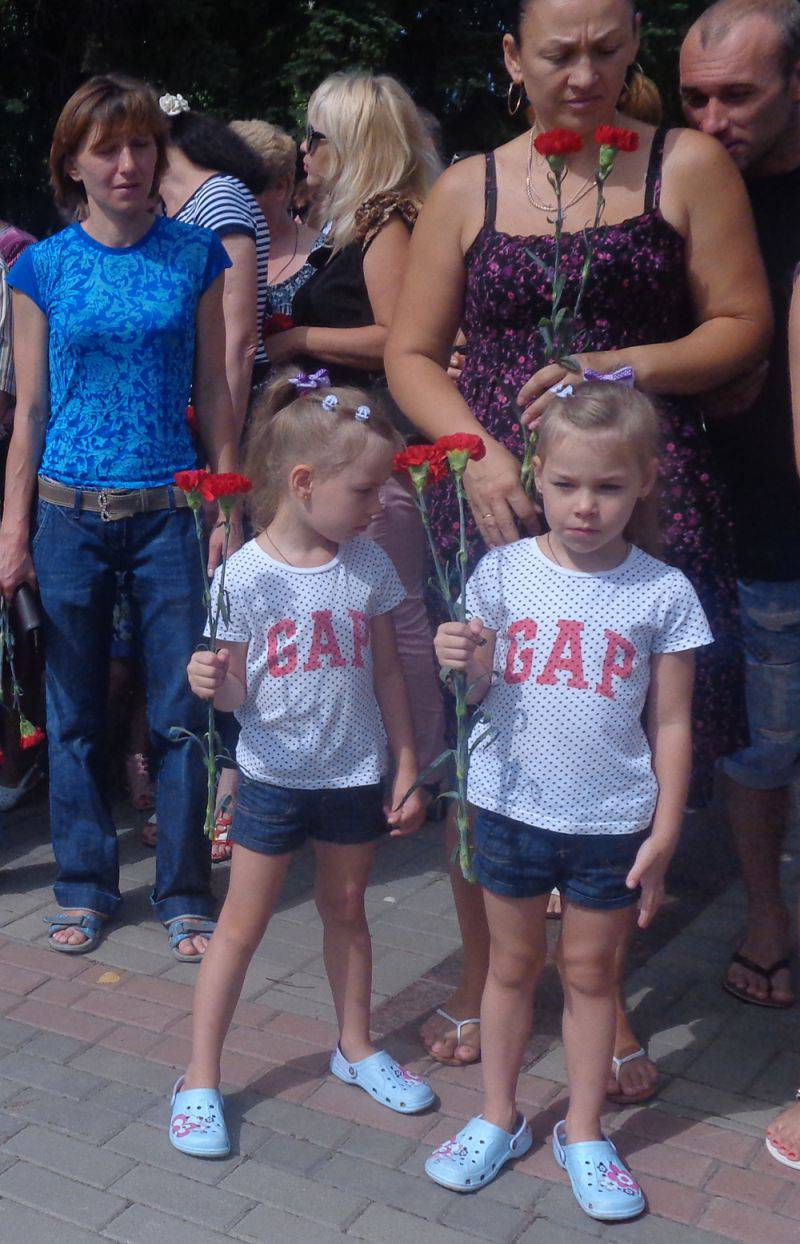 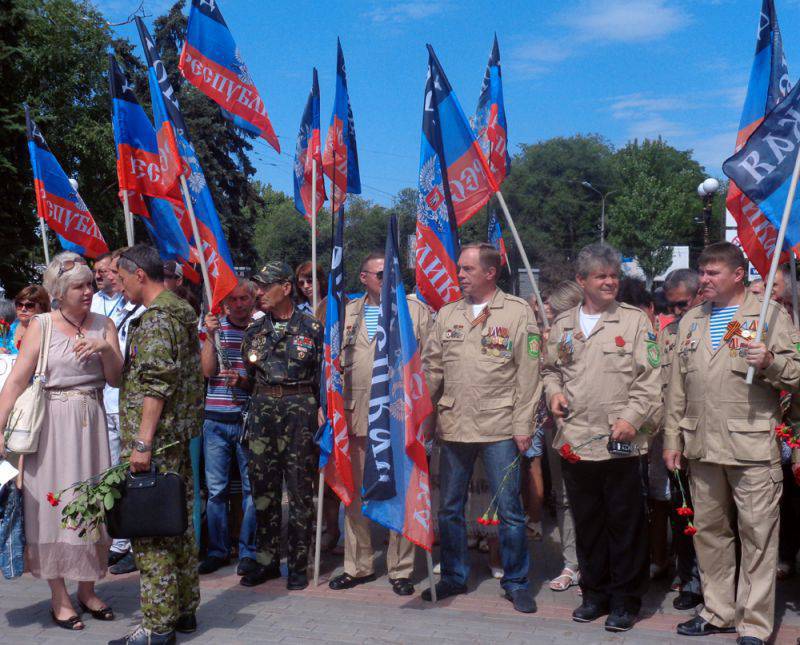 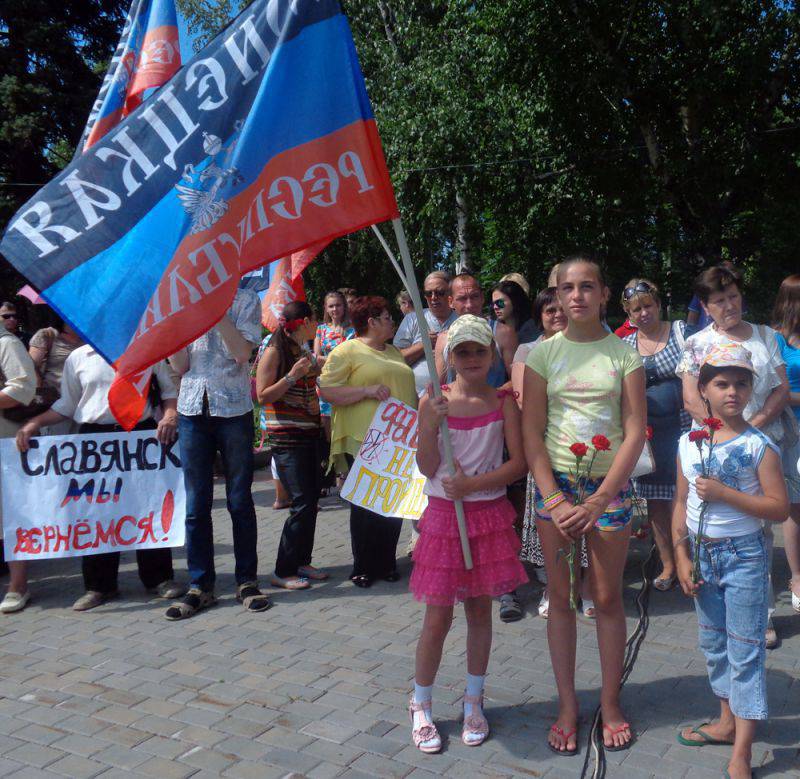 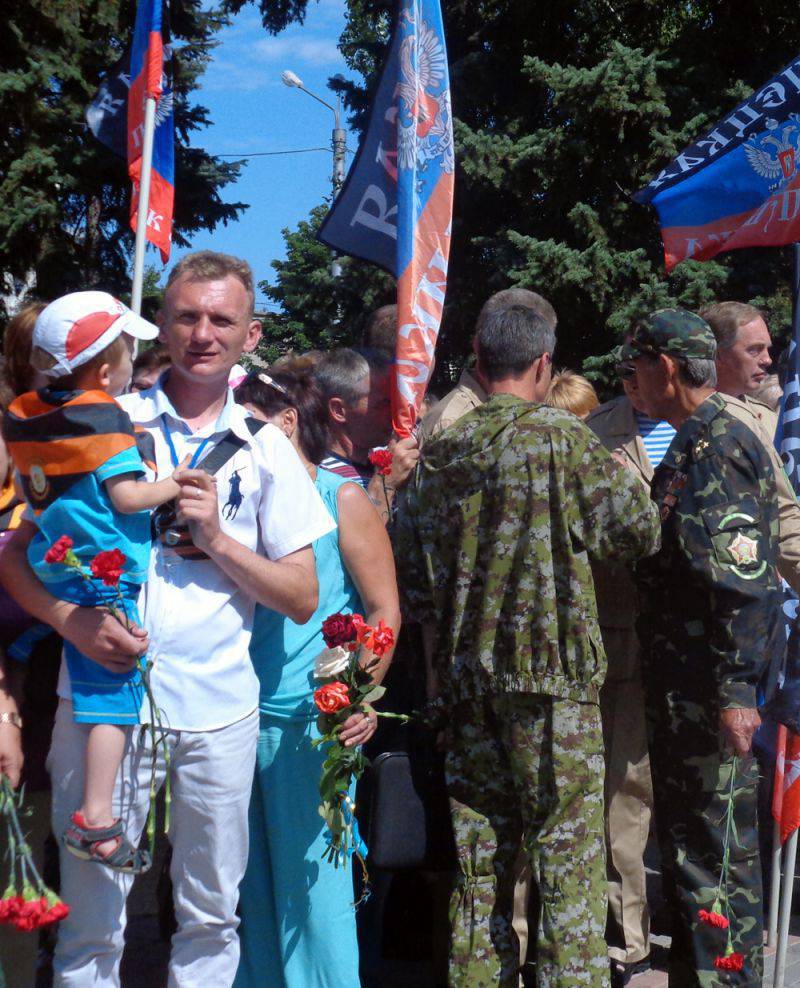 There is a lot of controversy about the correctness or incorrectness of Igor Strelkov’s decision to leave the environment. But this is not important. The main thing is reality: a fairly significant territory of Donbass was under occupation, but the lives of hundreds of fighters were saved, which then fought valiantly on other sectors of the front. 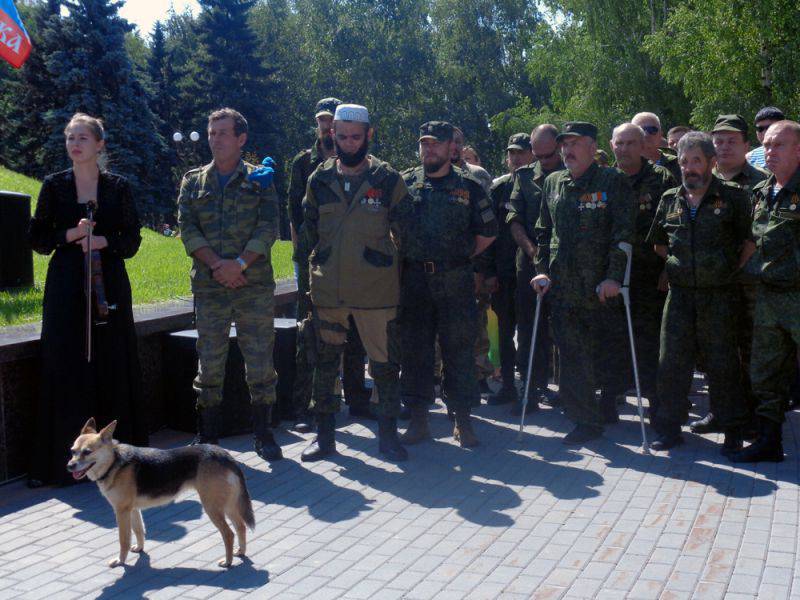 Participants in the mourning rally held posters: “Slavyansk is the DNI”, “Slavyansk, we will return”, “We remember those who died in Slavyansk”. 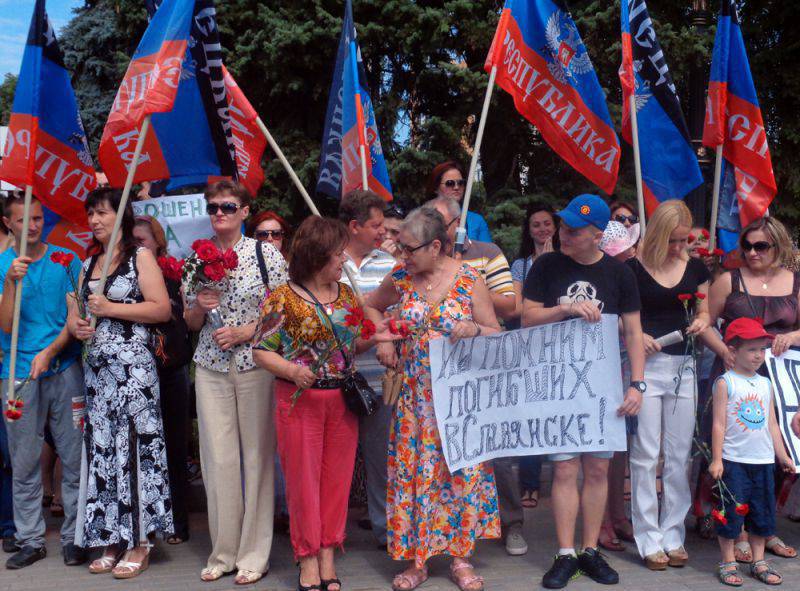 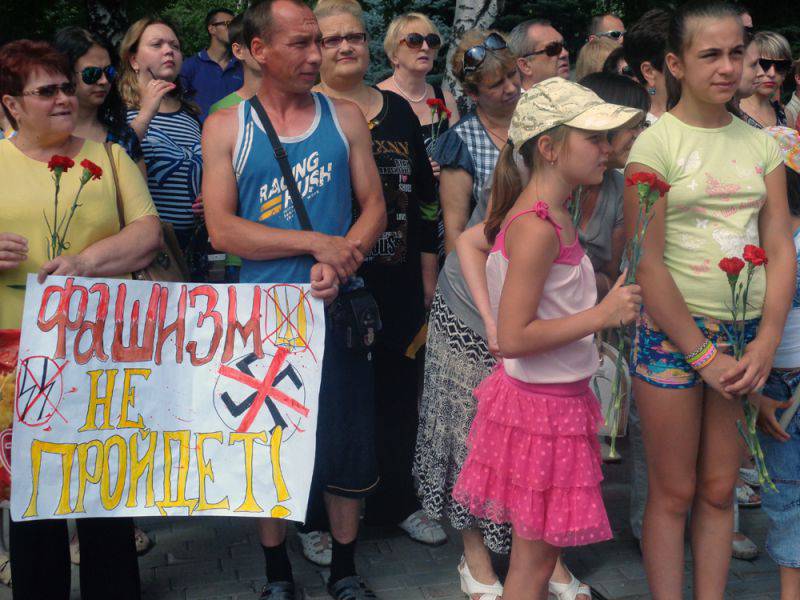 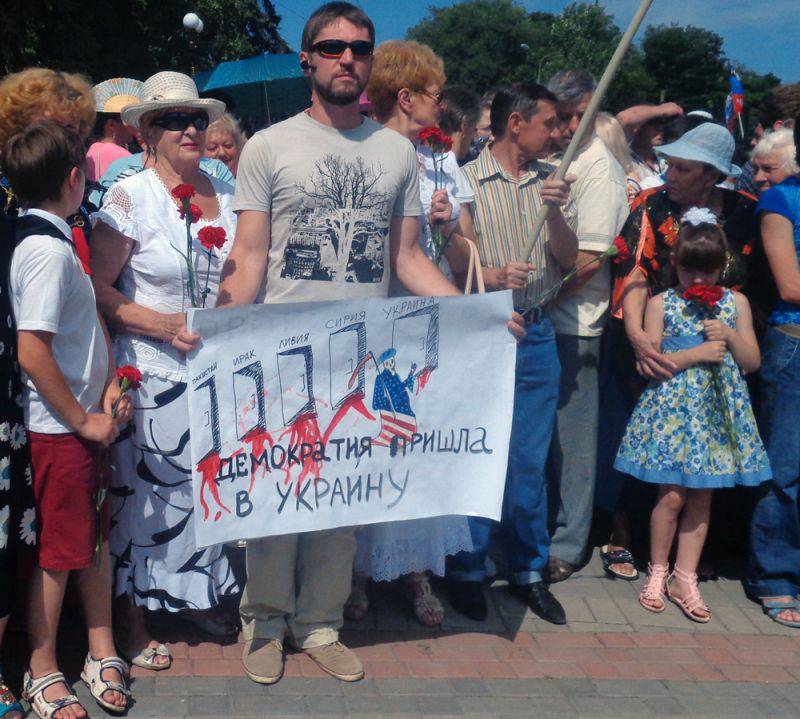 On some posters - well deserved tough evaluation of active representatives of the junta, as well as its external patrons. 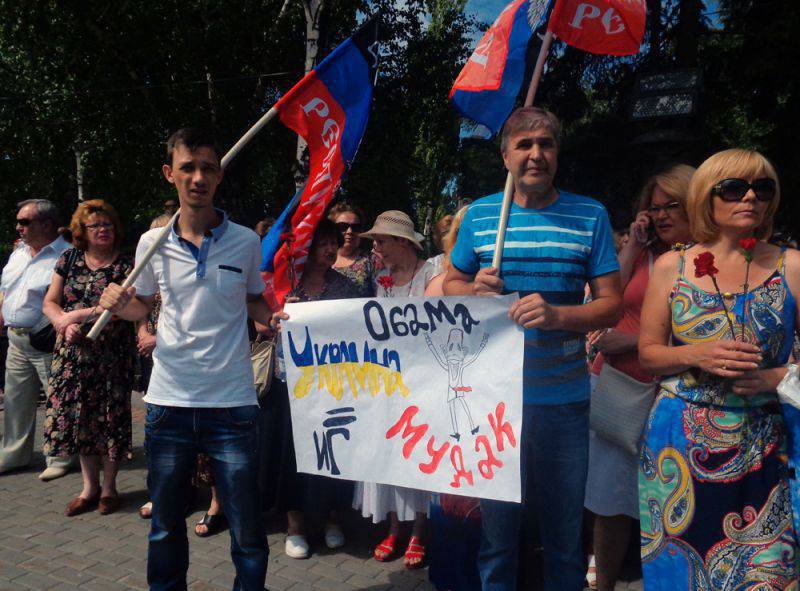 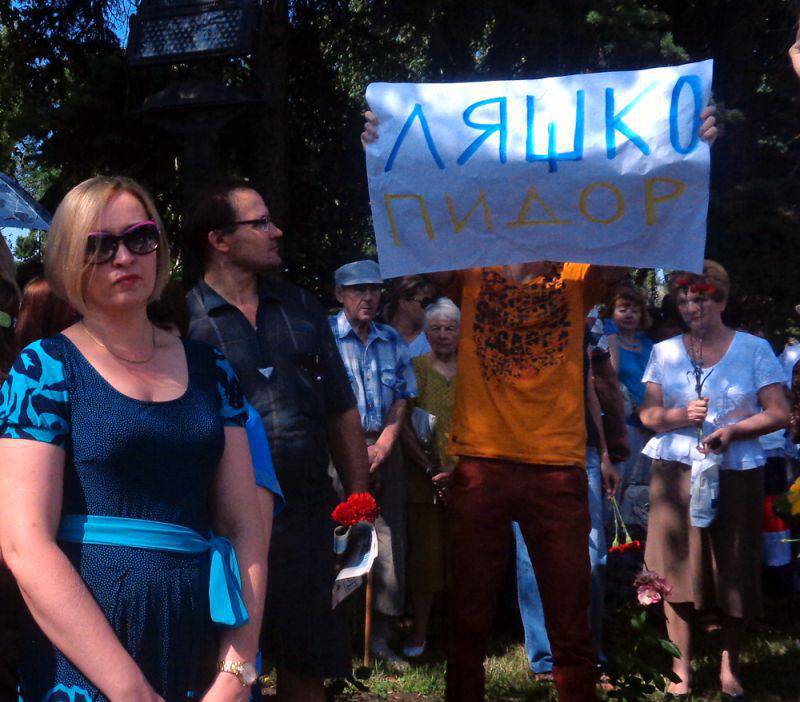 Speakers at the rally noted that everything was for the first time in Slavyansk: the first liberation of the city by the militia, the first siege, the first blockade and the first retreat of the troops of the Donetsk People's Republic. Despite the shelling, a referendum was held there, and the majority of residents voted for independence. For three months, fierce battles were fought outside Slavyansk, during all these months people were under constant blows from the punitive junta, they had no water, no light, no connection. Slavyansk became the same symbol of Russian resistance, resilience and courage, like Stalingrad, Brest, Sevastopol ...

Denis Pushilin, deputy chairman of the People’s Council of the DPR, said: “Our associates, our countrymen took in hand weapon - someone with experience, and someone - directly from the mine and the plant. They acted mainly on a whim, for they understood perfectly well: if not us, then who? .. There was a difficult period when everyone woke up with thoughts: what was happening in Slavyansk? Of course, we supported him and placed great hopes ... The guys who stood up to protect Slavyansk, who fought, not sparing their lives and health, will remain heroes for centuries. We must do everything possible so that Slavyansk and other cities where the referendum was held, become again the Donetsk People's Republic. Now we are using a peaceful chance, a political chance, but we are ready for any development of events. ” 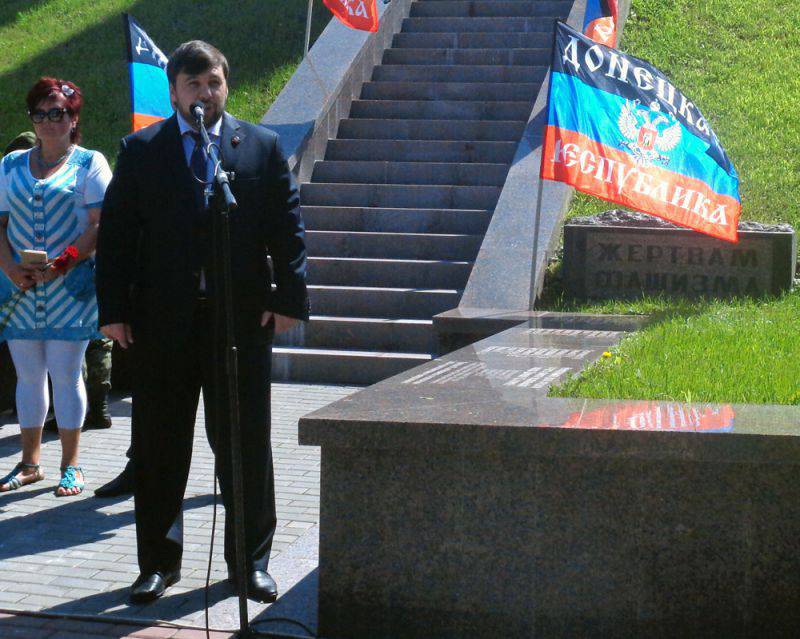 He announced a minute of silence in memory of the fallen heroes and peaceful people. Then a young violinist emerged, and the mournful sounds of Albinoni's Adagio floated above the crowd. 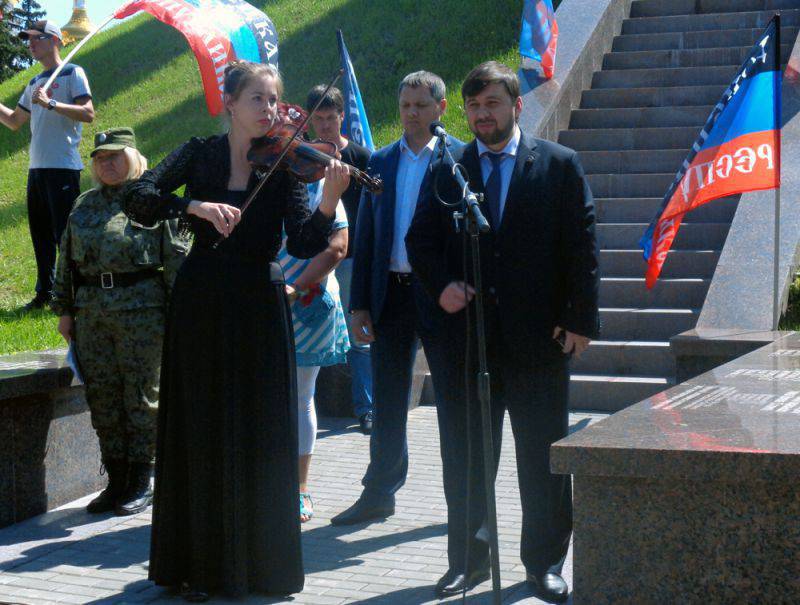 The commandant of the hostel, where refugees from Slavyansk and other cities occupied by ukrocrats now live, said that many of the people who were forced to leave their homes are currently exposed to numerous threats via the Internet. So, the other day, a 12-year-old refugee girl threatened that if she didn’t delete her photos that were not liked by the supporters of ukrorezhim, then she would be found in Donetsk. Then one of the women militia read poems dedicated to the events in Slavyansk.

Valery Skorokhodov, deputy to the People’s Council of the DPR, said in his speech: “On the day when the fascists decided to attack our homeland, Donetsk People’s Republic,” Slavyansk rebelled. He became a fortress and the first frontier of our Republic. It was very hard to fight there ... Many had tears in their eyes - it was hard to leave. With the departure from Slavyansk, we left many cities ... But it was those soldiers who, after leaving Slavyansk, dissolved in various divisions of our army, showed in the battles on all fronts that we would not leave anywhere else. They were an example of courage for untarred fighters, a model of what a warrior and a citizen of our land should be. ”

At the end of the rally, flowers were laid at the monument to the victims of fascism. 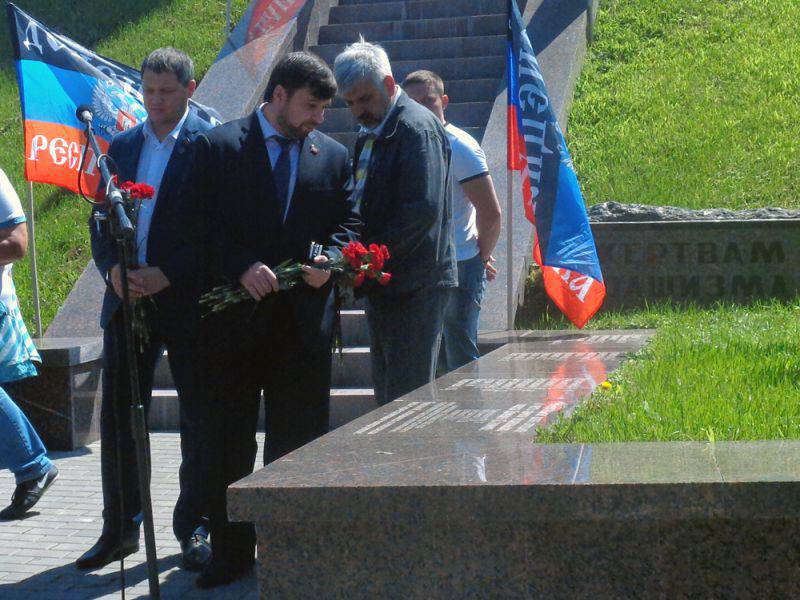 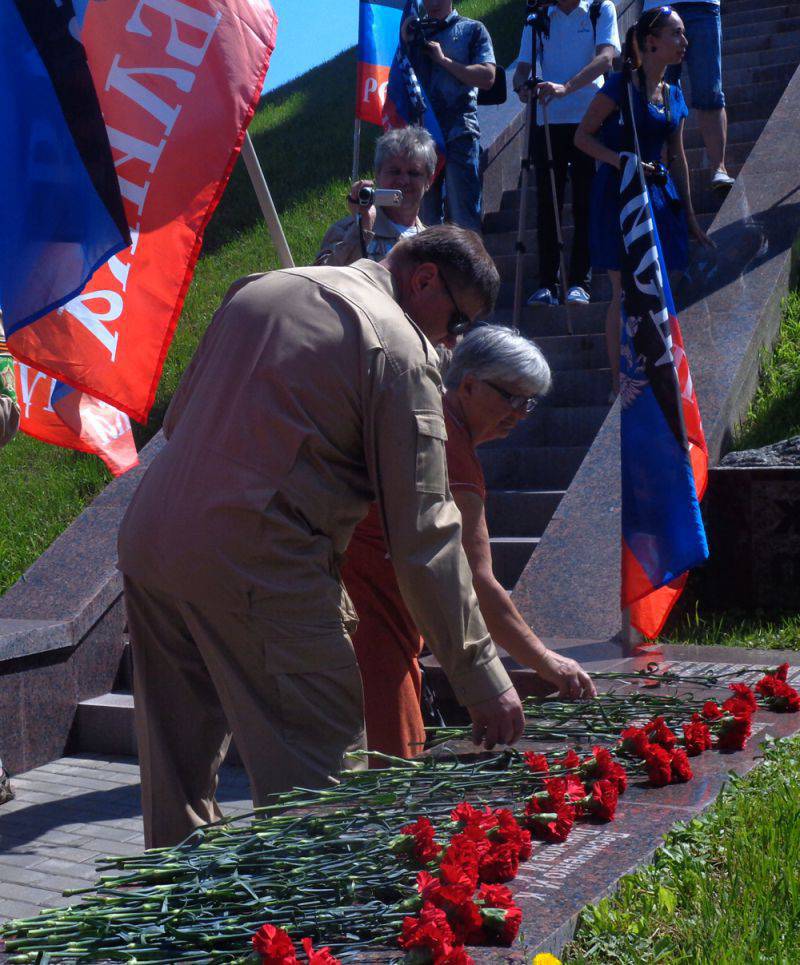 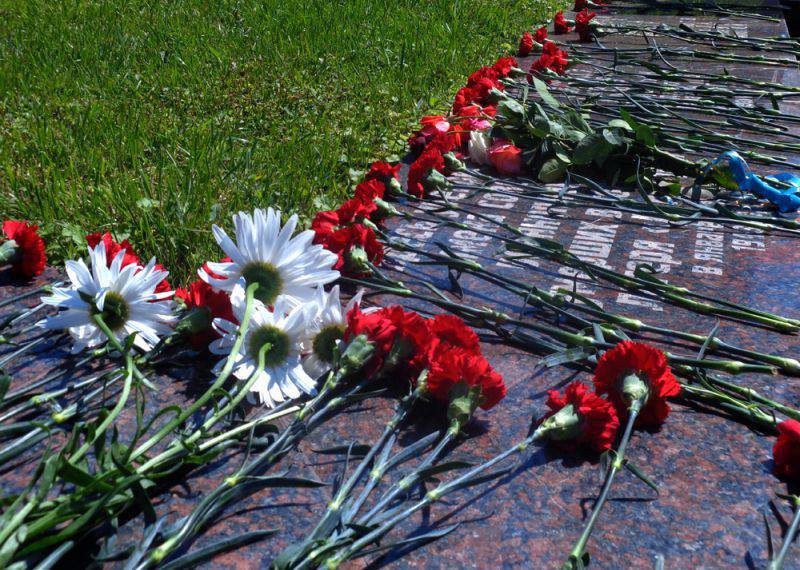 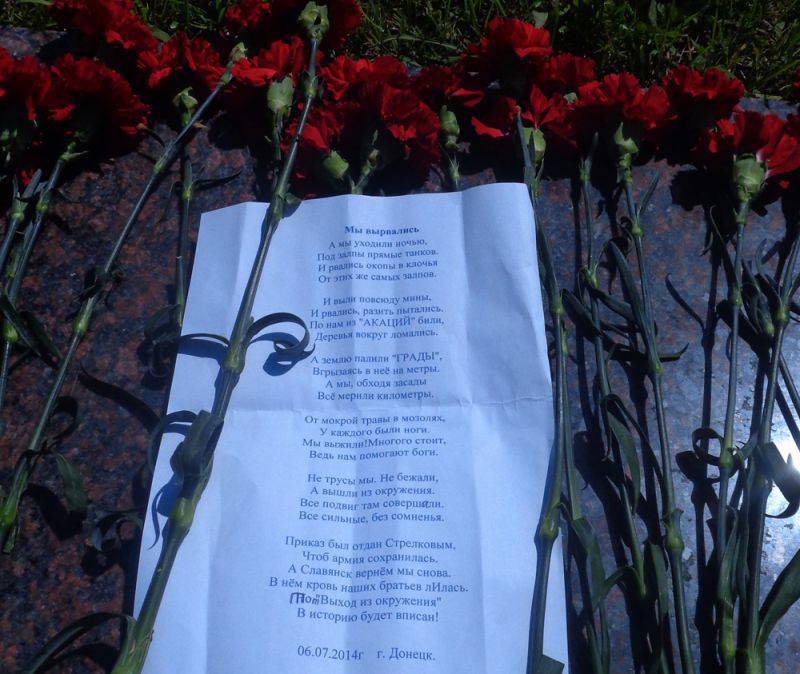 And - in contrast to this action and to the sincere feelings of the residents of the DPR - the junta held its rally in Slavyansk. She marked Pyrrhic “victory”. Particular cynicism was that their rally was held on the mountain Karachun - the one with which for three months, since April 2014, there were brutal shelling of Slavyansk. Residents, who do not want to call themselves for obvious reasons, reported that state employees who were afraid to lose their jobs were driven to the action.

And the junta leader Petro Poroshenko met with the punishers, at which he burst into a statement that a year ago "on this very day the project of the so-called Novorossiya was buried." 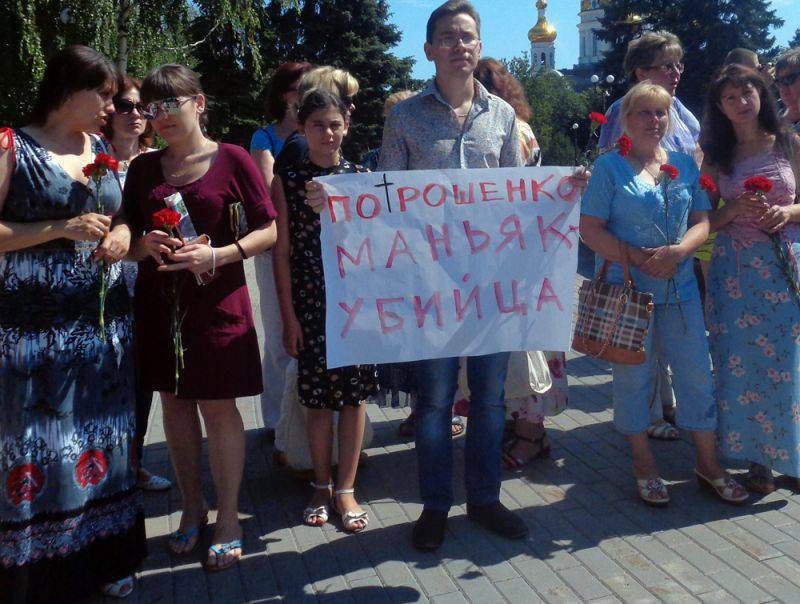 Nothing like this! New Russia, although it has lost a considerable part of the territory, has lost a lot of people, but this year it has considerably strengthened. Yes, so strengthened that now she is too tough for the puppet anti-Ukrainian regime. For more than a year, neither shelling, nor terrorist attacks, nor international pressure can break her.

Speaking of shelling. Punishers celebrated their “victory” not only by a rally in Slavyansk, but also by strikes in the northern regions of Donetsk. In the evening in the capital of the DPR, after a couple of evenings of relative calm, it thundered again. In another way, the junta cannot celebrate its dubious "holiday".