October 20 2011
71
Sources in the National Transitional Council of Libya report that the displaced Libyan leader Muammar Gaddafi was captured during the fighting near Sirte.


The official representative of the NPS reported on the BBC World Service that the interim government of Libya is verifying the seizure of Gaddafi and is not yet officially able to confirm it.

According to him, it is known that in the Sirta region a “large figure” has been captured, which is now being delivered to Misrata. However, it is up to the NPS Special Representative to establish the identity of the captured person.

It is assumed that it will take several hours to confirm or refute the information about the capture of Gaddafi. 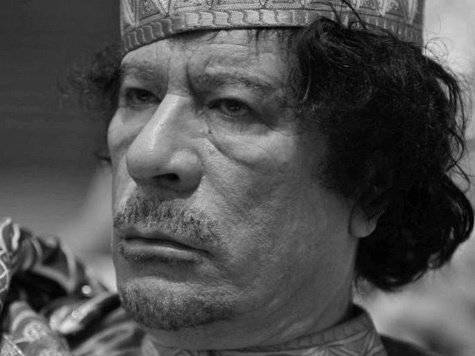 Meanwhile, Reuters reports referring to a high-ranking commander of the NPS troops that Gaddafi died from his injuries. This information is not yet confirmed from other sources.

Earlier, the representative of the NPS, Abdel Majid, said that Gaddafi was injured in both legs.

The news agency Tavasul reports the words of one of the field commanders of the transitional government of Libya, who claims that "the suspected criminal Muammar Gaddafi was captured by one of the revolutionary battalions Misrata, he is sent to Misrata."

Another commander of the NPS units, Mohammed Leit, told AFP news agency that Gaddafi was seriously injured. “He was captured. He is seriously injured, but he is still breathing,” said a representative of the transitional government forces.

Leith noted that he had seen captured Gaddafi, who, he said, was wearing a khaki uniform.

Reuters reports referring to representatives of the NPC that Gaddafi was captured when he tried to leave Sirt in a convoy of cars that came under attack by NATO forces.

After the Libyan TV channels reported on the seizure of Gaddafi, spontaneous celebrations began on the streets of Libyan cities. Car drivers are constantly honking, you can hear the sounds of shots in the air.

Russian President Dmitry Medvedev said at a joint press conference with Rutte that the fate of Gaddafi "must be decided by the Libyan people."

Colonel Gaddafi, who ruled Libya for 42 years, was dismissed in August, when armed NPS supporters took the capital of the country, Tripoli. 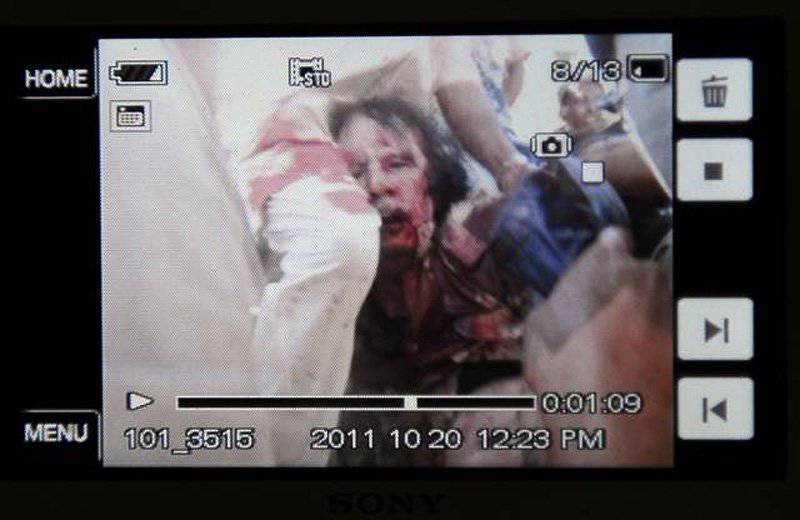 "The reports that NATO footmen are hawking about the capture or death of Muammar Gaddafi are unfounded," said Al-Libiya TV channel. "Gaddafi's health is in order. Statements that Gaddafi is killed or injured are just rumors."

"This is not the first time they are turning to this type of misinformation," added supporters of the overthrown Libyan leader.

Do not confirm reports of the death or capture of Gaddafi, Libyan officials and NATO, the TV channel Al-Jazeera.

Meanwhile, the photo, which probably depicts the dead Muammar Gaddafi, was placed at the disposal of journalists. The picture is published on the website of the British newspaper The Guardian. It shows the bloody body of a former Libyan leader.

The representative of the Transitional National Council of Libya, the new Libyan authorities said that the body of Gaddafi is expected to be delivered to the city of Misurata in the near future. But, according to Reuters, the body of the colonel for security reasons was sent to some secret place.

Earlier today, world media reported the death of the former Libyan leader. According to incoming data, Gaddafi died as a result of injuries in the city of Sirte.

The troops of the Transitional National Council of Libya on October 20 announced the complete capture of Sirte, the hometown of the ousted Libyan leader Muammar Gaddafi. October 17 reported that the rebels captured the city of Bani Walid, located in 170 km southeast of the Libyan capital Tripoli. Bani Walid, along with Sirte, was considered one of the last bastions of resistance by supporters of the ousted Libyan leader Muammar Gaddafi to the new authorities in the PNS.

Mass demonstrations against Muammar Gaddafi, who had ruled the country for more than 40 years, began in Libya in mid-February 2011.

US State Department does not confirm the death of Gaddafi

Muammar Gaddafi captured today in the Sirta district. According to representatives of the Transitional National Council (PNS), the overthrown Libyan leader was wounded in the legs.

According to available information, after the seizure of the PNS detachment by Sirte, the colonel, along with other functionaries of the fallen regime, tried to escape by car from his hometown. Dozens of cars left Sirte and headed west, toward Misurata. After a while, the convoy was attacked. aviation NATO, after which it was overtaken by the formation of the new authorities, which detained Gaddafi. The wounded leader of the Jamahiriya was taken from the place of shelling by ambulance. It is known that several other members of Gaddafi’s entourage were arrested, including the son of Colonel Muatasim and intelligence head Abdullah al-Senussi. During the detention of the colonel, the Minister of Defense of the ousted regime Abu Bakr Eunice Jabr was killed.

Controversial information continues to flow. According to Qatari television channel Al-Jazeera, according to unconfirmed information, Muammar Gaddafi was killed.

The fate of the overthrown Libyan leader Muammar Gaddafi, who was captured today, must be decided by the Libyan people. This was stated by Russian President Dmitry Medvedev.

"Libya should become a modern political state," Medvedev said. "And the Libyans themselves must decide the fate of Gaddafi," the Russian president added.

We are in Yandex Zen
71 comment
Information
Dear reader, to leave comments on the publication, you must to register.