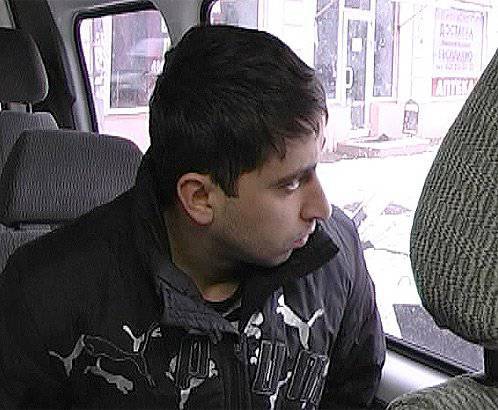 The North Caucasian District Military Court yesterday sentenced Senior Lieutenant David Aliyev and his mother Irina Aliyeva, convicting them of spying for Georgia. According to the FSB, the secret service officer Aliyev was recruited through his mother. The data collected by the officer about the military units she brought to Donetsk on a flash drive, transferring it to Georgian agents. For espionage, the family received $ 5 thousand and long prison sentences.


The case of Senior Lieutenant David Aliyev, who served under the contract in the Southern Military District, and Irina Aliyeva was considered by a military court in Rostov-on-Don in a special order, since both defendants cooperated with the investigation and fully admitted their guilt. Since the case was classified as "secret", it was considered behind the scenes - only the operative part of the verdict was publicly announced yesterday.

The court found the soldier and his mother guilty of espionage activities under Art. 275 CC ("High treason"). According to the investigation, the communications officer collected data on the location, movement and strength of the military group in the territories bordering on Georgia, and his mother delivered this information to representatives of the Georgian special services. According to the decision of the court, David Aliyev will serve a ten-year term in a penal colony, Irina Aliyeva has been sentenced to seven years in a penal colony. In addition, the court ruled that convicts would have to pay their lawyers about 130 thousand rubles. The court also decided to deprive David Aliev of his officer's rank.

A citizen of Russia Irina Aliyeva, a native of the Georgian city of Rustavi, was detained on 5 in January of this year at a bus station in Rostov. As representatives of the military prosecutor's office told Kommersant, by this time David Aliev and his mother were under constant surveillance. After waiting for Mrs. Aliyeva to obtain at the box office a ticket for a regular bus to the Ukrainian Donetsk, FSB operatives took her to the police station. During the search in her bag, they found a USB flash drive wrapped in a handkerchief. Documents that were on electronic media, then served as the main evidence of the defendants' guilt.

As the investigation found out, starting from 2009, Irina Aliyeva traveled to Donetsk several times in order to transfer electronic media to the representatives of the Georgian special services. According to the employees of the military prosecutor’s office, who spent most of the time in Rustavi Irina Aliyeva, the special services recruited “with the help of threats against her relatives”. “It turned out that the officer was recruited through his mother,” a source in the prosecutor’s office added. David Aliyev also met with Georgian agents in Donetsk. He was detained in Rostov-on-Don a few hours after his mother. From his testimony it follows that the Georgian agents paid about $ 5 thousand with his mother for information about the military units. During the search of the house, David Aliev found three hard disks with information about the military units of the Southern District. Yesterday the court decided to destroy these carriers.

The military prosecutor of the Southern District, Vladimir Milovanov, noted at a briefing that his department was quite a verdict. David Aliev’s lawyer Larisa Muntean declined to comment yesterday, citing the fact that she hadn’t read the details of the verdict yet.

Note that this is already the third sentence for Georgian agents in Russia. In August, Lt. Col. Mikhail Khachidze was convicted for six and a half years, 2009, who transmitted information about the troops to Georgian special services. In March last year, Zaza Kherkeladze, an officer of the Georgian special services, and Khvich Imerlishvili and Marlene Bogdanov, lieutenant colonels of the Russian army, were sentenced for espionage and treason, who were appointed 11, 13 and 15 to the colony respectively.

We are in Yandex Zen
The action “Military service under the contract is your choice!” In Rostov-on-Don: future contract servicemen, exhibitions and “Russian Knights”
14 comments
Information
Dear reader, to leave comments on the publication, you must to register.