October 20 2011
21
In 1982, Sweden began work on the development of an armored weapons system of the 1990s. The Swedish military wanted a new MBT and a family of armored vehicles on a single unified chassis. Initially, their plans included the creation of infantry fighting vehicles, armored personnel carriers, fire support vehicles, ZSU, KShM (command post staff), advanced artillery observers, self-propelled mortars, ambulances. The main and priority car in the line was to be a 20-ton BMP, which was distinguished by good armor protection, high maneuverability and fairly strong weapons. The entire family of combat vehicles received the Swedish designation Stridsfordon 90 (Strf 90), but the English / international designation CV90 (Combat Vehicle 90) was most widely used. Subsequently, a light tank / fighter was created on this chassis. tanks CV 90120-T, adopted in 2008.

BMP CV-90 was developed for quite specific climatic and territorial conditions of Sweden. This is a fairly compact and maneuverable machine, which has a rather low silhouette, low radar impulse reflection coefficient and weak thermal radiation in the frontal projection, low noise level and vulnerability to the effects of electromagnetic impulse. In the course of many years of technical research, the Bofors and Högglunds companies have ensured that the vehicle fully complies with all the requirements of the Swedish army:

- high strategic mobility (the possibility of transportation by rail, a large stock of progress); 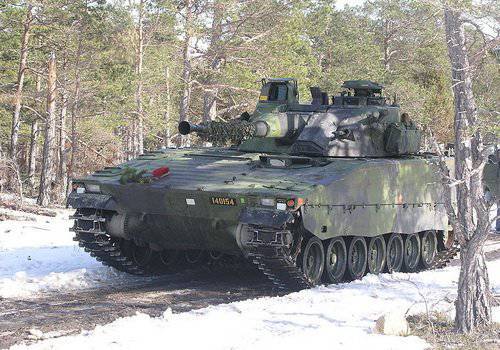 - the ability to fight with armored objects (the use of 40-mm sub-caliber shells with a tungsten core makes it possible to hit almost all armor-type gates, except for the frontal projections of MBT)

- ease of operation (use of cheap spare parts and mechanisms, limited use of electronics, ease of maintenance);

- the possibility of further development and improvement (the possibility of mounting new weapon stabilization systems, new types of armor or reinforcement of weapons without significant changes in the design of the BMP).

BMP CV-9040 uses the classic design scheme. The engine compartment is located in the front of the case on the right. Department of control on the left, the fighting compartment occupies the tower and the middle part of the body, the branch for the landing is located in the rear of the vehicle. The crew of the car consists of 3 people (driver, gunner, commander), troops - 8 people.

The main weapon of the BMP CV-9040 is the 40-mm rapid-fire gun L / 70B manufactured by Bofors, built on the basis of a towed anti-aircraft gun. In order for the gun to be placed in the BMP turret, it had to be turned over, with the ammunition being fed from the bottom, and the spent cartridges were thrown up through the hatch in the roof of the turret. Under the breech of the gun there is a shop divided into 3 separate compartments into which 8 shells are placed. Depending on the tactical situation, each compartment may contain a certain type of ammunition, the replacement of one type of ammunition by another is carried out using a special hydraulic device. The total ammunition of the gun is 240 shells. A machine gun of the 7,62 mm caliber, located in a separate embrasure in the corner cut-out of the turret, is paired with a cannon, its ammunition load is 2000 cartridges. 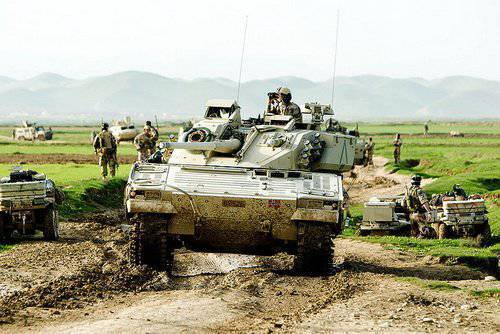 BMP CV 90 Norwegian Army in Afghanistan
The commander guides the gun in a horizontal plane and firing with the handle, which in its shape resembles a joystick. The angle of inclination of this handle affects the speed of rotation of the turret, pressing the appropriate button on the appropriate button selects a weapon - a cannon / machine gun, pressing the index finger activates an electric trigger. Thanks to this control model, all the basic functions are performed fairly accurately and quickly.

The universal MSA was developed by Bofors Aerotronics. It includes the MYBOF universal ballistic computer, the Simrad Nd-YAG LV-401 laser range finder, which has a range from 200 to 9990 meters and an accuracy of ± 10 meters, as well as a complex of various sensors.

The 14-cylinder diesel engine with intermediate air cooling and DS14 turbocharging manufactured by Saab-Scania is used as a power plant. The engine develops maximum power in 550 hp. at 2200 rpm and forms together with the automatic transmission X300-5 a single monolithic block. This transmission provides the 4 machine with forward gears and 2 gear back. With such a transmission and engine, the BMP is able to reach speeds up to 70 km / h when moving forward and to 43 km / h when moving backwards. From a spot to 30 km / h, the car can accelerate in 7 seconds. Access to the transmission and the engine provides a removable sloped plate, which serves as the roof of the MTO.

In 1998, the Swedish company BAE Systems Hagglunds presented in Paris its new development - the light tank / tank destroyer CV90120-T, created on the basis of the modified BMX CV90 chassis. A modified three-seat turret from a Swedish tank destroyer Ikv-91, armed with an 120-mm smooth-bore cannon, also locally produced, was mounted on this chassis. The first prototype was built in the middle of the 1998 year, and at the end of the year, the first firing was carried out. 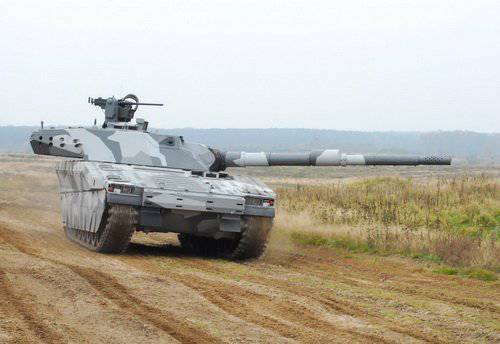 Light tank CV 90120-T
The first demonstration model of the tank was equipped with 105-mm rifled gun TML105 of Nexter Systems, but as a result, the developers opted for the 120-mm smooth-bore gun L50 produced by the Swiss company RUAG Land Systems and an 7,62-mm machine gun coupled with it. This tool was developed by a Swiss company specifically for installation on small and light armored vehicles. In order to reduce the impact it is equipped with a muzzle brake. To improve the accuracy of firing, the barrel of the gun is placed in a special insulating casing. For purging the barrel from the powder gases after the shot an ejector is used. In addition, there is also a barrel bore system. The gun has a stabilization in two planes. The main reason for installing the 120-mm gun was the desire of Swedish engineers to combine the mobility of a lighter combat vehicle with the tank's firepower. Combat weight CV90120-T is only 35 tons, while modern Western MBT weighs almost 2 times.

In the aft part of the three-seater turret of the CV90120-T tank destroyer is a semi-automatic loader for 12 shots. When used, the gun’s rate of fire can reach 12-14 rounds per minute. The rest of the ammunition (another 33 shot) is located in the stern of the hull and can be quickly loaded into the tower through a special aft door.

Possessing such solid armament, the light tank CV90120-T is comparable in firepower to the main German battle tank Leopard 2, while possessing a mass of 35 tons and a much better tactical and strategic mobility. A full gun ammunition consists of 45 shots, of which 12 is initially ready for shooting, and 33 are located on special racks. For comparison, the full ammunition of the tank Leopard 2 42 is shot.

This light tank has a layout with a front arrangement of logistics and drive wheels, which is due to the fact that its chassis is a further development of the CV9040 BMP chassis. For placement in the stern of the car, the new three-seater chassis tower was slightly modified, while booking the frontal projection was strengthened. 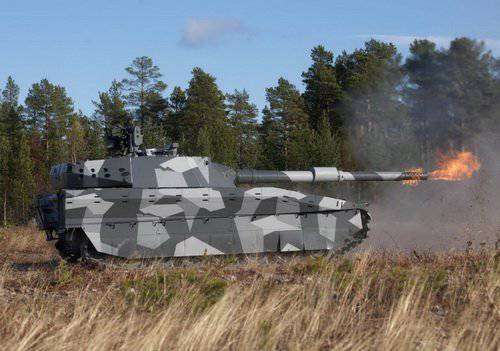 Light tank CV 90120-T
The armor of a light tank in the frontal projection of the turret and hull is able to protect the crew from armor-piercing 30-mm projectiles, and also provides anti-bullet protection (up to bullets of 12,7 caliber mm) in all projections. In addition to the main armor and a special aerosol system for countering guided weapons induced by a laser beam, the tank has an active defense system, which was developed for the Swedish army by German designers from IBD Diesenroth Engineering together with the Swedish company Akers Krutbruk. The exact data of the modules of this active protection system has not yet been disclosed. It is only known that the system consists of a number of sensors and an interception system and can be used both to protect the upper and lateral surfaces from the effects of armor-piercing projectiles and cumulative rockets.

New active armor, according to the developers, provides the car with better protection from guided missiles. Additional side screens reduce the signature of the car in the infrared field. In addition, the tank received a traditional camouflage paint for military operations in urban environments. Active armor, according to the developers, is an “improved active protection system” that is able to detect, identify and eliminate a short-range threat.

The light tanker control system is a universal tank fire control system manufactured by SAAB, which also provides for the possibility of firing at air targets. The LMS consists of 3 independent elements. The gunner has a UTAAS system, which consists of a stabilized day / night vision sight and a laser rangefinder. The commander's OMS is called DNGS, it has almost the same capabilities as the gunner, while the commander's sight can change the multiplicity within 1,5, 6 or 24 times. In addition, there is also a third system of targeting PLSS, which can be used by both the commander and the tank gunner. In this case, the tank commander can independently conduct a search for targets and pass them on to the gunner for further destruction. All members of the crew of the tank have information monitors, united by a common data bus, which allows to increase the efficiency of crew actions in combat conditions. Representatives of the company developed the OMS, claim that its use allows, with a high degree of probability, to hit stationary and mobile targets from the first shot, while the tank has a higher accuracy of shooting than the Leopard 2. 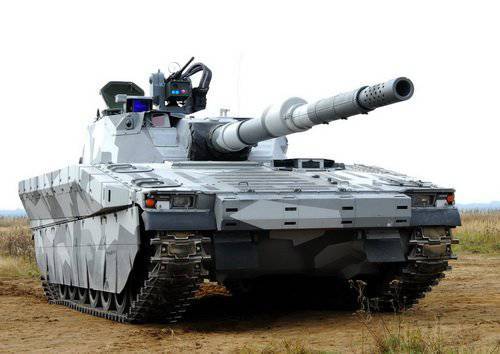 Light tank CV 90120-T
The crew of the light tank consists of a 4 man - commander, gunner, loader (second commander) and driver. The driver's workplace is in front of the hull at the left side, the workplaces of the rest of the crew are in the fighting compartment of the hull and turret of the tank. The commander and gunner are placed to the right of the gun (the gunner sits in front, behind him is a commander just above), the loader is to the left of the gun.

The undercarriage of the CV90120-T light tank includes 7 dual track rollers, front-wheel drive wheels and a steering wheel mounted in the rear of the hull (on each side). The guide wheel is equipped with a hydraulic tensioning mechanism, which is controlled from the driver’s seat. Caterpillars are assembled from single-crib steel tracks equipped with rubber treadmills. Track tracks are connected using rubber hinges. Double-acting hydraulic shock absorbers are mounted on 1, 2 and 7 suspension assemblies of rollers. Suspension of individual rollers torsion.

The engine compartment of the tank, as well as the BMP, is located in the front from the starboard side. It is equipped with a V-8 Scania DI16 diesel liquid-cooled engine, which develops maximum power in 670 HP. The transmission used is the same as on the CV9040, it provides the 4 tank with forward gears and 2 backwards.

Ctrl Enter
Noticed oshЫbku Highlight text and press. Ctrl + Enter
We are
Family BTR-60 / 70 / 80 in combatIs the old well forgotten to become the new? Part-2. By call of honor and duty
21 comment
Information
Dear reader, to leave comments on the publication, you must to register.